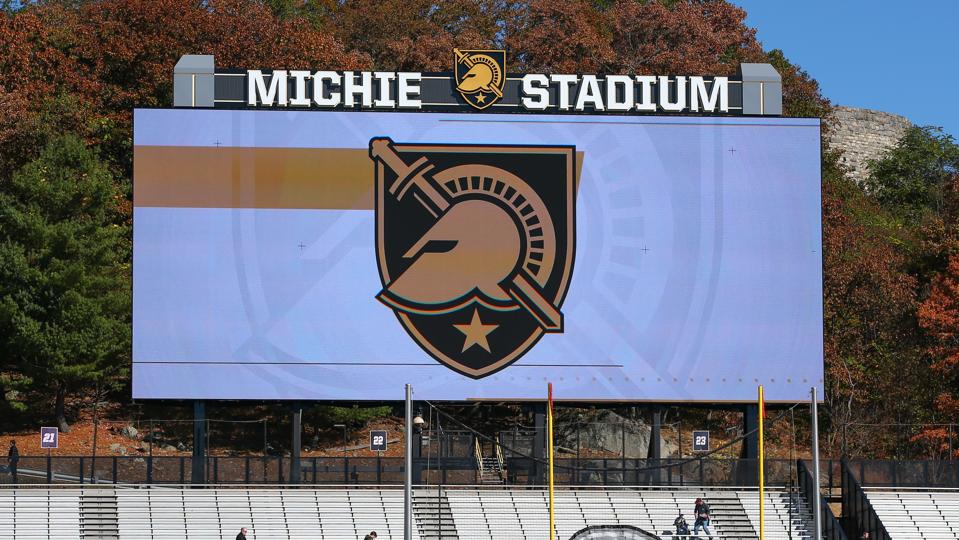 On September 26, Army will host Oklahoma at Michie Stadium for the first time since 1946. The game … [+] will be the back end of a two-game agreement that saw the Black Knights travel to Norman in 2018. (Photo by Rich Graessle/Icon Sportswire via Getty Images)

There is a little more than six months before the 2020 college football season kicks off. However, it is not too early to take a glimpse at the schedule and, in particular, interesting non-conference games.

The 13 games highlighted below include matchups of outstanding young quarterbacks, opportunities for players to build a Heisman resume and battles that are likely to have national championship implications.

This Friday evening matchup between two of the nation’s outstanding young quarterbacks should make for fun viewing. The Tar Heels’ Sam Howell and the Knights’ Dillon Gabriel had superb freshman seasons with the former checking in at 10th nationally in pass efficiency in 2019 and the latter 13th. Howell’s 38 touchdown passes were fourth.

The last time these storied programs met was the 2016 opener in the same venue, a 52-6 ‘Bama rout during what was Jalen Hurts’ collegiate debut. Going against the Crimson Tide defense will be a big test for USC quarterback Kedon Slovis, who as a freshman last season was seventh nationally in pass efficiency. For Nick Saban’s Tide, the game is an opportunity to show that they will once again be in the national title hunt.

Two programs that have met four times in the Rose Bowl will clash for the first time in 18 years. The Wolverines had yet another rough conclusion to a season and the Huskies are coming off a five-loss 2019, so both teams are in need of a nice start. That is especially so for Jim Harbaugh and Michigan, which will likely feature the starting debut of either Dylan McCaffrey or Joe Milton at quarterback. Jimmy Lake will make his head-coaching debut for UW after serving as Chris Peterson’s defensive coordinator.

This non-conference tilt is most intriguing for who will be on the sidelines at NRG Stadium. Lane Kiffin gets a stiff test in his debut as the Rebels coach and Dave Aranda, who was the nation’s highest-paid assistant as the defensive coordinator at national champion LSU, took over the Bears after Matt Rhule departed for the NFL.

The early-season encounter between these teams in 2019 was an entertaining slugfest with the Tigers prevailing in Austin, 45-38. Joe Burrow and Sam Ehlinger combined to throw for 872 yards and eight touchdowns. The former won the Heisman and has moved and the latter returns for his senior season and will be looking to build a Heisman resume against the defending national champs, who will likely turn to Myles Brennan at quarterback.

You have to hand it to the Tar Heels for their non-conference scheduling. Mack Brown’s team opens in Orlando against UCF and eight days later takes on the Tigers at Mercedes-Benz Stadium in the Chick-Fil-A Kickoff. A week after going up against Dillon Gabriel at UCF, Sam Howell’s opposite number in this game will be yet another quarterback who impressed as a freshman in 2019: Bo Nix. Howell will be a good test for an Auburn defense breaking in a couple of new starters on the line.

The front end of a home-and-home has Ryan Day’s Buckeyes traveling to Oregon. Ohio State’s only previous trip to Eugene was 1967, a 30-0 Buckeyes win in what was the first season of Autzen Stadium. Ohio State is 9-0 all-time against the Ducks and this could be a nice early-season Heisman-momentum building game for Justin Fields. Oregon will have a new offensive coordinator in Joe Moorhead and a new starting quarterback, possibly Tyler Slough.

Imagine the atmosphere in Lane Stadium in the minutes leading up to kick off. While the Hokies closed last season by losing in the regular-season finale to Virginia and in the Belk Bowl to Kentucky, optimism is high in Blacksburg following an 8-5 season that included a couple of visits to the top 25. The visit from the Nittany Lions will serve as quite a test considering James Franklin’s team has won at least 11 games in three of the past four seasons and will likely knock on the CFP door once again. 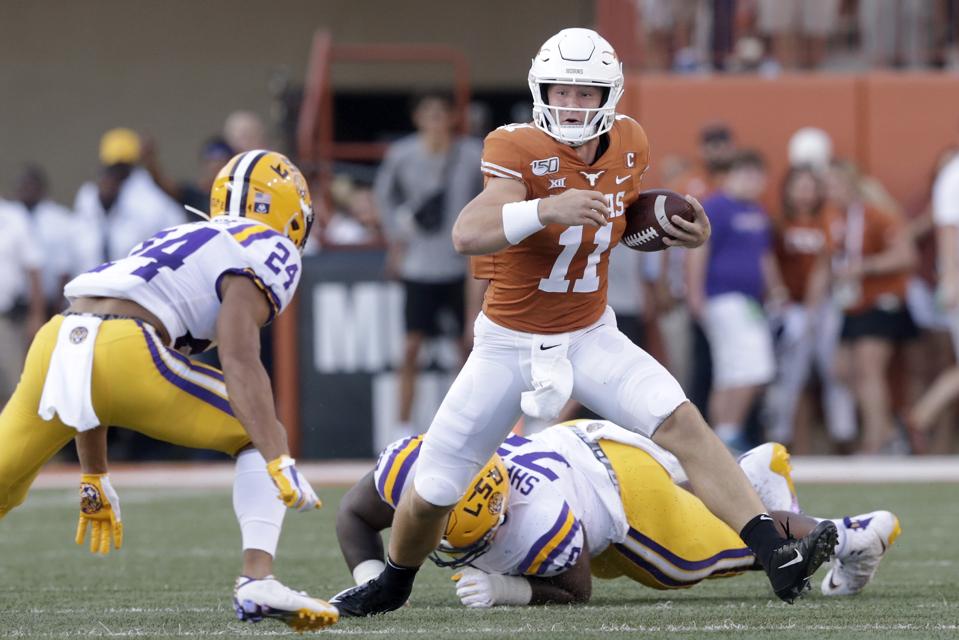 Sam Ehlinger and the Texas Longhorns will play at LSU on September 12 in what is likely to be one of … [+] the top non-conference games of 2020. (Photo by Tim Warner/Getty Images)

The Seminoles and Broncos will complete their two-game series a year after Hurricane Dorian forced the teams to play their season opener in Tallahassee instead of Jacksonville, where FSU had moved the game to play in front of its many alumni and fans in that city. Boise State will go for the sweep, and yet another win against the Power Five, after coming back from an 18-point deficit in last season’s contest. Mike Norvell is now in charge of the ‘Noles and this trip will be a good indicator of where the program is early in his tenure and right before the ACC schedule kicks in.

When the Black Knights traveled to Norman in 2018 — and lost to the Sooners in overtime — it marked the first time the teams met since 1961 at Yankee Stadium. This meeting, the fifth between the teams, will be played in West Point. Due to renovations at Michie Stadium, there was some thought the game might be played at Yankee Stadium or MetLife Stadium in the Meadowlands, venues Army has played at in recent years. Last spring, it was confirmed the game would be played on the banks of the Hudson where the teams met in 1946 when Bud Wilkinson was an OU assistant and Red Blaik commanded the Army sideline.

With a lot of talent returning on a team that won 11 games, Luke Fickell’s Bearcats could very well be in the mix for a New Year’s Six bowl. Beating the Cornhuskers in Lincoln would certainly help that cause. Meanwhile, if Scott Frost’s team is going to turn the corner in 2020, this is a game it needs to have.

The Shamrock Series comes to Lambeau Field, where the asking price for lower level seats is approaching $3,000. This prime time matchup will be the first of a two-year deal between the schools, who last met in 1964 and will play at Soldier Field in 2021. For the Badgers, this game is sandwiched between a trip to Michigan and a visit from Minnesota. For Brian Kelly’s Irish, this game would seem to be the biggest potential speed bump prior to meeting Clemson. Speaking of which….

College Football Playoff implications could hover over South Bend when these teams meet. While last season is last season, six of the Tigers’ first eight opponents in 2020 were sub-.500 in 2019 and Dabo Swinney’s team could very well enter this game 8-0. The Irish, whose schedule the first two months is far from imposing, could also come in 8-0. Regardless, Trevor Lawrence vs. Ian Book is sure to generate plenty of attention.

These Great Companies Are Leaning In To Combat...

4 Tips For Job Searching Over The Holidays

Cultivating A Culture For Digital Transformation Starts By...