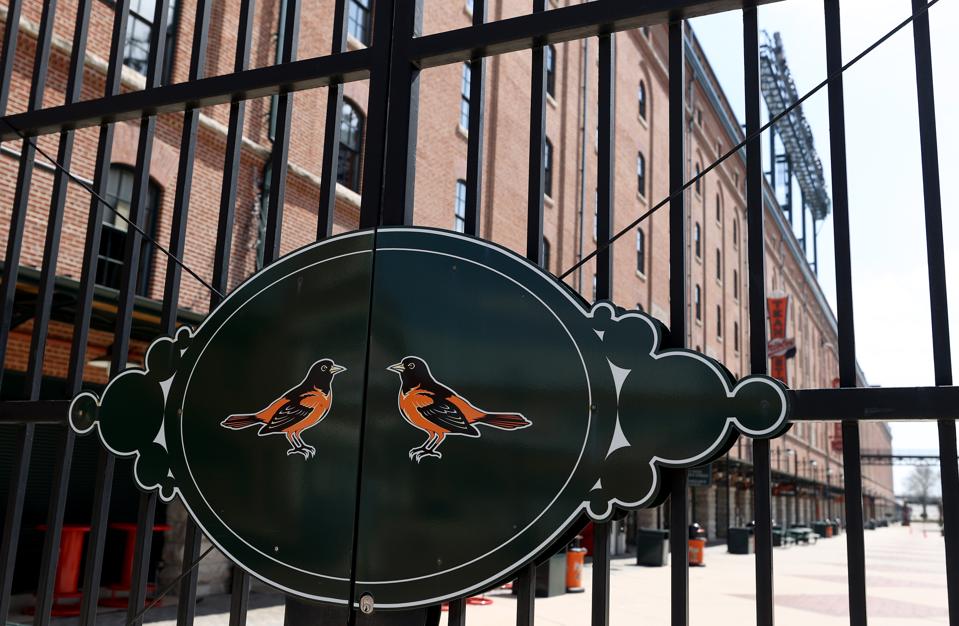 BALTIMORE, MARYLAND – MARCH 26: The closed Eutaw Street entrance is shown at Oriole Park at Camden … [+] Yards on March 26, 2020. The MLB season’s start is postponed due to the COVID-19 pandemic. (Photo by Rob Carr/Getty Images)

The weather was beautiful in Baltimore on Thursday — the sun was out with temperatures in the mid-to-high 50s. Winter was continuing to slowly change into spring, and the Baltimore Orioles had been scheduled to open their 2020 season at home against the New York Yankees.

Opening Day is a special time in Baltimore and just about everything else. It is the time when the 162-game, approximately six-month baseball season begins, and most baseball fans universally love it.

Also, it’s a time filled with optimism as fans hope for the best for the teams they love. But even though the Baltimore faithful aren’t expecting a playoff run as the team is in the midst of a rebuild, Opening Day is something most baseball fans enjoy. This year, though, the season did not start on March 26, due to the pandemic. In fact, there’s no official knowledge of when the season is going to begin.

Rob Manfred is the commissioner of baseball and put a message on the the league’s web site talking about missing Opening Day.

“Today is unlike any Opening Day in Major League Baseball’s long history,” his statement said on the Orioles’ site. “We need to call on the optimism that is synonymous with Opening Day and the unflinching determination required to navigate an entire baseball season to help us through the challenging situation currently facing us all.”

Opening Day at Oriole Park at Camden Yards — like at just about every other ballpark — is a special time. The stadium is usually filled; the team runs down to the infield from the bullpen and lines up. It’s something that signals a new beginning. A new season begins. The frustrations of a second 100-loss year will be gone. It’s a new day. It’s a time for optimism and feeling good.

That’s why missing Opening Day hurts Baltimore. This is a city that badly needs something to feel good. There’s things like problems with crime, confusion about what to do to stop it, and baseball would let people forget this for a few hours.

Opening Day also would let those who come to it have fun in a packed and famous ballpark. Also, they could go to the bars and restaurants by Oriole Park and cut loose and have a blast.

It also would make the fans feel great about the Orioles as they started a new phase of their rebuilding effort. This likely is going to be another 100-loss season — or something very close — but on that first day, Opening Day, Baltimore would be 0-0 and taking on the dreaded Yankees.

Nobody knows what’s going to happen with the 2020 season, specifically when it will start or how long it will carry on. Or even what form it will take as there’s even talk of seven-inning doubleheaders and things like that.

At some point though, there should be a beginning to the season, and that’s when fans will be able to enjoy Opening Day, the one originally on the schedule for today. It will be interesting to see if that Opening Day has the same feel as this one would have but only time will tell.

20 Books to Inspire Your Happiest Life at...