Home Business Oscars 2020: The Best Of The Red Carpet
Business

Among the fashion trends that emerged during this year’s awards season is the idea that more is more. From the voluminous Valentino dress with a giant bow that Jennifer Lopez wore to the Golden Globes to Ariana Grande’s grand Giambattista Valli gown at the Grammy Awards to the the always outsize outfits of Billy Porter, celebrities have been coming up bigger and bigger in 2020.

But the Oscars ceremony posed a new complication this year for designers and stars—the Academy Awards were moved up two weeks, right in the middle New York Fashion Week. What that means is that designers were juggling a new collection and custom gowns for the red carpet and after parties. Designer Christian Siriano—a 30 Under 30 lister from 2015—estimated that he and his team created more than 200 looks over the past few months to prepare for NYFW and awards season. “It has been such a struggle to decide which item is more important than the next,” Siriano told Vogue, “because not everything will get done, sadly, so something will get cut one way or the other.”

Tom Ford, meanwhile, came up with a creative solution to the high-stakes conflict—he shifted his New York Fashion Week show to Los Angeles, which insured that he could have A-list celebrities (including Renee Zellweger, Kate Hudson, Miley Cyrus, Jason Momoa, Jon Hamm and Jeff Bezos) in his front row and still be available for Oscars preparation. The move was not without controversy, however, as Ford is the chairman of the Council of Fashion Designers of America (CFDA) and some saw his absence as a betrayal of New York.

So who were the big winners on the 2020 Oscars red carpet? 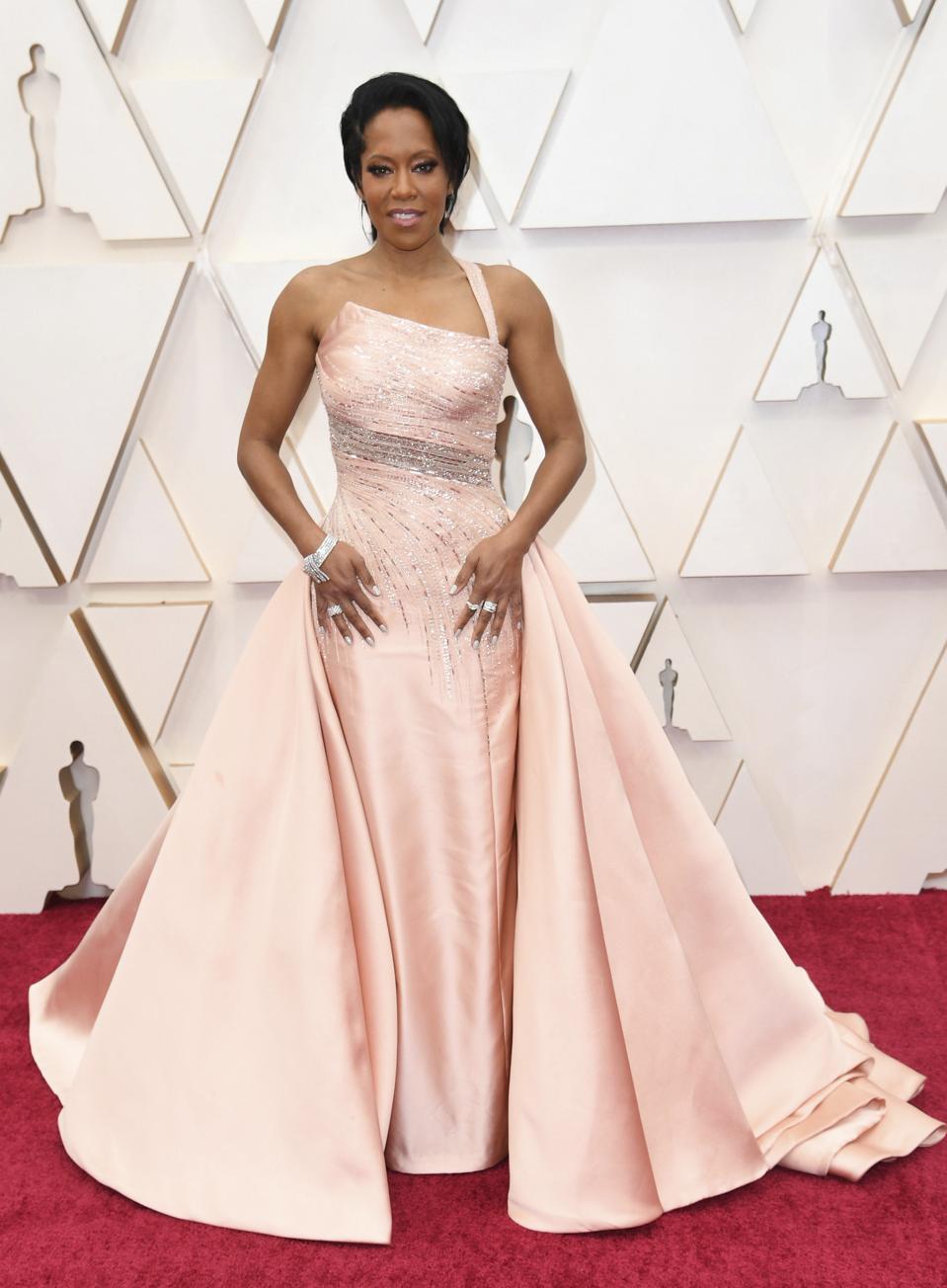 Regina King made a dramatic entrance in a pale pink Versace ballgown and Harry Winston jewelry, while Billy Porter went for the gold in a gilded ensemble by Giles Deacon paired with platform Jimmy Choo heels. 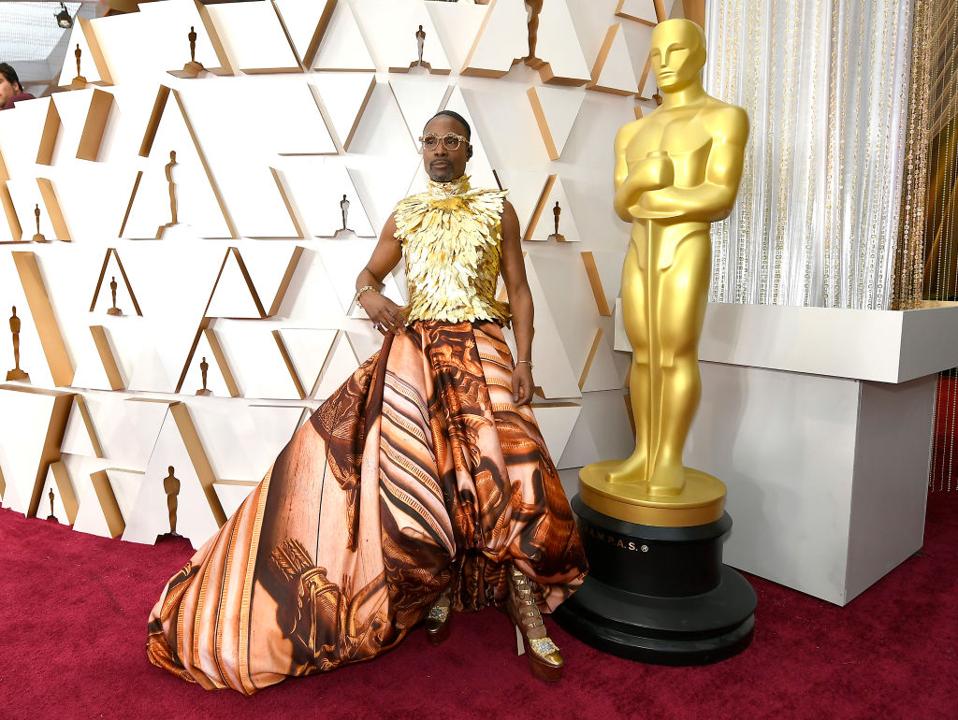 Other stunning sculptural looks included Florence Pugh (in a tiered teal dress by Louis Vuitton), Sandra Oh (in a dreamy Elie Saab gown with prominent shoulders), Saoirse Ronan (in a Gucci dress with a plunging neckline and a peplum waist), Cynthia Erivo (in an asymmetrical Versace gown), and Penelope Cruz (in a billowing black frock by Chanel). 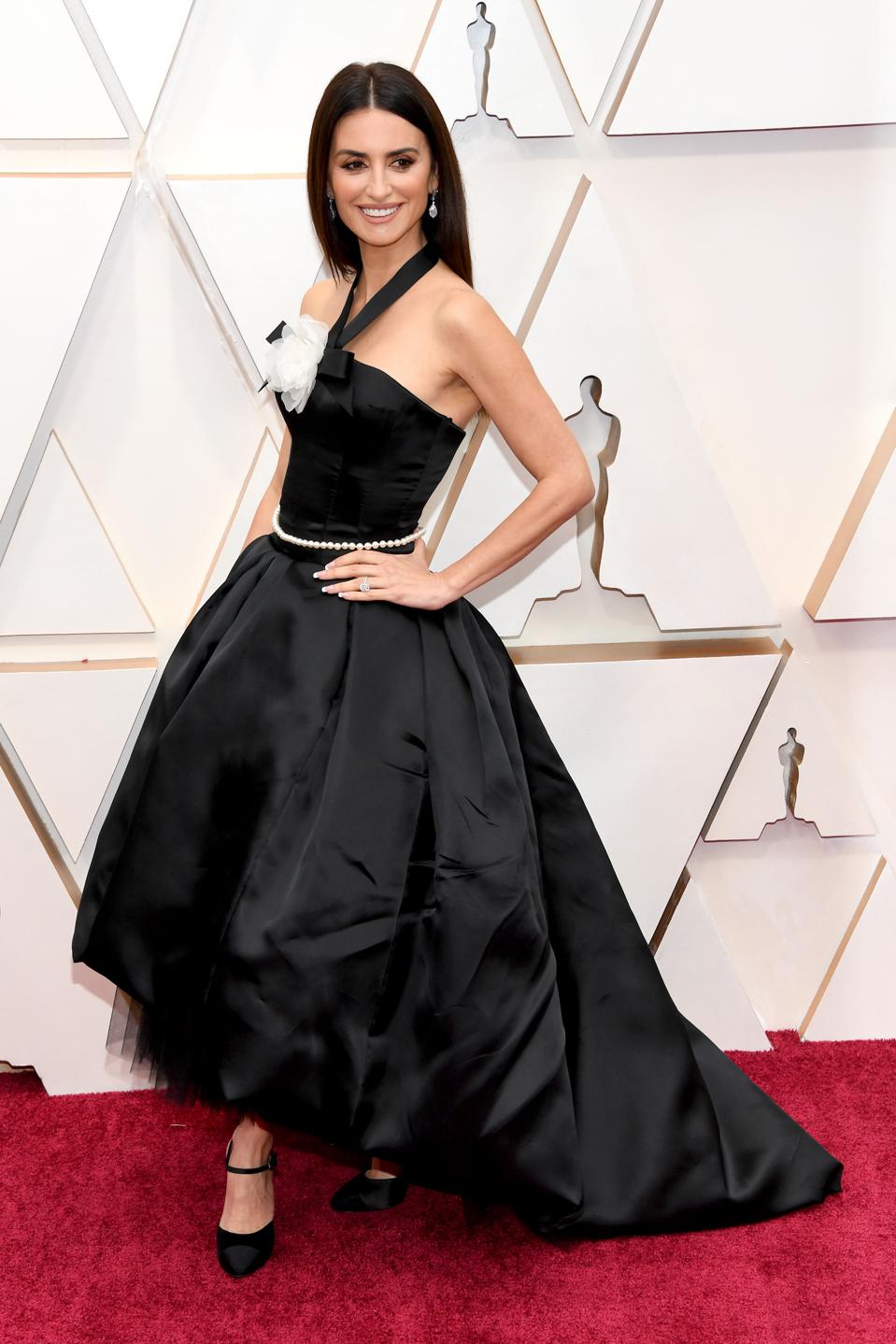 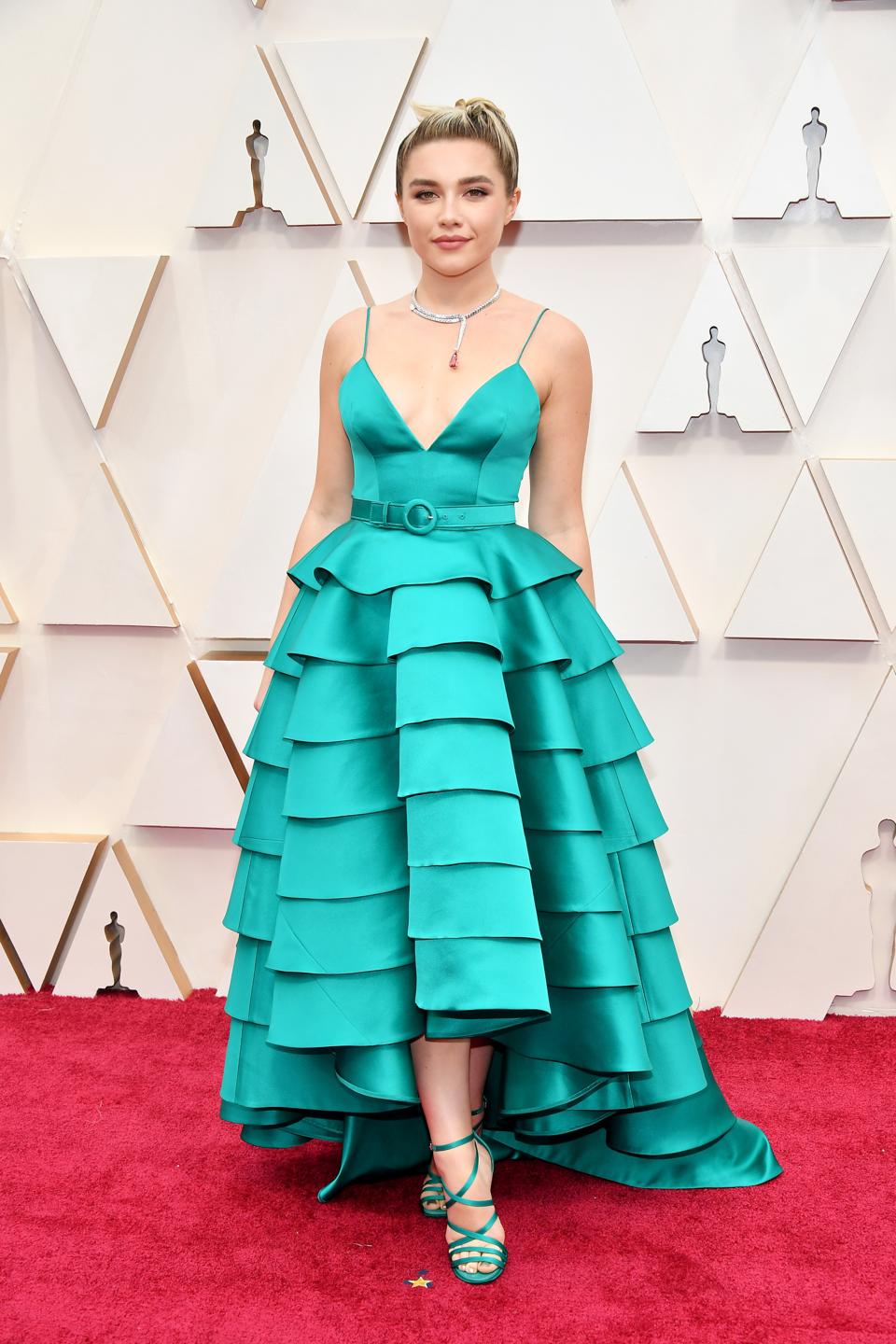 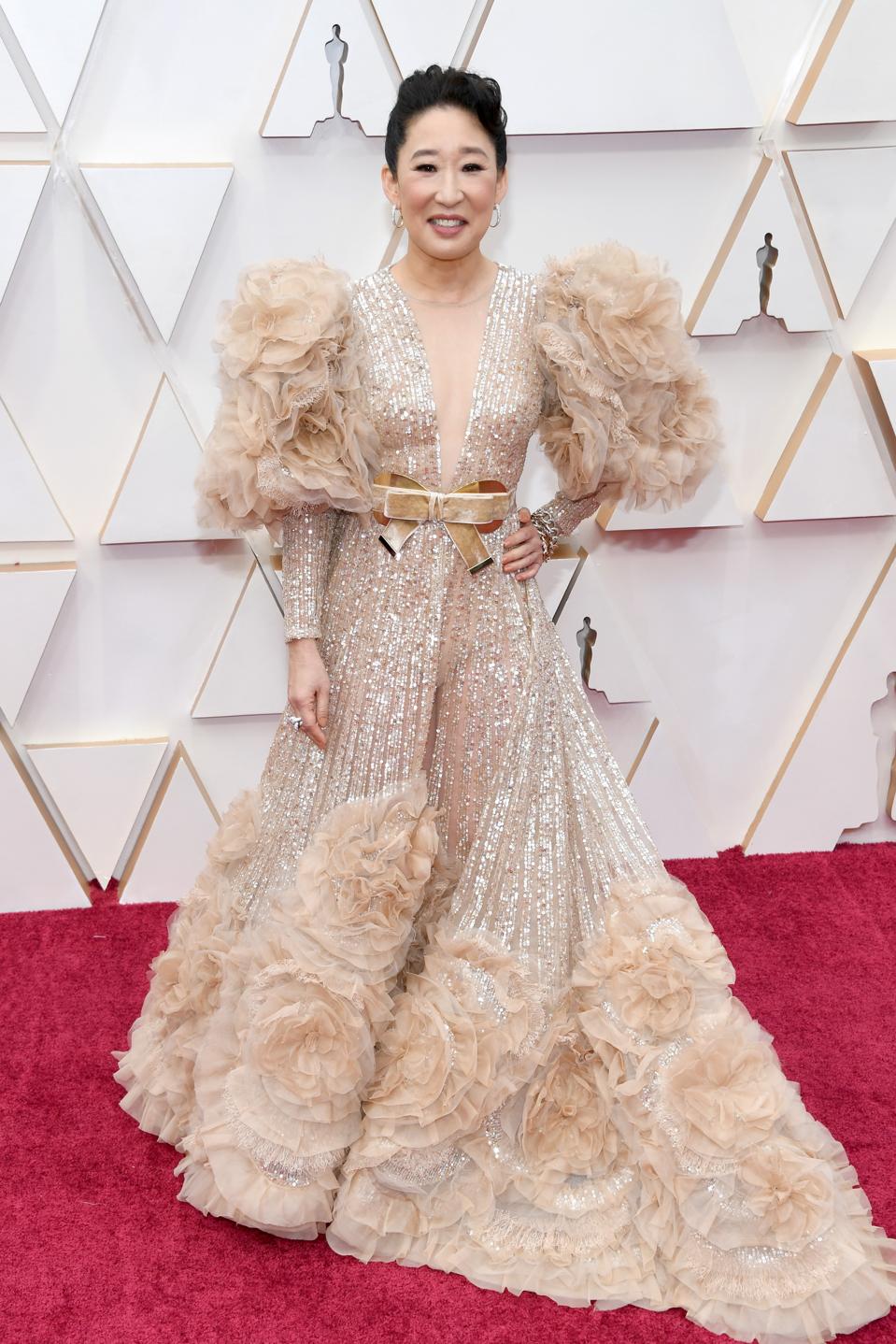 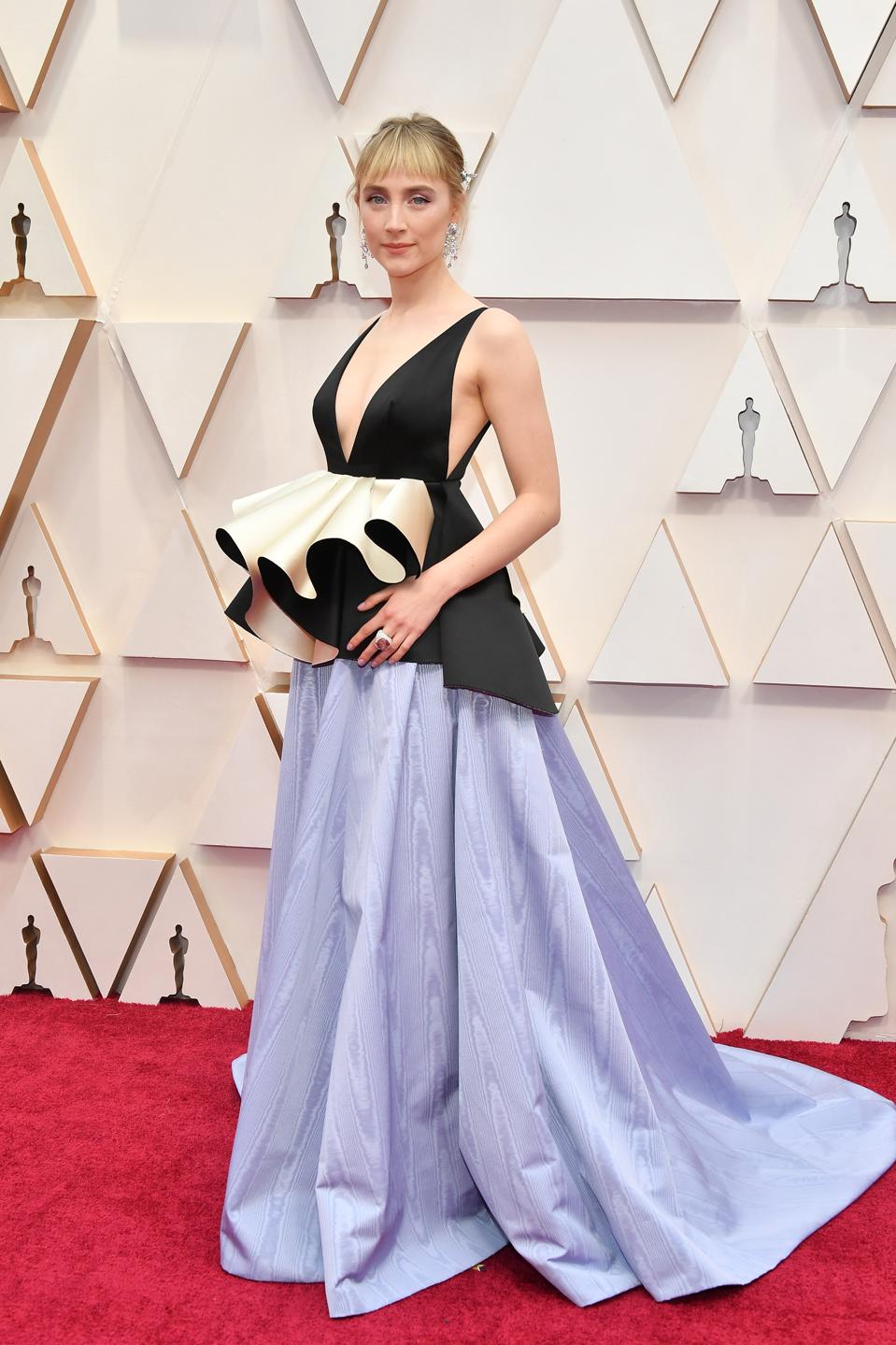 Saoirse Ronan is a vision in Gucci. 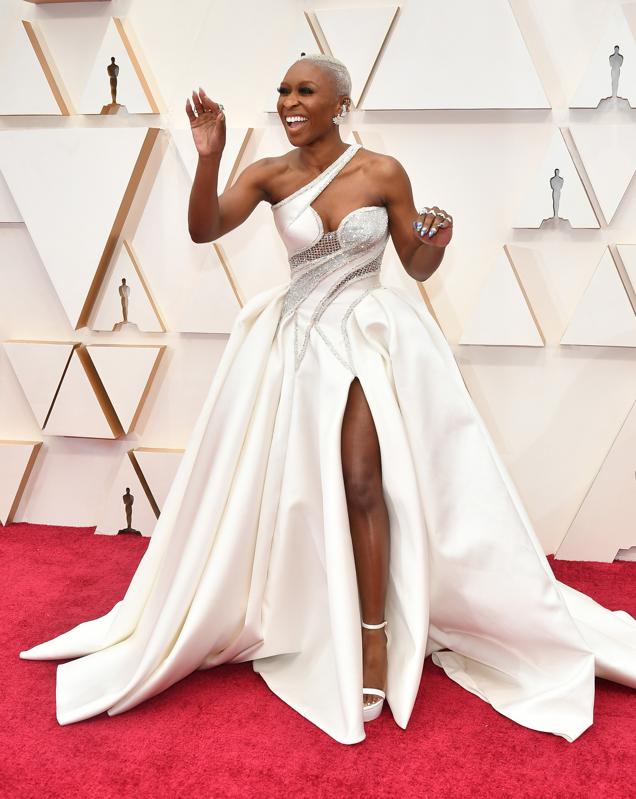 And several stars sizzled in white-hot frocks—among them, Salma Hayek (in Gucci), Billie Eilish (in head-to-toe Chanel) and Renee Zellweger, in a beaded silk gown by Armani Privé. 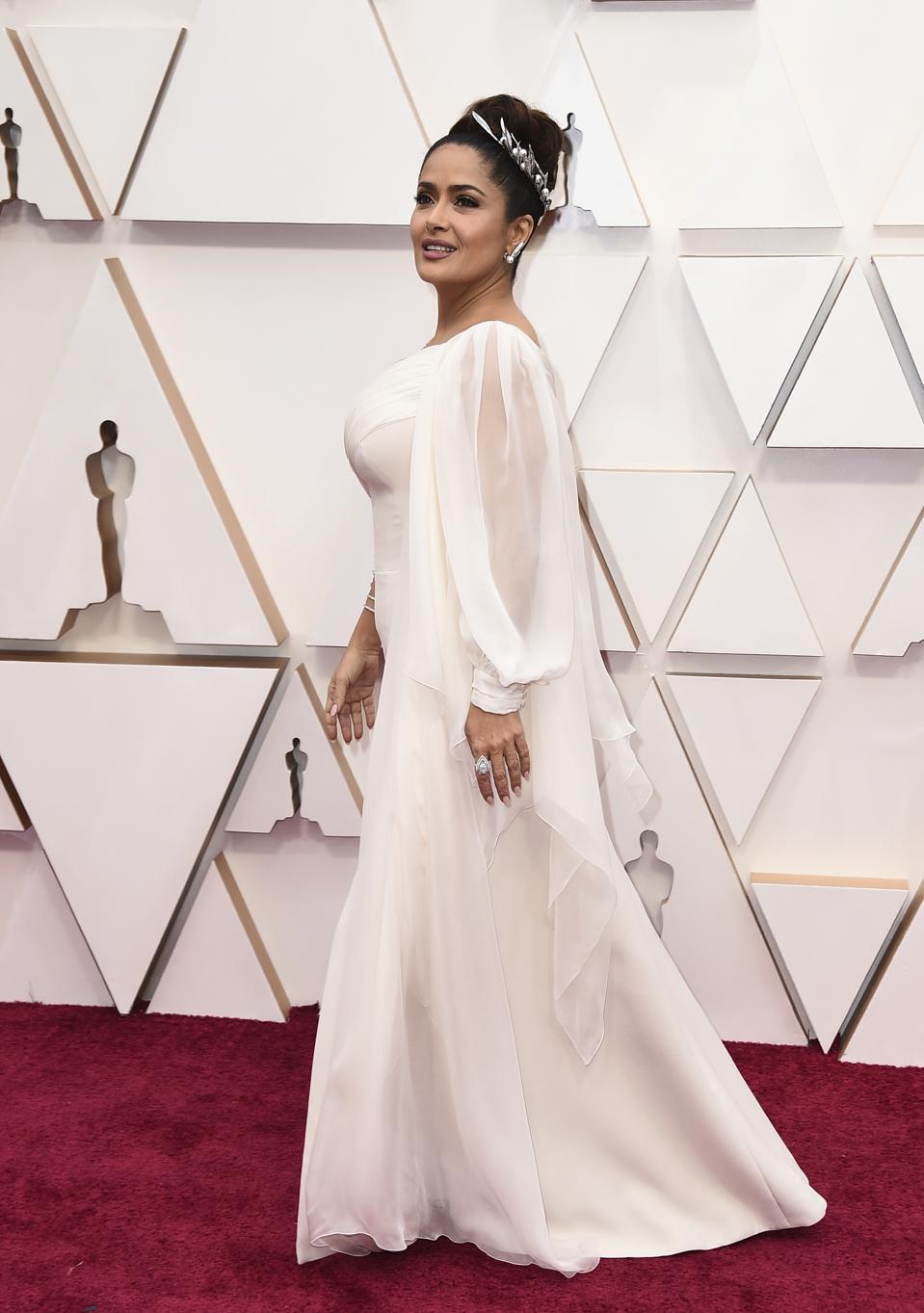 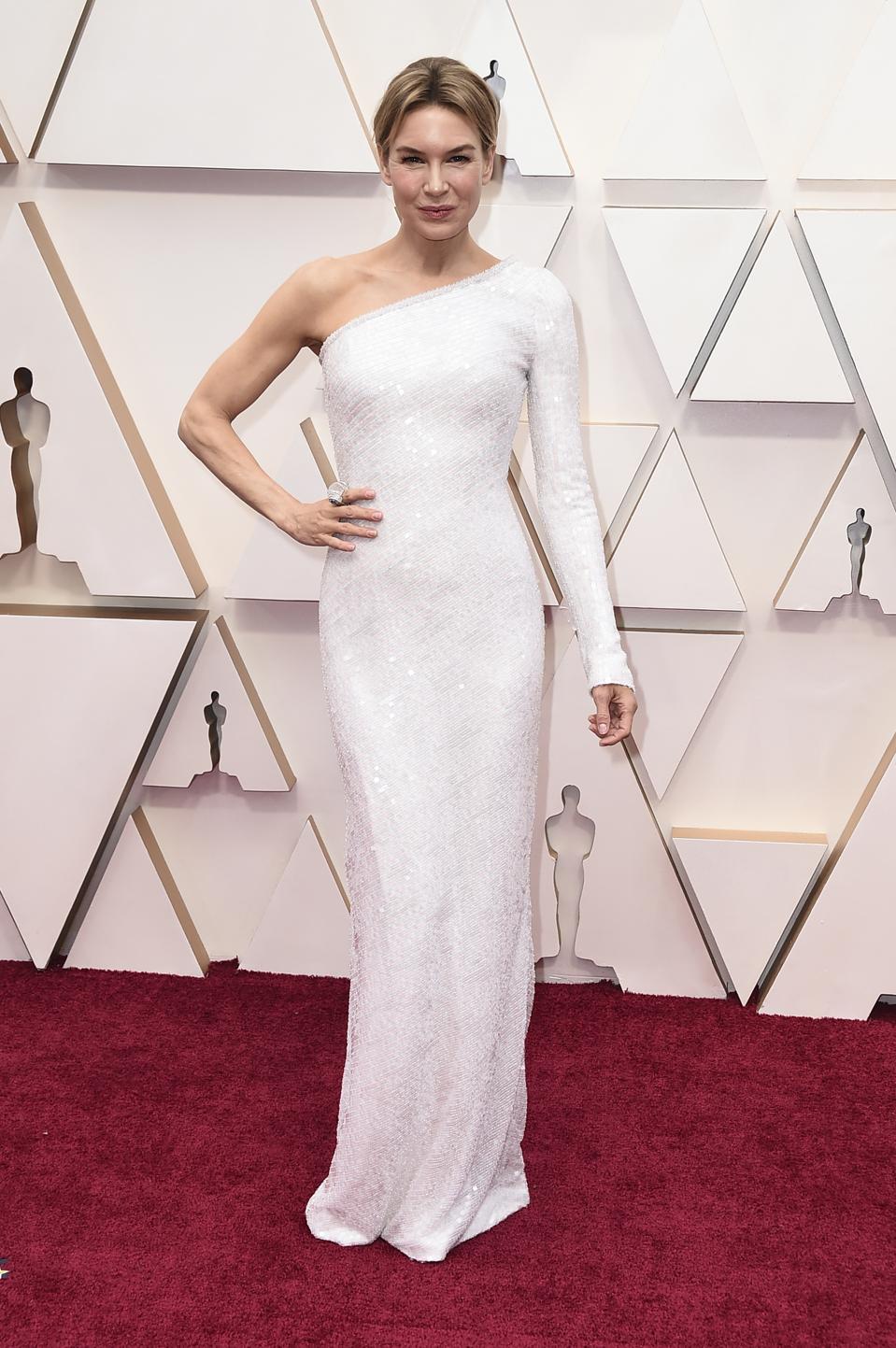 Renee Zellweger shows off her toned physique in a silk white gown by Armani Privé.

A number of other actresses glittered on the A-list catwalk—most notably Rebel Wilson (in a custom gold dress by Jason Wu) and Janelle Monáe (who arrived in a sparkling silver ensemble with a hood, studded with more than a thousand Swarovski crystals). 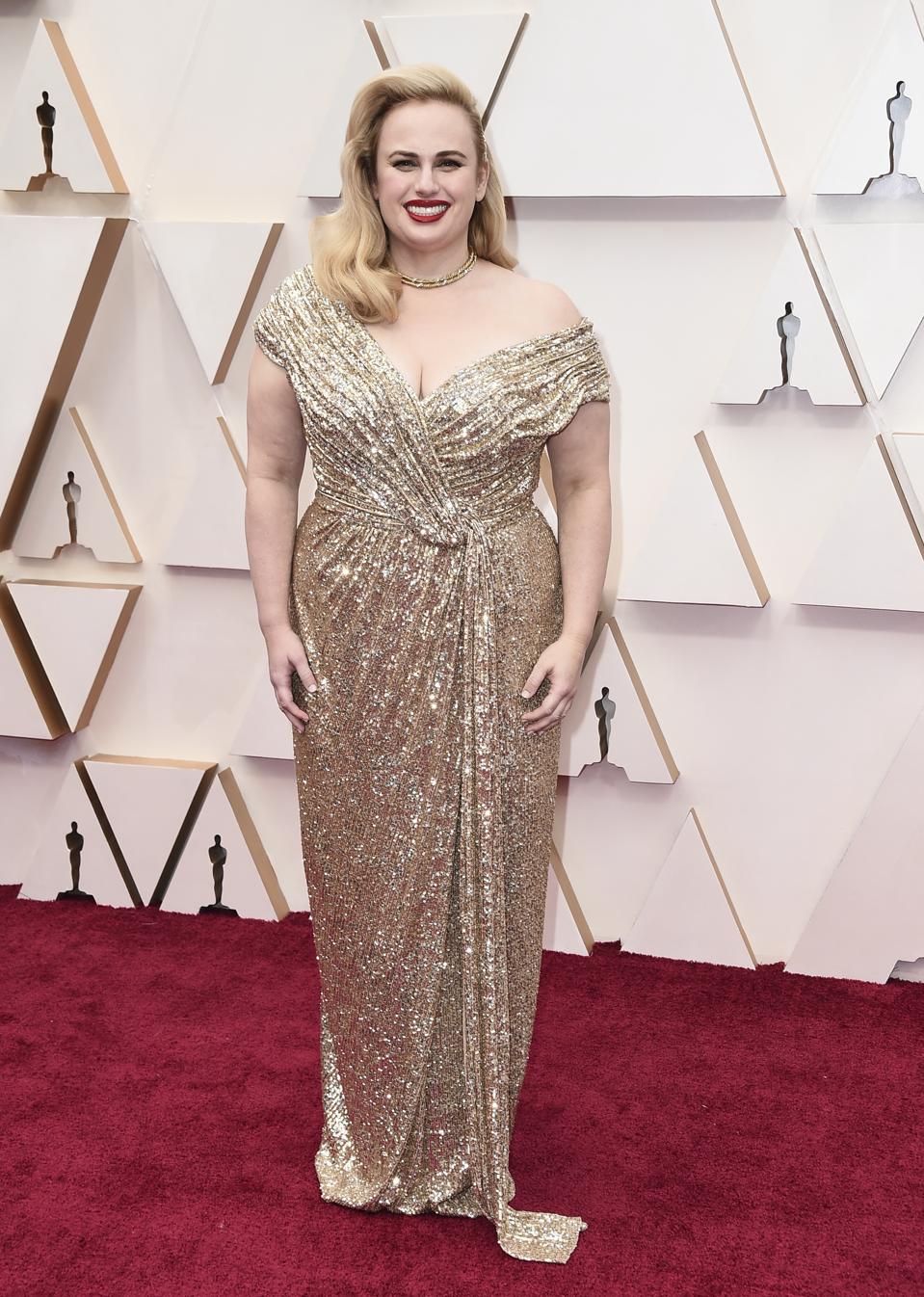 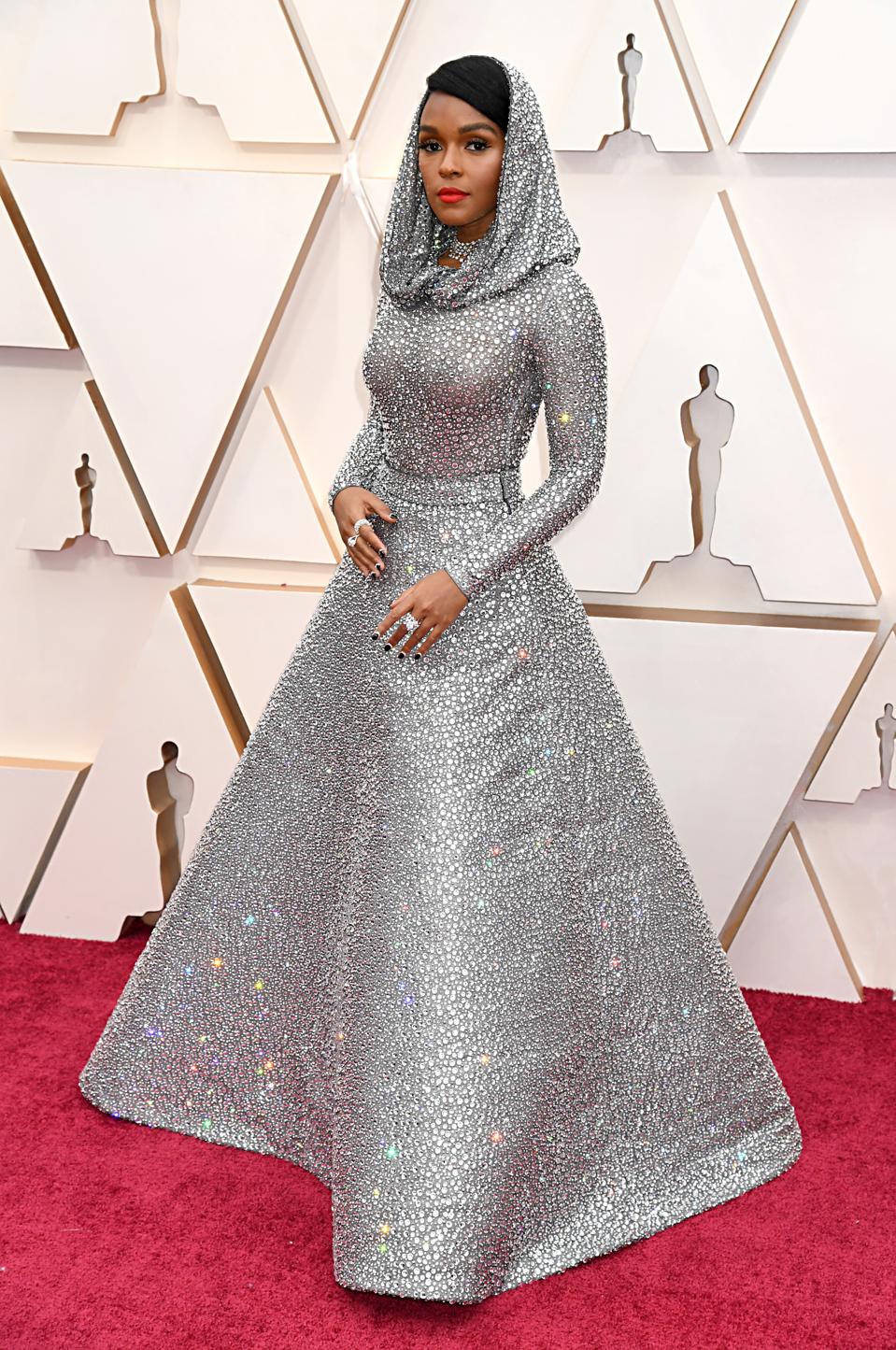 Capes were also on trend, with Brie Larson (in a champagne-colored gown), Natalie Portman (in black-and-gold Dior Haute Couture), and Olivia Colman (in a blue velvet dress with long sleeves) all sporting the elegant detail. 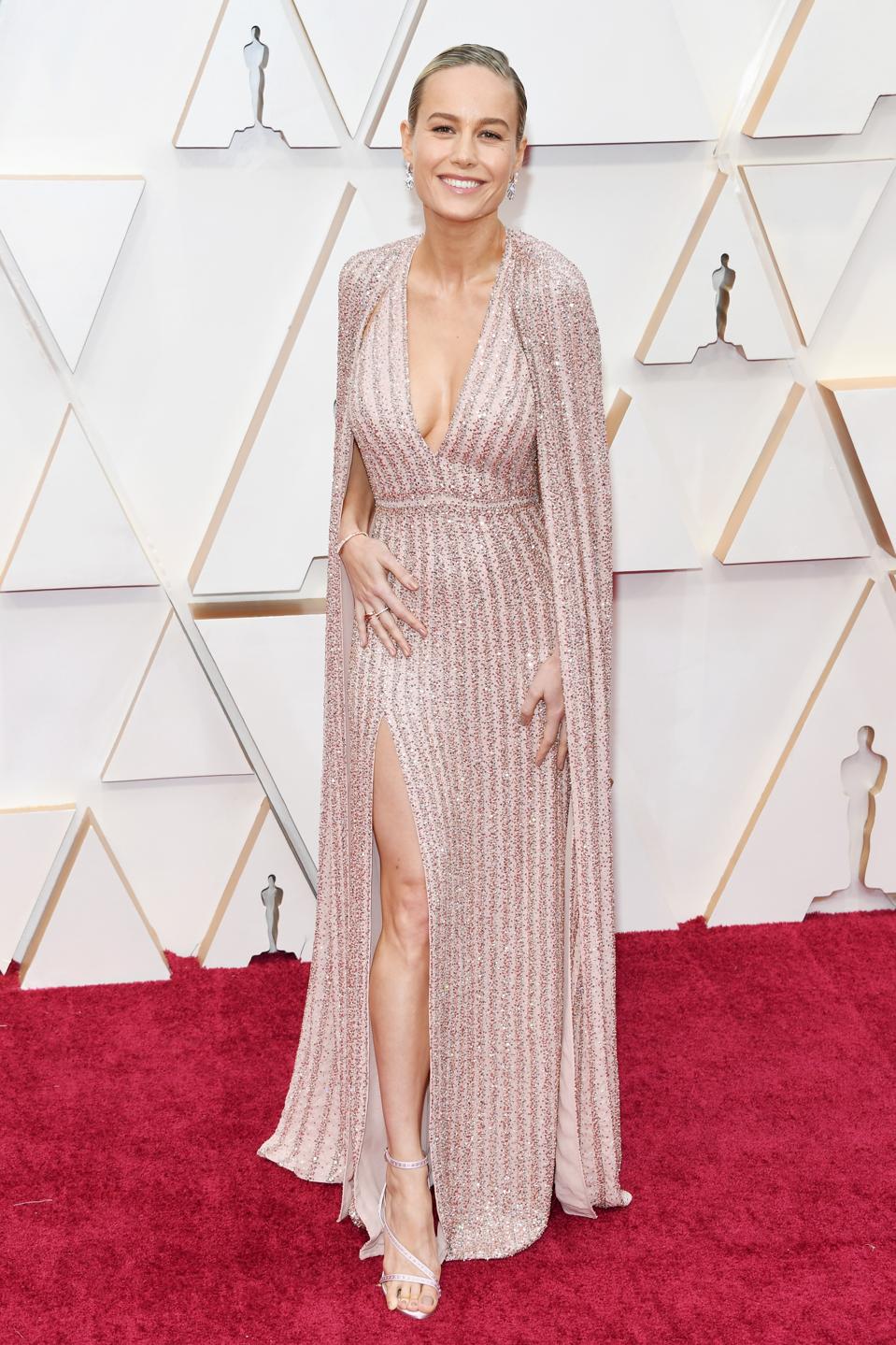 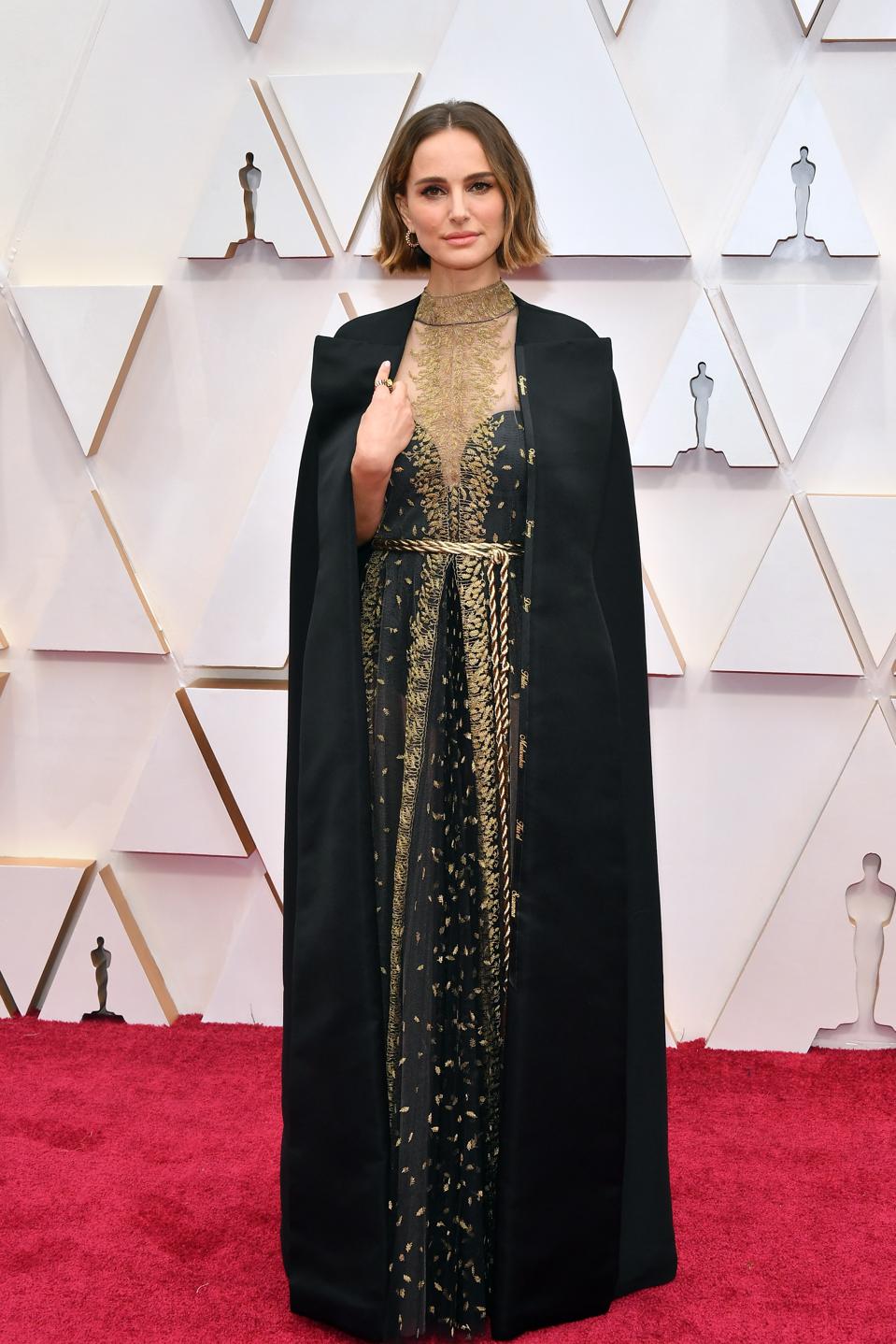 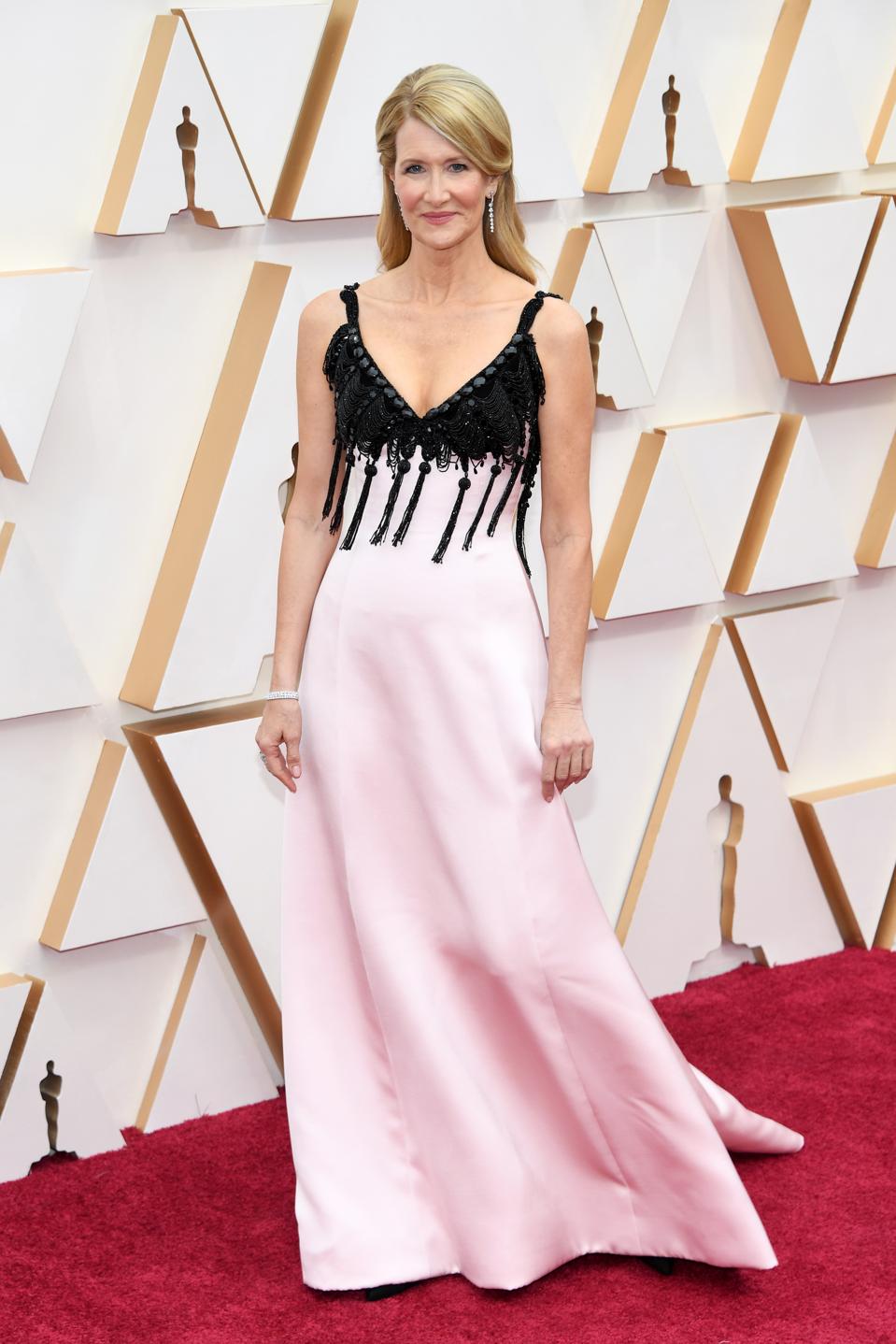 Other sartorial knockouts included Laura Dern (who appeared demure in a pink-and-black gown by Armani Privé), Mindy Kaling (who shined in a pleated one-shoulder gown) and Scarlett Johansson (who looked exquisite in a shimmering silver dress with a train by Oscar de la Renta). 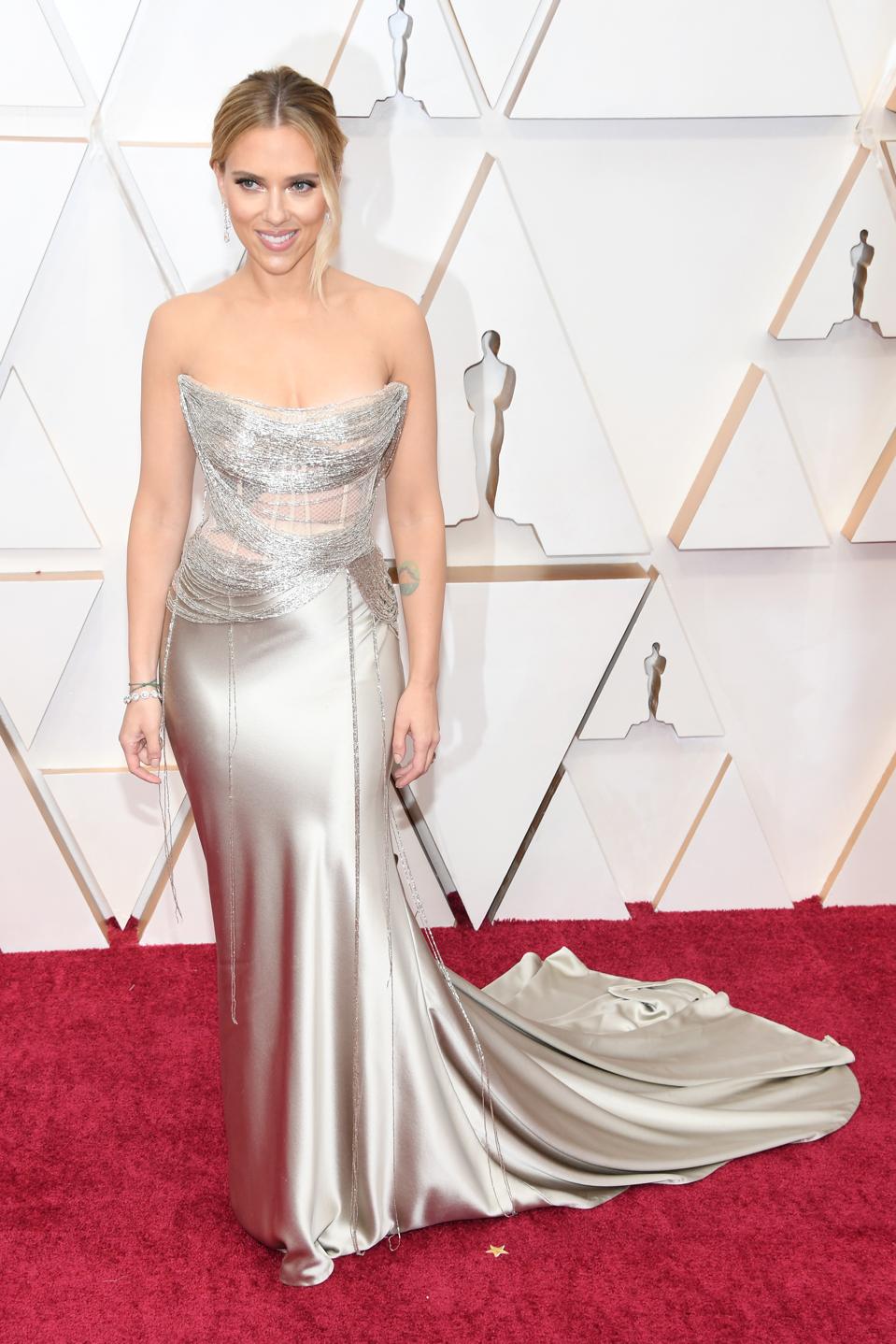 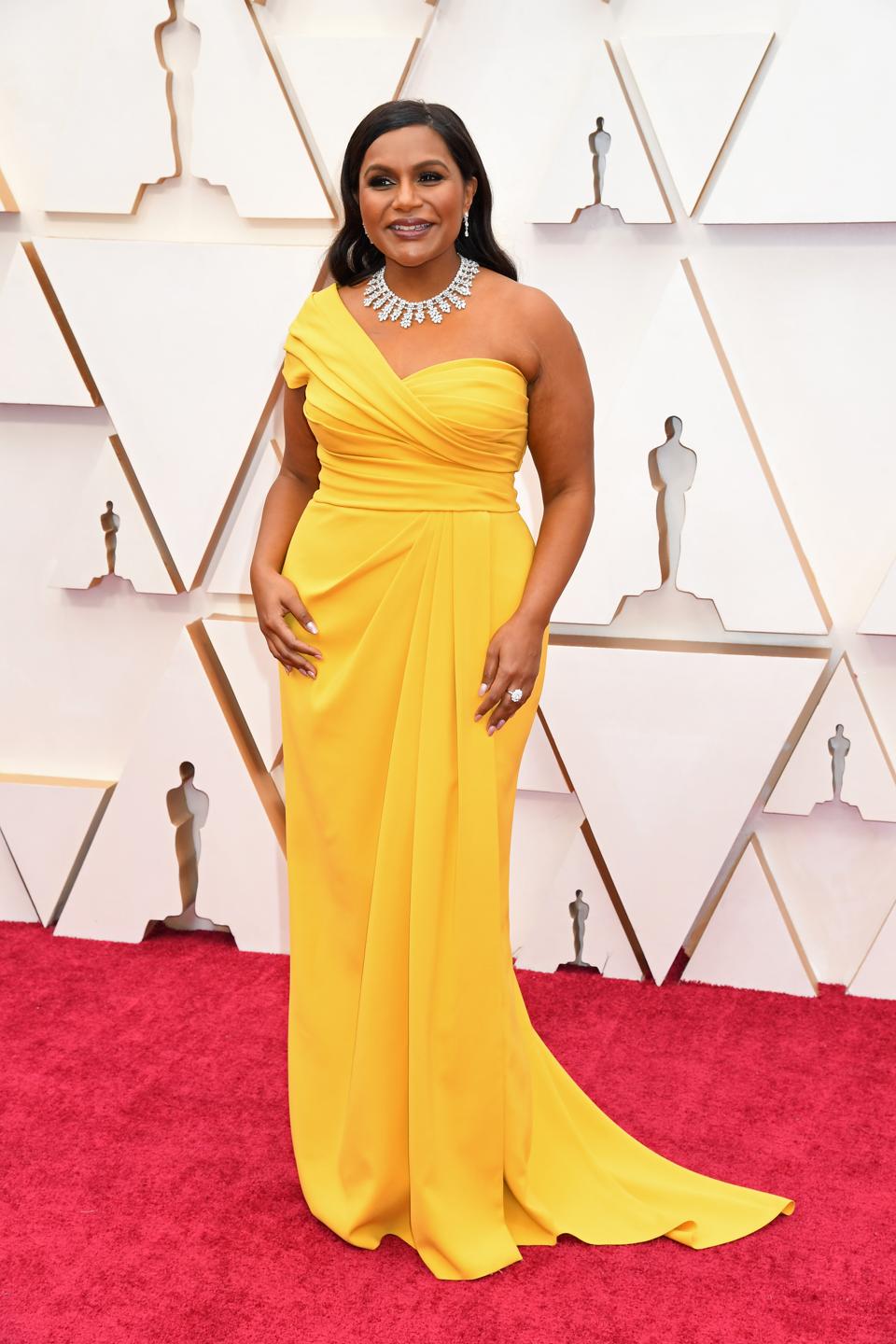 Mindy Kaling is radiant in a sunflower gown with a pleated bodice.

A few celebrities made more than just fashion statements on the red carpet, including Margot Robbie (in vintage Chanel) and Kaitlyn Dever (in an ethically made red gown by Louis Vuitton), who both championed sustainability with their sartorial choices. 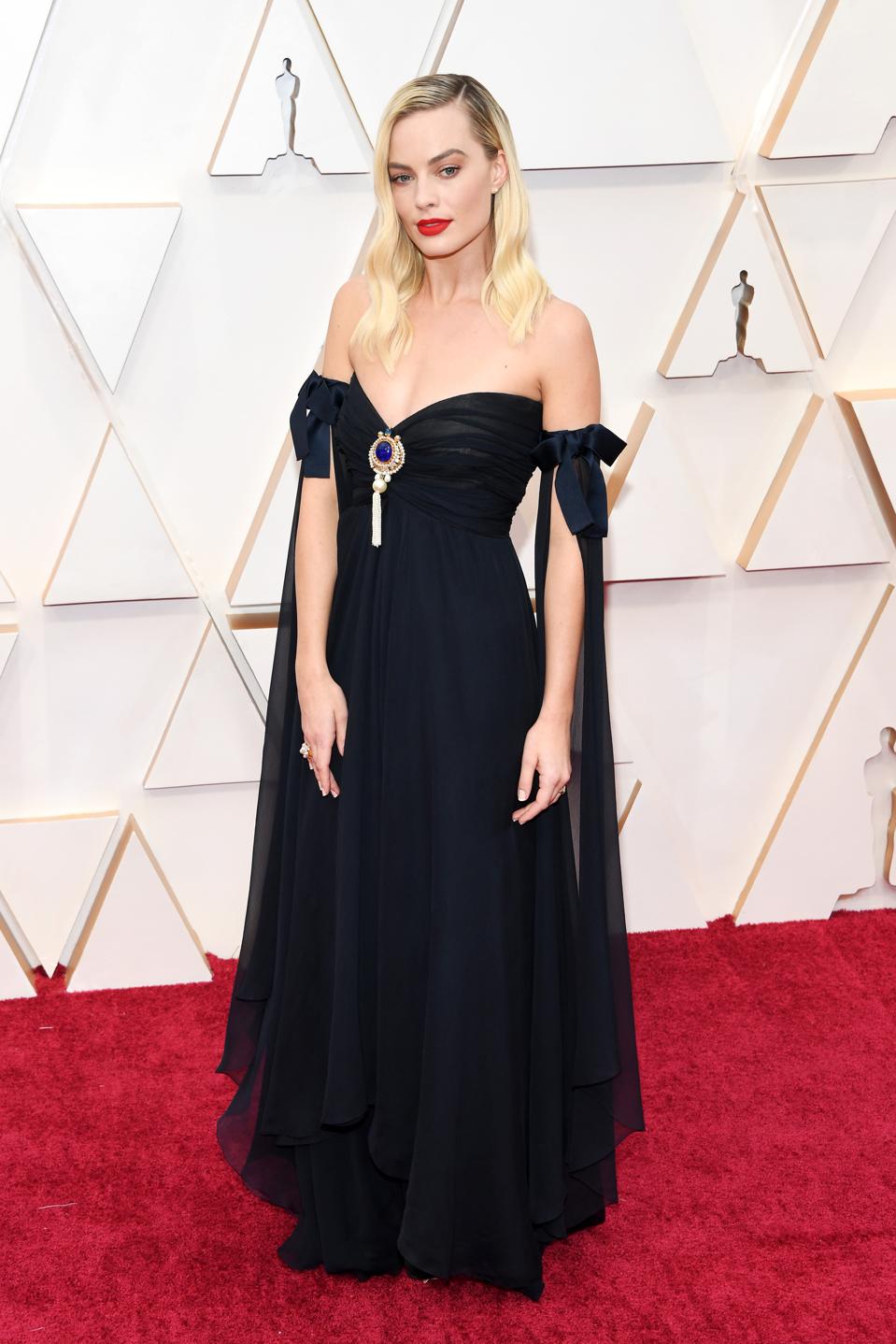 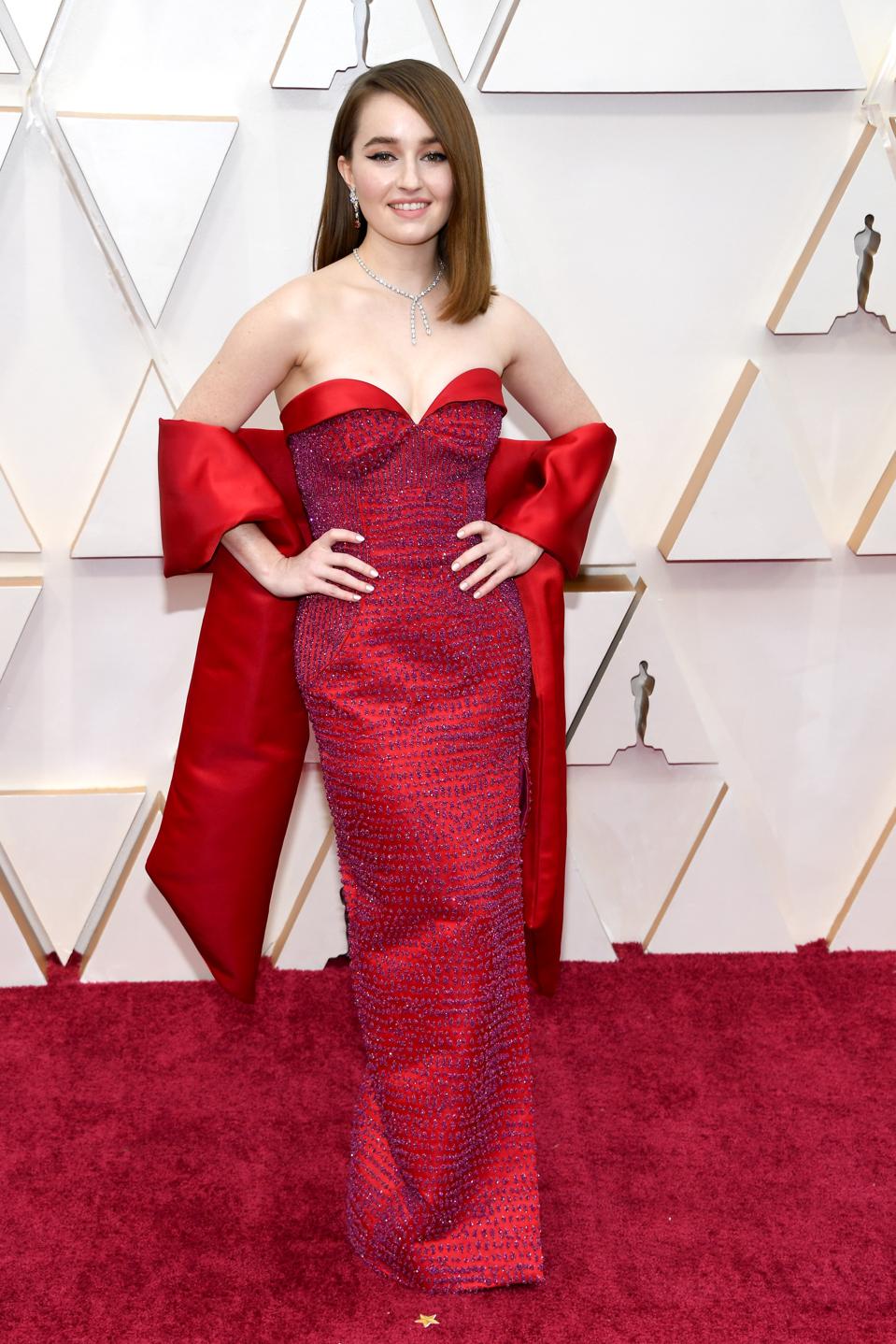 Kaitlyn Dever made a statement in Louis Vuitton.

Among the men who stood out were those in all black, from Rami Malek and Tony Hale to Pedro Almodovar and Al Pacino. 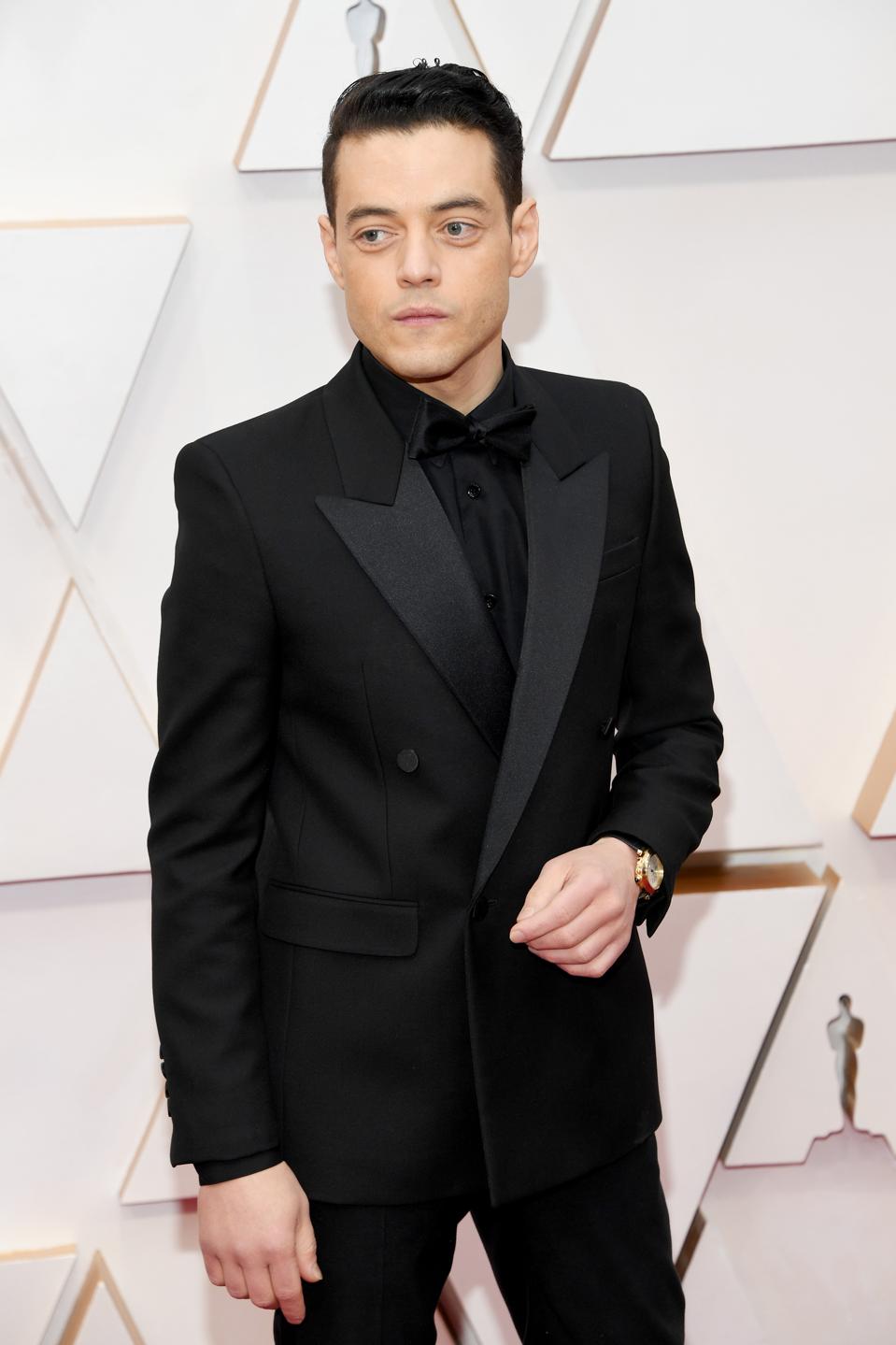 And Spike Lee paid homage to the late Kobe Bryant in a purple suit embroidered with the late NBA All-Star’s Lakers number, 24.

Transcript of The Biggest Social Media Trends to...

The Week In XR: Is This VR’s Moment?