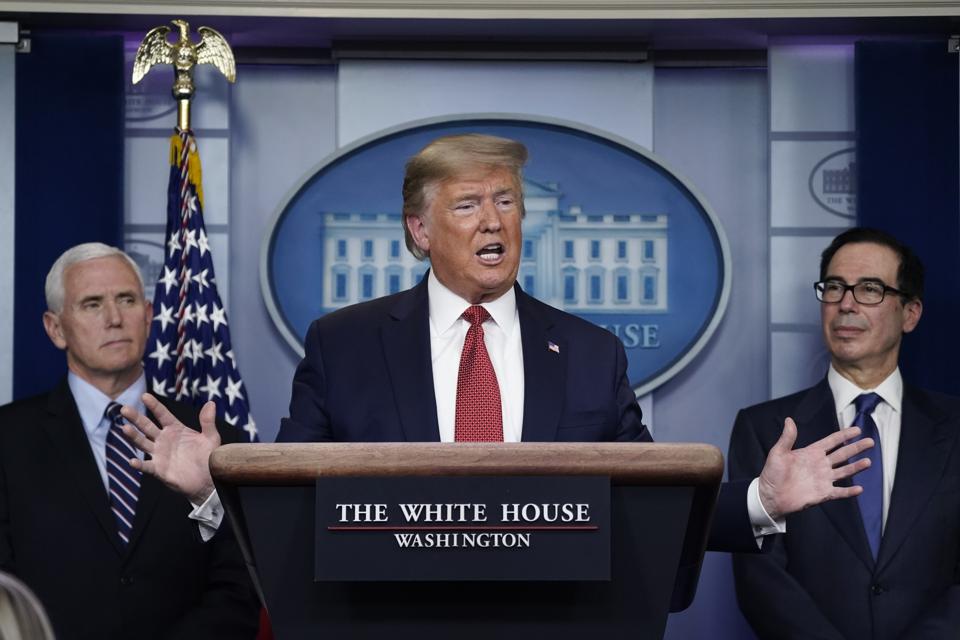 WASHINGTON, DC – MARCH 25: Flanked by Vice President Mike Pence (L) and Treasury Secretary Steven … [+] Mnuchin, U.S. President Donald Trump speaks during a briefing on the coronavirus pandemic, in the press briefing room of the White House on March 25, 2020 in Washington, DC. The United States Senate continues to work on a $2 trillion aide package to combat the health and economic effects of the COVID-19 pandemic. (Photo by Drew Angerer/Getty Images)

Topline: In a letter obtained by the Wall Street Journal, a bipartisan group of over a hundred former national security officials requested President Trump fully invoke the powers of the Defense Production Act to combat the Covid-19 coronavirus pandemic, calling the delay “a grave mistake.”

Crucial Quote: “If the ultimate objective is to save American lives, there is no alternative to utilizing the DPA immediately and to the fullest extent,” the letter says.

Key Background: According to the Washington Post, there are now 64,764 cases of the coronavirus in the U.S. and 919 deaths. Shortages of supplies have been an ongoing issue since the start of the pandemic. Illinois Governor J. B. Pritzker outlined the large unfulfilled requests to his state in a tweet Monday. President Trump last week said the federal government is “not a shipping clerk” and that “governors are supposed to be doing it.” The impending $2.2 trillion coronavirus relief plan includes funds to develop more supplies for the Strategic National Stockpile, but voting on the bill is currently delayed due to disagreements over unemployment insurance.

Help Your Community from Six Feet Away: Non-Marketing Tips from Mozzers

The Personal Economic Impact of the Covid-19 Crisis