A capacity crowd of 1,600 packed New York City’s Hammerstein Ballroom for the opening weekend of … [+] Overwatch League. It’s the first season where every match will be played in one of the 20 OWL home cities. Photo courtesy of Overwatch League

Just before 3 p.m. on Sunday, the Overwatch League experienced what it waited over two years for to finally come to fruition.

It was the opening weekend of Activation Blizzard’s third season of the 20-team city-based esports league, and each team would have a full year of home and away matches for the very first time in addition to worldwide broadcasts on Twitch and YouTube. The sensation of a true, regional rivalry was fully realized at the sold out Hammerstein Ballroom in New York City when Boston Uprising was met with a chorus of boos from the 1,600 fans in attendance before their loss to New York Excelsior (NYXL).

NYXL, Boston, London Spitfire, Paris Eternal and Toronto Defiant, the five teams in the Atlantic Conference’s Northern Division, played in New York while Pacific Conference teams played in Dallas at Esports Stadium Arlington. It was the first of a 26-week regular season that will be held at team sites, a culmination of a two-year buildup and process for Overwatch League to have live local matches in the U.S., Canada, England, France, China and South Korea.

Jon Spector, the vice president of Overwatch esports, sat with pride on a side balcony while watching the Paris-London series that was the first action on Sunday afternoon.

“For me, the reason why we wanted city-based franchises and a home and away model was this experience,” he said. “You talk to any of these fans and they’ve been looking forward to this experience for years. It’s one thing to sort of to back to our office and plan this, and we’ve been working on it for years, but it’s just been incredible just coming out here and seeing this for the first time.”

For many of the fans, it was not only their first live Overwatch League match, but the first time they got to cheer on their home team. The first ever OWL Grand Finals were played at Brooklyn’s Barclays Center, but NYXL wasn’t participating. So fans were happy to pay $80 a ticket or more to get in to see their home team, including 2018 MVP Jjonak, in action. There were also various levels of ticket packages, including weekend passes, season tickets and VIP experiences, including a pregame meet-and-greet with NYXL’s players.

They also raced to the ballroom’s basement upon entering before the matches, because NYXL was selling limited edition merch that was only available on-site. That’s because while OWL has an apparel licensing deal with Fanatics and others, NYXL would get all the revenue from homestand sales.

“When you talk to a lot of these fans, they’re not buying tickets to other live sports events,” Spector said. “They don’t go to Yankees games. I think a lot of the response you’re seeing is actually from this pent up, ‘we’ve always wanted this too.’ It’s been a couple years in the making.”

It’s also been years in the making for the players themselves, who also have to get used to playing in more friendly or hostile environments after playing the first two seasons at Overwatch’s Blizzard Arena in Burbank, Calif. On Saturday, Paris’ players weren’t used to competing in front of so many people according to Patrick Truong, the Eternal’s vice president of esports. While Paris was easily defeated by Toronto on opening day, they bounced back with a Sunday victory over London.

“The hardcore fans of Overwatch really showed their support,” Truong said. “It’s like you’re at a more traditional sports game. The booing of whoever your home team is playing, getting energy from the crowd. That was very exciting.” 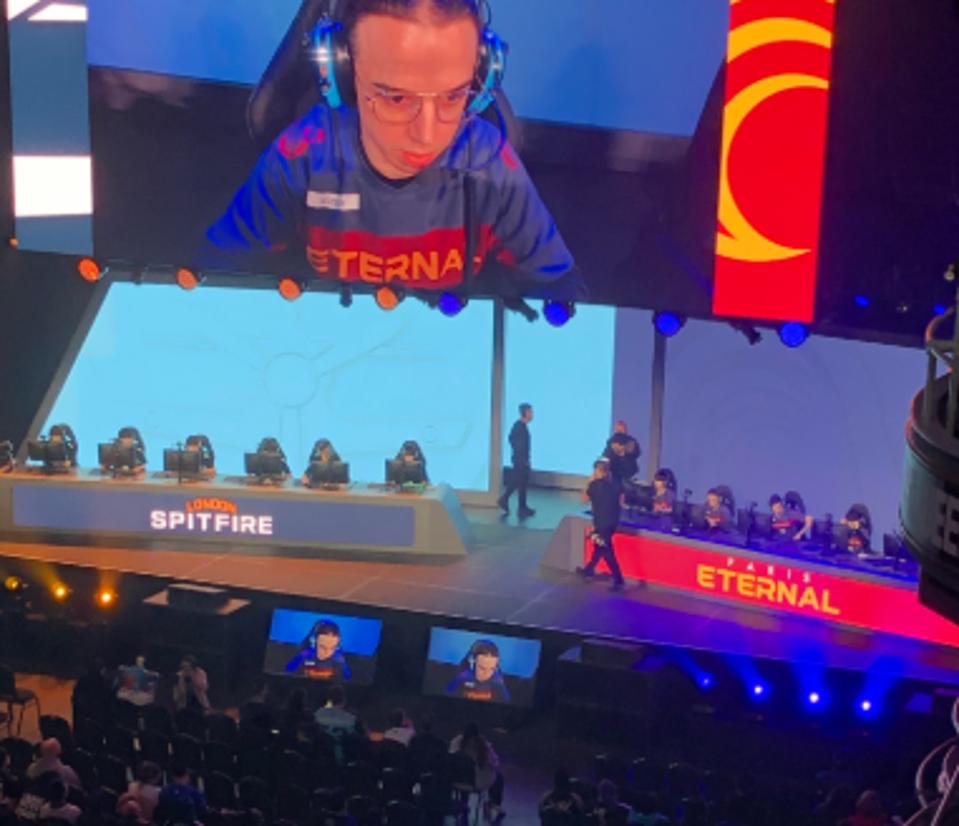 Paris was more calm and under control during its Sunday win over rival London. Photo courtesy of the … [+] author.

Though Boston anticipated the booing they’d get from the NYXL faithful, the Uprising players were happy with the change of venue, “instead of having a league that the last two years in California going into the same arena, same practice area,” said Matt Shiflet, Boston’s general manager.

And while fans were buying merch and food and cheering on their team, NYXL executives were trying to make sure that their first big event ran smoothly and that advertisers saw a product worth investing resources into.

“When we see 1,600 fans come and do a five-minute standing ovation for when the team walks out, we feel great about it,” said Rohit Gupta, NYXL’s co-founder and chief product officer. “Brands are here, trying to understand. It’s one thing to see it online. It’s a whole different opportunity to see the passion and the energy offline, and the fandom and energy that esports commands. They’re just trying to understand how they get more involved in this, which makes us happy.” 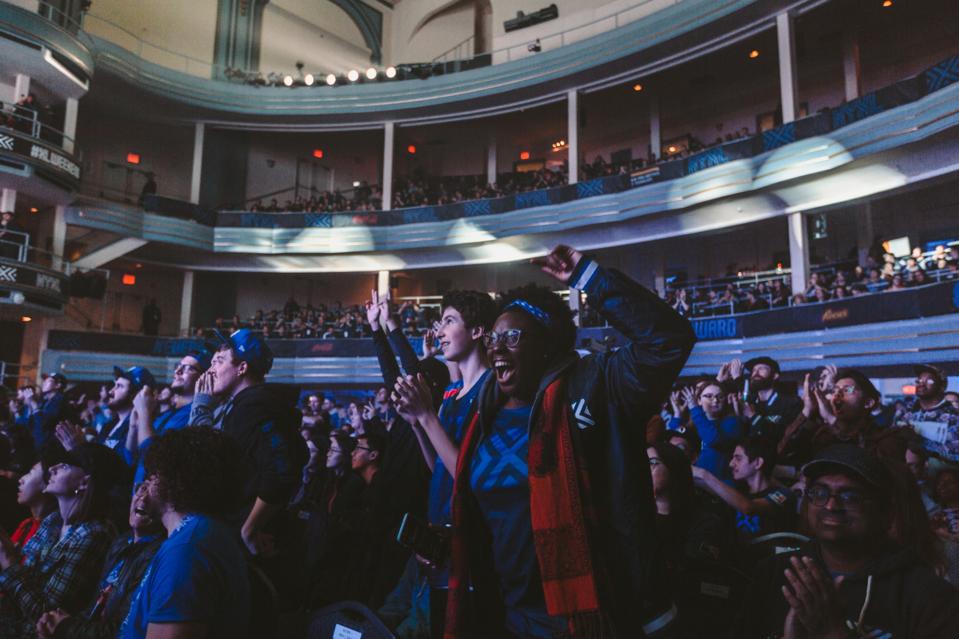 NYXL fans generally paid more than $100 to see their team in action for the first time ever over the … [+] weekend. Photo by steadyprime.

NYXL is actively looking to expand on its current partnerships, which include Coke, Reese’s and Buffalo Wild Wings. And 150 seats were reserved for prospective new partners looking to see what the Overwatch League homestand experience is like.

This homestand, Gupta hoped, would prove to advertisers that esports audiences will spend plenty of money in a live setting.

“They’re highly educated, very large disposable income, they’re getting the best of the technology every time it comes out,” he said. “This is an audience that shouldn’t be ignored.”

While Gupta said NYXL had set revenue goals for the team’s two homestands, the second coming at the end of May, it was more baked into the revenue estimates for the calendar year. Obviously there will be trial and error at NYXL’s events this season, Gupta said, and they’ll look at what other teams are doing with their home weekends. 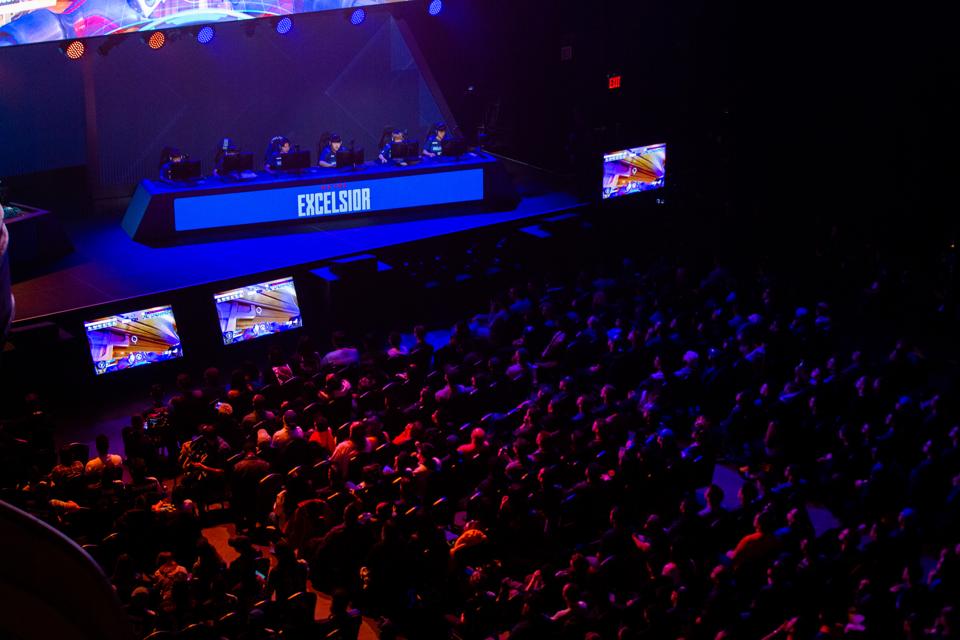 The NYXL crowd was cheering on its squad all weekend as part of New York City’s first ever … [+] homestand. Photo by steadyprime

Ownership and management groups from the four other teams were observing and taking notes on how the opening weekend was progressing, both on the stage and around the venue itself.

“I’ll definitely be bringing information back,” Truong said, “telling my team what New York is doing and comparing that to the things we’re preparing for our homestands.”

“We’re just trying to learn as much as possible,” Shiflet said.  “I think we’ll take everything into account and go from there.”

Like NYXL, whose AndBox ownership group if under the same corporate umbrella as the New York Mets, Boston Uprising is owned by the Kraft family of New England Patriots fame. So while other teams may be new to the city-based model and hosting regular events, New York and Boston have the advantage of decades of experience.

“This event has done really well for New York, so we’re hoping for something similar, Shiflet said. “I think some teams will struggle. There will be events that will be a little bit tougher, a little bit rougher. But I still think it can be successful while having those learning experiences along the way.” 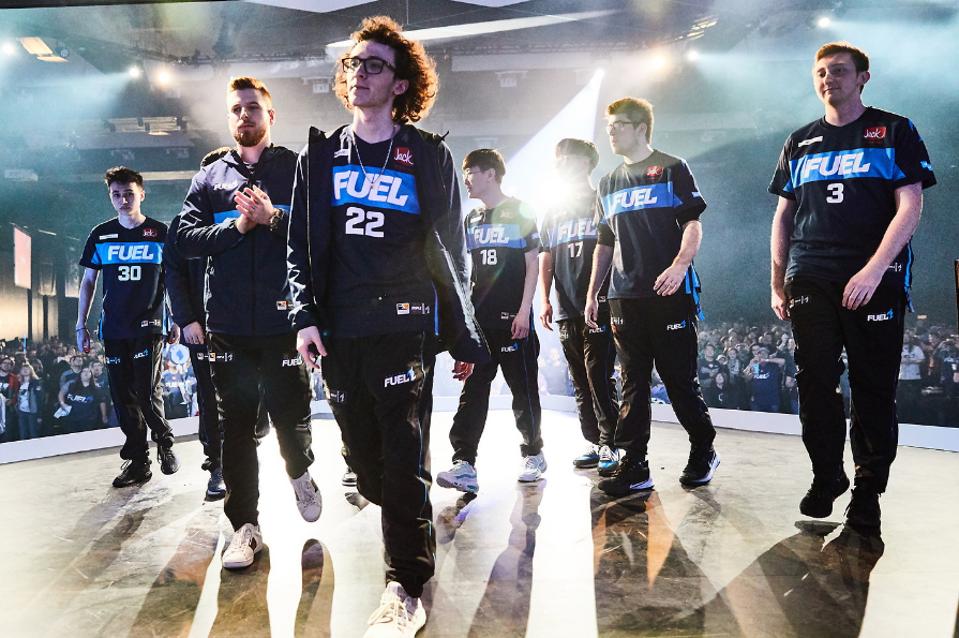 Boston’s homestands will take place at the end of April and June at the Citizen’s Bank Opera House, which has a similar layout and a slightly larger seating capacity than the Hammerstein Ballroom. But the cheapest tickets are going for $40, rather than the $80 seats being sold right before the NYXL weekend. Ticket prices and venue sizes will vary around the league, Spector said, but most arenas will be around 2,000 seats for the 2020 season.

Spector and Gupta both felt a rush of energy when they saw NYXL come out to the stage on Saturday and Sunday, but it’s going to probably take time for the entire league to truly get behind their home teams and players.

“There has been a problem for a while in esports with getting fans to really support teams,” Shiflet said. “There’s definitely a lot of fair-weather fans who follow players and not teams. You want your players to be stars, but you want their identities to be tied to the teams and the region.”

Having regional rivalries along with weekends spent in their home cities with their fans should help the city-based model push forward, Shiflet said. 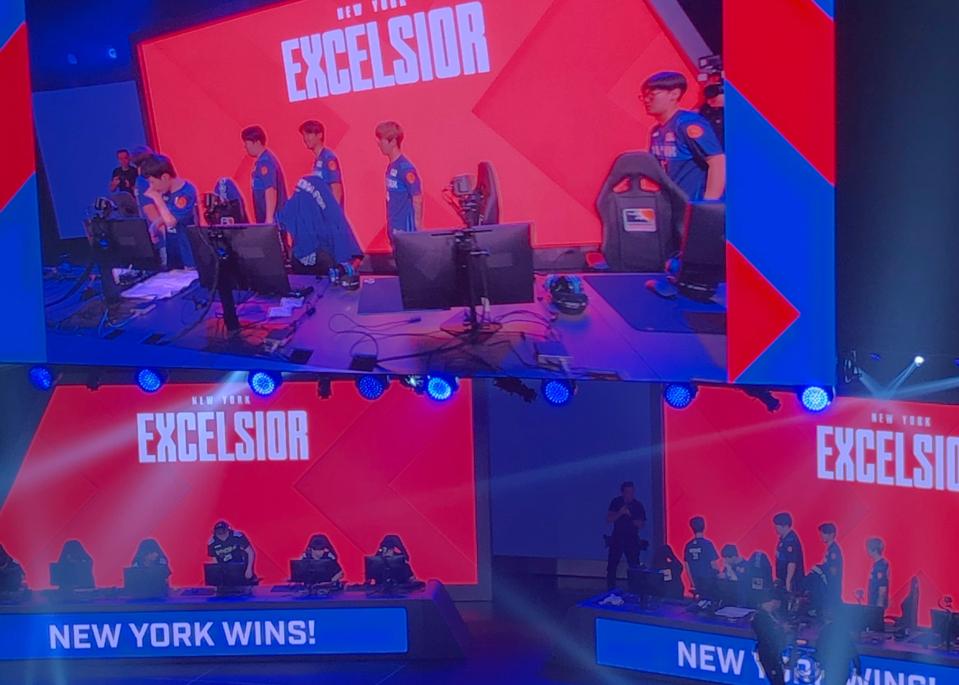 NYXL celebrates after its win on Sunday. Photo by the author.

Spector and Overwatch League are banking on a full season of homestands changing that perception. Of course, there are still a bunch of logistics to test out on a weekly basis, including the weekly travel, a more demanding schedule and the events themselves.

“We’re watching at every turn,” Spector said, “looking at feedback from our fans and our team owners.”

“We’re in test phasing right now,” Gupta said. “We’re all learning collectively about what the best fan experience is.”

What works best for the league during this inaugural homestand season will constantly be tested and tweaked. Spector noticed that there weren’t enough replays being shown during the broadcasts, so he told the OWL team to change it.

“Every single time we run an event, we need to be the league that comes away from this and has a conversation about what are we going to do to better next time,” he said. “I never want to look at something that even this is going as well as it’s going and say we nailed it, we’re done innovating.”

Depending on how the 2020 season goes, it could mean more homestands per season and an expanded regular season. But with another six months of regular season play still on tap, Spector hopes that it’s enough runway for Overwatch League to prove that its model will continue its rise as an ascending global sport.

“I want to continue to be the league that learns and grows and innovates,” Spector said. “And I think we’re going to continue to demonstrate why city-based esports is an amazing way to grow this business and to grow the fan base.”

7 SEO Processes That Get Easier with Increased...

How Masal Bugduv’s Dream Move To The Premier...