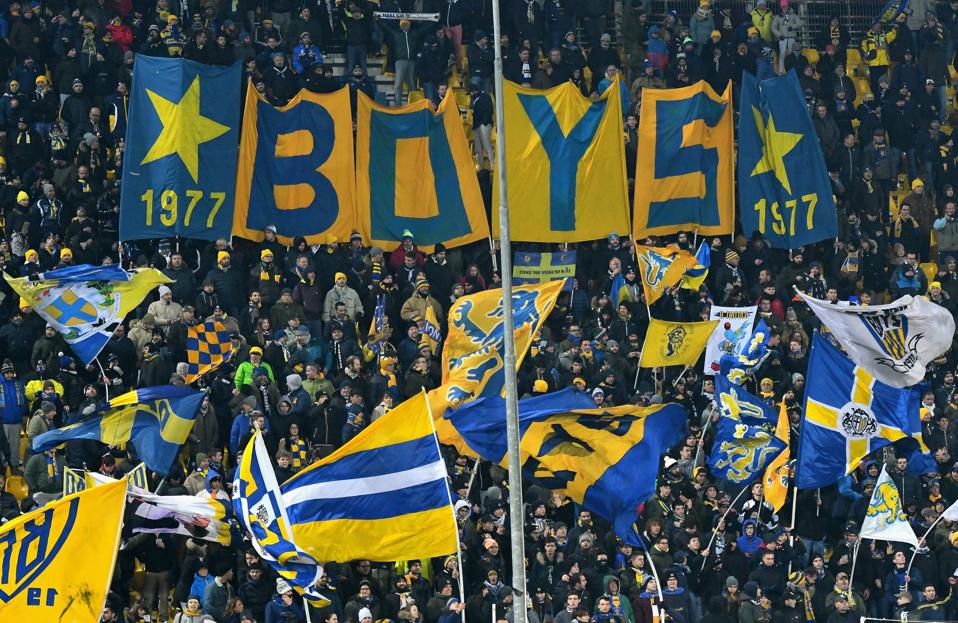 PARMA, ITALY – JANUARY 13: Parma Calcio fans show their support during the Serie A match between … [+] Parma Calcio and US Lecce at Stadio Ennio Tardini on January 13, 2020 in Parma, Italy. (Photo by Alessandro Sabattini/Getty Images)

When it comes to a mid-table Serie A side like Parma, new supporters are not borne out of endless victories or clever marketing campaigns. For these smaller clubs—both those in Italy and elsewhere—a sense of belonging is key.

On Saturday, I Ducali will face Juventus, the Torinese outfit having won the league title in each of the last eight seasons. As is usually the case, millions of viewers will tune in on TV to watch the Bianconeri continue their title defence, yet few will notice that the away sector is strangely empty.

This is not because of apathy for the side, or even a resignation to their fate in terms of results, but for the simple reason that they feel €43 is too much to pay for a ticket in the away sector.

Parma supporters are not alone in the boycotting of Juventus stadium, nor are Juve the only club who charge high prices for away fans in Italy, often giving restricted views or unacceptable conditions in return. Indeed, the same supporters stayed away from their match at Napoli’s Stadio San Paolo earlier this season for the very same reason.

Yet rather than lament this situation, Parma Ultra group “Boys Parma 1977” and “Centro Coordinamento Parma Clubs”—the latter the association for all the official fan clubs—are doing something about it.

They operate under the slogan of “Prezzi Popolari per Stadi Popolati,” which translates as “Affordable prices for full stadiums,” and they have already involved other clubs in Serie A by making reciprocal agreements with Sampdoria, Udinese and Atalanta to keep prices at a level between €10 and €15.

“We all have the same problem, so it makes sense, as fans, to try and work together,” Giorgio Martini from Parma Fans WorldWide told Forbes. “If all the small clubs unite properly, together we can have more voices than the big clubs.”

His organisation has been set up not for profits, but to assist those who come to Parma from abroad to see a match for the first time. “We focus on the most human point of view of what being a Parma supporter means, that “kind of magic” we all feel once experiencing a match at the Tardini live or just walking through the beautiful city centre of Parma,” reads a post on his website.

“Everything is about community,” continues Giorgio, when he recounts with passion what it means to support a club that is not at the very top. By “community” he doesn’t just mean those who live in the town of Parma, but anyone who shares the same passion for the club, regardless of nationality or background.

With this in mind, it’s now easy to see why these supporters will refuse to pay €43 to enter the Allianz Stadium in Turin on Sunday. The money that would’ve been spent on match tickets will now be donated to a local Pediatric Oncology Hospital.

You can follow Parma Fans Worldwide on Twitter or Facebook, and enquiries about donations to their cause can be also directed to the appropriate place by Giorgio himself.

How To Make Your Leadership Team Absolutely Exceptional

Retail Impacts Of Covid-19: Softening The Blow Before...