Home Finance Pension Strikes In France, Reform In The UK, And The Third-Rail-Ness Of Social Security Reform
Finance

Pension Strikes In France, Reform In The UK, And The Third-Rail-Ness Of Social Security Reform 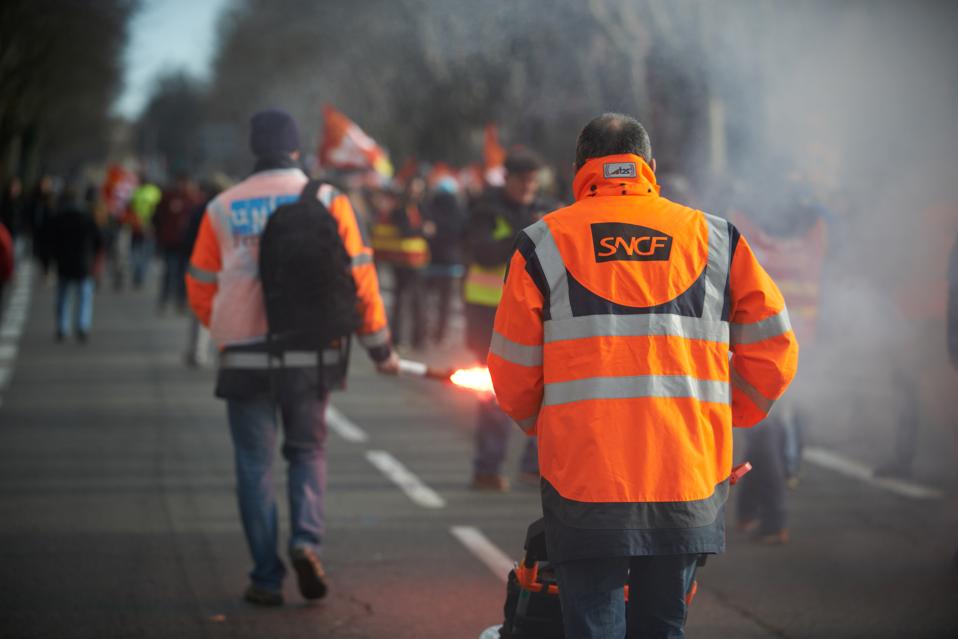 Dozens of thousands of protesters demonstrated in Toulouse for the 6th demonstration called by … [+] nearly all trade unions (CGT, SUD, UNL, UNEF, FO, etc.). It’s the 44th day of protests, strikes and actions. Protesters demand the withdrawal of the new reform of retirement (age, pension, conditions, etc.). Macron’s governement proposes a change between a pay-as-you-go pension system by a system by points (capitalization)on an idea from Jean-Claude Delevoye . The French government want also an unification of all pension systems in France (except for policemen, military, congressmen, senators, ministers). Toulouse. France. January 16th 2020. (Photo by Alain Pitton/NurPhoto via Getty Images)

In France, it’s day 44 of a strike by trade unions opposing a Social Security reform which, despite some reporting suggesting it’s only government employees who are affected, will transform pension benefits for all workers in the country. In recent days, the government has proposed reducing the age for full pension eligibility from 66 to 64, and, as described at the Washington Post, “the worst of the transit strikes has ended, with train service by and large back up but at reduced capacity.

But, remarkably, the latest polling, released three days ago, shows little movement in public opinion since the strikes began on December 5th, as evidenced by the overall stability in support for the protests and strikes, here,

Support for protests and strikes against pension reforms in France

and the relatively slight movements in opinions on the pension reform itself. 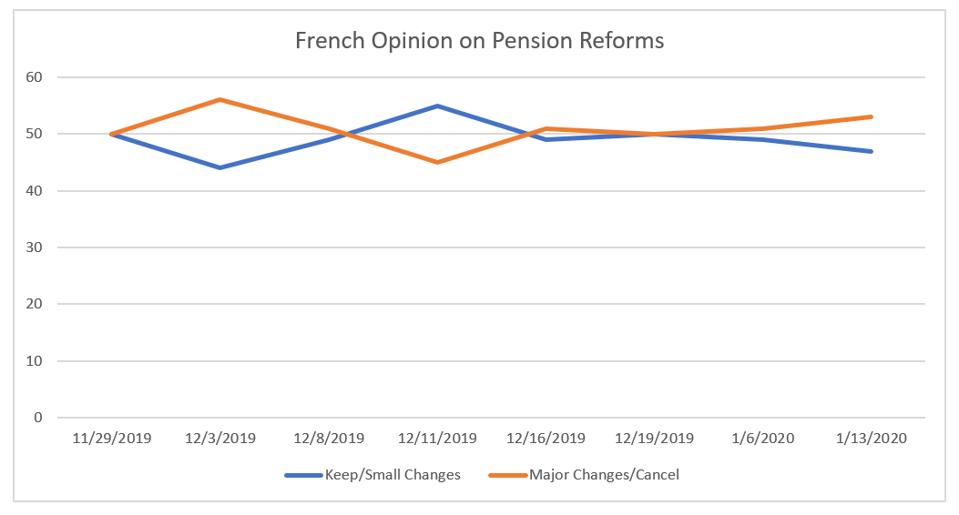 At the same time, let’s pay a visit to the United Kingdom.

Readers who have followed my writing from my first articles here at Forbes will recall my early profile of the state pension system in the UK, in which I described the pairing of a flat benefit and an autoenrollment system for individual retirement accounts — which just so happens to be very similar to my preferred Social Security reform for the U.S., though, to be clear, I first proposed this some years before the UK’s reform, which was proposed in 2014 and went into effect in 2016.

Now, this was a dramatic change, as previously the system had been fairly similar to the American Social Security system, with benefits based on wages, but tilted towards lower earners. Did the British react to it in the same manner as the French, or as Americans are predicted to react if a wholesale reform of our Social Security system were to be attempted?

To be honest, it was fairly difficult to find contemporaneous reporting about the change in the first place. An anti-poverty organization put together an interesting piece of analysis, but the mainstream news organizations didn’t seem to have much interest in this change at all, focusing instead on the “pension freedom” component to the legislation, in which workers with 401(k)/IRA-like retirement accounts were no longer required to buy annuities at retirement but could choose to spend down benefits no differently than Americans have been accustomed to all along. Another major change at that time was the end of “contracting out” in which an employer could keep the FICA taxes for themselves in return for providing pension benefits at a certain minimum level. Hence, the BBC reported, “Pension reform: Ten hidden consequences,” and the Financial Times, “Budget 2014: Pension reforms offer freedom to savers,” in both cases focusing exclusively on the “pension freedom” element of the changes.

Why did this legislation pass so invisibly in the UK? Actuaries in the UK tell me that there were multiple factors. First, the state-provided pension in France is, for most people (that is, by and large, except for top executives) the entirety of their retirement benefit, whereas the amount of Social Security in the UK had been more along the level of the US, or lower, so the stakes weren’t as high. It was also just the latest in a series of changes to the retirement age and the benefit formula, so that it didn’t necessarily register with people that there was a significant change. The British accepted the “sales pitch” that it was a positive change because it simplified the system. And, as evidenced by the complaints of the Waspis, people just weren’t aware of the changes (though that admittedly begs the question).

What does this say about the prospects for major Social Security reform in the United States? On the one hand, as with the UK, Social Security replaces a relatively small share of income for middle-income families. But on the other hand, as with France, Americans have been told for year after year that Social Security’s benefit formula was well-nigh untouchable, as if its designers were geniuses, in the same manner as the French have tried to reform their system for years, without success. And in that respect, we may have been better off if there had been more tinkering with the core benefit formula over the years rather than preserving it virtually unchanged since 1935.

Michael Avenatti Convicted Of Extortion, Faces Up To...

Use Bitcoin Or Ethereum On Amazon, eBay, Alibaba...