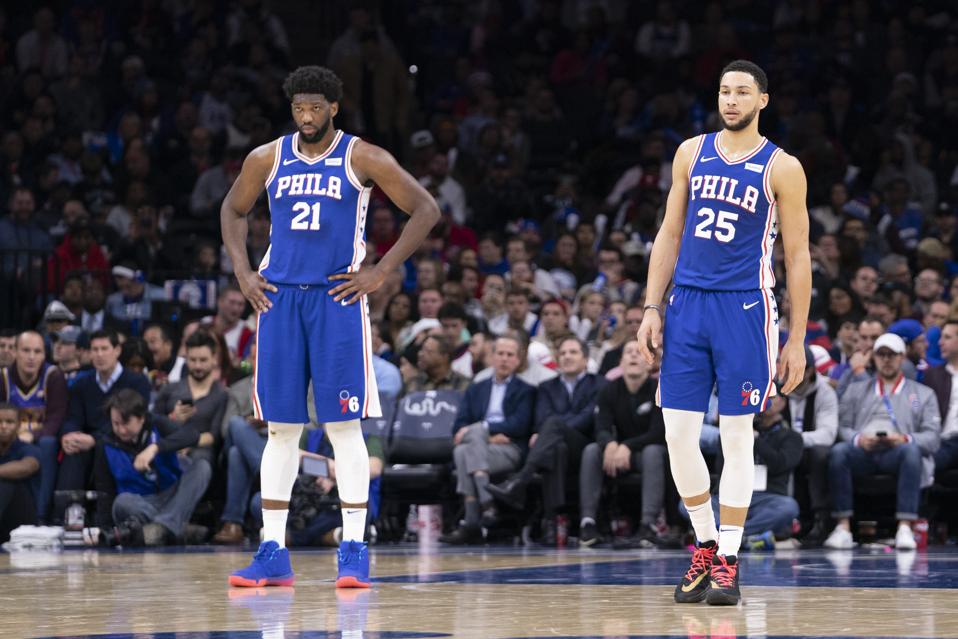 PHILADELPHIA, PA – DECEMBER 02: Joel Embiid #21 and Ben Simmons #25 of the Philadelphia 76ers look … [+] on against the Utah Jazz at the Wells Fargo Center on December 2, 2019 in Philadelphia, Pennsylvania. NOTE TO USER: User expressly acknowledges and agrees that, by downloading and/or using this photograph, user is consenting to the terms and conditions of the Getty Images License Agreement. (Photo by Mitchell Leff/Getty Images)

When Jimmy Butler left the Philadelphia 76ers in free agency this offseason, it raised the question of who the Sixers could trust with the ball in his hands in clutch situations.

One-quarter of the way through the 2019-20 NBA season, they aren’t much closer to figuring out an answer to that quandary.

The Sixers have largely papered over that issue with a dominant defense, but late-game offensive breakdowns have proved costly , particularly during recent losses to the Toronto Raptors and Washington Wizards.

In their 101-96 road loss to the Raptors on Nov. 25, the Sixers opened a 96-91 lead with 4:03 remaining in the fourth quarter. They proceeded to allow the Raptors to go on a 10-0 game-ending run, as their offense bogged down in a cascade of missed mid-range jump shots and turnovers.

With All-Star center Joel Embiid scuffling—he finished scoreless for the first time in his NBA career despite attempting 11 shots on the night—Josh Richardson tried to take over as the Sixers’ de facto closer.

After the Sixers couldn’t generate easy looks early in the shot clock, Richardson attempted three desperation mid-range jumpers, all of which harmlessly clanged off the rim.

Had Embiid hit Pascal Siakam with a better screen on the first shot attempt, Richardson would have had more space to get off his shot attempt. However, Richardson’s limitations as a late-game shot-creator against the Raptors stood out in stark contrast to Butler, who the Sixers installed as their primary go-to option during their second-round playoff series against this same Toronto squad.

Meanwhile, Embiid’s struggles against the Raptors weren’t only limited to his shooting. He turned the ball over on two consecutive possessions late in the fourth quarter, and he was lucky not to have a third giveaway with the Sixers nursing a two-point lead with 1:25 remaining.

The first play was well-designed, as Ben Simmons hit Raptors center Marc Gasol with a hard screen, freeing up Embiid to catch an open pass at the elbow from Al Horford. Embiid took off toward the rim and attempted a spin move around OG Anunoby, but the Raptors forward instead stood his ground and drew a charge.

On the Sixers’ next trip down the floor, Embiid caught a pass from Richardson at the three-point line and attempted to dribble his way into the paint. However, both Gasol and Anunoby quickly slid over to close off his driving lane, and Embiid dribbled the ball right off his knee and into the waiting hands of Anunoby.

Careless giveaways plagued Embiid during Thursday night’s 119-113 loss to the Washington Wizards, too.

The Sixers fell into a 15-point hole early in the fourth quarter, but they trimmed the deficit with a quick 8-0 run to put the game back within striking distance. However, Embiid turned the ball over twice during the final five minutes while attempting to go one-on-one against Wizards big man Moe Wagner.

On the first play, Embiid faced up Wagner, pump-faked and then immediately drove baseline. Wagner slid over and fell to the ground in an attempt to draw a charge, which the referees ignored. However, Embiid was careless with the ball and dribbled it out of bounds, leaving the Sixers with an empty possession at a critical moment of the game.

Embiid again faced up Wagner and attempted to take him one-on-one off the dribble. Wagner held his ground and reached in to swat the ball away from Embiid, both forcing a turnover and drawing a foul.

At media day, Embiid said he worked on his ball-handling and off-the-dribble creation this summer in the wake of Butler and J.J. Redick’s free-agent departures.

“You gotta be more than a post player,” he said. “You gotta be able to do other things cause it’s easier for other teams to send double-teams when you’re just posting up back-to-the-basket, so you gotta attack off the dribble, shoot off the dribble. So I worked a lot on that type of stuff, and I got a lot better.”

Although Embiid’s passing out of double-teams has never been better, he’s still prone to commit far too many careless turnovers when he’s attacking off the dribble. Until he tightens up his handle and cuts down on his giveaways, opponents figure to continue goading him into putting the ball on the floor and banging his way into the paint.

Rather than forcing Embiid to create for himself, the Sixers need him to establish deep post position and then feed him the ball right away. That rarely ends well for opponents.

However, Embiid also needs to be more decisive when he does attack off the dribble. Spending multiple seconds facing up gives opponents a breather and allows help defenders to slide over in position to force turnovers, whereas quick attacks upon the catch often lead to defensive breakdowns.

The Sixers can’t always rely upon Embiid to bail them out with crunch-time buckets or trips to the free-throw line, but their other options have exploitable weaknesses as well.

Although Simmons is a dynamo in transition, his reluctance to shoot jump shots and the Sixers’ cramped offensive spacing limits his ability to create in the half court. Richardson may be the most natural pick-and-roll creator, but he’s currently sidelined with a hamstring injury and is still feeling his way out in the Sixers’ offense. Tobias Harris is the other default go-to option, but his aggressiveness seemingly waxes and wanes on a possession-by-possession basis.

Heading into the season, Harris said the Sixers weren’t going to have a primary go-to guy. Instead, it was “going to be whoever has it going.” However, Sixers head coach Brett Brown recently told reporters that he wants Harris to “have a scorer’s mentality” and “to find the rim,” as the team needs a wing that can create off the dribble late in games.

The Sixers’ egalitarian approach in crunch time should eventually make them less predictable, but their execution isn’t up to snuff at the moment. Until they find more consistent sources of offense in late-game situations, they’re going to continue being on the wrong end of frustrating losses.

How to Future-Proof Yourself Against AI

Drinking Rosé Wine On A ‘Luxury Yacht’ In...

Darth Maul In ‘The Mandalorian’ Season 2 May...