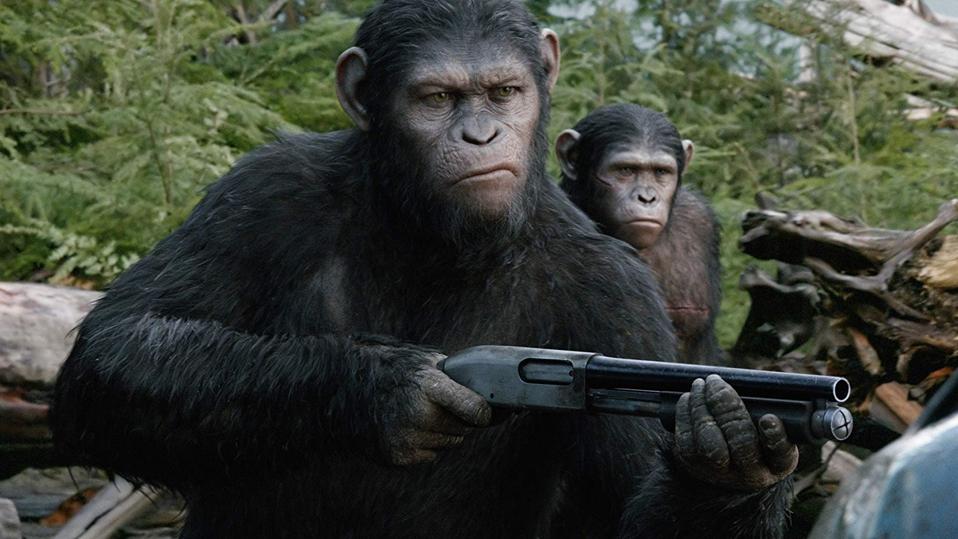 With Terminator, Alien and Predator now defunct. and with X-Men getting rebooted into the MCU, Planet of the Apes is now Disney’s most valuable Fox theatrical franchise aside from Avatar and Deadpool.

Fresh off Ford V Ferrari becoming, barring a post-Thanksgiving crash, the first big Fox hit under the Disney umbrella, Hollywood Reporter is reporting that Fox/Disney is developing another go at Planet of the Apes. Wes Ball, who directed the hell out of the Maze Runner trilogy (which grossed $949 million worldwide on a combined budget of just $127 million despite looking and feeling like $100 million-plus action/sci-fi/horror fantasies) is attached, which I suppose is a consolation prize after Disney whacked his $170 million adaptation of The Mouse Guard. Slight digression, but that’s precisely the kind of big-budget, based on a “cult” IP biggie (or outright original) that we all wish Hollywood would make only to not show up in theaters when they do.

I am assuming that this will be a theatrical endeavor (and not a Disney+ original feature), although I don’t know if it will be a continuation of the previous trilogy’s continuity or a straight-up reboot. I have to hope that it’s a loose sequel, as the previous three films have an established fanbase and there’s hundreds of years’ worth of unexplored continuity between the end of War for the Planet of the Apes and what I presume will eventually be a loose remake of the initial 1968 blockbuster, itself based on a Pierre Boule novel and loosely remade in Tim Burton’s 2001 “reimagining” that earned $362.2 million on a $100 million budget but was so disliked that Fox didn’t chance a second go-around.

The previous rebooted trilogy was a critical and commercial success, standing out as prime examples of a “reboot done right.” Rupert Wyatt’s Rise of the Planet of the Apes earned strong reviews and opened with $54 million in August of 2011, legging it out to $176 million domestic and a whopping $481 million worldwide on a $93 million budget. The 2-D feature was the second-biggest August grosser ever at the time, behind M. Night Shyamalan’s The Sixth Sense ($672 million in 1999). It also outgrossed the summer’s deluge of comic book superhero movies, earning more than Thor ($449 million), X-Men: First Class ($346 million), Green Lantern ($216 million), Captain America: The First Avenger ($376 million) and Cowboys and Aliens ($175 million).

Matt Reeves (Cloverfield and Let Me In), took over for the sequel. Dawn of the Planet of the Apes was, partially thanks to a still-valuable 3-D conversion, a breakout sequel in the summer of 2014, opening with $71 million and legging out to $210 million domestic and $710 million worldwide on a $170 million budget. The acclaimed sequel, set ten years after the first film at a time when most of humanity was wiped out and the survivors were pitted against the now dominant apes, outgrossed The Amazing Spider-Man 2 ($202 million/$709 million), Godzilla ($200 million/$529 million) and ended up just under Captain America: The Winter Soldier ($259 million/$714 million), X-Men: Days of Future Past ($233 million/$748 million) and Maleficent ($242 million/$758 million).

War for the Planet of the Apes was set further in the future and was told entirely from the point-of-view of the apes as near-extinct humans made their last stand. It dropped a bit from the last film, despite rave reviews, partially due to not seeming all that different from the last one and due to being a relentlessly grim would-be blockbuster. Of course, the whole “fewer folks go to the movies just to go to the movies” factor was a variable as well, as was the increasing dominance of superhero cinema on a scale only hinted at in 2014. The $150 million flick earned $146 million domestic and $491 million worldwide, giving the trilogy a combined $1.683 billion global gross on a combined $413 million budget.

Beyond the relatively massive success of the previous trilogy, one which for at least two installments stood toe-to-toe with the biggest comic book superhero flicks of the given year, the IP has always been popular. The original Planet of the Apes franchise was essentially the first modern sci-fi blockbuster movie series, even if each sequel cost less than the previous one (from $5.8 million for the first to $1.8 million for the fifth) and grossed less (from $32 million in 1968 to $8.8 million in 1973) at the box office. Tim Burton’s much-derided remake, starring Mark Wahlberg as the time-traveling astronaut, earned mixed reviews and still opened with a $68 million debut, second only to The Lost World ($74 million) at the time and earned $180 million domestic.

Despite or because of the franchise’s grimly topical politics (although Burton’s remake swapping out racism and xenophobia for animal rights issues didn’t quite work), the fx-heavy franchise is batting 1.00 in terms of “Did this movie make a decent chunk of change in relation to the production budget?” It also, and here’s the third note, arguably one of the last remaining theatrically viable IPs that Disney has from the Fox library. The movie industry has changed even from late 2017 (when we first heard rumblings of Fox being sold to Disney) and mid-2019 (when Disney officially took over). The industry is struggling with a deluge of moviegoers who now consume most of their filmed entertainment via VOD or streaming platforms instead of theaters.

So the notion that Disney would purchase Fox’s strength in terms of producing/releasing big movies for adults isn’t quite what it was, as the Fox of just five years ago (when they won the global market share race with varied hits like Rio 2, The Other Woman, The Fault in Our Stars, How to Train Your Dragon 2, X-Men: Days of Future Past, Gone Girl and Birdman) is but a taunting mirage. In terms of existing IP, Disney has already (perhaps wisely) relegated Home Alone and Night at the Museum to Disney+ for future installments as X-Men: Dark Phoenix, The Predator, Alien: Covenant and Terminator: Dark Fate left those franchises mortally wounded in terms of being theatrically viable IP. So, what else do they have?

Knives Out shows that folks really do like all-star murder parties, which bodes well for Kenneth Branagh’s Death on the Nile (a sequel to the $349 million-grossing Murder on the Orient Express) next year. Both Kingsman movies topped $400 million global, but A) The Golden Circle wasn’t terribly well-received and B) the upcoming prequel, The King’s Man, looks great but represents a considerable risk in betting that audiences care about the IP as opposed to Eggsy and Harry’s present-tense spy games. X-Men was always going to end up in the MCU anyway, and Logan closed the book on “Hugh Jackman as Wolverine” flicks. I don’t know what that does or doesn’t mean for Ryan Reynolds’ R-rated Deadpool series. And it’s not like folks are hungering for another Simpsons movie.

So, give or take one that I might have missed or whatever brand exploitation can be found in The Greatest Showman, it’s mostly down to Deadpool, Avatar and Planet of the Apes. That Fox’s other properties haven’t been so hot frankly makes it that much more likely that Disney will allow Deadpool to remain R-rated (at least in a solo film or two) so as to not kill a golden goose. But this does all mean that Planet of the Apes is the most likely Fox property to get the theatrical reinvestment, almost by default. It was huge from 1968 to 1973, it was huge in 2001, and it was huge from 2011-2017. I don’t know if Apes can make it 4/4, but the odds are in its favor.

Casper Files For IPO But Warns It Won’t...

How To Adopt Proptech Successfully