Player Grades For The Milwaukee Bucks At The NBA’s Hiatus 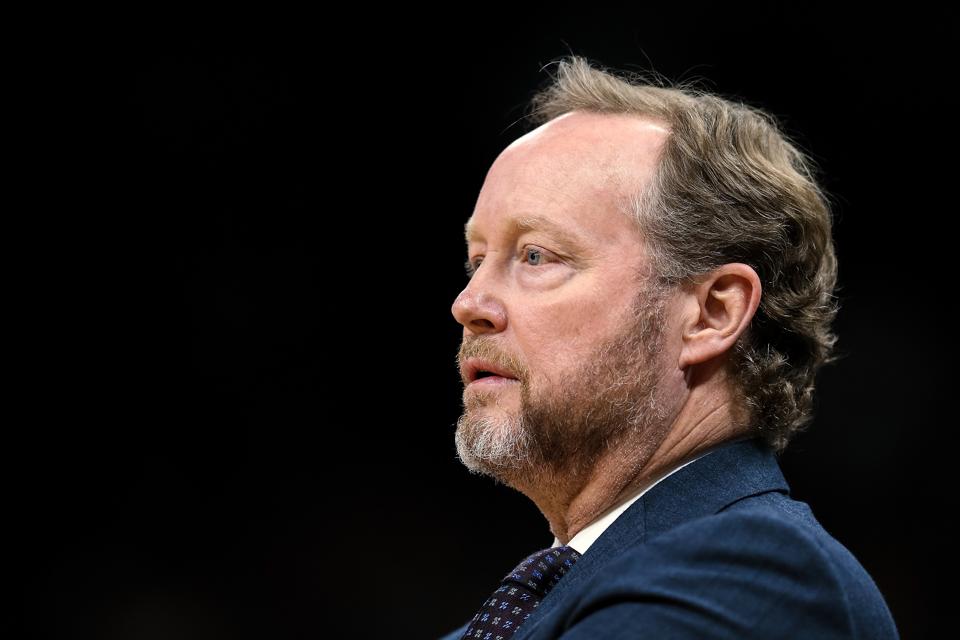 MILWAUKEE, WISCONSIN – JANUARY 31: Head coach Mike Budenholzer of the Milwaukee Bucks looks on in … [+] the third quarter against the Denver Nuggets at the Fiserv Forum on January 31, 2020 in Milwaukee, Wisconsin. NOTE TO USER: User expressly acknowledges and agrees that, by downloading and or using this photograph, User is consenting to the terms and conditions of the Getty Images License Agreement. (Photo by Dylan Buell/Getty Images)

While we hope and pray the 2019-20 NBA season will return and give the Milwaukee Bucks a chance to cement their claim as the league’s best team, there are no guarantees one way or the other.

General manager Jon Horst filled his team with gobs and gobs of capable players; beginning with the very top of the roster down to the last man on the bench. And just about everyone has met their individual expectations, allowing the team as a whole to succeed.

Speaking of individual expectations, that’s the curve used to hand out these grades. For example, if a player was expected to hit 36 percent of their threes this season, but is only making 29.6 percent—they’ll be downgraded. If another individual’s expected mark was around 30 percent and they’re making 34.4 percent, they’ll receive a positive mark. That’s just a hypothetical situation, of course.

It seems unlikely there will be any regular season left to play if/when the NBA returns so consider this as the potential final season grades for each player:

The expectations were low for Antetokounmpo coming into the season considering most don’t see him as an NBA-caliber talent. He’s proven he doesn’t care what others think and is just here to work hard and support his teammates. Although undisciplined, his energy on the court is infectious and there’s no denying he goes 100 percent every second he’s out there. That’s all you can ask from the last guy on the bench.

It’s been over a year since Wilson received significant playing time, thus the low grade. The #FreeDJ campaign seems to have died down as either fans have realized he’s not quite worthy of minutes or they’ve straight given up on the fact that he’ll see the court on regular basis. Unfortunately, Wilson’s lack of touch on his shot from all three levels hasn’t improved this season; establishing his spot on the bench.

Brown has taken a step backward from last season, playing fewer minutes per game and putting up an abysmal 101.6 points per 100 shot attempts (the lowest of his career) according to Cleaning the Glass. The only real PT he’s received recently has been when head coach Mike Budenholzer wants to give his team a shot in the arm. Otherwise, it’s been a lot of bench duty for the soon to be restricted free agent.

A lights-out shooter his entire career, Korver has done exactly what’s been expected of him this season, as he’s made 41.5 percent of his threes. He’s a major liability on defense, apparently playing under different rules than the rest of his teammates and often over-helping. The latter was anticipated as well.

Milwaukee wanted to ensure they had they ability to put a seven-foot rim-protector on the court at all times and that’s exactly what they’ve received from Lopez. Of all players to contest at least four shots within six feet of the rim this season, he’s tied for first (spoiler: The other first-place contestant will come lower on this list) by only allowing a 44.1 percent success rate. Oh, and he’s also knocking down a surprising 34.4 percent of his 1.6 threes per game on the other end.

A buyout acquisition, Williams has only played 11 games for the Bucks and has been underwhelming. He’s played fine defensively, showing off his above-average agility at power forward despite taking some time to learn the system. He’s struggled shooting from downtown and is only connecting on 29.6 percent of his threes.

Despite falling out of the rotation since Williams’ arrival, Ilyasova played pretty well for most of the season (outside of his slump that led to the signing of Williams). After playing for Turkey last summer, it appears he’s hit a wall. He already lost a step defensively this season and that was only exacerbated in weeks leading up to his benching.

Secretly, Connaughton has had a disappointing season for the Bucks, as his shooting efficiency is down and his turnover percentage is way up from a season ago. When he’s on the court, his team gives up 9.1 more points per 100 possessions and scores 2.5 fewer according to Cleaning the Glass. He’s somehow been able to hang on to a regular spot in the rotation despite all this, but don’t expect that to continue if there’s postseason play. (P.S. I’d be remiss if I didn’t mention his elite rebounding and shot-blocking for a wing—perhaps, the only thing saving his grade.)

A lot of people were wondering how Milwaukee was going to improve upon a 60-win season that saw them capping out in the 2019 Eastern Conference Finals. Look no further than DiVincenzo. After missing most of his rookie campaign with injuries, he’s been a spark plug off the bench, providing the Bucks with anything and everything they’ve needed. Most notably, he’s an excellent off-ball defender; often jumping passing lanes and igniting fast break opportunities.

After struggling for most of the 2018-19 regular season with the Bucks, Hill caught fire in the playoffs. That flame-throwing has carried over to this season where he’s made 48 percent of his outside shots. Furthermore, he’s provided excellent defense as a combo guard and can stabilize the point guard position when Bledsoe is in one of his funks.

On the surface, Matthews doesn’t contribute much, as the fifth member of the starting lineup. His field goal attempts and true shooting percentage are well below his career-averages. And that’s exactly what he signed up for. Matthews knew the sacrifices he’d have to make to his individual game and has done so without complaint. He also does a very nice job on the opposing team’s best wing scorer every single night, freeing up Middleton to become an efficient-scoring monster.

Lopez has dominated the paint area this season and is a true contender for the Defensive Player of the Year. He’s unsurprisingly the other player who’s tied for first in the NBA in opponent field goal percentage six feet and closer. His grade would be much higher if he could hit a damn shot from behind the arc! Since he began chucking with volume in the 2016-17 season, he’s never shot lower than 34.6 percent; until this season where he’s below the 30-percent threshold. Yuck!

Bledsoe is a key cog in the Bucks’ machine, perhaps, the most vital one if they want to win a championship. Outside of Antetokounmpo, he’s the only player who can get to the rim on a regular basis, and finish—he has a 67 percent conversion rate within four feet of the basket according to Cleaning the Glass. His defense has dropped off from a year ago, but he’s still very good at the point of attack. The biggest factor lowering his grade is his inconsistent play.

After signing a five-year, $178 million extension last summer, Middleton has responded in full on the first year of the deal. His usage rate is as high as ever, as is his points per 100 shot attempts and assist percentage according to Cleaning the Glass. Oh, and his turnover percentage is lower than any other season not named his rookie year. When people say the Bucks don’t have a second star, you only have to point them to the season Middleton is having.

After setting records and winning awards in the 2018-19 season, Antetokounmpo responded by…setting more records and (probably) winning more awards. Not one to rest on his laurels, he’s been even better this season; showing he’s determined to diversify his game and avoid a postseason collapse like last year. He’s carried his team on offense all while running another incredible Defensive Player of the Year campaign.

‘Star Trek: Picard’ Is Now Free For Everyone And You Should Absolutely Watch It

Win, Then Play: Make Money Before You Spend A Cent

Whom And What To Blame For Kamala Harris’...

La Liga Lead At Risk: What We Learned...

What You Need To Know About The Coronavirus...