Quadruple Witching, Nike Earnings Both In Focus Ahead Of Holiday Season’s Approach 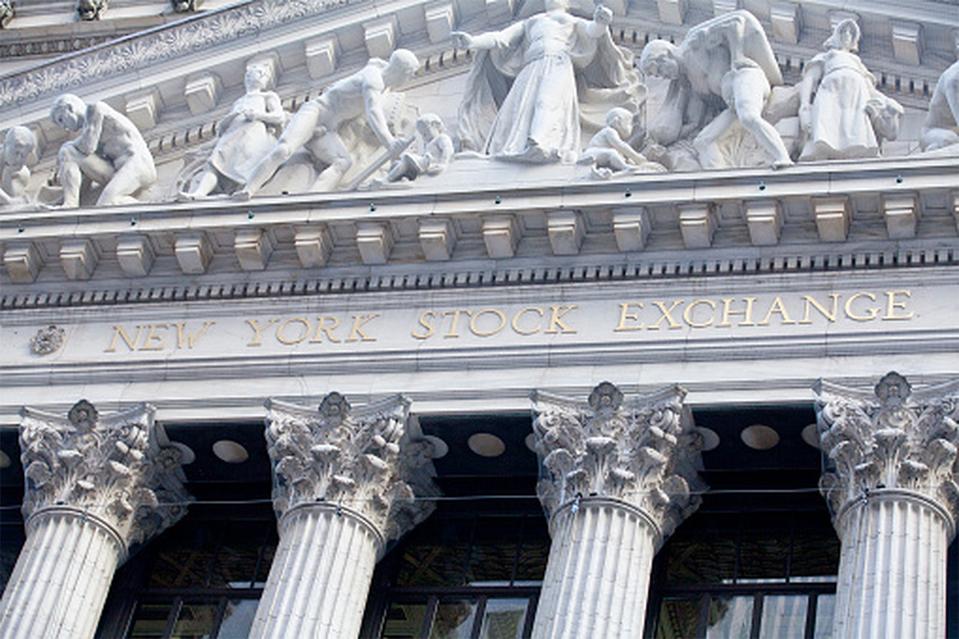 The big-volume session some people were expecting this week hasn’t come yet. Today is the last chance, and might be for a while when you consider the next two weeks are holiday-shortened and many participants are likely to be absent.

With quadruple witching today as contracts for stock index futures, single-stock futures, stock index options, and stock options all expire, maybe things will get exciting. It only happens four times a year and often features market participants rushing in to try and roll over risk. If you’re doing any trading today, it might be prudent to move in and out of the market with extra care.

Another factor today and in the coming week could be some “window dressing,” which is when fund managers massage their portfolios to make sure popular stocks are included before those quarterly statements go out to clients. This can sometimes mean additional acceleration for some of the better- performing stocks of the last three months.

Investors who haven’t left for the holidays yet are following a bunch of developments early Friday, including hopes for a Phase One trade deal signing in January, Nike (NKE) earnings, House approval of the United States-Mexico-Canada Agreement (USMCA), and a heavy dose of data.

The big data point of the morning was the government’s final estimate for Q3 gross domestic product (GDP). It came in at 2.1%, in line with consensus expectations and unchanged from last time. People might be more focused on Q4 GDP at this point, but the first reading won’t be available until the end of January.

A little later this morning, investors will get another read on inflation with the Personal Consumption Expenditures (PCE) price index for November. This is an interesting one to watch because the Fed tends to follow it closely.

Shares of NKE slid a little after its quarterly numbers flashed late Thursday. Though the company beat analysts’ consensus on earnings and revenue, its North American revenue and gross margin expansion came up short of some analysts’ expectations. Overall, though, it’s hard to find a lot to complain about with the report, so maybe the selling reflected a “sell the news” type of scenario. The stock was up 36% for the year as of Thursday’s close.

After NKE reported, several analysts raised their price targets for the stock. However, shares were still lower in pre-market trading early Friday.

Starting at the Top

Thursday was another sleepy day on Wall Street, but one that reversed Wednesday’s losses and sent major indices to new highs, with nine of 11 sectors finishing higher. The S&P 500 Index (SPX) clawed its way above 3200 for the first time ever.

Commodities had a nice day, too, with crude and copper well into the green. Crude continues to stage a nice little rally, and that’s often a sign of better global economic health. A weaker dollar appears to be helping commodities (see chart below).

Still, the “risk-off” assets like bonds and gold also rallied Thursday, so it seems like market participants want to have things both ways. The 10-year yield, which looked early on like it might attempt a rally toward 2%, got shy near 1.95% and retreated back toward 1.9%. It’s possible that risk-off is still getting a bid as investors await an actual signing of the Phase One trade agreement, as well as the horse-trading process between the UK and the EU that’s likely to accompany Brexit in the coming months.

Meanwhile, Cisco (CSCO) rose 2.66% Thursday after an analyst upgrade. The stock is up 13% this year, which most investors would probably be happy to take year in and year out but isn’t keeping up with the Nasdaq (COMP) this year.

This was a nice upgrade, with positive focus on the company’s key network services segment. CSCO is one of those companies that has a really good grasp on the global economic environment, so it can be wise to listen to their earnings call. An upgrade on CSCO is kind of like an upgrade on business worldwide because of the company’s global reach.

After the pre-opening bell data, a little more is on the way. University of Michigan sentiment for December is due mid-morning. That wraps things up for this week, but new home sales for November come out Monday. 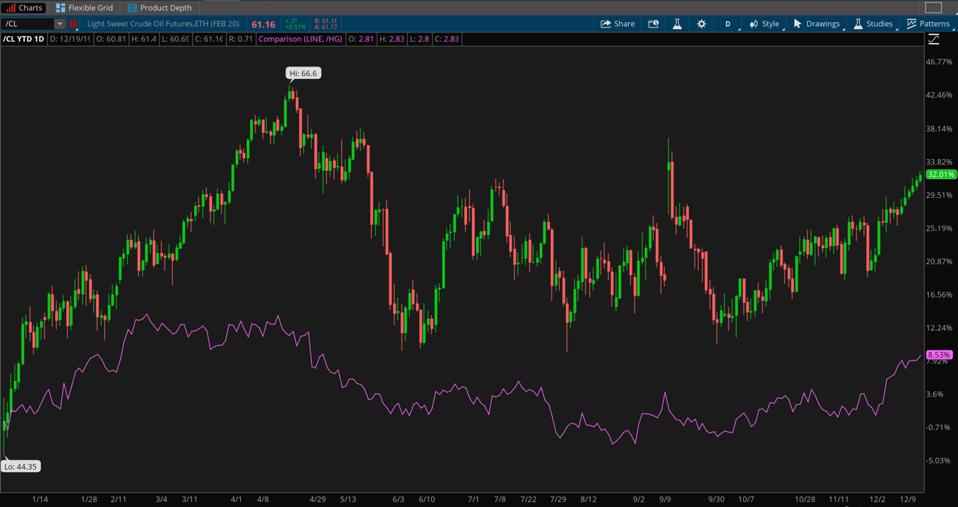 CHART OF THE DAY: CRUDE AND COPPER SEE UPTICKS. A lot of people have focused on crude’s … [+] (/CL-candlestick) recent rally to above $60 a barrel, but another commodity—copper (/HG-purple line)—also broke out of a long period of weakness this month. Strength in these products sometimes reflects strength in the global economy as well as a softer dollar, but too much strength could stir inflation talk. Data Source: CME Group. Chart source: The thinkorswim® platform from TD Ameritrade. For illustrative purposes only. Past performance does not guarantee future results.

Open House? Maybe Next Month: Just when it looked like housing was on the road to recovery, November existing home sales delivered a disappointment on Thursday. While no single data point is a trend and we saw housing starts and building permits come in solid as brick earlier this week, the existing sales still appear to show some barriers to a better housing picture. Sales at a seasonally-adjusted annual rate of 5.35 million compared with the Briefing.com consensus of 5.45 million and were below October’s downwardly revised 5.44 million. In an economy with full employment, low mortgage rates, and decent gross domestic product growth, you might expect existing home sales to make steady gains. However, high prices and low supply apparently helped keep some buyers away from open houses last month. The key to housing strength in the new year could be continued jobs health, so we might see home and job data march hand in hand in 2020.

Another Soft Earnings Season Seen Approaching: We come right out of the holidays and into Q4 earnings season once January begins. Though Q4 results get unveiled in 2020, it looks like the earnings chill that descended in 2019 hasn’t begun to fade with the new year’s approach. The latest reading on anticipated Q4 outcomes from S&P Capital IQ is a negative 1.4%, worse than the negative 0.6% recorded in Q3 and the firm’s estimate for a 2019 cumulative figure of 0.6%. While things are expected to improve in 2020 with 8.2% earnings growth, it’s a bit of a conundrum when you consider that the SPX is up more than 26% this year on anticipated 0.6% earnings growth. That could mean some of next year’s potential stock market gains might have been “pulled forward,” which could help explain many analysts’ calling for just mid-single digit SPX growth in 2020.

Planning Ahead: We often talk about patience, especially the importance of ignoring the noise and sticking to your long-term plans. An article in the latest issue of Barron’s kind of crystallized that by highlighting the best-performing stock of the last 30 years. It’s not Microsoft (MSFT) or Apple (AAPL). It’s Jack Henry & Associates (JKHY), a Missouri firm that provides technology to banks and other financial firms. If you’d invested $1,000 in its stock on Sept. 30, 1989, you’d have had $2,763,000 as of this Sept. 30, Barron’s said. In contrast, $1,000 invested in shares of Warren Buffet’s Berkshire Hathaway (BRK) back in late 1989 would have rolled up to “just” $36,000 by this September. The same amount invested in the SPX then would now be worth $16,000.

The lesson here isn’t that investors have to hold onto the same stock for 30 years. As the article points out, that’s extremely uncommon on Wall Street, where small-cap funds tend to drop companies when their market cap gets too big, for example. However, long-term investors arguably have an advantage, because they can weather the ups or downs of a stock better than a fund that’s under the microscope to always beat competitive offerings (JKHY had a 16-month stretch in the early 2000s when it fell 67%—would you have held on?) So the next time you have a stock that’s not performing, check under the hood. If everything looks relatively healthy, it might pay to not lose patience if it still fits into your long-term goals. Because ultimately, it’s about earnings and solid management when you choose a company to invest in, and not so much what the overall market might think at any given moment.

Taylor Swift Proves Her Longevity Once Again On The Billboard 200

Novogratz On Bitcoin & Beyond: Redefining The Digital...

An Updated Look At How Various Countries Are...