Rams Need Gurley And Goff To Be Super Again To Rebound 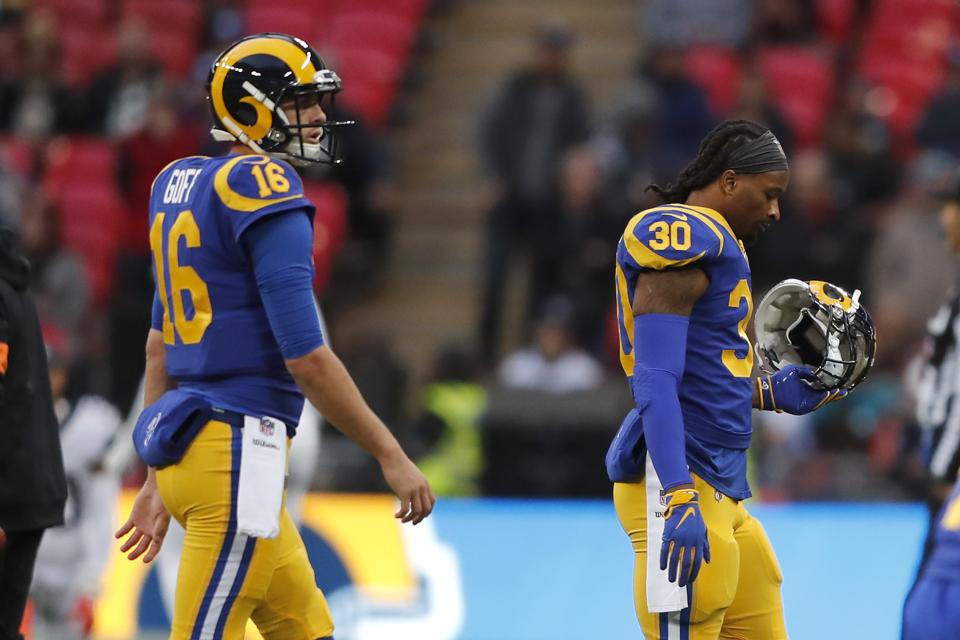 Los Angeles Rams quarterback Jared Goff (16) and running back Todd Gurley (30) need to give the team … [+] more bang for the big bucks they earn for the Rams to return to the playoffs. (AP Photo/Frank Augstein)

For the Los Angeles Rams to get back in the money they need two players to earn their keep: Todd Gurley and Jared Goff.

The Rams were preparing for their Super Bowl close-up this time last year, thanks to the play of their dominating running back and spot-on quarterback.

But L.A. is home this week after a 9-7 campaign that left it with its nose pressed on the outside of the playoff window. Among the reasons for the Rams rubbing their temples with their Super Bowl hangover was the uneven production from Gurley and Goff.

After snagging a $45 million guarantee on the eve of the 2018 season, Gurley paid immediate dividends. He paced the league with 17 rushing touchdowns and added four more receiving as the Rams won the NFC title.

That paled in comparison to last season, when L.A. went with a load-management approach to counter the wear-and-tear on his sore left knee. Gurley had 14 total touchdowns with 33 less carries and 28 fewer receptions despite playing in an additional game.

Goff’s bank account swelled with a record $110 million guarantee just prior to the Rams lifting the curtain on their most recent season. The year before his rich deal, Goff threw for 32 touchdowns and only 11 interceptions.

But his encore season hardly brought with it an appreciative bow. He was picked off 16 times and countered it with 10 fewer scoring heaves.

Can the Rams rebound next season and get back in the postseason as they christen their $5 billion SoFi Stadium?

Of course, as this remains a team with weapons on both sides of the ball and a young coach who’s reached the playoffs in two of his first three seasons.

But the Rams also know their salary cap situation isn’t as friendly as it was before they made their Super Bowl 53 run.

Cooks is another member of the fab five that needs to soar in 2020. Dogged by concussion issues, Cooks’ production dove from 80 catches for 1,204 yards and five touchdowns to 52 receptions for 583 and two.

Donald and Ramsey once again played at Pro Bowl levels. Paying the big bucks for big-time performers isn’t what has potentially painted the Rams, who don’t have a first-round pick the next two years, into a corner.

The key for them to make it pencil out with fewer bucks to spread around the roster is for Gurley, Goff, and to a lesser extent, Cooks, playing to their pay stubs.

If not, the Rams, who had won consecutive NFC West titles before stubbing their toe in ‘19, will be challenged to keep pace with the San Francisco 49ers and Seattle Seahawks.

The 49ers are facing the Kansas City Chiefs in Super Bowl 54 on Sunday after winning just four games in 2018.

They’re a prime example of how quickly things can turn in the NFL, something the Rams know all too well. It was a lesson L.A. absorbed after key players neglected to provide their anticipated value.

Perfect Weekend For FC Barcelona Sees Them In...

Hitting A Wall And Pushing Through

How Billion-Dollar Film Franchise ‘The Secret Life Of...