Real Madrid And Barcelona: El Clasico In The USA To Inaugurate NFL Stadium 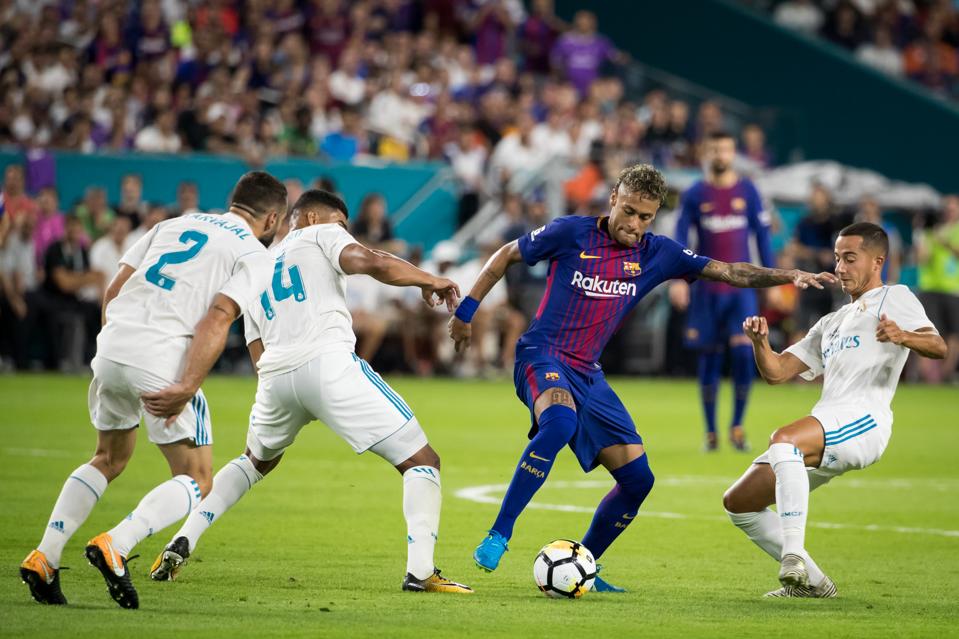 Neymar was still a Barcelona player the last time that the Catalans faced Real Madrid in a Clasico … [+] on US soil. (Photo by Ira L. Black/Corbis via Getty Images)

Back in 2017, Real Madrid and Barcelona contested the first Clasico fixture to be played on American soil.

Miami’s Hard Rock Stadium was the venue for the International Champions Cup pre-season encounter, which was Neymar’s last game for Barca before his world record transfer to Paris Saint-Germain.

On that occasion, the Blaugranes won 3-2, and news of the possibility of another match between Spain’s ‘big two’ playing in the US has already seen a surge of commercial interest.

Now it’s being mooted that the two teams help inaugurate a new NFL stadium as part of their pre-season preparations, and this time it’ll be the west coast that will get to see Europe’s finest in action.

The two venues currently under consideration are the SoFi Stadium in Los Angeles and the Allegiant Stadium in Las Vegas.

The former will be the future home of the Los Angeles Rams and Los Angeles Chargers, whilst the latter will be home to Las Vegas Raiders.

Given that the ICC fixture will take place in August, it will be before any other sporting fixture takes place at either venue.

Relevent Sports who are the organisers of the tournament, will be hoping that any new Clasico derives the same level of interest as the last.

It’s entirely possible that it could be Neymar’s first fixture back in Barcelona colours if his former team follow up alleged interest in the Brazilian.

In any event, the long-standing rivalry between the two teams always ensures that their tussles are never ‘friendly’ despite being billed as such.

There might be less riding on the outcome in terms of prestige or silverware, but professional pride in this fixture matters perhaps more than any other.

Being pre-season, it also offers supporters the chance to get to see any new players, and given that Spanish football is trying to gain a bigger foothold in the American market, another US Clasico makes sense.

The SoFi Stadium is likely to cost somewhere in the region of a mammoth 4.9 billion dollars, but this will include a retractable roof, commercial and entertainment areas, a surrounding complex, and ‘the Oculus‘ – an ovular, double-sided video board that will be suspended from the roof over the pitch.

The Allegiant Stadium comes in at what could be considered a bargain 1.9 billion dollars, will sit 61,000 fans and is to be located at the end of the Las Vegas Strip.

Both stadia will be future proof and will enhance the match day experience for those supporters who attend.

Quite what the NFL-going public will think about their stadiums being used for soccer, particularly to open them, is anyone’s guess.

Michael Avenatti Convicted Of Extortion, Faces Up To 47 Years In Prison

Do You Have What It Takes To Make...

U.S. Restrictions On Travel From Europe Will Intensify...

You’ve Decided To Work With A Coach —...

Four Noteworthy Technology Trends To Watch In The...