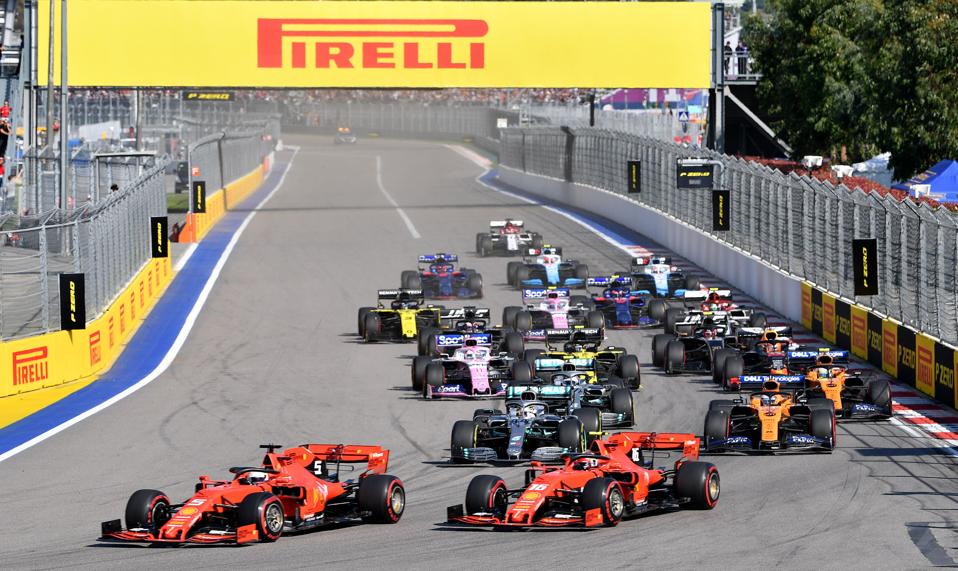 Formula One’s Netflix documentary Drive to Survive was streamed in 1 million households over its first 28 days in the sport’s home country of the UK according to data from research agency Digital-i.

It is just 9.1% of the total number of UK households with a Netflix account but that is still a turbocharged performance as it has expanded the audience of the auto racing series.

The 10-episode docu-series premiered in March last year and gave viewers a look under the hood of F1. British Production company Box to Box Films followed it throughout the 2018 championship but didn’t focus on the on-track action. Instead, it made the drivers the stars by introducing viewers to their parents and taking them on a tour of their homes as well as showing their preparation at the races. Its candid, behind-the-scenes style shone a light on the human side of what is largely a mechanical sport and this was the winning formula.

Commissioning the documentary is widely regarded as one of the smartest maneuvers that F1’s owner Liberty Media has made since it got the keys to the auto racing series in 2017. Drive to Survive has boosted F1’s exposure thanks to the 158.3 million subscribers that Netflix has on its books. This pales in comparison to the 471 million viewers that F1 claims to have but it is actually complementary.

“We understood that doing something like this that elevates new heroes in the sport has raised interest in the casual F1 fans,” said F1’s global research director Matt Roberts in a recent Q&A on discussion website Reddit. “Many people come up to me at races / in the streets and say that they weren’t F1 fans, but they are now…because of the series.”

He added that “our fastest growing audience has been the under 35s the past 2 years (helped by esports and Netflix)” though F1 still isn’t firing on all cylinders. Netflix has helped to rev up the demographics of its television audience but only 14% of its viewers are under 25 as we reported last year.

Netflix makes more of an impact geographically as its biggest market is the United States which is home to 60.6 million subscribers compared to the 671,000 who watched live telecasts of each F1 race on ESPN networks last year. in contrast, 11.5 million homes in the UK had Netflix accounts in the quarter when Drive to Survive was released according to the Broadcasters’ Audience Research Board (BARB), the organization which collects TV ratings in the UK.

Measuring the number of households which watch Netflix programming is known as reach and it is one of two ways to calculate its audience. In order for a household to be counted, at least one resident has to watch a Netflix film or an episode of a series. Crucially, the same Netflix profile is not counted repeatedly even if it watches multiple episodes of a series and this creates a level playing field for documentary films and docu-series like Drive to Survive.

In contrast, using streams as a measurement involves calculating the total number of views from every Netflix profile in a household with each episode of a series counted separately. This favors docu-series, as they have multiple instalments, and Drive to Survive is evidence of this.

Ranking the most popular Netflix documentaries in the UK by their reach puts Drive to Survive in tenth place. As the table below shows, it was beaten by a number of documentary films including Homecoming, which charts Beyoncé’s 2018 Coachella performance, and FYRE, the inside story of the ill-fated festival. That was watched by almost three times the number of households as Drive to Survive but was still only in fifth place with an audience of 3.1 million. 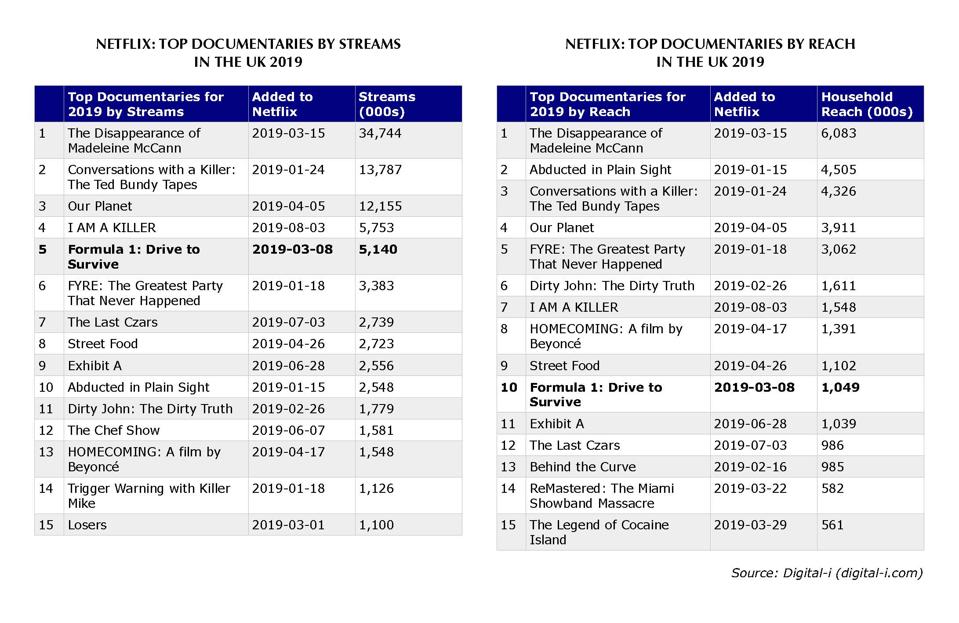 In pole position was The Disappearance of Madeleine McCann, an investigation into an abduction case that has made headlines in the UK since 2007. It was streamed by 6.1 million households and also holds the top spot when the audience is ranked by the number of streams. Under this measurement Drive to Survive accelerates into fifth place with 5.1 million views whilst films like FYRE and Homecoming reverse down the standings as they lack episodes to boost their audience tally.

With 34.7 million views, The Disappearance of Madeleine McCann had nearly three times more streams than its closest rival, Conversations with a Killer: The Ted Bundy Tapes.

In third place was nature series Our Planet followed by crime documentary I Am a Killer. That was streamed 613,000 times more than Drive to Survive over the first 28 days after release which is the industry standard window for audience measurement as the majority of the viewing takes place then.

“Drive to Survive has lower ratings that some of those big docs…but it’s understandable because the topic is more niche than Our Planet, for example,” says a spokesperson for Digital-i.

It is extremely rare to get this kind of visibility into Netflix viewing. Neither the streaming giant nor F1, which is listed on the Nasdaq with the ticker FWONK, has released audience data for Drive to Survive. Digital-i has got access to this thanks to its proprietary measurement system which it launched last year to analyze Netflix viewing. It quickly gained traction and Digital-i now provides Netflix data to the largest terrestrial broadcasters in the UK as well as a number of major US film and TV companies.

Digital-i is based in the UK and its speciality is finding new and innovative ways to analyze audiences across traditional TV channels and online platforms. Its Netflix measurement system is based on a sample of the audience and captures viewing across all devices including TV, tablet, PC and smartphone as well as content that is recorded and viewed offline.

At the beginning of each quarter it collects this data from a sample of approximately 1,000 accounts and then processes it before weighting it to make the result representative of the UK population. In a statement Digital-i said that “the recruitment process for our sample is controlled to make sure we have a panel that is representative of the Netflix subscriber base. This is guided by information from the BARB establishment survey, which BARB themselves use as the basis for their own panel recruitment.”

It added that “our sampling methodologies have been verified by leading statisticians and are statistically robust…The data allows us to interrogate Netflix viewing in great detail, including analysing total Netflix consumption, the lifecycle of Netflix content, binge viewing and much more.”

Digital-i’s sights will turn in the direction of F1 again soon when the next series of Drive to Survive launches at the end of this month. It is due to feature F1’s biggest names Ferrari and Mercedes which objected to appearing in the first series. Time will tell whether this drives up the audience.

The Dirty Truth About Hiring Experts To Build...

An Open Letter To The New NSF Director...

BenDeLaCreme Is A Business, Bitch

How Does an Owner Of A Limited Liability...

Why You Should Ask People To Rate Their...

Raise Capital Without Selling Your Soul