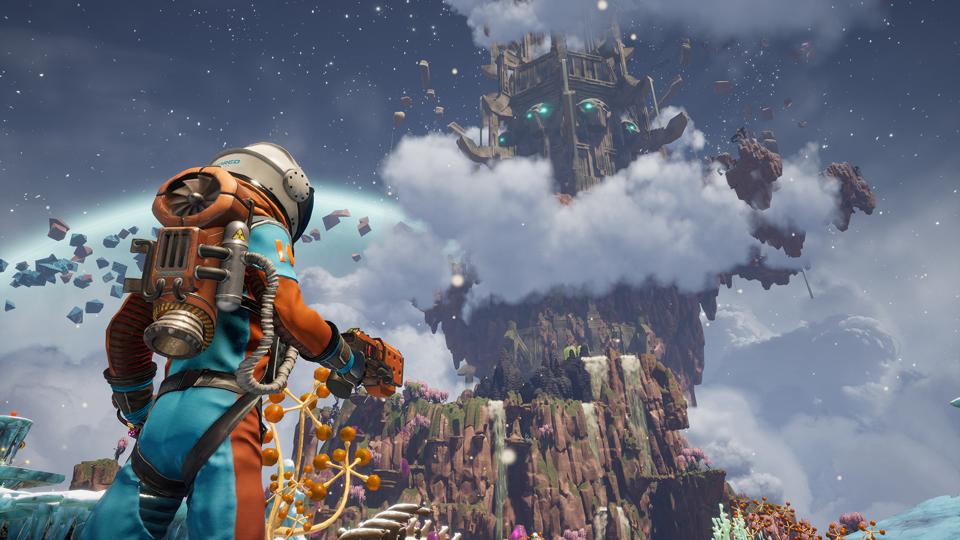 Typhoon’s debut game may have a budget price tag, but it doesn’t cut any corners.

As far as debut games go, Typhoon Studios’ Journey to the Savage Planet smashes it out of the park. Since its early teasers, it looked too good to be true, undoubtedly due to the clear parallels it draws with No Man’s Sky. Unlike its predecessor, this latest release is exactly what it promised to be from day one.

That’s not to say the game is without clear influences. NMS aside, the first ten minutes will give you Crash Bandicoot-esque music, a Borderlands palette and humor, a Portal-like robotic narrative and the floaty, slow-to-master FPS framework of Halo.

But once you’re finally thrown into its world without an idea of what’s to come, it becomes clear that Journey to the Savage Planet takes the best of its peers to create something genuinely quirky, offbeat and distinct.

A simple yet well-developed story

If previews have passed you by, the game places your faceless hero in the 2030s. As the newest recruit to Kindred Aerospace–the “4th Best Interstellar Exploration Company” led by the irrepressible Martin Tweed–you initially find yourself on planet AR-Y 26 with no equipment or plan.

Your job is to check if it’s safe for human habitation. However, your ship’s broken and out of fuel, so you need to explore, catalog any alien flora and fauna, then find fuel to synthesize and get out. Inside your Javelin spacecraft is a 3D printer to create unlockable tech you build with collectable resources, while a teleporter gradually connects you to various areas of the world.

Everything’s a learning experience, often helped by your visor-based scanner and AI guide EKO. If you die, you’re resurrected as a clone to begin again: think Void Bastards with a bit more joie de vivre, but you can bury your own former body. Exploration is entirely on your terms; you’ve got objectives, but you don’t necessarily need to follow all of them to reach your goals. 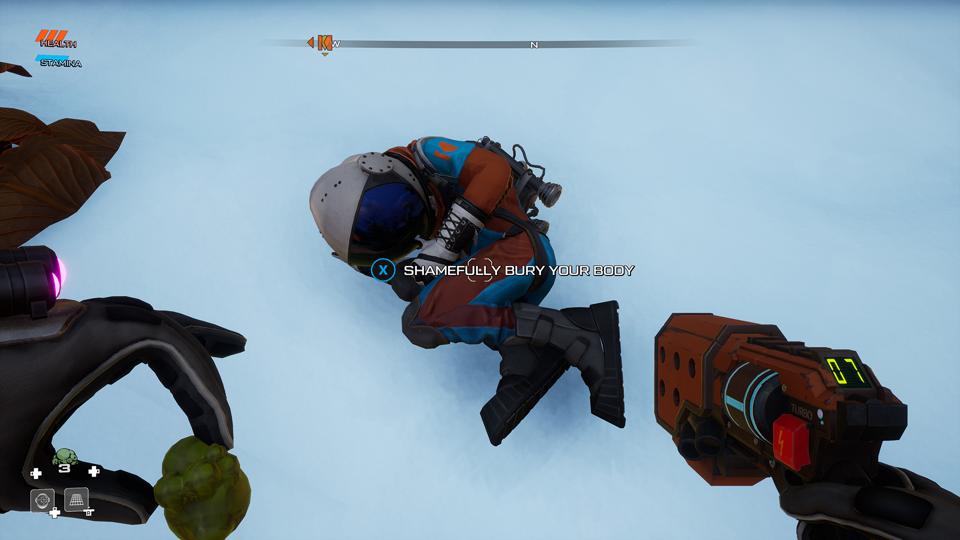 It won’t be long before you’re dispensing with your own corpse.

You can often get the measure of an experience by its achievements list, and realising that “Complete the game in under four hours” is one of Savage Planet’s more prestigious challenges, you come to realise why the game is priced at a very reasonable $29.99. But it’s not simply a game you’ll burn through in an evening, unless you want to. Chances are you won’t.

Much like your employers at Kindred Aerospace, you soon find yourself trying out each and every upgrade, throwable and ability to explore the expanse around you. From bouncy platforms and bomb-proof gloves to grappling beams and mulchy bait, everything has a purpose and works around any style of play. Nooks, crannies and pathways litter the landscape.

All the while, the game doesn’t hold your hand, but it doesn’t need to: it’s intuitive and most importantly fun, making exploration both exciting and intriguing.

Stunning in its own way

Graphically speaking, Savage Planet isn’t going to win awards, but it’s idiosyncratically attractive, channeling a unique art direction with the help of carefully conceived alien creations. The draw distance is particularly impressive, though faraway creatures have the strange habit of dropping to two frames per second.

The photo mode, which feels part and parcel of the game’s universe by making you take shots with a remote drone, only celebrates your surroundings. Much like my experience with Star Wars Jedi: Fallen Order, I found myself constantly looking for points of interest just to get the best angles and take shot after shot. 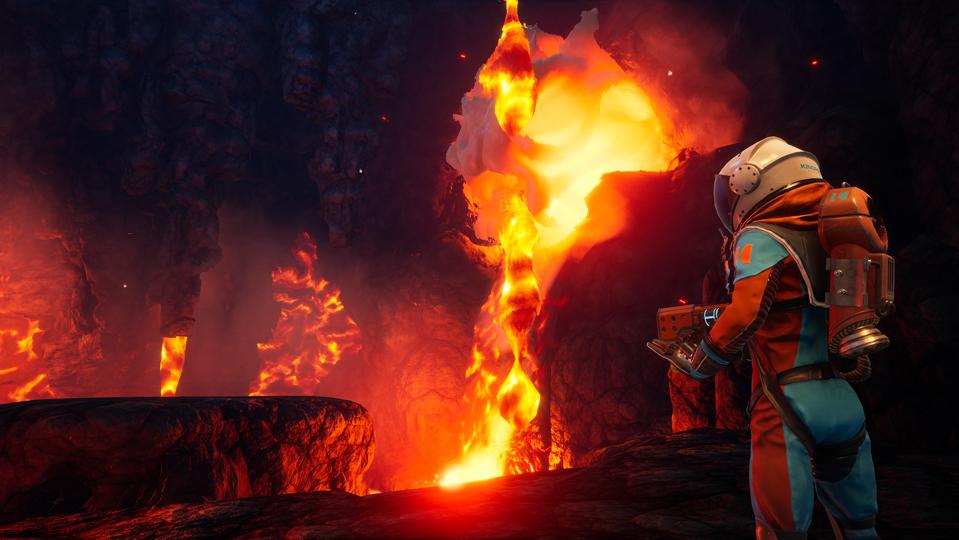 As hazards vary wildly from location to location, you find yourself learning from mistakes quickly.

Within minutes of your first encounter with the cute, fragile and thoroughly expendable Pufferbirds, you learn the three core elements of your travels: carbon, silicon and aluminum, which can be harvested from aliens or the wider surroundings. These, alongside alien alloy, are all you need to upgrade your technology, which in turn makes the planet more explorable.

On top of this, orange orbs are eaten to improve your health and stamina, teleportation areas allow you to fast travel around the landscape (a godsend, given there’s no map), while you can scan animals, plants and more to learn about your surroundings. Even if you do fly through the main story of Savage Planet, there’s plenty to keep coming back to, and it’s not overwhelming; upgrades let you track everything down.

A great sense of humor

At first, it’s easy to worry that the comedy elements of Journey to the Savage Planet will be cringeworthy. I never clicked with the personality of Borderlands, especially the insufferable and sadly immortal Claptrap (don’t @ me), but Savage Planet‘s humor never feels as forced. Martin Tweed, in particular, is a delight: a cross between Elon Musk, Cave Johnson and Doc Brown. 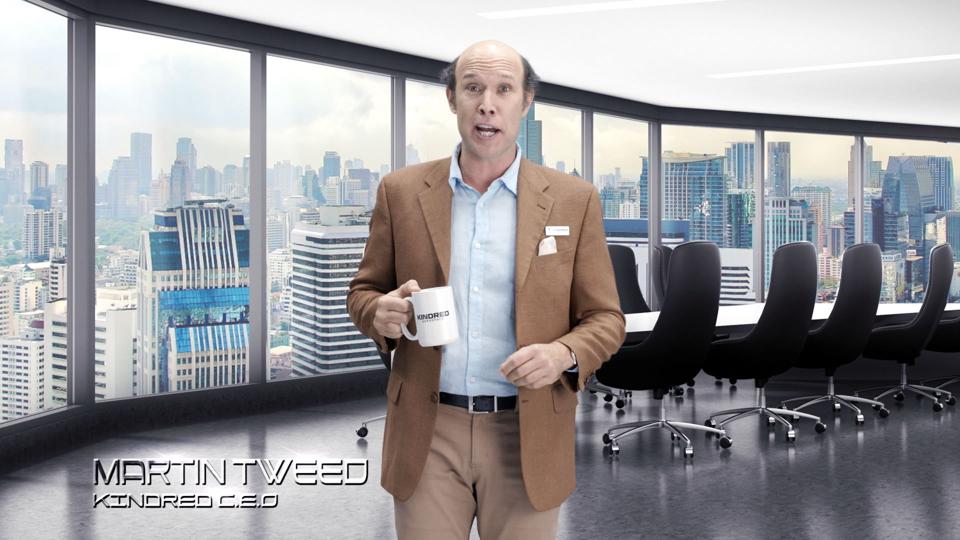 Martin Tweed, your off-the-wall guide and mentor during your travels.

But the best moments come from your own silent protagonist, who reacts to death, their surroundings and story elements with Vaudevillian levels of overacting. It’s a small touch, but one that complements the game’s ostentatiousness to a tee. The inclusion of a deft, backhanded slap also makes for one of the most satisfying melee attacks in modern memory.

While it’s easy to love the relentless dystopia of Journey to the Savage Planet, one of the few criticisms I have is the more mature end of its humor. It’s not that it isn’t funny–there are some real laugh-out-loud moments–but the lewd jokes and language don’t quite land well enough to justify including them, given it’s ultimately at the expense of allowing younger gamers to play.

I’m far from prudish, and it’s hard not to enjoy the farcical comedy of “cucumber s***water”-flavored food and the horrifically cancerous effects of AR-Y 26. However, these inclusions are hardly world-building nor as well-realized as the capitalistic, dystopic humor of other elements of the universe (the “Mini Mall Monkeys” ad is a particular treat). 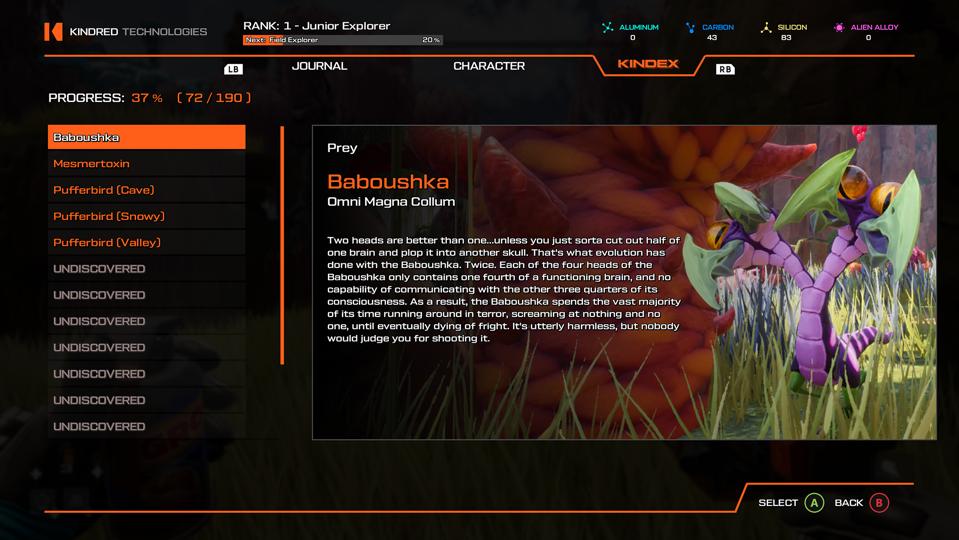 Throughout the game, you add to your Kindex with all manner of things, though few things top the … [+] Baboushka.

For just under $30, Journey to the Savage Planet is a great addition to anyone’s library. While its replayability is in question, players will get more than their money’s worth from a fun, exploratory experience that can be played at any pace.

It’s just a shame that Savage Planet is Typhoon’s last game as an independent outfit; it became part of the Google Stadia team in December 2019. Yet given the rocky start for the streaming console, Stadia needs all the help it can get in 2020. This acquisition should prove an inspired one.

Journey to the Savage Planet is available from today for Xbox One, PlayStation 4 and PC, with an RRP of $29.99.

Disclaimer: I was provided with a copy of Journey to the Savage Planet in exchange for a fair and honest review.

After A Cancer Diagnosis And Nine Months Away From Her Show, This Performer Triumphs On Broadway In Mean Girls

The Role Of Human Judgment As A Presumed...