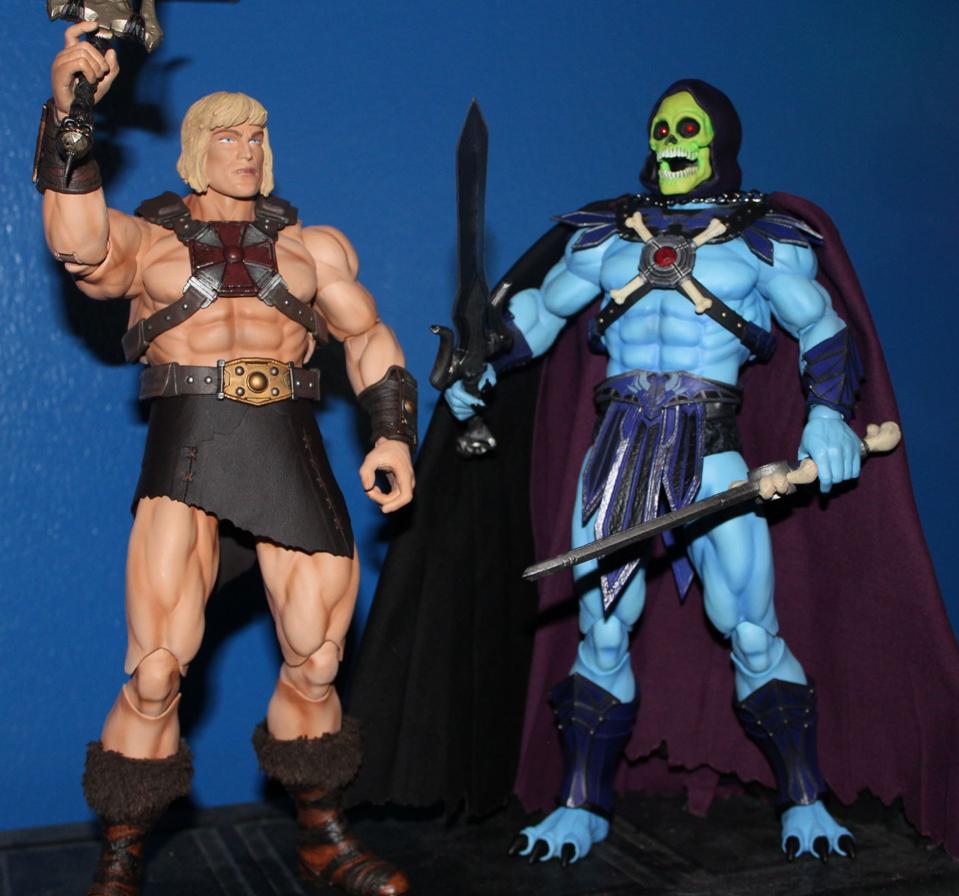 At the height of its popularity, Mattel’s Masters of the Universe toy line brought in as much as $350 million (in ‘80s dollars) annually for the company. And while He-Man, Skeletor, and the catchphrase “By the power of Grayskull!” are firmly entrenched in the pop-culture consciousness, attempts to revive the brand at mass retail mostly failed. There was that “New Adventures” sci-fi spin in the early ‘90s and the full reboot circa 2002, but the relaunch with the most longevity proved to be Classics, a 2008 series of mail-away, made-to-order collector figures that is still technically going. (Mattel recently sub-contracted the line out to indie company Super7, whose last series of figures is due this month, as Mattel has called for the line to go on indefinite hiatus so as to not compete with their own immediate plans.) 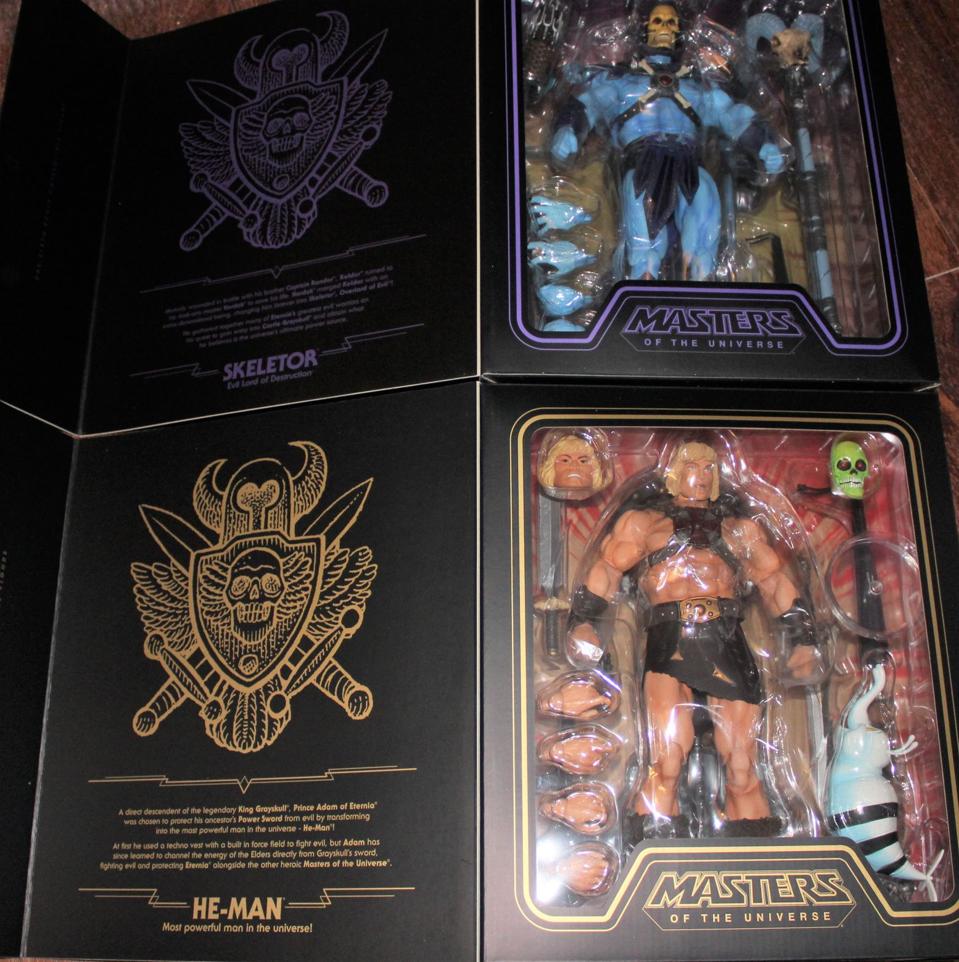 Masters of the toy box.

But aside from a couple of rare 2002 action figures, and a line of dolls based on the spin-off She-Ra character, Mattel has never really pushed a full 12-inch line. Mondo Toys recently took up the slack on that, and has made its own highly detailed figures inspired by all creative eras of He-Man and the Masters of the Universe. With prices hovering around $170, these are not intended for kids to play with. Like the Classics line, they’re looking for longevity by appealing to grown ups who were inspired by the characters as kids. 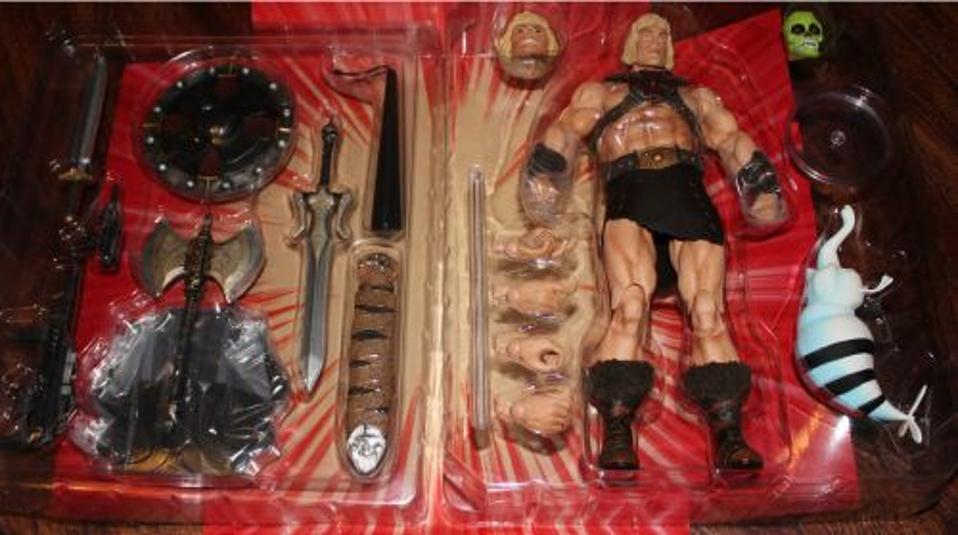 He’s kind of a…man at arms?

As with most previous MOTU figures, the Mondo figures use a universal muscular base body with some character-specific modifications. Knees are double ball-jointed; elbows are hinge-and-ball jointed. Shoulders, ankles, hips, wrists, neck and mid-torso have ball joints too; only the waist is a simple hinge. In addition, Skeletor has a hinged jaw and a face that is attached to his hood via another ball joint. 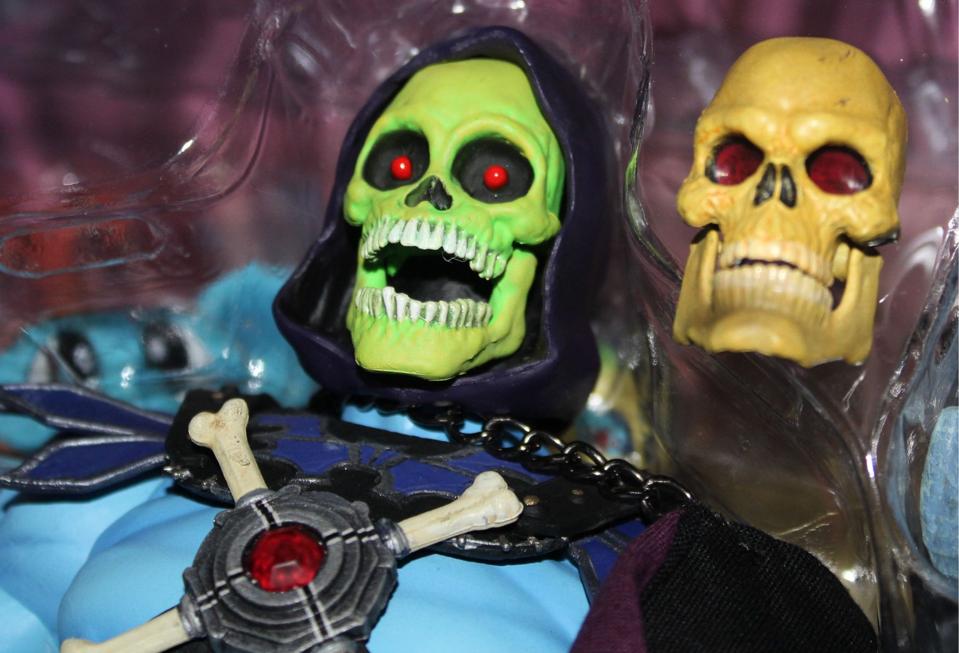 Most Masters relaunches have kept the bright primary colors and animated exaggeration. Mondo, however, is going for a more detailed fantasy, creating ultimate versions of the characters that feel more like what we as kids imagined them to be in a realistic universe. Their muscles may be unfeasibly huge, but the costumes look like real regal and battle gear. Airbrush-style highlights make each muscle pop, while shiny details give the armor pieces an appearance of having been forged. Nods to the 1987 live-action movie are in effect, as He-Man comes with a William Stout-styled blaster, and the Mondo exclusive version of Skeletor comes with the film’s McGuffin, the Cosmic Key. 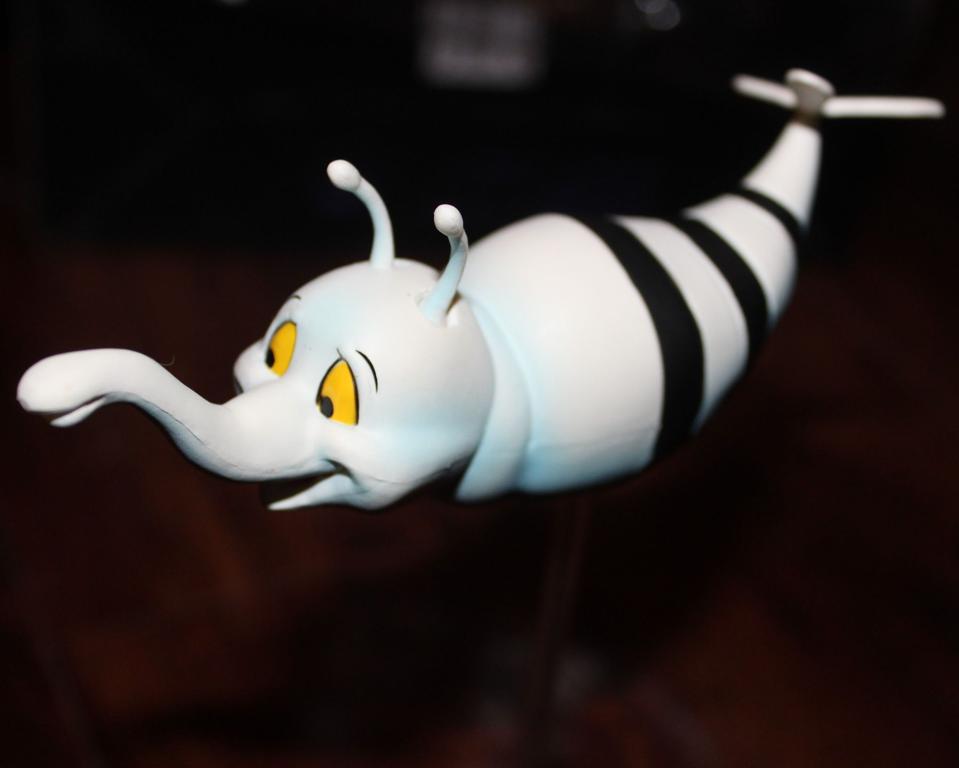 Yet there are also nods to the Filmation cartoon, as both He-man and Skeletor come with literal cartoon sidekicks. For Skeletor, it’s the space puppy Relay, that briefly gave him uncomfortable good feelings in The He-Man and She-Ra Christmas Special. For He-Man, it’s Burbie, a flying elephant/bumblebee hybrid. Both sport limited articulation, with both of Burbie’s antennae on ball joints. 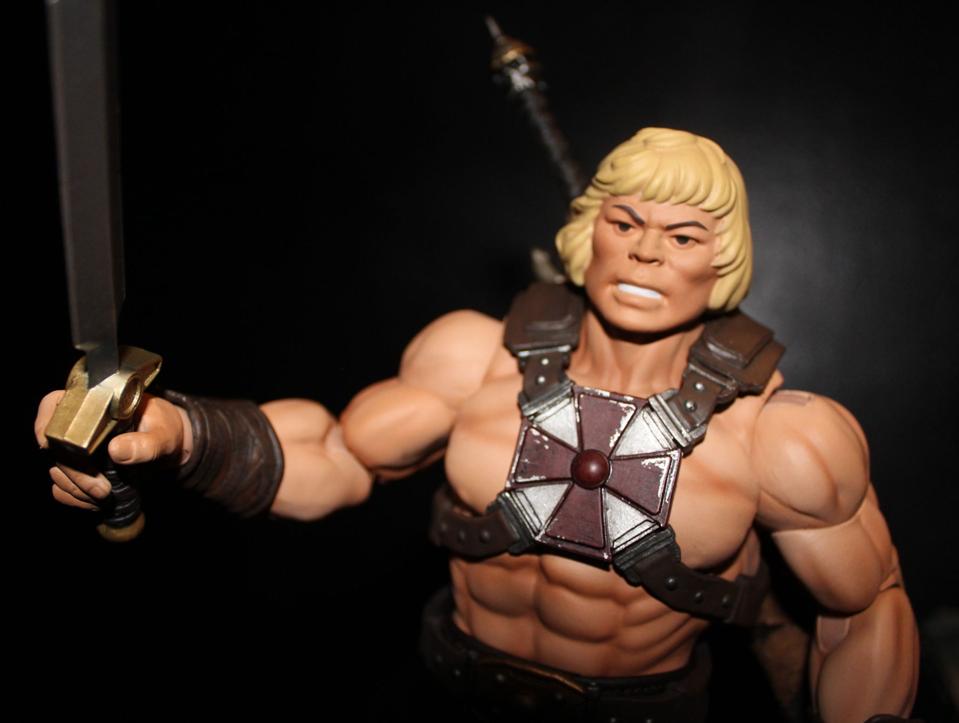 I have the power…to be ugly!

Classic toy get representation too, as the toys come with alternate heads based on the original Mattel figures. Upsized with no added detail, they mainly make the characters look like they’re wearing Halloween masks. Seems unlikely any collector will display them this way, but the option is there. 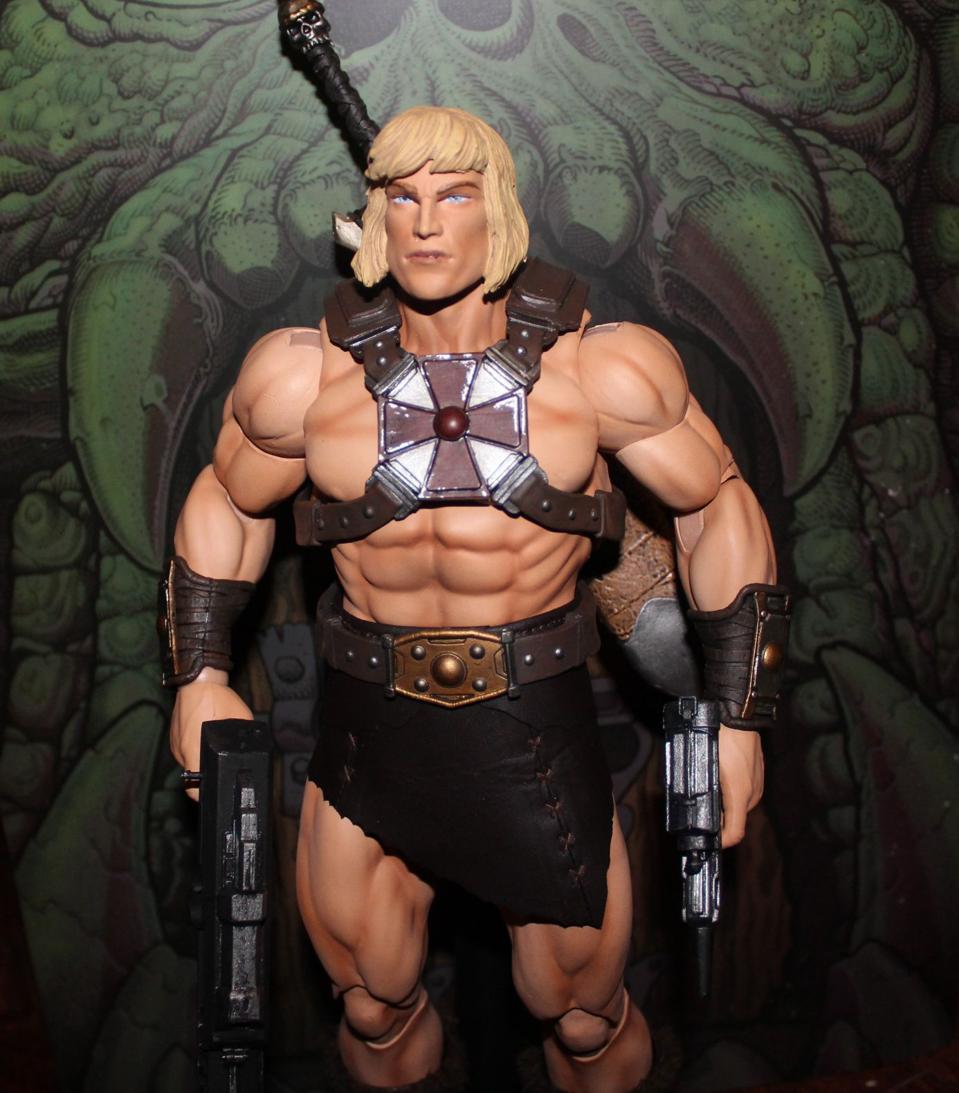 By the power of Grayskull!

An entire arsenal of weapons rounds out the packs. He-Man comes with his classic power sword, shield, and ax, along with updated version of the old Castle Grayskull laser machine gun and short sword. Skeletor has his ram staff and power sword, along with “realistic” versions of his animated bone sword and crystal ball ax. Both figures have scabbards that can hook on to the back straps of their armor. But this takes care, because the hooks can pop out quite easily. It’s the same with He-Man’s shield — the hand-holds also pop in and out. It can be an exercise in frustration to get them just right, and also demonstrate why these aren’t toys for kids to play with. Skeletor’s removable cape has a large v-cut in the back to allow room for the scabbard.

I’m not crazy about He-Man’s pleather loincloth — the classic furry shorts are sculpted underneath — but I haven’t felt bold enough to remove it when there seems no easy way to do so without damage. For other interchangeable parts, like hands and head, they come off really easy on He-Man, and require slightly more of a tug with Skeletor. The Mondo exclusive He-Man comes with a bonus extra face for Skeletor, based on Alfredo Alcala mini-comic art, and that’s the hardest thing to swap out, given that Skeletor’s skull is attached to his hood by a high and deep ball joint under the forehead. Worth it, though. For anyone who liked the toys before any other version, Alcala’s Skeletor is definitive. 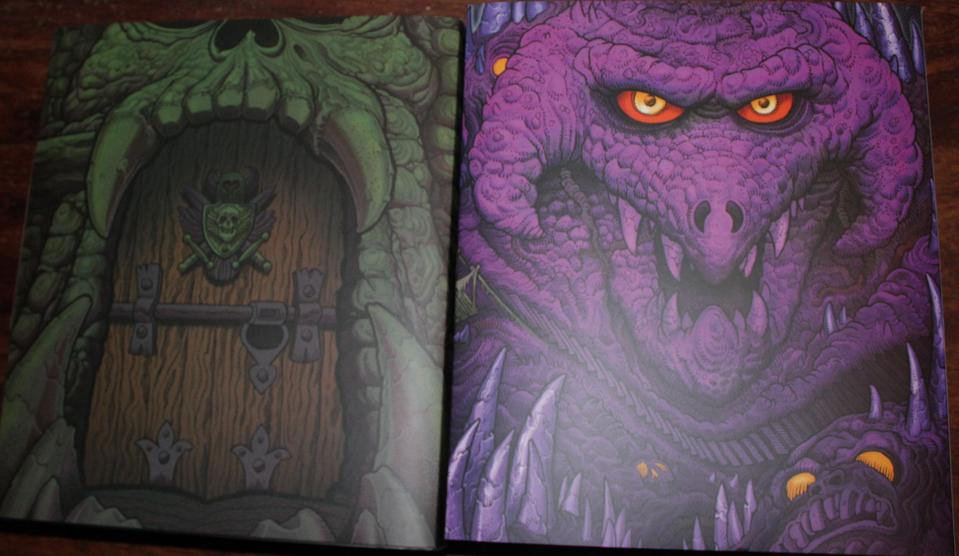 Both figures come with stands featuring the Mondo Toys logo, and hooks to go between their legs for standing support. The packaging is mostly collector friendly if you can remove tape carefully — the boxes are beautiful, featuring original, Mondo-style artwork of each character, and slipcovers depicting either Castle Grayskull or Snake Mountain, depending on the figure’s allegiance. (Here’s hoping for a new Fright Zone design when we get Hordak.) 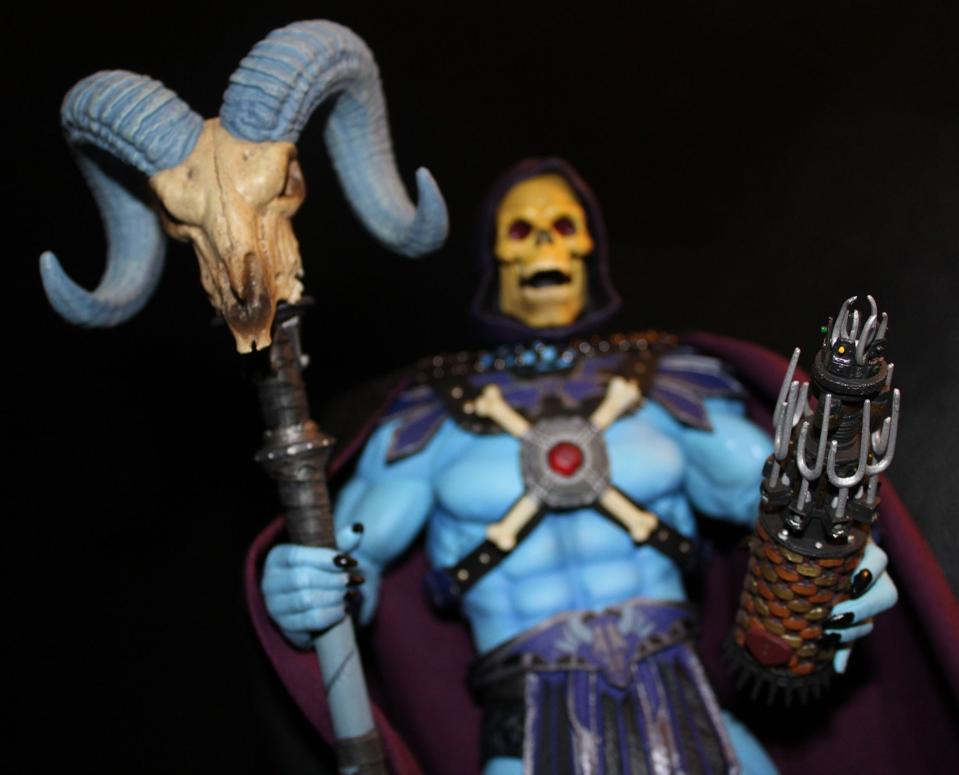 While I have some minor nits to pick — He-Man is just a touch too square-jawed; Skeletor’s cape a tad unwieldy — this is exactly the kind of aesthetic I’ve always dreamed of seeing on these mythical (to me) characters. They are larger than life, but they feel realer than ever. I preordered the latest, Scare Glow, the day he went on sale. (He-Man and Skeletor were provided as review samples, and clearly they got me hooked.)

I don’t know how many feel the same, as I’m a little surprised they aren’t sold out yet. If you do, you might not want to leave it too long.

The New Year Is Going To Be Excruciating For Europe

It’s Not Just About The Cars – Filling...

Which Data-Rich Industries Will Thrive In The Age...