Home Technology Review: ‘Through The Darkest Of Times’ May Seem Simple, But It’s A Challenge For The Ages
Technology

Review: ‘Through The Darkest Of Times’ May Seem Simple, But It’s A Challenge For The Ages 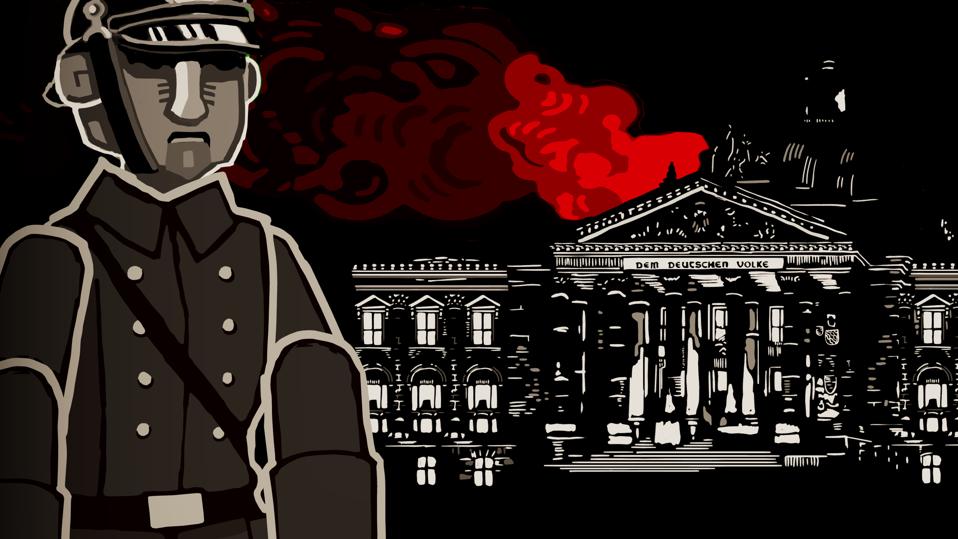 ‘Through the Darkest of Times’ puts you at the center of Berlin’s Nazi resistance.

Imagine a time when civil liberties are being eroded in plain sight. Established norms of democracy and freedom are being challenged both quietly and overtly; many look on, actively and unquestioningly cheering these initiatives while others dispassionately accept there’s nothing that can be done about it. Even another election–or even a protest–may do nothing to reverse the trend.

Welcome to Through the Darkest of Times–a game surprisingly close to the bone considering it’s set over 80 years ago–which offers a “historical resistance strategy game” experience in Berlin during the fall of the Weimar Republic in 1930s Germany. You, a regular Joe or Joy Q. Public, are one of the early members of the resistance, fighting for freedom in a quest to weaken the burgeoning Third Reich and lead your group through the titular darkness brought about by the world’s most notorious fascist regime.

This budget title–in price only, considering the surprising depth of the game–was created at “Indie Games Collective” Saftladen Berlin by local studio Paintbucket Games. It’s clear from its earliest moments that the game is incredibly well-researched by a team with everything at its disposal.

To begin, you’re presented with a limited choice of character. The half-creation suite gives you a randomized combination of names, ages, occupations, political leanings and genders to take with you into the game itself. Once you choose your mix, you’re free to customize their features to a degree. My own choice–Helmut Landauer, a 39-year-old metal worker and anarchist–was soon decked out to look like Phil Oakey from The Human League. 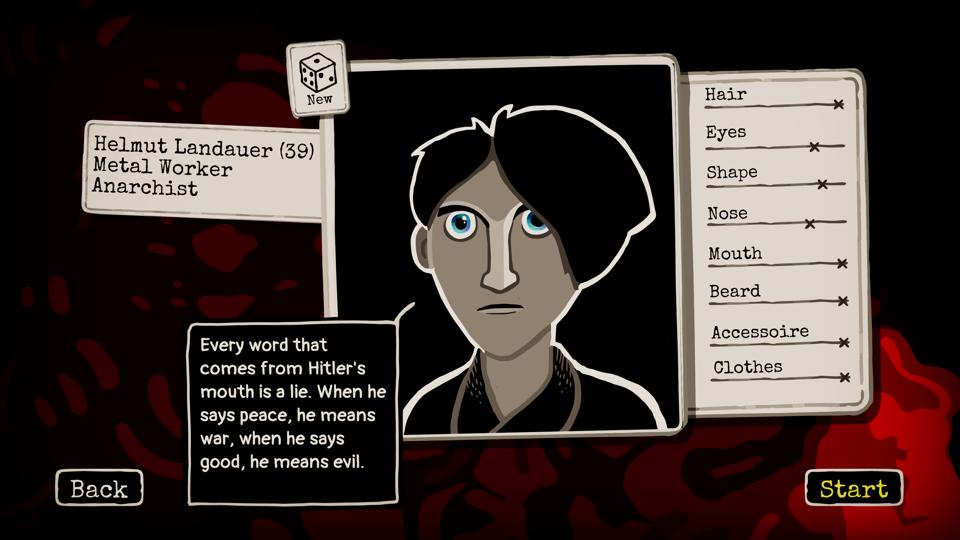 My British synth-pop stylings aside, the precedent the game sets is a good one: serious adventures require a serious approach. Although I’d not go so far as to do it, the game didn’t allow me to actually call my character Phil Oakey, underlining the fact you can’t make a mockery of what, ultimately, turns out to be a fraught and often harrowing experience.

From here, you find yourself in front of a map of Berlin, flanked by a pair of like-minded upstarts with a common view against the rising Nazi regime, planning your week-to-week movements. Each prioritized task has a specific purpose: to raise morale, gather information, recruit people, or generate money and popular support.

Based on your chosen jobs, you need to make sure you have the right people for the right job. Some are better at propaganda, or empathy, secrecy, and these must be finely balanced. Each job has a risk factor: how dangerous each mission may be. Luckily, you often have limited resources to help you: money, intel, and even bikes for speedy getaways. It’s not the most complex algorithm, but it works; it’s like Risk without rolling the dice. 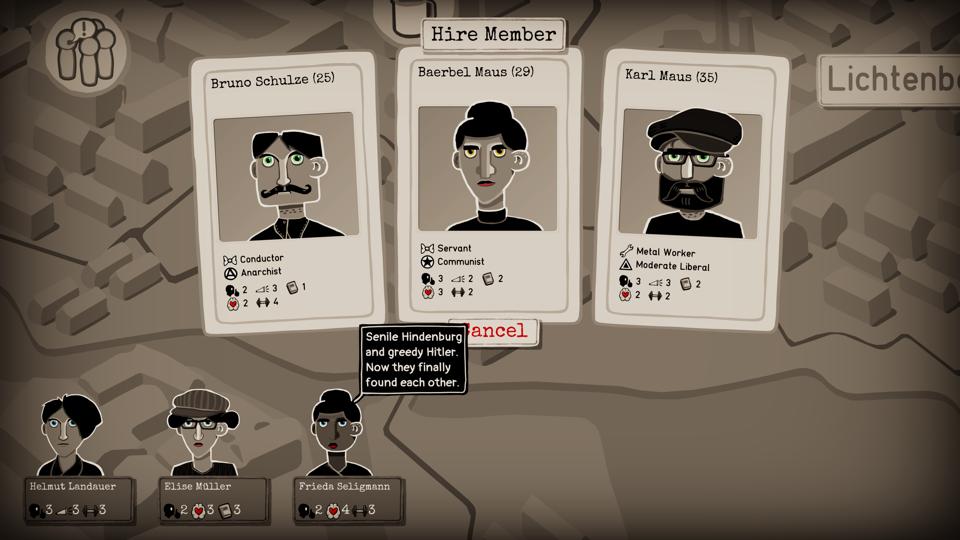 Hiring new people to the cause is a delicate balance of sympathies and abilities.

Due to socio-political factors, you also find yourself juggling allegiances both outside and inside your office. For example, it’s not the best idea to send an anarchist to try and recruit the support of a Catholic priest, but diversifying your membership too much can result in infighting: a conservative may demand the ousting of a Communist. If you disagree with them, said conservative might remind you they’re now unemployed due to helping the cause, and it’s up to you as to how much you pay them to keep them on side–from your limited cash pot.

All the while, newspaper headlines frame each week to prepare you for the coming week, mapped out expertly to reflect historic events from February 1933 onwards. It starts with Paul von Hindenburg’s appointment of Adolf Hitler to the position of chancellor; shortly after, the infamous Reichstag fire results in the Enabling Act of 1933. As I’m sure you’ll understand, this… gets worse. 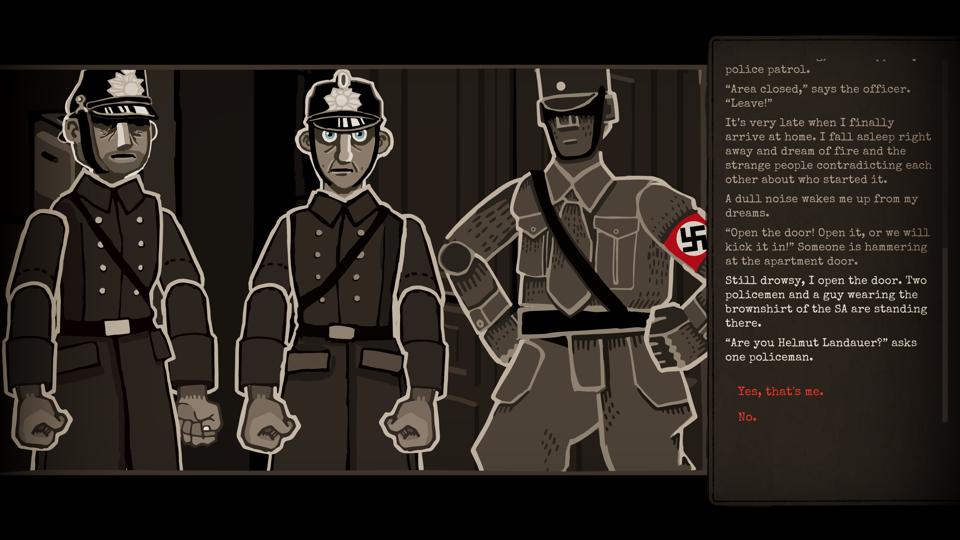 Things are falling apart, and it’s horrific to find that the people you hate may know your name.

Trust your heart or your head?

In light of this open embrace of well-documented history, the game soon teaches you, through a combination of hindsight about Hitler’s rise to power alongside the genuinely clever scripting of TTDOT’s choose-your-own-adventure-style sections, that it’s best not to fight the good fight with a hardnosed, aggressive approach to the new regime. Not all the time, anyway.

As the time-old conversation goes, there are plenty of times you think, had you been at a point in history, you’d’ve acted differently to the general populace–history be damned. Yet Through the Darkest of Times quickly dispels that early, most notably through an early sequence when you see three Sturmabteilung (SA) thugs kicking the hell out of an old Jewish man. You regularly get the opportunity to go in, windmilling your arms, but the game connects on an altogether more human level and reminds you: would you actually do that? 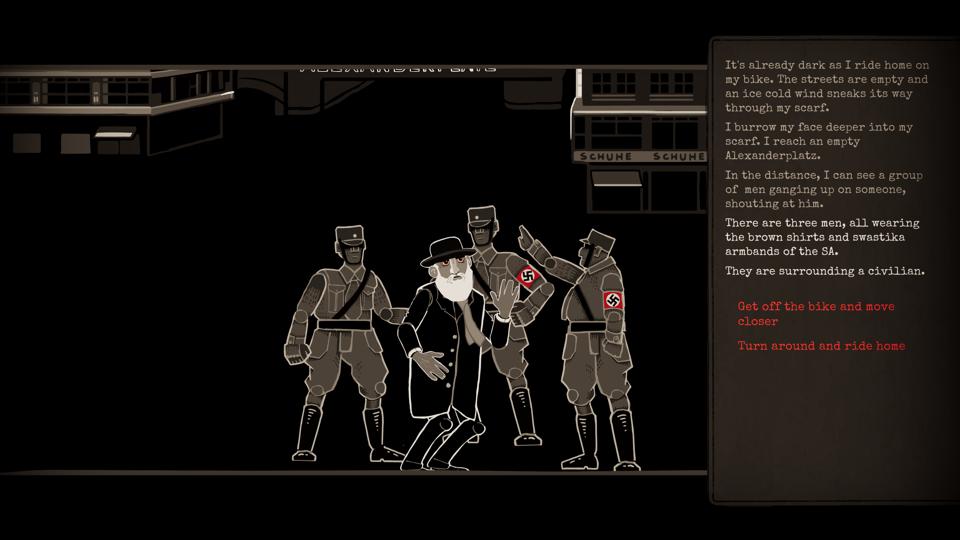 It may be tempting, but direct action isn’t always best.

I couldn’t. Not that it mattered; I still got the hell beaten out of me during a week in jail for no apparent reason. Welcome to the new Germany. But then there are moments of real hope–a little win here, more support there, and a boost in morale at the end of the week. You can attend the famous 200,000-strong protest in the Lustgarden to show defiance in the face of Nazism. But then public demonstrations get banned. The Lustgarden is then paved for Nazi rallies.

You soldier on, knowing that things don’t go your way–however much planning you make. A perfect playthrough will still see you lose people to the SA or general misadventure. But herein lies Through the Darkest of Times’ greatest strength: you know the world’s going to hell, but there’s always a light at the end of the tunnel, even if we really know that’s at least 12 years away, in real terms.

TTDOT plays like an early Civilization game; it often feels like a game of luck and numbers. It can occasionally feel repetitive, something not exactly helped by the identical pieces of post-job text within two or three weeks. But the overarching narrative is brilliant, whether you aren’t clued up on the history of interwar Germany or you’re a real history buff. Its simple gameplay, if anything, allows you to really take in the full effect of one of humanity’s grimmest eras.

Ultimately, for $15, you get a chance to know what you’re grateful for–and, in many cases, what’s still worth fighting for. Through the Darkest of Times isn’t high-paced or jaw-dropping, but it sure knows how to make you feel like you’re walking on air when a big risk against an even bigger threat pays off–or, more likely, catapult your heart into your feet when things go wrong.

Disclaimer: I was provided with a copy of Through the Darkest of Times in exchange for a fair and honest review.

How My Love For Reality TV Tripled My Income

It’s Time To Challenge Our Preconceptions About AI’s...

Firefox Maker Gets In To The Red-Hot VPN...