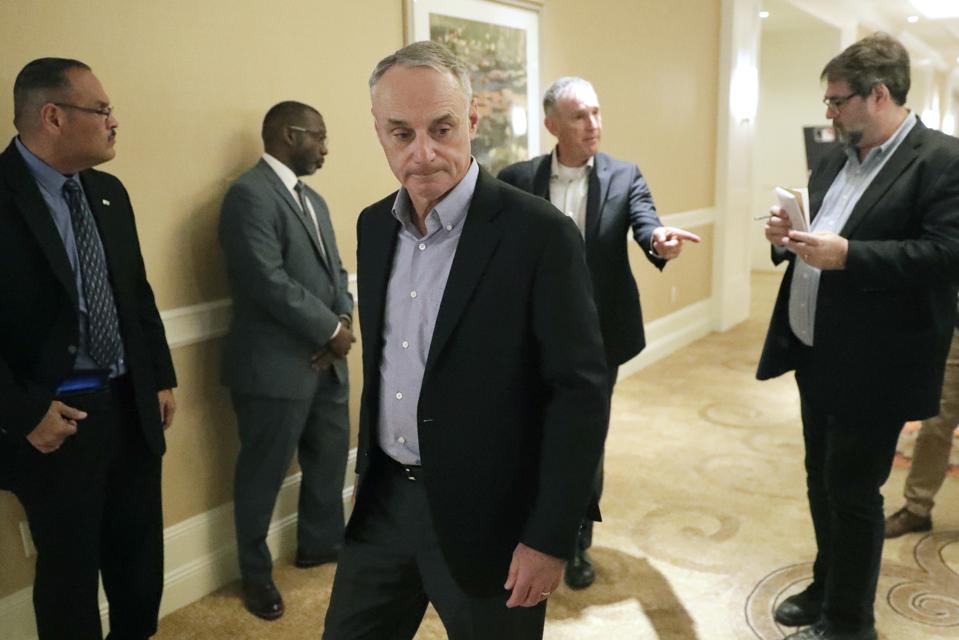 NORTH PORT, Fla. – Rob Manfred says he will not stand for vigilante justice against the Houston Astros.

Major League Baseball’s commissioner spent part of Sunday afternoon meeting with the managers of the 15 teams who hold spring training in Florida. Manfred told those managers that teams and players attempting to get even with the Astros over the sign-stealing scandal that has rocked the game will be punished.

On Tuesday, Manfred will make the same point when he meets with managers of the other 15 teams that train in Arizona.

“I hope that I made it extremely clear to them that retaliation in-game by throwing at a batter intentionally will not be tolerated, whether it’s Houston or anybody else,” Manfred during a news conference Sunday at MLB Spring Training Media Day at the Atlanta Braves’ CoolToday Park.

“It’s dangerous and it is not helpful to the current situation.”

Multiple players from other teams have said they believe retaliatory measures will be taken against the Astros this season Manfred found the Astros guilty of electronically stealing signs the signs of opposing catchers during the 2017 and 2018 seasons and the fallout has been severe.

Houston general manager Jeff Luhnow and manager AJ Hinch were both suspended by Manfred for one season on Jan. 13 then fired an hour later by Astros owner Jim Crane.

Cora was the Astros’ bench coach in 2017 while Beltran was in his final season as a player. Both were found to have played integral parts in the sign-stealing scheme.

However, no players received punishment as Manfred granted them immunity in return for cooperating with MLB’s investigative team. The lack of suspensions has angered players from other teams along with fans and led to suggestions opposing pitchers might intentionally throw at Astros’ hitters as a means of getting even.

Manfred defended the immunity decision despite being roundly criticized for it.

“If I was in a world where I could have found the facts without granting immunity, I would have done that,” Manfred said. “They had an obligation to play by the rules and they didn’t. I understand when they say the players should have been punished.”

The Astros have created further anger by their ham-handed way of apologizing. Many people both inside and outside the sport feel Houston has not showed proper contrition and seems more upset about being caught and punished than remorseful for breaking the rules.

Manfred admitted that situation is “not healthy” for the sport. However, he also said he has no plans of potentially satisfying the critics by forcing the Astros to vacate their 2017 World Series title, the only one in the franchise’s 58-year history.

“First of all, it had never happened in baseball,” Manfred said. “I am a precedent guy. The 2017 World Series will always be looked at as different, whether not you put an asterisk or ask for the trophy back. Once you go down that road as for changing the result on the field, I just don’t know where you stop.”

One way in which Manfred plans to reduce the chances of another sign-stealing scandal from happening again is by putting restrictions on the amount of in-game video available to players and other team personnel.

“I think it’s really important for us to send a message to our fans that not only did we investigate and punish, but we altered our policies in a way that will help make sure it doesn’t happen again,” he said.

If They Are So Alarmed By Climate Change, Why Are They So Opposed To Solving It?

WWE Could Finally Do The Undertaker Vs. Sting...

Budget Before The Holidays: 7 Books That Will...

Should We Be Worried By The Delay Of...

Darth Maul In ‘The Mandalorian’ Season 2 May...

You’ve Heard of Robots; What are Cobots