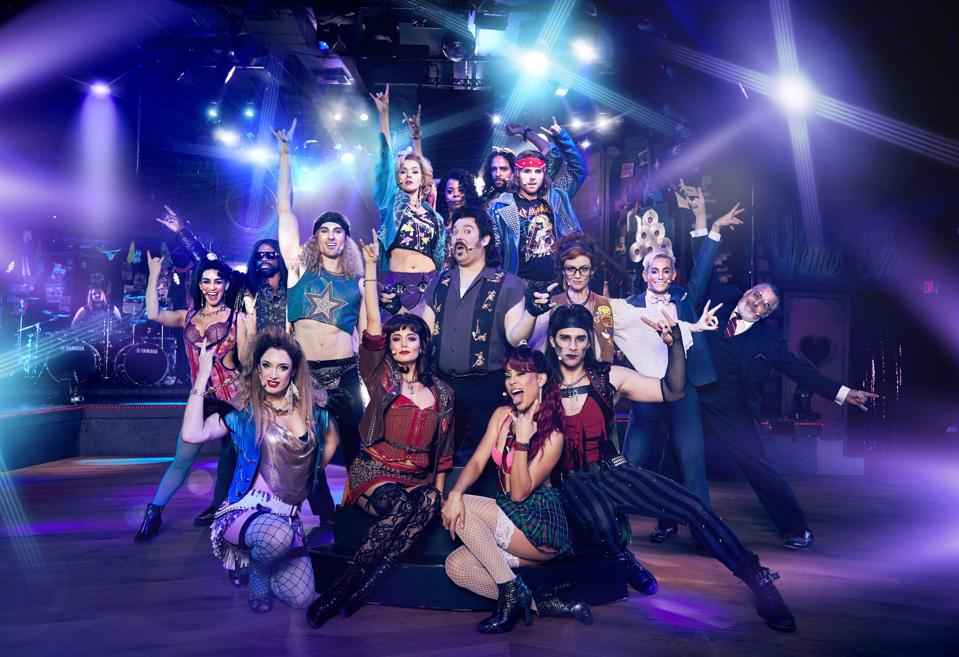 ‘Rock of Ages Hollywood’ at The Bourbon Room opened its doors in a specially built performance … [+] venue, including a 250-seat theater where the dinner show takes place, on the iconic Hollywood Boulevard in Los Angeles, California.

“People said, ‘Wait a minute. You’re taking a Broadway show, and a restaurant, two of the riskiest things to invest in, and you’re combining them?’ It raised eyebrows,” confessed Rock of Ages founder and producer, Matt Weaver.

Following previews, his latest venture, Rock of Ages Hollywood, opened its doors in a specially built performance venue, including a 250-seat theater, on the iconic Hollywood Boulevard in Los Angeles, California. It’s named after the venue at the center of the show, The Bourbon Room.

With six years on Broadway and over 2,350 performances, five Tony Nominations, numerous productions of the show worldwide, the elevated immersive dinner theater experience is in it for the long haul.

“We do have a ten-year lease, and I think there are reasons to be optimistic that we can have a long run,” Weaver explained confidently. “Given we did five and a half years in New York and four years in Las Vegas, we’re hopeful. Sometimes we sit around and think, ‘Well, maybe this could be the new Rocky Horror Show but where we’re a permanent thing in Hollywood?’”

The original Rock of Ages was staged only a few blocks away from the new location. However, the stakes are higher, and investors want a return on their investment. That’s something Weaver is very aware of and has previously delivered.

“If you invested in Rock of Ages on Broadway, you made your money back and a healthy profit. We sold more liquor than any show in Broadway history, so now we have the liquor revenue to consider too. It’s the liquor sales that allow me to pay for the high quality of the show,” he explained.

“This is not like an 80s show done in a bar in Los Angeles. We’ve done it almost to a Broadway-level from the set to the props to the costumes. That was my significant risk, but I went for it because quality has to win out. I would not be able to do that if we didn’t have the liquor revenue. I think investors looked at it and thought, ‘Most Broadway shows have a hard time, but here is a show that almost doubled its money on Broadway and now they have the liquor revenue, and we’re on Hollywood and Vine.’ It didn’t seem like such a crazy investment.”

Weaver added: “There is a lot of pressure in this business. If I said there wasn’t, I’d be lying. I wake up every day, and I’ve got to get asses in the seats, I’ve got to sell drinks, I’ve got to sell food, I’ve to think about what people think of the show, there’s just so much to think about. Just because we’ve been doing it for 15 years and 99% of people absolutely love it doesn’t change any of that.” 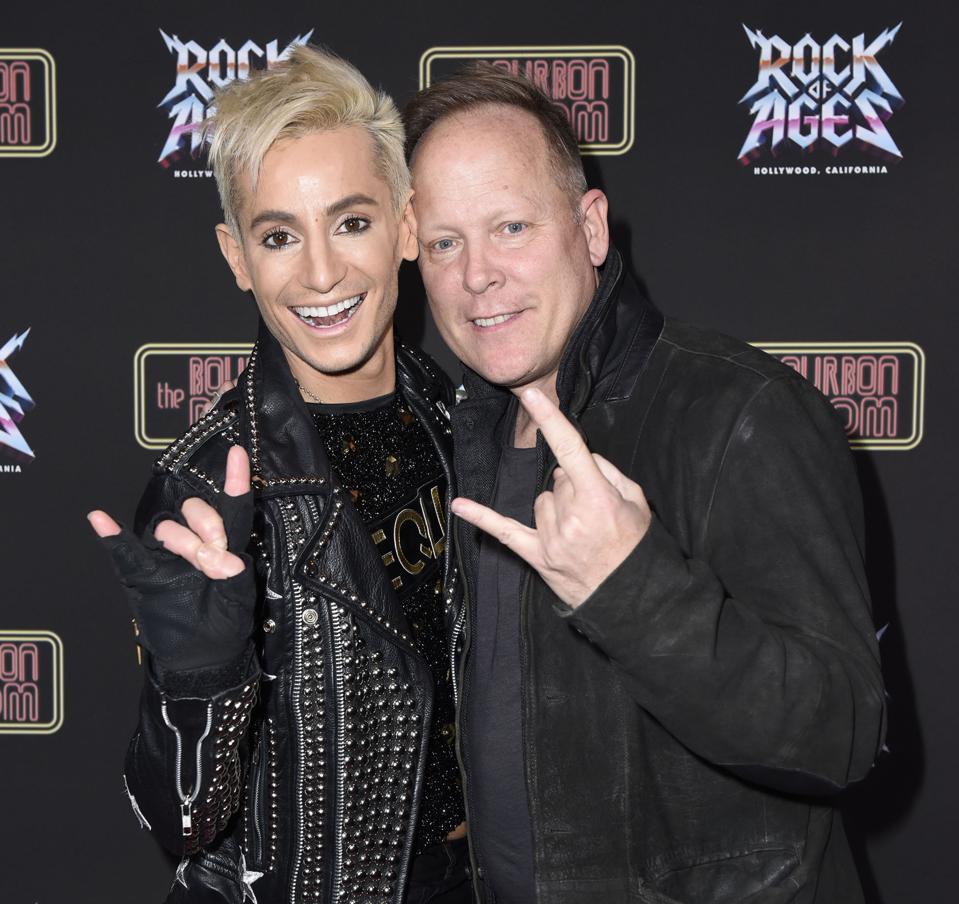 (Left to right) Frankie Grande and producer Matt Weaver attend a preview of ‘Rock of Ages Hollywood’ … [+] at the Bourbon Room in Hollywood, California.

It’s the show’s magnetism that the producer credits for the continued popularity of Rock of Ages in whatever setting, and how many times, people experience it. Even as a fan of the original show and the movie adaptation, which sadly only grossed $59.4 million against its $75 million budget, I was skeptical about Rock of Ages Hollywood. My biggest fear was that it might be little more than a touristy cash grab, or a poor relation of previous versions, but having experienced it, I couldn’t be happier to be wrong. I have zero doubt that I’ll be going back again.

“That’s one of the barometers we go by, the repeat business. We have the outliers like Abe Calimag; he’s a superfan that the New York Post has written stories about. He came again just the other night. It was something like his 745th show,” Weaver explained. “We recently had a lady who was there for her 60th time watching the show, and another was there for her 90th time. We get a ton of repeat business around that. Even our investors are coming back five, six, seven times.”

“It’s got this thing about it that makes people, from fans to the show’s producers, want to see the show over and over again. Honestly, that was never a part of the plan. On paper, 15 years ago, a musical featuring the work of Whitesnake and Poison where they’re handing out shots did not sound like a good idea put a lot of artistry and craftsmanship into it, and while it’s fun and wild, I think it’s a real piece of art.”

He added: “From a very simple level, the show makes you feel terrific. It’s hard not to smile. It’s hard not to feel nostalgic. So many of those songs take people back to their weddings, their first kiss, their first date, their Bar Mitzvah, or their Sweet 16. We’re taking you down memory lane. But on top of that, you know, this isn’t a gimmick. It’s not like we just threw these songs together, and we hand out jello shots.”

“Plus, it’s really funny. Chris D’Areinzo, who wrote the book, wrote a really smart book that’s filled with laughter, humor, and even a little bit of emotion. I don’t think Chris gets enough credit. You don’t run on Broadway for five and a half years with a gimmick. With a gimmick, we would’ve run maybe Broadway for only six months.”

With a ten year lease in Hollywood and previous incarnations of the show having proved popular and highly lucrative, it would seem the IP doesn’t need new life breathing into it. To be specific, it is breathing hot and heavy on its own, and Rock of Ages Hollywood is just the beginning.

“100%. We have the rights to do it in other cities.” Weaver enthused. “So in 2020, we’re going to open up our second Bourbon Room in either Las Vegas or Nashville. We’re looking at other cities right now as well, including Chicago and Orlando. The business model here is to create a franchise. Is it going to be Planet Hollywood? Probably not. Could it be Saddle Ranch where there are 10 or 15 of them? Absolutely.”

“At some point, we’d like to expand to Asia, where Rock of Ages did particularly well, so we’re looking at Korea, Japan, the Philippines. In one Google search, you can see how popular 80s music and American pop music is there, and the audiences in, and from, Asia love immersive experiences.” 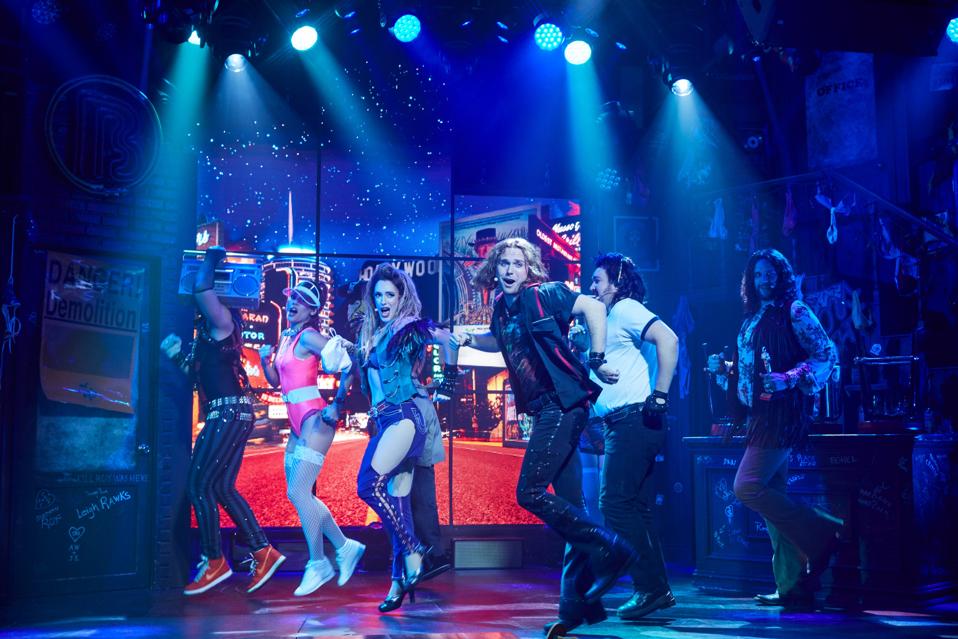 The cast of ‘Rock of Ages Hollywood’ put on a full-length performance of the show that audiences … [+] around the world have experience but now they get to eat and drink while they soak it all in.

The Rock of Ages Hollywood’s exemplary cast, who left jaws dropped, includes the delicious Frankie Grande, who the audience ate up like a tasty snack. He reprises the role of Franz, which he played in the musical on Broadway, putting a cherry on top of this heady and intoxicating rocktail. Is the celebrity casting something audiences can expect as part of the franchise rollout?

“Having a celebrity is not part of our business model because the overriding thing is to ensure quality rather than a gimmick. We’re still a lower budget show. We’re not Wicked. We’re not Jersey Boys,” Weaver stated. “On Broadway, and in LA, I didn’t, nor do I have, a ton of money to pay somebody a huge amount, but we’ve been fortunate to be able to make a deal with Frankie, and he’s doing an amazing job. If I go to Nashville, am I going to get Billy Ray Cyrus to play Dennis, the club owner? I don’t know. It’s always about the right person at the right time and a deal where everybody wins.”

But how does Weaver intend to convert skeptics or locals who might be sniffy about Rock of Ages Hollywood and dismiss it as touristy or cheap. His answer is simple and confident.

“I would say come, and if you don’t like it, I will give you your money back right after the show. 100%. I’m that confident in it. If you absolutely don’t like Rock of Ages, I’ll give you your money back,” he pledged. “I can see some people thinking that on paper it could sound cheap, right? Every day we’re getting somebody who comes to the show because they got dragged there by a friend or came with a lot of hesitancy and I think we’ve probably got a 99% rate of turning those people around and I love that, I’m proud of that.”

And he, like everyone involved in Rock of Ages Hollywood, should be.

Rock of Ages Hollywood (6 shows a week running Wednesday through Sunday) and The Bourbon Room are now open for business.

Apple’s Lack Of Innovation Is Hurting The MacBook Pro

How Roxanne Assoulin Is Making The Case For...

Why You’ll Be Thankful And Leave A Tip...