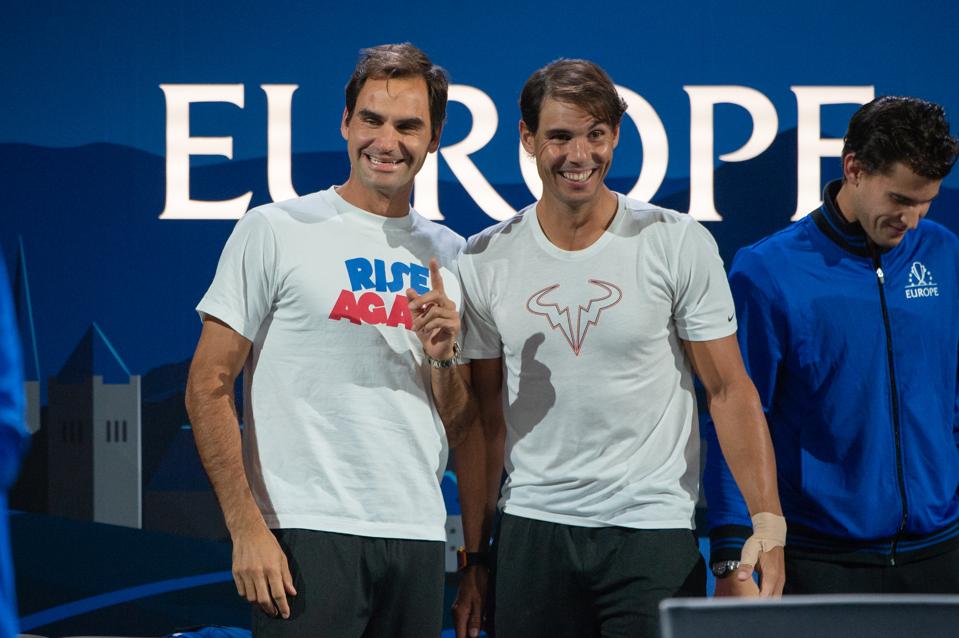 GENEVA, SWITZERLAND – SEPTEMBER 20: Roger Federer and Rafael Nadal of Team Europe looks on during … [+] Day 1 of the Laver Cup 2019 at Palexpo on September 20, 2019 in Geneva, Switzerland. The Laver Cup will see six players from the rest of the World competing against their counterparts from Europe. Team World is captained by John McEnroe and Team Europe is captained by Bjorn Borg. The tournament runs from September 20-22. (Photo by RvS.Media/Robert Hradil/Getty Images)

Nadal made the announcement during a charity event Wednesday at Rod Laver Arena in Melbourne ahead of the start of the Australian Open on Jan. 20. He and Federer have combined to win 39 Grand Slam singles titles, with Federer holding a narrow 20-19 lead on his top rival and close friend.

“Hopefully that’s keep inspiring the people to support this terrible disaster that we’re going through and helps to recover all the things that we need,” Nadal said on ESPN2.

Novak Djokovic and Nadal previously announced that the ATP would donate $725,000 Australian — nearly $500,000 U.S. — to the World Wildlife Fund. The bushfires in New South Wales and Victoria have burnt through more than 25.5 million acres of land, killed 25 people and left thousands homeless. An estimated one billion animals have perished.

“The scale of these fires is unprecedented,” Dieter Hochuli, an environmental sciences professor at the University of Sydney, said, per CBSlocal. “There are substantial concerns about the capacity of these (ecosystems) to rebound from the fires.”

The ATP Cup then announced that $100 Australian ($69 U.S.) for every ace served in the competition would be donated to the Australian Red Cross bushfire relief efforts.

American basketball star LaMelo Ball, who plays for Illawarra Hawks of the Australian NBL, pledged to donate one month of his salary to help victims of the devastating fires.

“It’s sad to see what is happening on the south coast of Australia,” the American said in a statement. “People have lost their homes and everything they own. My parents taught me to help out wherever I can, so this is my way of helping out.”

The Brightest Supernovae Of All Have A Suspiciously...

Napoli Accused Of “Abuse And Intimidation” Of Their...

Of AJ Hinch’s Suspension, And His Infamous Last...