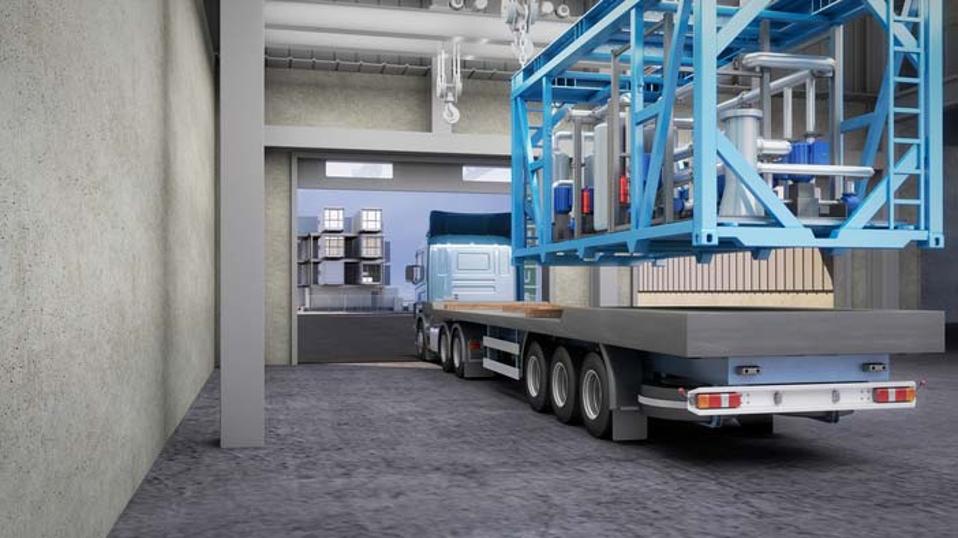 Rolls-Royce’s Small Modular Reactor (SMR) design would allow for prefabricated modules to be shipped … [+] by truck.

Global manufacturer Rolls-Royce is the latest entrant in the tech race to provide small-scale nuclear power. Last month, the company announced plans to build 10-15 small modular reactors (SMRs) in the United Kingdom by 2029, with each unit compact enough to sit on the back of a tractor-trailer. The plants would be constructed on so-called “brownfield sites” in Cambria and Whales where aging or decommissioned nuclear power stations are still in place. Rolls Royce has thus far received £18 million ($23.1 m) from the British government, and is requesting £200 million ($258 m) more.

This company push comes with the backdrop of the global energy sector facing increasing pressure to produce more green power more quickly more affordably – and in more places. All while reducing their carbon footprint.

As I’ve written about before, SMRs are the next evolutionary step of nuclear power: compact, affordable, quick to construct, emission-less, and even transportable. China has great aspirations to lead in this field, as it does or attempts to do in solar panels, wind energy, 5G communications, MAGLEV trains, artificial intelligence, and more. The UK wants to give China a run for its money.

If done right, SMRs can integrate with renewable power sources and can generate highly resilient baseload power at cost-competitive prices. Their modular design facilitates mass production and enables units to be scaled up and down according to need. Generally, SMRs produce power in the 50-megawatt to 400- megawatt range, whereas a conventional nuclear power station is in the neighborhood of 1,000 megawatts.

The U.S. military would like portable reactors to provide energy for remote military bases or even battlefield weapons: think of all the laser weapons one small nuclear reactor could feed.

According to Paul Stein, Chief Technology officer of Rolls Royce, their units would use mass manufacturing techniques to drive down costs and accelerate build times: “The trick is to have prefabricated parts where we use advanced digital welding methods and robotic assembly and then parts are shipped to site and bolted together.”

Size is a critical factor too. While the reactor itself could theoretically fit on a tractor trailer, the footprint of the power station would be about 1.5 acres, surrounded by a 10 acre operations site. That’s a one-sixteenth the size of the UK’s Hinkley Point Reactor, a $20 billion nuclear project set to complete by the mid-2020s. The dual-reactor station would boast an impressive 3,200 megawatt capacity once completed, compared to a the 440-megawatt SMRs proposed by Rolls Royce.

The challenge conventional nuclear facilities face are their sometimes multi-decade construction times and high capital expenditures (CAPEX) – reaching an average of $11 billion per unit in 2018. Furthermore, large land area requirements and safety concerns preclude nuclear power stations from being located too close to urban centers – meaning that costly power lines must also be constructed to connect supply with demand.

By contrast, SMR’s have a small footprint (the size of a barge or small house), enhanced safety, rapid build-times, and a unit cost between $800 million to $3 billion – making them ideal for remote areas suffering from low energy access. Global demand for small and medium sized modular reactors has subsequently been increasing. 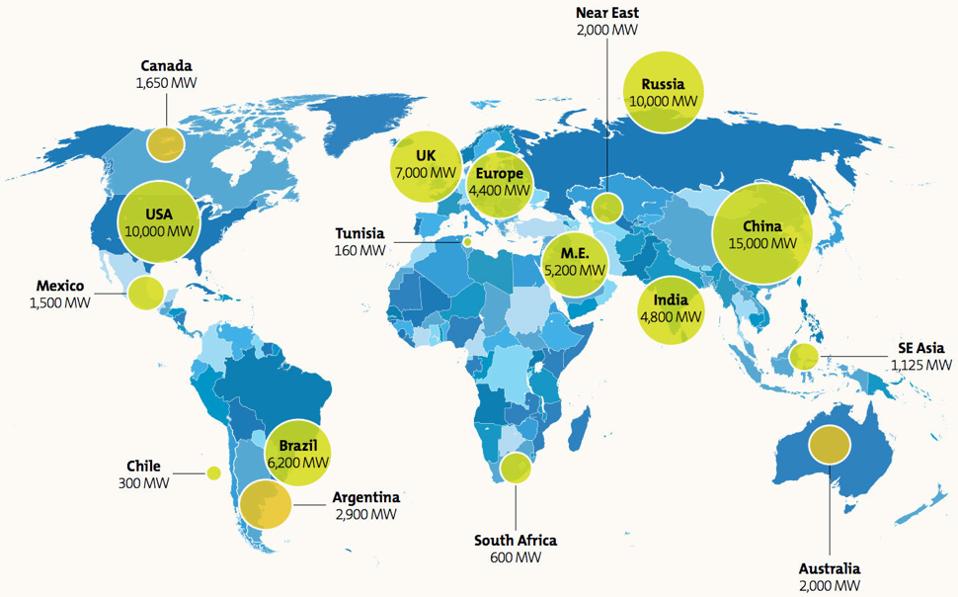 The potential global SMR market (in megawatts), according to an analysis by the British consortium … [+] led by Rolls-Royce.

Costs are still a limiting factor, however. Rolls Royce is aiming for an electricity cost of £60/MWh ($77/MWh), which puts its reactors at roughly twice as expensive as the average cost of nuclear energy in the United States in 2017 – $33.50/MWh.

But like with all new technologies, where costs start high, SMRs do not dissuade other players from investing: China announced plans in 2016 to build its own state-funded floating SMR design. In Russia, the government launched the Akademik Lomonsov, a floating 70-megawatt reactor in the Arctic. And three Canadian provinces — Ontario, New Brunswick, and Saskatchewan – have signed a memorandum to look into the development of SMR’s.

Many believe that nuclear energy is a key pillar of achieving global carbon neutrality in the energy sector by 2050. With traditional nuclear plants now aging and decommissioning, it stands to reason that SMRs can fill the nuclear gap. According to International Atomic Energy Agency (IAEA) Director General, Rafael Mariano Grossi, “Nuclear must have a place at the table: it is illogical and unscientific to be worried about climate change [at the same time as] discarding a clean, low-carbon emitting energy [such as] nuclear,” he said.

SMR’s could be a small, modular part of the complex and economically efficient climate solution we all are striving for.

With assistance from James Grant and John Vatian

This Week In Credit Card News: Your Card’s...

Graduate Students, Not Undergraduates, Will Gain Most From...

Transcript of How Leaders Can Create Inclusive Cultures