Russia, China And The U.S. Are Forever Changing The Global Gas Market 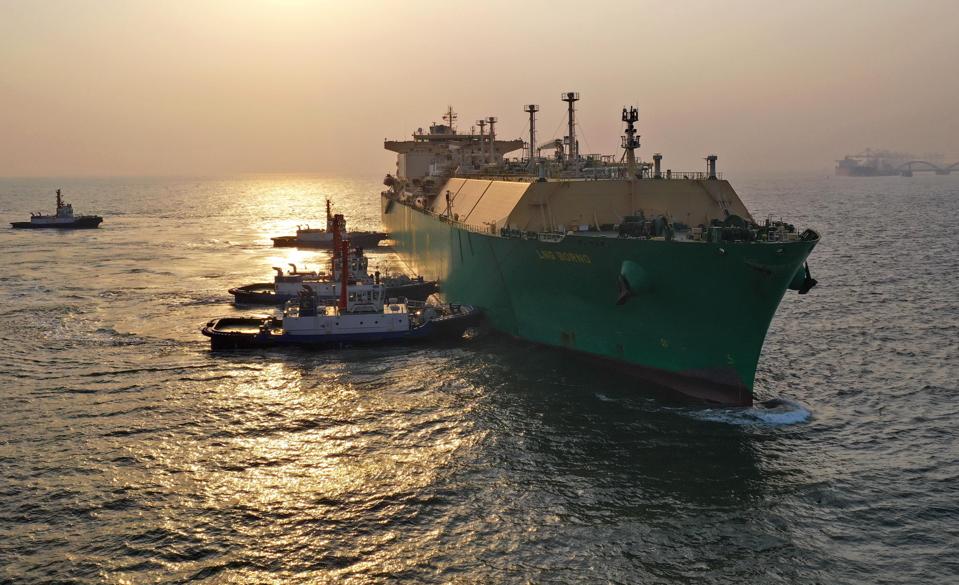 An LNG tanker heads to the Caofeidian port in Tangshan in China’s Hebei Province. China is the sole … [+] story for growing LNG demand. (Photo by Yang Shiyao/Xinhua via Getty)

It is a buyer’s market for anything related to fossil fuels. Even traditionally the most expensive of them, liquefied natural gas (LNG), is in sharp decline.

Other than the recent, and hopefully temporary, viral flu outbreak from China, what is driving LNG prices to the ground? After all, the Phase One China deal is done, so that’s not a headwind anymore, and it means more China demand for U.S. LNG.

The Iran-inspired launch of “World War III” is but a memory.

As always, it’s a story of supply and demand. Qatar and Australia are battling for the world leadership in LNG exports. Massive supply of gas out of Russia and the U.S. is doing its bit. These competing, energy-rich juggernauts are one of the main reasons prices have fallen.

China has a deal to buy LNG from its own investment in the massive Yamal LNG project in Russia, and is supposed to buy more from the U.S. too. There is plenty of it to go around, and Chinese demand is set to quadruple over the next 15 years as it is fighting pollution caused by coal-fired power plants. U.S. natural gas supply is so large, that storage containers are basically overflowing.

Oversupply is bad for energy exporters as margins compress, and not good for their buyers who are stuck with contracts signed at a time when prices were three times higher. Many energy companies are in a tight spot, now that new contracts are being  signed at prices much closer to the cost of production. The energy bear market never sleeps. 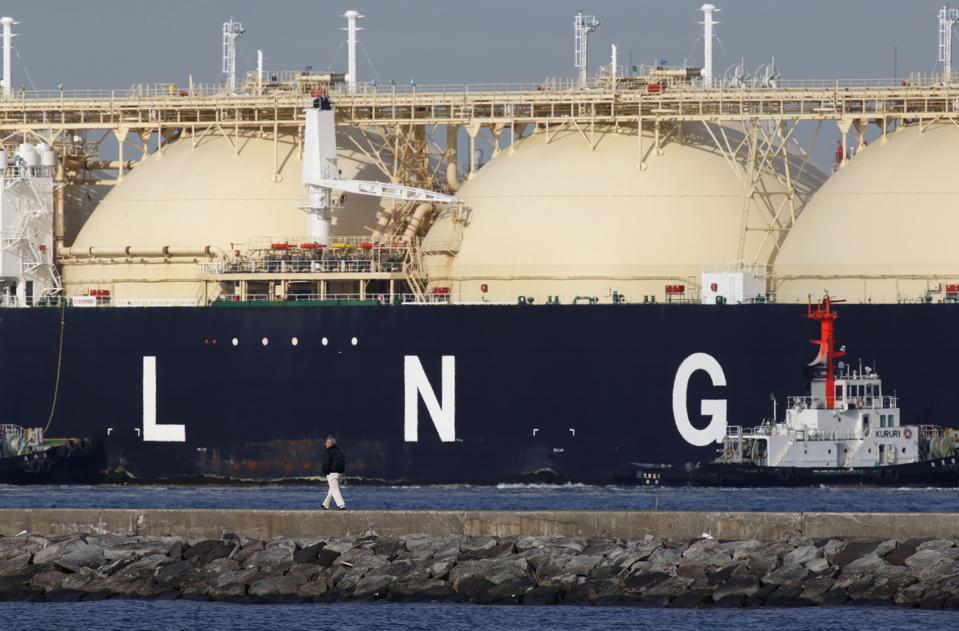 LNG has become a cost-effective way to get the cleanest burning fossil fuel – natural gas – to an end-user without having to lay miles and miles of pipelines. In some countries, LNG vessels called Floating Storage Regasification Units (FSRU) are connected directly to a natural gas fired power plant set up onshore.  It’s become a whole new way to get fuel to utility stations built nearshore.

Despite China’s demand for LNG expected to rise exponentially as it does away with coal as part of its energy matrix, LNG prices aren’t what they used to be.  LNG’s fortunes have completely collapsed from highs of $17 per million British thermal units at their peak in 2012 and again in the summer of 2015 in Asian markets, and are now down to around $5 and change.

Blame Russia and the U.S. They’re swimming in this stuff.

When China completely abandoned the U.S. LNG market starting in May last year thanks to the trade war, LNG export prices to Japan, one of the two largest markets for American liquefied gas, went up about a penny. It has been flat since.

In one of the more well-known cases of buyer remorse out there, Germany’s Siemens and Azerbaijan’s state owned energy exporter, SOCAR Trading, were awarded a deal to supply electricity and gas to Malta in a competitive bidding process. SOCAR Trading signed a deal in 2015 to supply LNG for a period of 10 years to Enemalta, the island’s main utility starting from 2017, with the price being supposedly fixed at 9.4 euros per one million British thermal units for the initial five years.

While it’s higher than where prices are today, back in 2015, $10 was a discount and Malta got a fair price.

LNG prices in the U.S., started that year off at more than $17 and ended the year over $15. Prices began to collapse in 2016 and have not recovered much, maybe $0.50 up or down over the last two years.

That Malta deal, which involves Shell Oil LNG vessels, has come with numerous issues of foreign intrigue and allegations of abnormal profits – which are probably earned not by LNG suppliers, but by some investment firms which were on the right side of Maltese price hedge.

Enemalta was basically forced into LNG by the European Union in order to comply with EU environmental standards and address risky delivery from underwater power cables connected to Italy. LNG was not a cheap solution at the time, but it made sense as a way to bring in stable, clean fuel to generate electricity. Factoring in more than 500,000 tons of CO2 equivalent emission that Maltese powerplants were generating annually prior to 2017 LNG era at a current cost of 24.75 euros per ton makes the case for the less-polluting LNG even stronger.

Bringing in LNG was all based on lowering carbon emissions and cutting electricity costs, which the Maltese government said it accomplished.

Price falls have led to numerous write-downs and failed LNG deals elsewhere around the world.

Energy commodities hedging firm Trafigura in Singapore started off 2019 losing upwards of $250 million because of weak LNG prices, but recovered at the end of the year when LNG prices stabilized and oil price volatility worked in their favor.

Some in the industry worry that low prices, and negative headlines about LNG political fights, could upend new deals to upgrade nearshore power plants to the clean energy commodity, known as LNG-to-Power.

Jamaica has a similar LNG-to-Power facility in a joint venture with U.S. based New Fortress Energy. An FSRU called the Golar Freeze is linked to a regasification plant that sends the gas to two power stations that generate around 300 megawatts of electricity combined. Nearly half of the country’s electric power is derived from U.S. LNG. It used to be mostly oil.

Still, lower prices are not winning over newcomers, especially in developing countries that lack the infrastructure for traditional power generation.

For example, Kenya said it wanted an offshore LNG unit built back in 2011. They issued a tender for a large 700 megawatt project five years ago, then cancelled it. It’s gone nowhere since.

South Africa’s PetroSA has been studying LNG since 2012. Last year, the state-owned freight logistics firm Transnet says it wants to launch a tender next year for South Africa’s first LNG import terminal, in hopes to have it ready by 2024.

LNG-to-power projects, despite beating most other fossil fuel-based generation, are criticized due to their novelty and complexity. Government bureaucracies and politicians are playing it safe, afraid of going against the oil and coal lobbies. Legislative and regulatory frameworks to use LNG are still missing. As a result, China remains in the driver’s seat on the demand side. Just as important, China has the capacity to legislate long term without the risk of a political opposition using energy deals as a weapon against an incumbent. 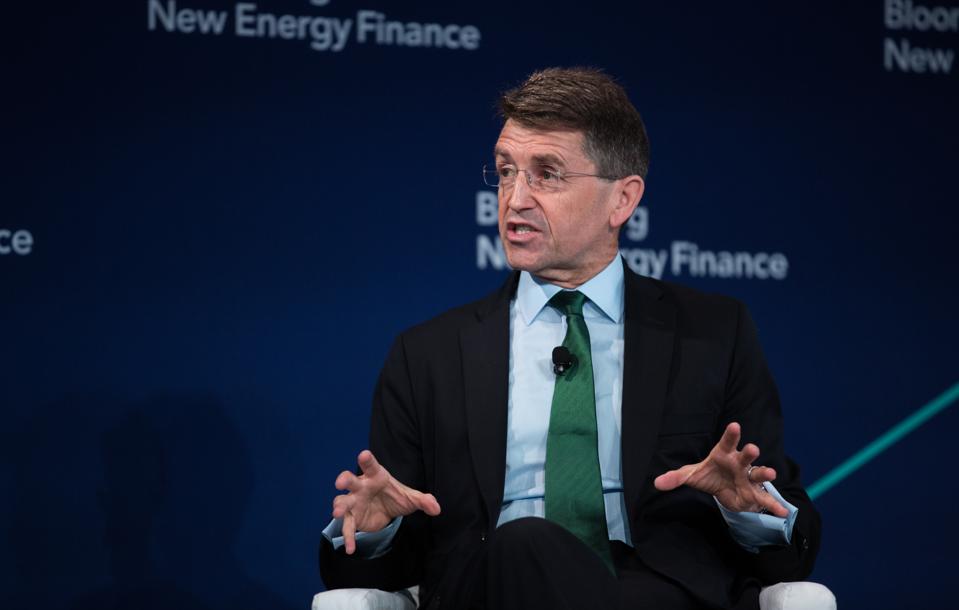 The good news is that energy prices are going to be lower for longer. The bad news is that consumers in underserved markets and energy companies may suffer. Investors hate this sector. The SPDR Energy Select (XLE) exchange traded fund is down 11.5% in 12 months, 23.9% over the last two years, and 30.9% over the last five.

Markets are total bears for U.S. energy stocks, while China and Russian energy stocks like Novatek, Gazprom and CNOOC, all major LNG players, are doing better.

British Petroleum’s CFO Brian Gilvary said on a recent conference call on BP earnings that LNG looks bearish for the next two years. BP’s stock price has underperformed the FSTE 100 over the last five years. 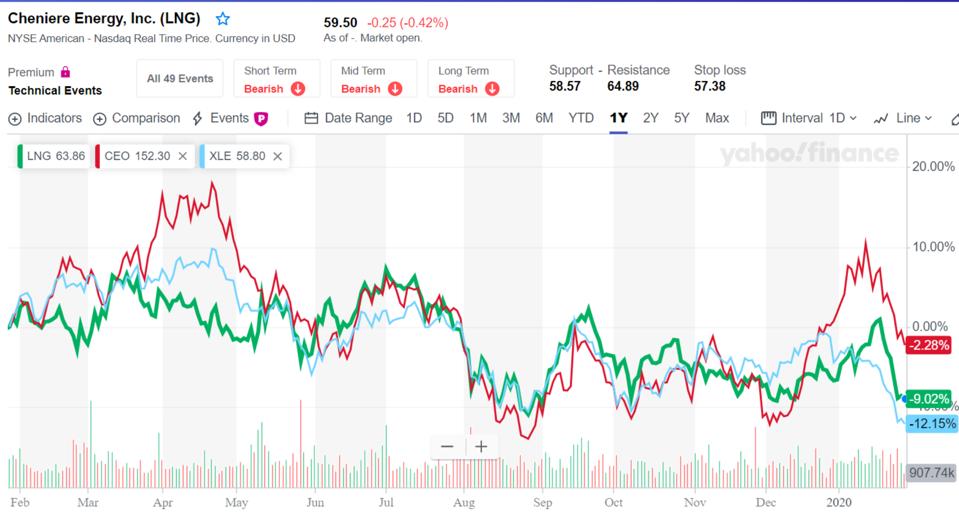 Cheniere, one of the biggest LNG exporters of the U.S. is down over 9% in the last 12 months, … [+] underperforming China’s CNOOC. Over the last five years, investments in Cheniere stocks have lost 17.5%.

U.S. LNG has the lowest cost of production in the world, better than Russia and better than Australia which is getting in on the game in order to serve the Chinese. But beyond China, Gilvary thinks it will be hard for companies to find new markets.

“You’re probably looking at the back end of 2021 before you start seeing this massive supply overhang clear out and then we will have LNG projects coming onstream in Australia…which is simply going to exacerbate the (over supply) situation,” he said.

LNG has changed how gas is traded around the world. It has made it a global, rather than a regional, commodity.

Until more LNG-receiving terminals start getting built as an alternative to long pipelines, then it’s China or bust. LNG exporters need more demand from new markets.

Meanwhile, buyers who locked-in at higher rates will continue feeling political pressure points, like in Malta, Pakistan and others. Also expected are big players like Toshiba to cut their losses in what has become the longest running energy bear market since the Great Recession.

Don’t Let Your Innovation Efforts Fail Before They Even Start

How Any Fifty-Year-Old Can Retire A Millionaire

The Smart Office Revolution Is Here, Because Smart...

15 Big Legal Mistakes Made By Startups

Finding Ideas for a Video Series or Podcast...

Andy Murray Out Of Australian Open Because Of...