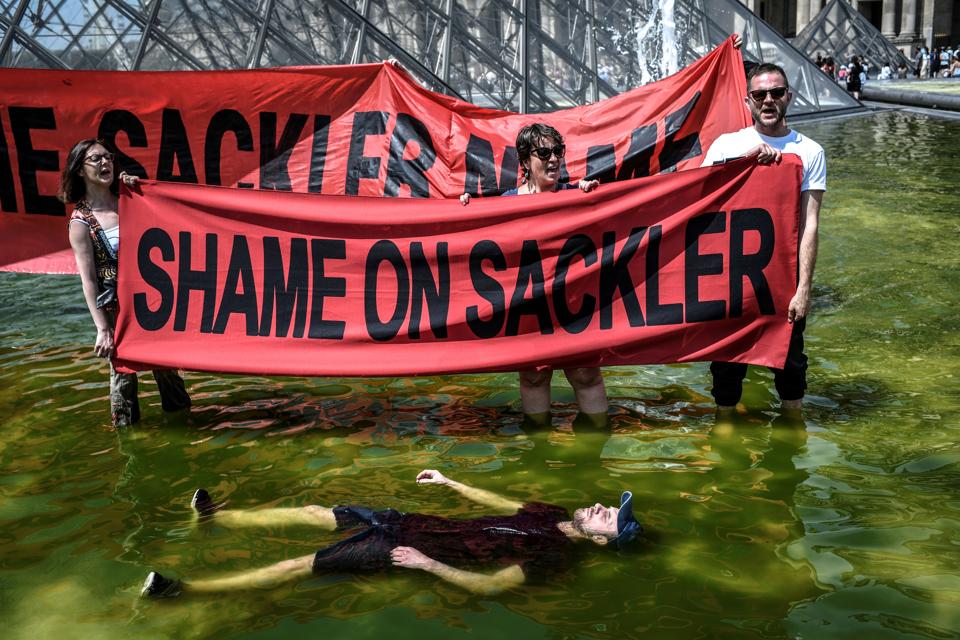 TOPSHOT – Activists of P.A.I.N. (Prescription Addiction Intervention Now) association – created to … [+] respond to the opioid crisis – and of French NGO Aides hold banners reading “Shame on Sackler” and “Take down the Sackler name” (back) in front of the Pyramid of the Louvre museum (Pyramide du Louvre), on July 1, 2019 in Paris, during a protest to condemn the museum’s ties with the Sackler family, billionaire donors accused of pushing to sell a highly addictive painkiller blamed for tens of thousands of deaths. – The Sacklers have been high-profile philanthropists to cultural institutions such as the Tate in London and the Guggenheim in New York, but museums and galleries have recently been rebuffing their donations because of the opioid crisis fallout. The most recent museum to cut ties with the Sackler family is New York’s Metropolitan Museum, which announced earlier this month that it will cease accepting gifts from the family. (Photo by STEPHANE DE SAKUTIN / AFP) (Photo credit should read STEPHANE DE SAKUTIN/AFP via Getty Images)

Recently released court documents highlight an audit commissioned by Purdue that found the Sackler family withdrew $10.7 billion from Purdue Pharma between the 2008 to 2017 as scrutiny over the opioid epidemic and the company’s signature drug OxyContin grew. The 350-page forensic accounting report was prepared by AlixPartners, which is currently guiding Purdue Pharma through Chapter 11 restructuring, which they filed Monday evening in White Plains, New York. This amount far surpasses the the $1.3 billion taken between 1995 and 2007. While some of the funds went to paying taxes, many of the funds went to personal trusts, holding companies, and offshore accounts (including notable tax havens, such as the British Virgin Islands and Luxembourg). The revelation is adding fuel to the legal fire between the Sackler and a coalition of states who want answers as to where exactly the Sackler’s profits went.

The audit now raised new questions of how much the Sacklers should pay to resolve the more than 2,800 lawsuits seeking to hold Purdue Pharma accountable for the epidemic. Previously, the Sacklers has offered to pay a $3 billion and relinquish control over Purdue Pharma, but, as the new audit shows, that leaves over $9 billion in profits for the family unaccounted for and a coalition of 24 states, led by New York and Massachusetts, are pushing back and are refusing to sign the agreement arguing that the Sacklers should pay more. The coalition wants to know how much the Sacklers are really worth and where did the money go? 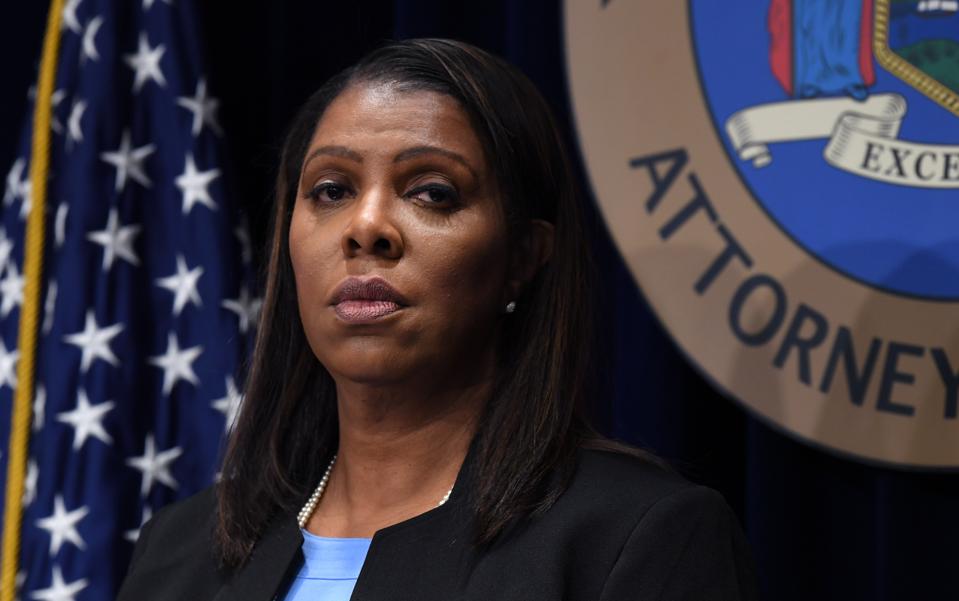 New York State Attorney General Letitia James holds a press conference at the Office of the Attorney … [+] General in New York March 28, 2019. – James announced the filing of the nations most extensive lawsuit against the manufacturers, Sackler Family, and distributors of opioids for their role in the opioid epidemic . (Photo by TIMOTHY A. CLARY / AFP) (Photo credit should read TIMOTHY A. CLARY/AFP via Getty Images)

In a statement, New York attorney general, Letitia James, said, “The fact that the Sackler family removed more than $10 billion when Purdue’s OxyContin was directly causing countless addictions, hundreds of thousands of deaths, and tearing apart millions of families is further reason that we must see detailed financial records showing how much the Sacklers profited from the nation’s deadly opioid epidemic.” Going on to say, “We need full transparency into their total assets and must know whether they sheltered them in an effort to protect against creditors and victims.”

The lawsuit brought against the Sacklers asserts that Purdue Pharma and the Sacklers contributed to the crippling opioid epidemic in the US that has so far claimed the lives of nearly 400,000 people since 1999 through their aggressive marketing campaigns to push opioids to patients while downplaying their addiction and overdose risks. The Sacklers argue that they were passive board members of Purdue Pharma who were not involved in the marketing of OxyContin.

However, reports have found that, in 1996, at a launch party Dr. Richard Sackler compared the release of OxyContin to that of a natural disaster saying the drug would “be followed by a blizzard of prescriptions that will bury the competition.” Litigation brought against the Sacklers by the state of Massachusetts in January of 2019 highlight how the Sacklers added fuel to the epidemic by “weaponising stigmatisation” highlighting a 2001 email sent by Sackler saying, “We have to hammer on the abusers in every way possible,” continuing, “They are the culprits and the problem. They are reckless criminals.”

Predictions For European Golf In 2020