As is now traditional, Samsung has kicked off the latest CES show in Las Vegas with its Sunday evening First Look event. And in terms of both the range and sheer size of kit on show, it’s been by far Samsung’s biggest showcase to date.

Kicking things off during the first look’s introduction were new 88-inch and 150-inch Micro LED screens (the bigger of which carried an 8K resolution!), Samsung’s new QLED 8K flagship, and a trio of Samsung’s gimmicky-sounding but actually rather cute Sero ‘rotating’ TVs.

These eye-catching openers were then backed up by more a glut of other screens and audio products, presented in separate exploration zones. 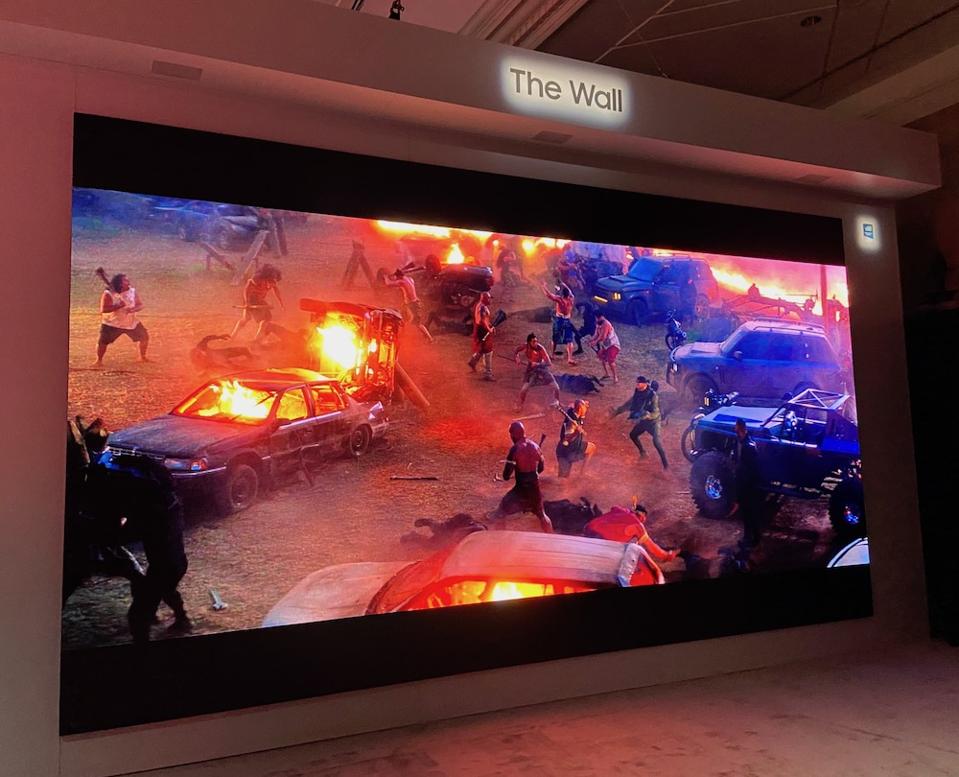 Samsung was also running demonstrations here to remind us of the potential of Micro LED’s modular design (each screen is built from an array of much smaller panels) to deliver screens of all sorts of different shapes and sizes.

Needless to say all of these Micro LED screens looked jaw-droppingly good: Incredibly bright, astonishingly rich in color, and beautifully rich in black level. Samsung still seems determined to ‘consumerize’ Micro LED in 2020, though even if they actually manage to do it this year, I think you can safely assume that you’ll need very deep pockets for even the 75-inch screen. 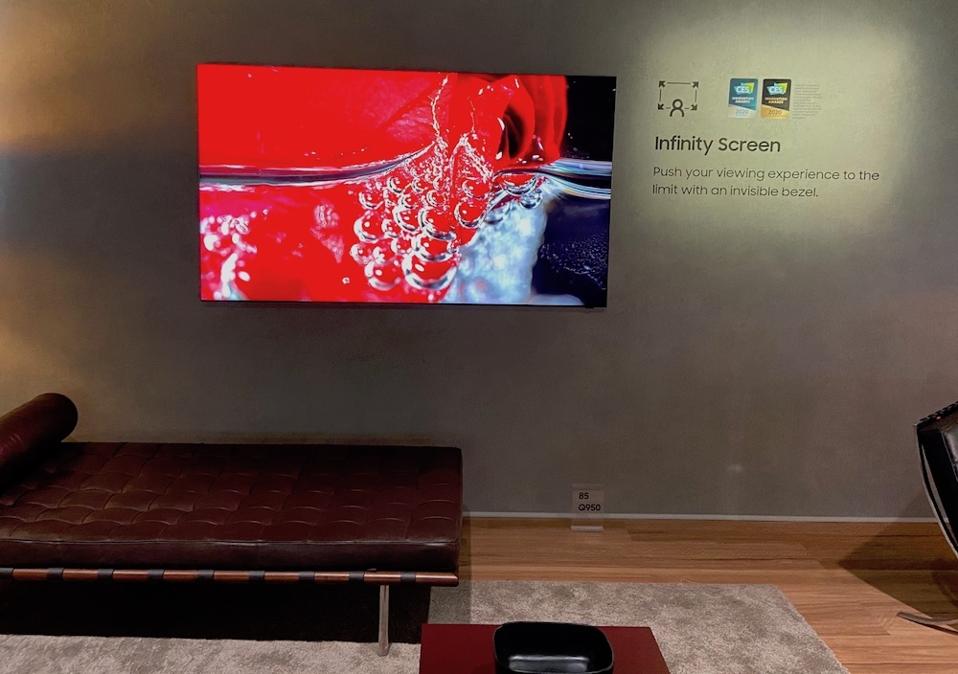 The Samsung Q950ST’s bezel is so slim you can’t see it from a normal viewing distance.

The 85Q950T boasts Samsung’s really rather lovely new ‘bezel-free’ Infinity design. The design isn’t in truth completely bezel free, but since what bezel there is comes in at under 2mm, it does become hard to see from a typical viewing distance. And the impact this has on the directness of your relationship with the pictures your watching is really quite uncanny.

I’ll talk about the Q950TS in more detail in a separate ‘First Impressions’ article soon.

The Q900T appears to be a (US-only) variant of the Q950TS without a one-connect box, while the not bezel-free but still attractive Q800T is positioned as a new, more affordable way into 8K that will be available in a range of sizes from 55 to 98 inches.

Despite being designed to be affordable, the Q800T will still get Samsung’s full latest Quantum 8K processor, and a full version of Samsung’s new OTS+ sound system, which uses a 2.2.2 speaker configuration (two along the top, two down the side and two along the bottom) to deliver both a bigger soundstage and effects that seem to be coming from exactly the correct part of the screen. 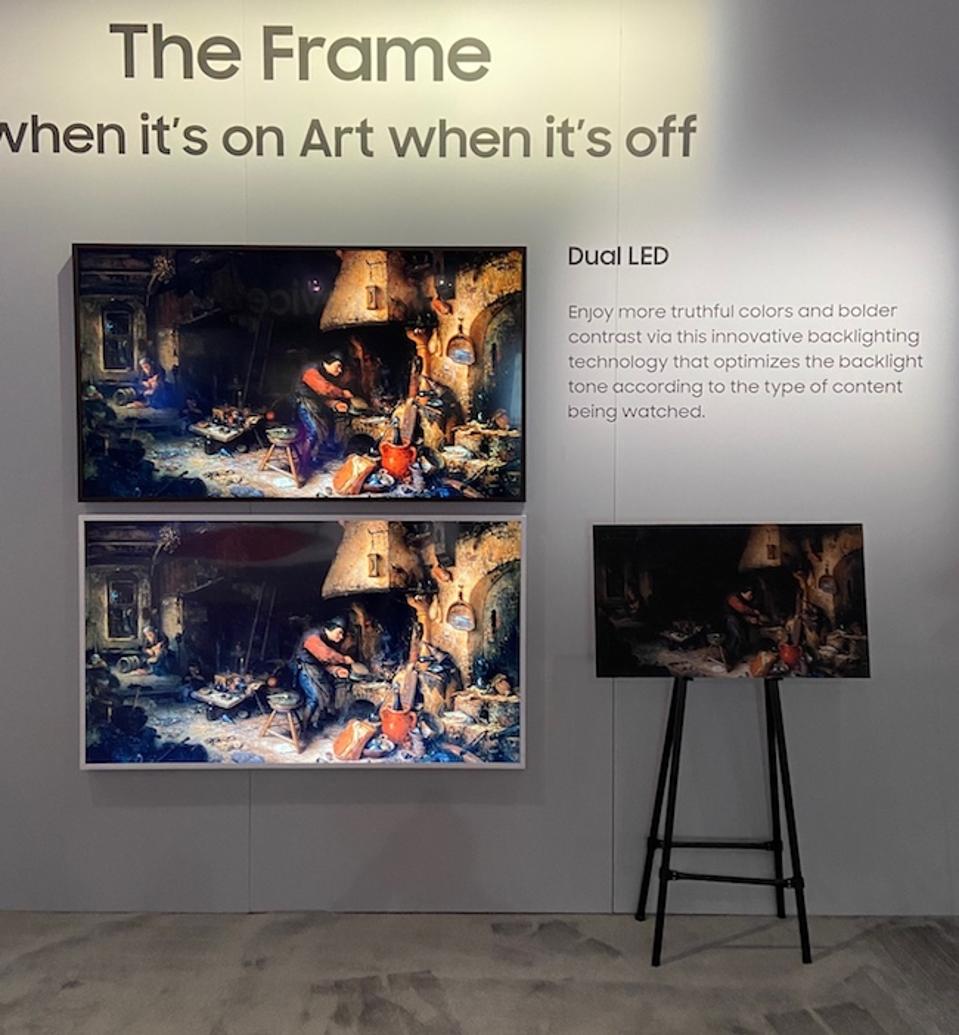 The 8K zone was also being used to show off some of Samsung’s new TV picture and sound developments for 2020, including the latest Quantum processor, new Adaptive Picture technology (a more intelligent system for adjusting HDR pictures in response to differences in your room lighting), and Samsung’s new Q-Symphony concept, where some of Samsung’s latest soundbars work in tandem with (rather than just replacing) the speakers in Samsung’s new 8K TVs, to deliver a better, more precise soundstage.

Samsung isn’t revealing prices for its new 8K TVs yet, but I reckon the Q800T range, at least, will be targeting prices pretty close to what we saw for Samsung’s flagship 4K models last year.

I’ve asked for clarification on this and will update this story when I find out more. 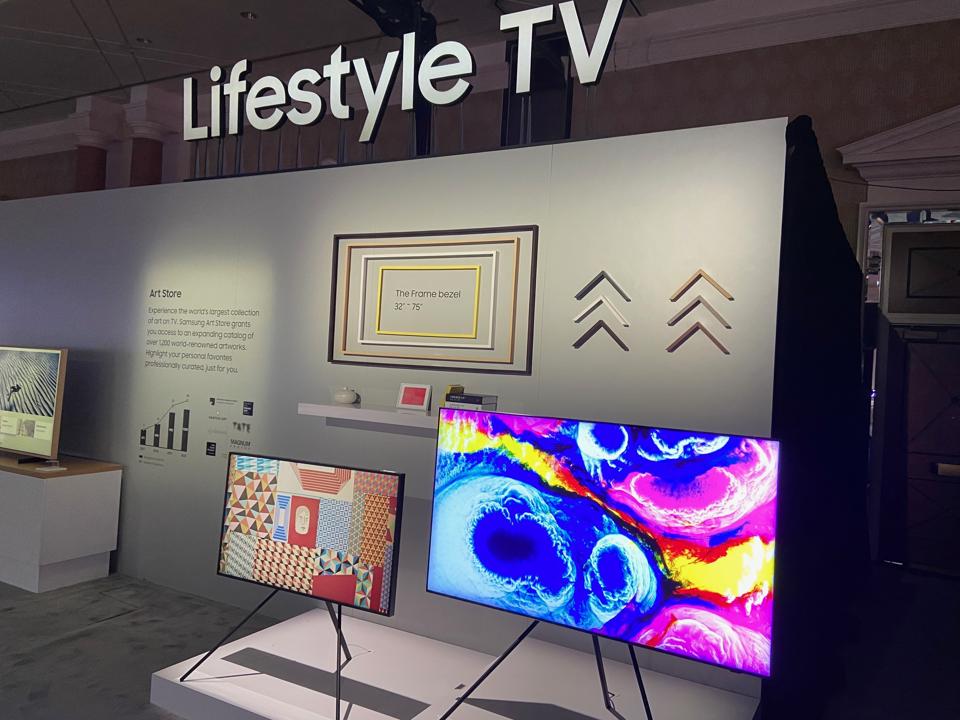 Samsung’s Frame TVs can be used with a variety of different frame designs.

A Lifestyle zone at Samsung’s First Look event, meanwhile, showcased Samsung’s expansive range of ‘designer’ TVs for 2020. Grabbing by far the most attention here was the 43-inch Sero. This TV can rotate on its stand to be viewed horizontally or vertically, to accommodate today’s penchant for filming things vertically on our mobile phones.

The grumpy old git in me wants to hate the whole idea of such a ‘millennial’ TV concept, but it actually does what it does so well that it’s impossible to stay angry at the Sero for long…

Especially as it also carries a 60W, 4.1-channel speaker system to support all those YouTube music videos you’re clearly going to stream on it, and there’s one-touch screen mirroring to make it as easy as possible to ship your content from your phone to the TV.

For its ultimate show-off trick, the Sero can even automatically adjust its orientation to match the way you’re holding your phone. 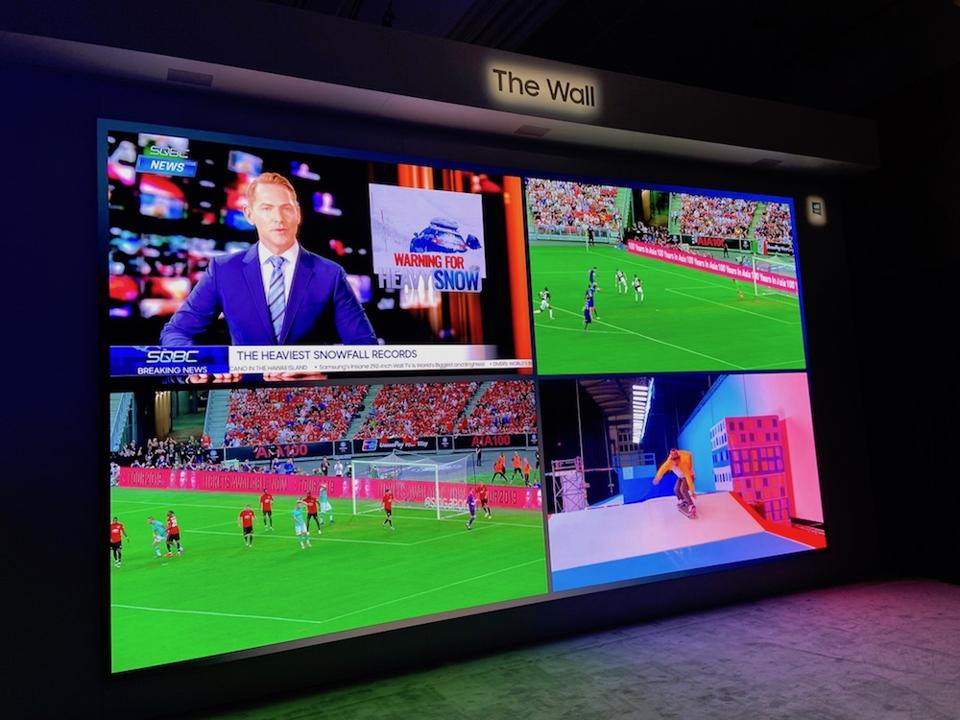 Samsung’s 292-inch The Wall in multi-screen mode. Each of these four picture in picture screens is … [+] as big as a car.

Also on show in the Lifestyle zone was Samsung’s now six-strong range of The Frame TVs. Designed to make your TV look like a painting, the 2020 Frame models will be available in 32, 43, 49, 55, 65 and 75-inch screen sizes, and can be fitted to your wall using no-gap wall mounts and ‘invisible’ connections.

They also get Art Store 3.0, which gives you access to more than 1000 art works that you can choose as ‘screen savers’ when you’re not actually watching TV. Intriguingly the new 2020 Frame sets use both QLED technology and a new technology Samsung calls ‘dual LED’.

Finally in the Lifestyle zone were Samsung’s latest Serif models. Designed by Ronan and Erwan Bouroullec to look like wood-framed, floor-standing artworks, the Serif range for 2020 will feature 43, 49 and 55-inch sizes and an exclusive Samsung ‘Ambient Mode’ option that uses the Serif TVs’ palette of colours. You can now also place your phone on an NFC point built into the TV’s unusually wide top, for easy sharing of phone content on the TV. 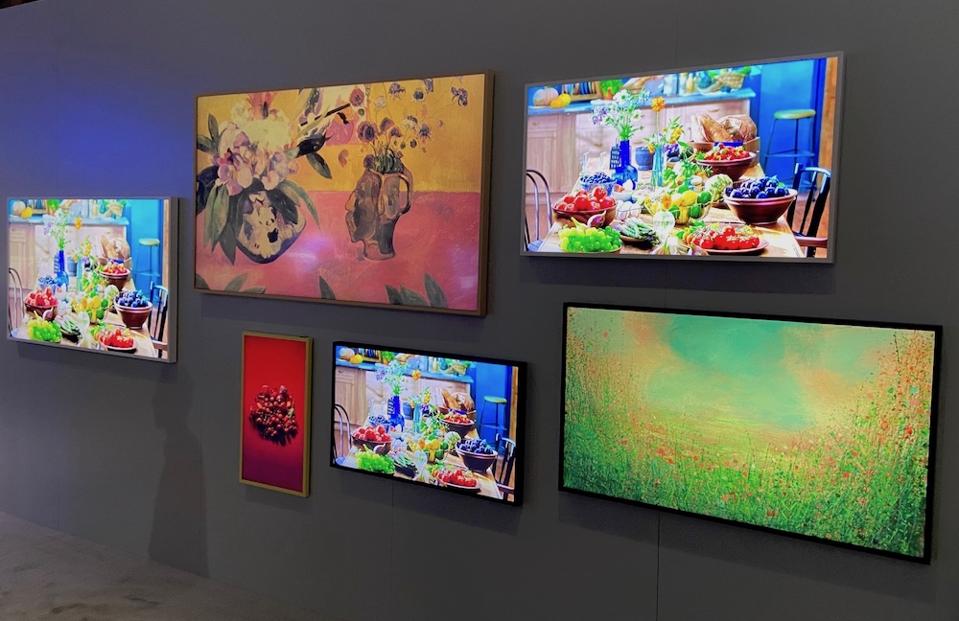 A collection of Samsung’s Frame TVs at its CES First Look event.

Note that there’s no Dual LED support in the Serif sets.

Although I (not surprisingly) didn’t have much time left to spend in Samsung’s other zones, they briefly included a demo of the cool-looking curved gaming monitors I reported on in this earlier story, and a couple of Samsung’s new soundbars.

If Samsung backs its First Look event up with any subsequent press information, I’ll either update this article or publish other stories on my Forbes channel.