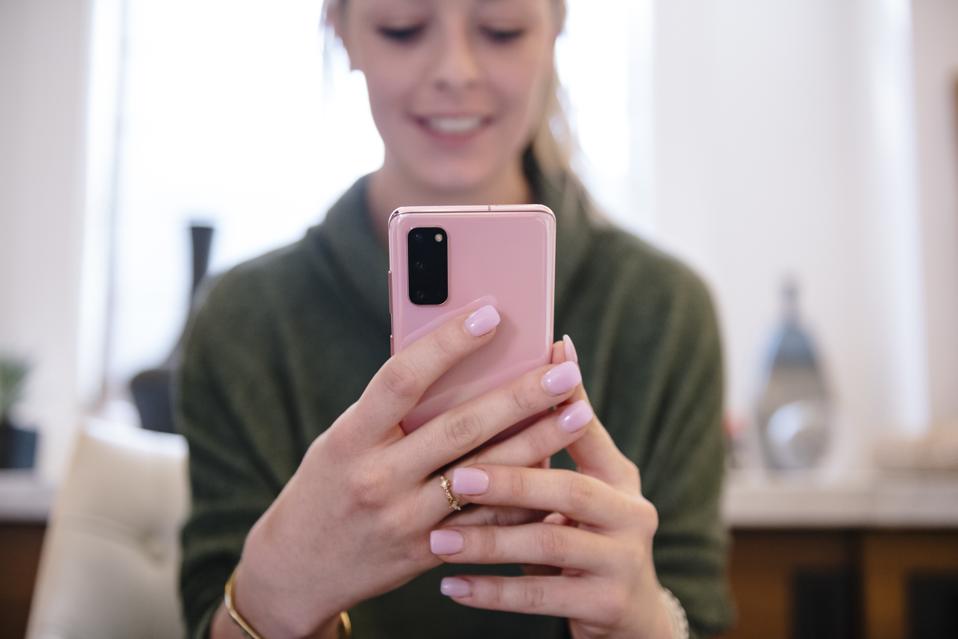 A Samsung Electronics Co. Galaxy S20 smartphone is demonstrated for a photograph during a media … [+] preview event in San Francisco, California, U.S., on Friday, Feb. 7, 2020. Announced at simultaneous events in San Francisco and London, Samsung’s Galaxy S20 family of Android phones has a 6.9-inch Ultra model with four cameras on the rear — which include a 108-megapixel sensor as well as 100x zoom — 16GB of memory, a huge battery and an eye-watering $1,399.99 starting price. Photographer: Michael Short/Bloomberg

I can’t believe any smartphone could support a 100X zoom. That’s the big announcement from yesterday in a steady stream of big Samsung reveals. I watched all of them light up on the Samsung Mobile feed on Twitter and it was much easier than the alternatives, e.g., finding them on YouTube, hunting around on the launch website, or reading about them on gadget sites.

One thing about social media — it’s all about streamlining.

There’s no better way to find out about the device — not on Facebook (which is more cluttered and has fewer posts about new products) and not on Instagram.

In an epic string of posts, Samsung announced the Galaxy S20 smartphone, the one that supports 100X zoom (called Space Zoom). It’s only available in the S20 Ultra model. In case you’re wondering, that’s enough to zoom in on a squirrel from across a football field (your mileage may vary — I need to test out the phone to make sure.)

It’s amazing, but what is even more startling to me is how quickly these tweets came pouring out yesterday and now today. The 24 posts in a row at last count — most of them were videos that show off the new features — have caused a stir with followers. So far, 259,163 people have voted on their favorite version of the new S20 — the Ultra is winning by a wide margin of 63.8%. The main S20 tweet above has over 3,000 likes and the Samsung launch event tweet has almost 13,000.

It’s easy to find out about new features. One post explains how the new smartphone supports 1.5TB of storage. Another highlights the 8K video quality (thanks to the 108-megapixel camera). It’s all right there in the tweets.

Just about any company or brand can learn from how Samsung unleashed this boatload of tweets in such a short time, and how people tend to use social media in the real world.

The main lesson — more is more. Samsung Mobile knows people will go to the feed itself and not wait for notifications on their phone. They will search Google for “Samsung twitter” and start clicking away. They will use aggregators like SproutSocial or HootSuite and have their feeds configured to show up in a row (or a column).

When you do a barrage of posts, you are essentially asking people to wade through all of them, even if they move on eventually to another feed. And, it works.

They could have used a different strategy. I know some companies do a more gradual unveiling — say, a handful of posts running throughout the day or the week. Almost all of the Samsung tweets appeared within seconds of each other (they are marked right now as 21 hours old).

Another good lesson? It creates excitement. It’s easy to rely on a scheduler like Buffer to roll out your posts in a predetermined fashion, but Samsung chose to go big.

The new models are certainly feature-packed, but the bigger shock is how well the social media strategy worked. I know all about these devices now. It took me about 10 minutes.

There’s One Thing Missing From Call Of Duty:...