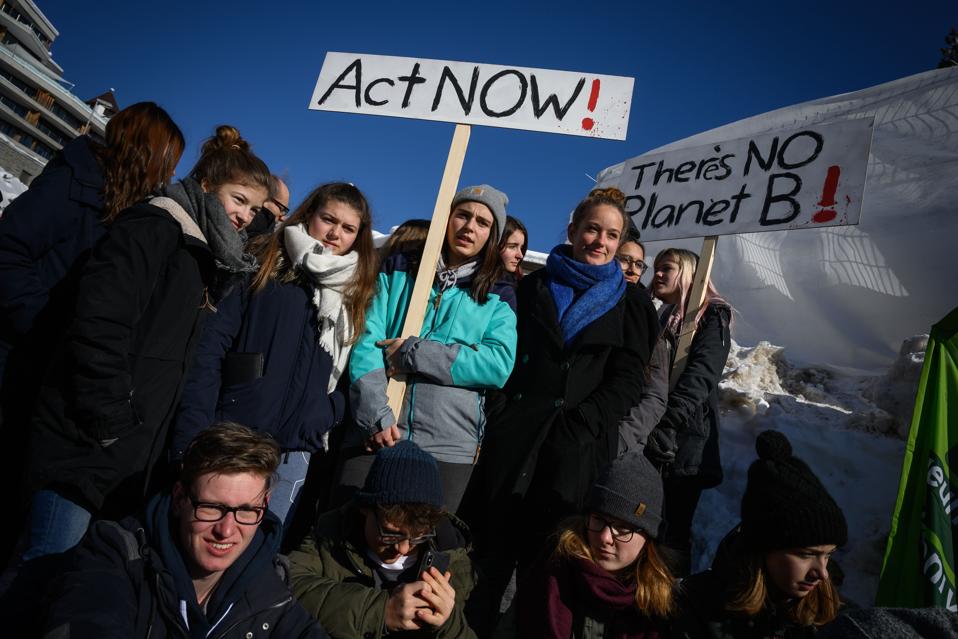 As the first World Economic Forum summit of this decade in Davos approaches, several announcements and launches are taking place to define the direction of sustainability across industries, with a notable focus on fashion. The upcoming Study Hall – Climate Positivity At Scale conference in New York (and live-streamed online) later this month will bring together eminent environmental scientists, chemists, fashion designers and activists to push the sustainability conversation beyond incremental and marketing-driven initiatives towards a decade of “listening to the scientists,” as urged by activist Greta Thunberg. The Study Hall Conference will use the UN Decade of Action to begin writing a new chapter in fashion history, where science is its closest collaborator.

Fashion and science have historically had a tricky relationship. Fashion reinvents itself perpetually and is heavily influenced by art, politics and popular culture, dancing to the beat of ephemerality, fleeting trends, and creative whims. Science employs a rigor and methodology that demands an entirely different and resolutely rational approach. The environmental situation we find ourselves in today demands that the two sectors harness the power of each other to fulfill our collective climate goals.

I spoke to Robin E. Bell, the ground-breaking Geophysicist and environmental scientist based at LDEO, Columbia University, who has been correlating antarctic ice sheet changes over the past three decades with projected climate change and agreed to speak at the conference for two reasons. One is practical and action-oriented, with the very top line message being “the planet is changing and we are the cause of it.” The second is her belief that the fashion industry can take an intellectual and emotional lead by being part of the climate conversation. She also urges collaboration, saying “it’s very clear that we have to build partnerships across all industries so we have the knowledge to look at this [climate change] as a system.”

This is where the fashion industry has struggled. Sustainable transformation in the context of the industry’s total environmental impact (from design to end-of-life) has been difficult to diagnose and evaluate. Without capturing the critical data and applying appropriate analysis any transformation strategy is a guess—educated or otherwise. This is where listening to the scientists (and digitizing the supply chain to ensure all required data is collected) comes in.

On the topic of the supply chain, Bell will urge fashion companies to assess the use of energy and the amount of CO2 generated, (and therefore the contribution to increased global temperatures) in their supply chain. The subsequent actions of the industry should be “looked at in relation to the CO2 budget,” she stated. Underpinning this is a shift from fossil fuels to renewable energy sources.

The concept that people think we are doomed—we are not. We are fortunate as a species to be able to see what we are doing. We, as a species, can look at the planet as a whole. We can see how this global system works. We haven’t done that yet because we haven’t gotten awareness of the problem.

What’s striking about the conversation with Bell is that she is utterly optimistic and warns again a fatalistic attitude to climate change. Knowing the facts, I asked why. “We have a lot of resources on the planet— solar, wind, nuclear. The application of this knowledge and the will to do so is missing.” How can the fashion industry help catalyze action toward renewable energy? “Fashion conveys the sense that our planet is a beautiful home in a way that other industries can’t. “Fashion can be a platform for the voice of science” because it is largely visual, and that way communicates universally. It is far more difficult to communicate what we cannot see, like carbon emissions. If the message of science can be delivered by fashion that is a powerful partnership.

The fashion industry is powerful because everyone sees fashion, it is a way to communicate.

A fashion brand with a voice it isn’t afraid to use is Noah Clothing. Co-founded by Estelle Bailey-Babenzien (interior designer) and Brendon Babenzien (ex-Design Director at Supreme) and based in NY, the brand shares global environmental news interwoven with fashion product images and photos of their community—devotees of the skate, music and fashion scenes.

We present a lot of terrifying facts to our customers, but in the middle of that we are a brand that talks about skateboarding. 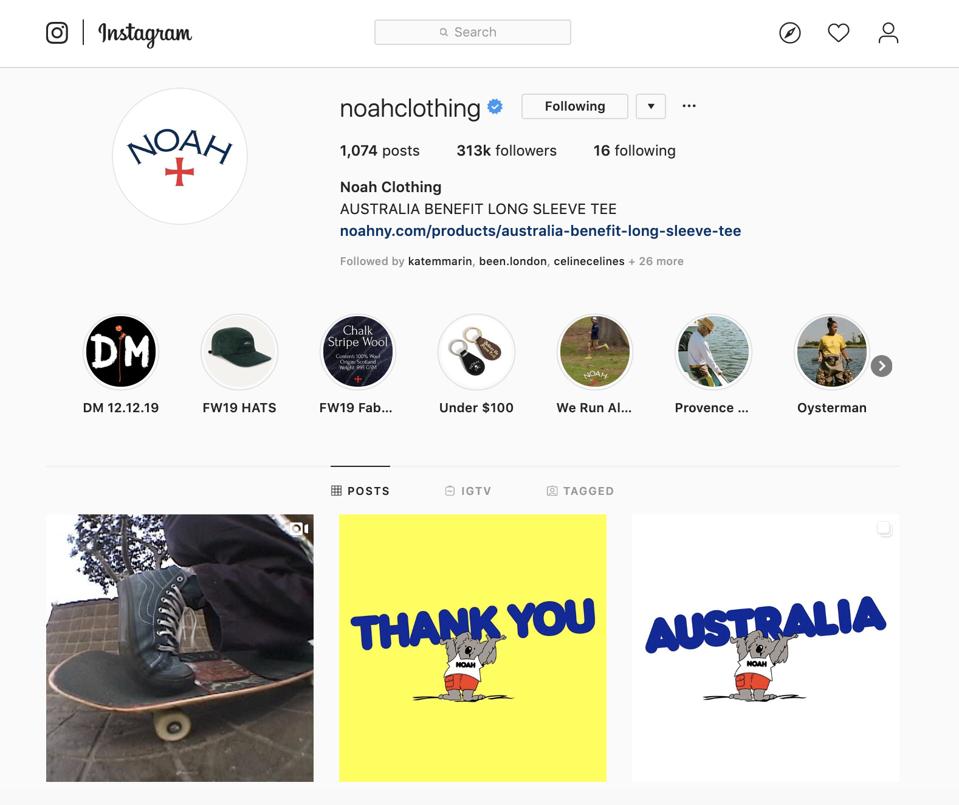 If fashion is synonymous with culture and lifestyle, then the decisions each of us make about what we wear says something about your beliefs and values. Noah Clothing’s values are rooted in a commitment that puts morals ahead of profits. “We will not grow if it means making a decision we are not proud of. If the conversation becomes about paying people less, that’s not appropriate.” This no doubt draws admiration, dedication, and trust from fans of the brand, which is why when Noah Clothing speaks, their community listen.

Babenzien reflects on the business values he saw as a kid growing up in the ’80s. “It was all about ROI, what Wall Street is saying, the money value. But if you make people sick in the process it is a failure,” he said.

If you have to factor in human suffering everything changes—you’re not going to make as much money. We need a complete and total value shift about how we talk about things.

Noah Clothing will contribute to a discussion at the conference on why fashion isn’t sustainable, presenting open and honest viewpoints about why sustainability is often talked about, but rarely achieved in a measurable, verifiable way. When asked about sustainability initiatives within his brand, he points to heavy reliance on textile mills and suppliers to guide them on sustainable materials. However, without the ability to assess the relative merits of one textile versus another, he says they have chosen to opt for the highest quality virgin and recycled materials to ensure the longest possible lifespan of their garments.

A chemist tackling the lack of verifiable material sustainability data hampering companies like Noah Clothing is the CEO of Bolt Threads, Dan Widmaier. He has overseen the growth of Bolt Threads from a three-person material science startup in 2009 to a biomaterials and fabrics company with over 125 staff that has raised over 215 million dollars in investment. Since inception, Bolt has worked on the principle that nature is making extraordinary protein-based fibers that, if they could be made synthetically, would require far less planetary resources. A win for the planet, and a win for those wanting to take advantage of the billions of years of evolutionary refinement that nature has distilled in those natural fibers. Following nature’s blueprint and introducing lab-based efficiencies has led to Bolt Threads developing their Microsilk (synthetic spider silk) and Mylo products (a mycelium-based leather alternative) in small batches to test via designer collaborations. 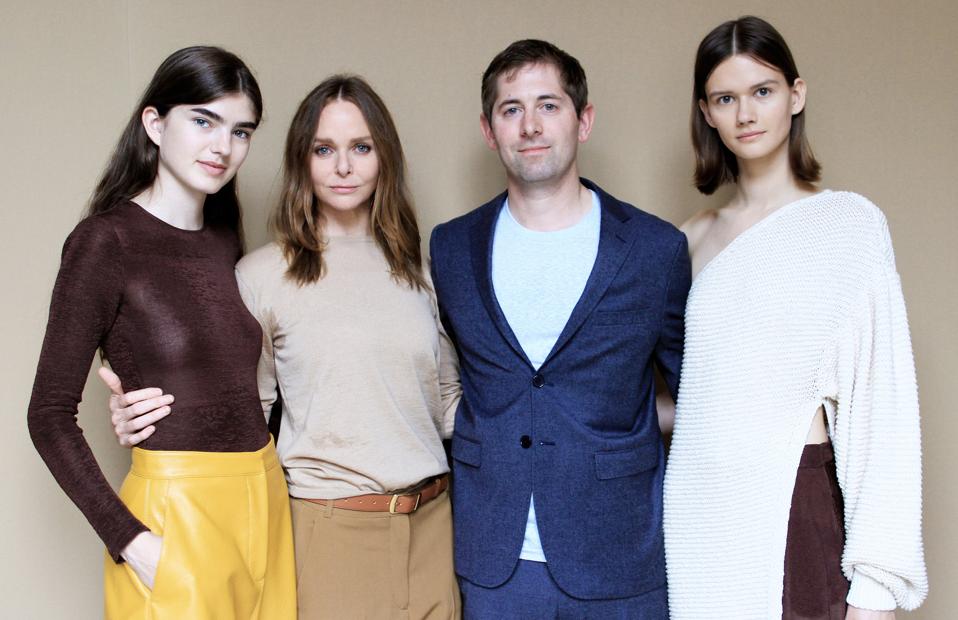 Bolt Threads are very aware of the power of fashion to tell the story of science and have worked with Stella McCartney and adidas to release small ranges of sportswear knitted from Microsilk yarns. At the conference, Widmaier will discuss the role and methodology of Life Cycle Analysis, which is the current best practice tool for assessing the total environmental impact of a material or product—information that would be highly useful for fashion brands, including Noah Clothing, who do not create their own textiles.

It is evident that a symbiotic relationship between fashion and science is evolving, along with a moral imperative for the fashion industry, as a global leader in visual storytelling, to present a version of the planet we want to live on, to counter the current doom and gloom view of climate change. The Climate Positivity At Scale Conference is bringing this unique array of speakers together to foster a new fashion and science debate and instigate new collaborations. Other speakers at the conference, which is free to attend, include actress and advocate Yara Shahidi, Creative Director of Timberland, Christopher Raeburn and the fashion designer Mara Hoffman. Sustainability and regenerative farming experts from G-Star Raw and Hudson Carbon will also be amongst the speakers.

Celine Semaan, Founder of Slow Factory Foundation, a non-profit design lab and sustainable literacy initiative based in New York, established the Study Hall summit series in 2018. Reflecting on the purpose of the upcoming conference she said “fashion has only had a platonic relationship with science so far. What Study Hall is aiming to do is infuse the industry with important knowledge to accelerate the actions needed to achieve a reduction of 30% of carbon emissions by 2030, leading up to zero carbon emissions by 2050.” This feat is surely only achievable by bringing together science-based facts and the powerful voice of fashion. The Climate Positivity At Scale Conference is set to start a new chapter in the partnership that will facilitate this action.

The FBI Got Data From A Locked iPhone 11 Pro Max — So Why Is It Demanding Apple Unlock Older Phones?

Napoli Accused Of “Abuse And Intimidation” Of Their...

The Winning Formula For F1 Photography

Lies And The Lying Liars Who Try To...

The Promise Of Technology For Health In 2020...