See Anything Similar In Those Super Bowl LIV Helmets? 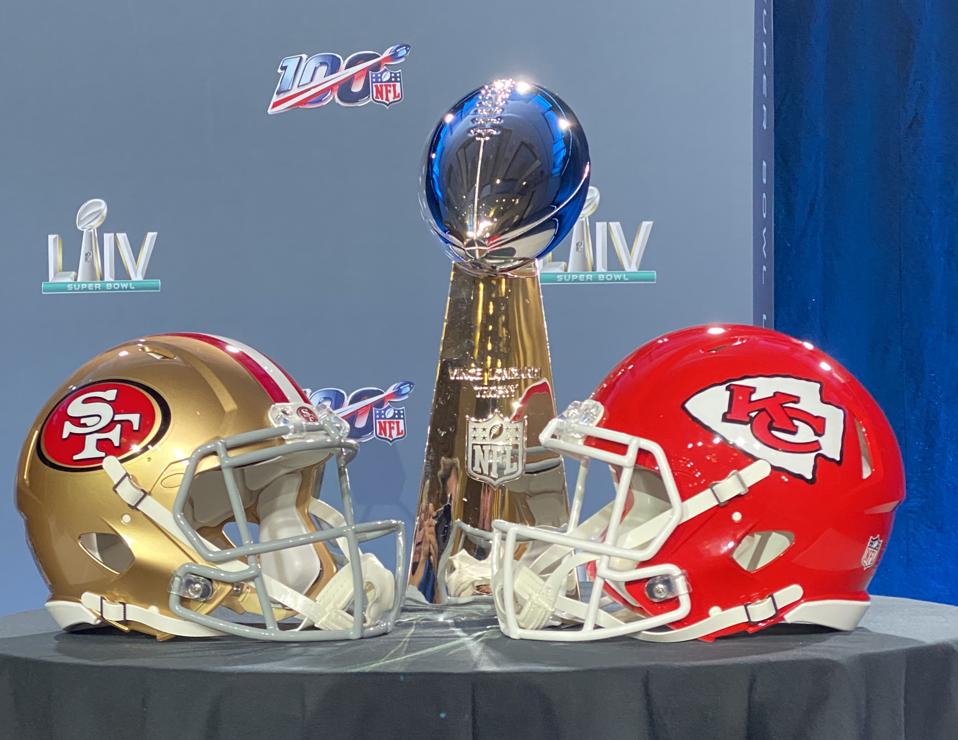 MIAMI, FL – JANUARY 29: The Vince Lombardi Trophy is displayed before the Commissioners press … [+] conference with a San Francisco 49ers and Kansas City Chiefs helmet on January 29, 2020 at the Hilton Downtown in Miami, FL. Photo taken with an iphone 11 Pro. (Photo by Rich Graessle/PPI/Icon Sportswire via Getty Images)

When you tune into Super Bowl LIV, take a closer look at the helmets of the teams butting heads, the Kansas City Chiefs and San Francisco 49ers. (Or you can just look at the photo above.) Notice that the interlocking “KC” on the Chiefs’ red helmets and the “SF” on the 49ers’ gold helmets look very similar.

This is no coincidence! And there is a cool story, of course, of how it happened.

According to the amazing Gridiron Uniform Database, the 49ers were one of only three teams in 1961 in the 14-team National Football League without something on the sides of their helmets — the Chicago Bears and Cleveland Browns were the others.

(Some teams had the jersey numbers of the players. The Washington Redskins had white arrows running down the middle of their helmets.)

The 49ers felt they needed to catch up with the times. So Martin Jacobs, the spry septuagenarian who is the 49ers’ historian, told me that the Niners’ display department designed a logo for their silver helmets: a red oval, trimmed in black, with an interlocking “SF” inside for 1962.

The Bears added the white, lopsided wishbone “C” to their navy helmets the same year, leaving the Browns and the American Football League’s New York Titans and Oakland Raiders as the only teams without something on the sides of their helmets. The Browns’ are still barren, 57 seasons later.

The owner of an AFL team noticed the 49ers’ helmets — and liked them. At the time, Lamar Hunt owned the Dallas Texans, who had a white outline of the state of Texas, with a yellow star marking Dallas, on their red helmets. The Texans won the 1962 AFL championship wearing them.

But soon they would be on the move, to Kansas City, and even though Hunt wanted at first to call his team the Kansas City Texans, he was talked into another nickname, the Chiefs. Hunt kept the team’s colors of red and gold, but he needed something new for the helmets.

According to the Chiefs’ website, Hunt did a sketch on a napkin of an arrowhead. Inspired by the interlocking “SF” on the 49ers’ helmets, he drew an overlapping “KC” that is virtually identical to the Niners’ logos. And the Chiefs have worn it ever since.

The 49ers, at first a member of the All-America Football Conference, started in 1946 with red and white as their colors, then bounced back and forth between gold and silver as a secondary color before moving to gold for good in 1964. 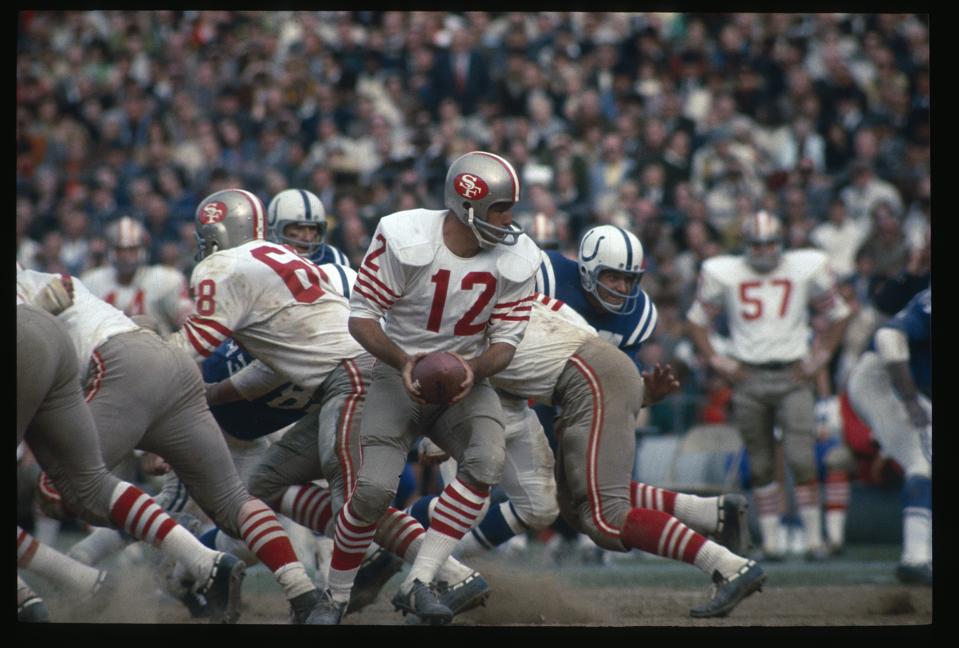 BALTIMORE, MD – CIRCA 1960’s: John Brodie #12 of San Franicisco 49ers, turns to hand the ball off … [+] against the Baltimore Colts during a mid circa 1960’s NFL football game at Memorial Stadium in Baltimore, Mayland. Brode played for the 49ers from 1957-73. (Photo by Focus on Sport/Getty Images)

Except for about one week in 1991, the 49ers have had the “SF” on their helmets, too. Owner Eddie DeBartolo had the “SF” replaced with “49ers” because he felt his team represented the entire Bay Area, but public reaction was so negative the logo was scrapped. It is perhaps the greatest NFL logo story of all time.

And that was a good thing, because two teams with iconic and historic logos will now clash in the Super Bowl. But Jacobs the record to be cleared about something else: the 49ers did not get their nickname directly from the 1849 California Gold Rush — but from a train.

“The `Forty Niners’ team name was incorporated by then-owner Tony Morabito when he gained an AAFC franchise in 1946,” Jacobs wrote in an email. “During the 1930s and early ‘40s, Morabito received great service and had fond memories of the luxury train called the Union Pacific Forty-Niner streamliner which ran from San Francisco to Chicago.”

Jacobs added: “Many 49ers’ followers think the team was named after the 1849 California Gold Rushers. Indirectly, maybe so, as the streamliner train was probably named after the gold rushers. In addition, Morabito also was inspired by the colors of the Forty-Niner train. Of course the gold miners wore red wool shirts also.”

Tony Morabito had built a successful lumber-hauling business in San Francisco, and he thought the city had earned a pro football team, and, a bit ironically, it was easier to travel by air than it was by train. The NFL, then without a team west of Chicago and Green Bay, scoffed. The bold AAFC took Morabito on instead.

The team wore red and gold only in 1947 before switching to red and silver for all but three years until 1963 — the reason being that that coach Buck Shaw was known as the “Silver Fox.” Morabito, sadly, never got to a Super Bowl. He died at age 47 of a heart attack.

And Morabito, who had been told by doctors to cut down on stressful activities, died during a 49ers’ game in Kezar Stadium against the Chicago Bears. But the 49ers, losing 17-7, rallied for a 21-17 victory after being told of the owner’s passing. The helmet logo would come later. 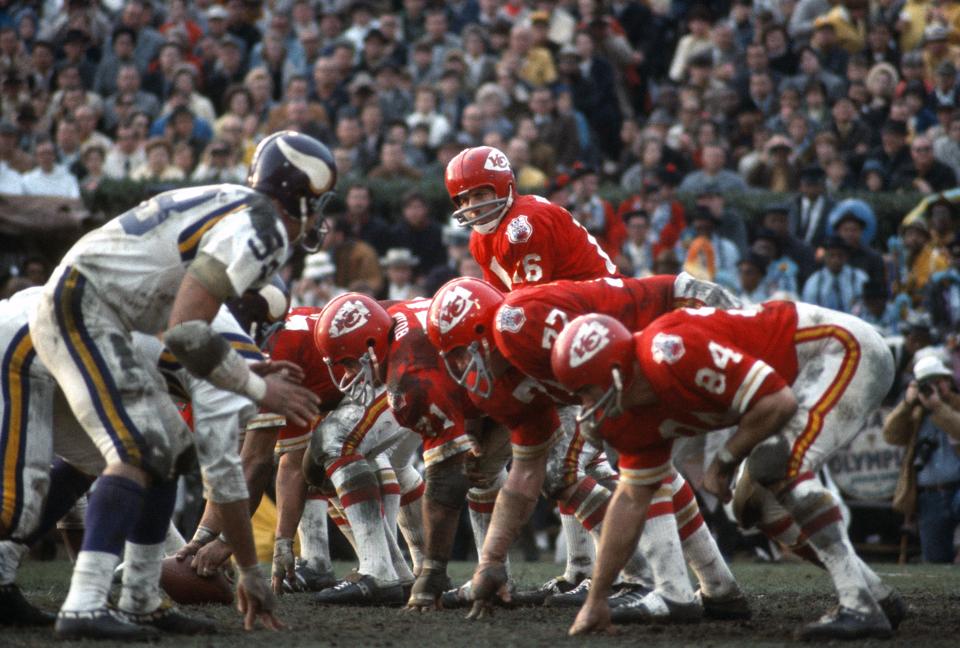 NEW ORLEANS, LA – JANUARY 11: Len Dawson #16 of the Kansas City Chiefs stands under center and calls … [+] out the signals against the Minnesota Vikings during Super Bowl IV on January 11, 1970 at Tulane Stadium in New Orleans, Louisiana. The Chiefs won the Super Bowl 23-7. (Photo by Focus on Sport/Getty Images)

How To Drive Long-Term Startup Success In Turbulent...