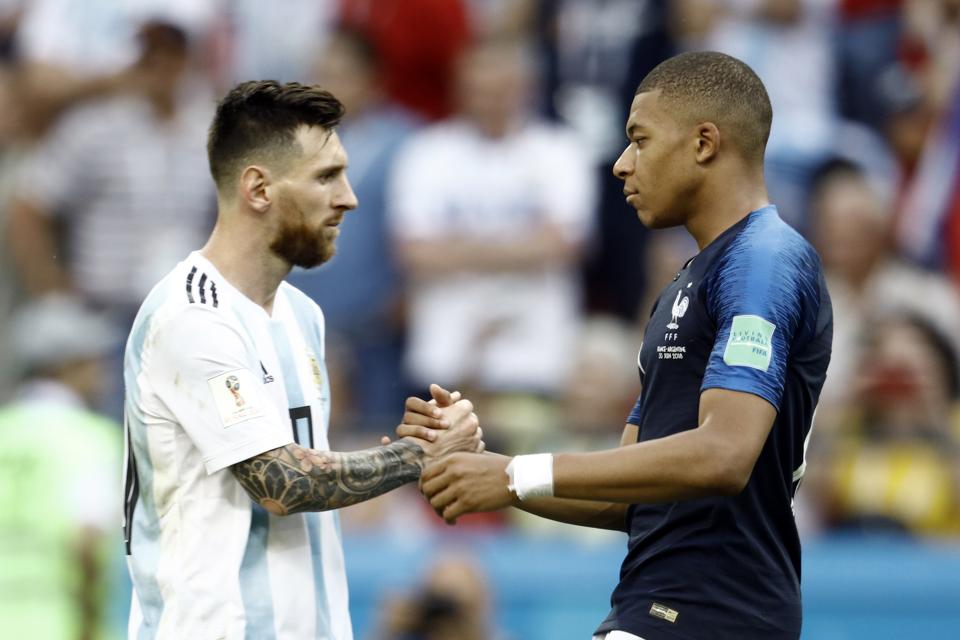 Lionel Messi (l) of Argentina and Kylian Mbappe of France at the 2018 FIFA World Cup Russia Round of … [+] 16 match. (Photo by Mehdi Taamallah/NurPhoto via Getty Images)

It cannot go on forever. We have already seen Cristiano Ronaldo slip out of realistic contention for major individual awards over the last year although there is always a chance of one last hoorah.

Lionel Messi has the advantage of being 30 months younger but inevitably the time will come when the little magician leaves the world stage.

Kylian Mbappe of PSG and France is seen as the heir apparent to the title of the world’s best and having just turned 21 his best years should still be ahead of him.

But who else might be in contention in four or five years time?

Of course, soccer’s scrapyard is littered with players who were over-hyped in their teens and never came close to realizing the great expectations placed on them.

Being labelled a “Wonderkid” more often than not, has turned into a curse. (IMO, the only description worse than “wonderkid” is the gag-inducing “starlet.”)

So without attaching either cliché to any of these players, here are six teenagers (plus Jadon Sancho) who a year ago we had hardly heard of, but who may soon become the world’s best.

They have the skills and over the next few years we will find out if they have the right stuff.

A year ago Haaland signed a 5-year contract for Red Bull Salzburg after spending two years with Molde FK in Norway. Haaland scored 16 goals in 30 games for Molde in 2018 but that was nothing compared to what was in store in 2019.

The teenager scored 29 goals in 27 games for Red Bull including 8 goals in 6 UEFA Champions League games. Haaland also made his debut for the Norway national team a few months after scoring 9 goals against Honduras at the FIFA-Under 20 World Cup.

Not surprisingly Haaland’s goal scoring exploits attracted interested from all the top teams in Europe – especially when it was made known that Haaland’s buy-out clause was just €22.5m ($25.3m).

Last week, it was announced that Borussia Dortmund had landed Haaland and both parties had signed a contract through to June 30, 2024. Every move in Haaland’s soccer career so far has been meticulously planned and executed.

Fati just turned 17 in October but his performances have already fueled expectations – perhaps to levels that are unrealistic.

“Wonderkid” makes for a good headline or tag but it wasn’t so long ago the same tired label was being hung on Bojan Krkic.

In August, he became Barcelona’s youngest player since just after the Spanish Civil War when he played against Real Betis and just a week later he scored his first goal for the club in a 2-2 draw against Osasuna.

He also became the Champions League youngest ever scorer when he scored the winning goal against Inter Milan with just 4 minutes to play.

Fati is already well-built and when you add pace and tight control he has the makings of a defender’s nightmare.

So far this season Fati has made 13 appearances for the Barcelona first team and has scored 3 goals. He was named to the squad against Espanyol for Saturday’s derby that finished 2-2 but he remained on the bench.

Foden is a player that England holds great hopes for but he has played relatively little football for a player of his ability and promise.

When we have seen him he has been impressive but without an extended run some doubts are going to remain.

He made himself known to a broader fan-base when he helped England win the 2017 FIFA Under-17 World Cup hosted by India. Foden scored two goals in a 5-2 win over Spain in the final and subsequently he was named as the winner of the Golden Ball.

It’s difficult to discern whether it is a case of Foden being unable to beat the talented competition for starting places in a gifted Manchester City squad or a case of Pep Guardiola handling the youngster with care.

Perhaps we will have to wait until David Silva retires or leaves next season before we see what Foden is fully capable of.

Foden signed a contract extension in December 2018 that runs until June 2024.

With more than 23 appearances and over 1,700 minutes of playing time already with Rennes this season Camavinga is already an established player rather than a youngster being given an opportunity here and there.

What is most amazing about this youngster is that he is outstanding in what I would argue is the most difficult position to play – holding midfielder.

The position needs at a minimum positional sense, anticipation, athleticism, and great tackling. So far, Camavinga has shown mastery of each and it comes packaged with elegance and ease.

In August 2019, Camavinga was named Player of the Month in Ligue 1. His contract runs until June 2022.

In 2016 Davies made his senior debut for the Vancouver Whitecaps and a year later became the youngest player to play for Canada’s national team. He followed that landmark up by becoming Canada’s youngest ever scorer.

In the summer of 2018, the Whitecaps and Bayern Munich announced that Davies would move to the Bundesliga team in January for a fee of $13.5m rising to $22m with possible add-ons. 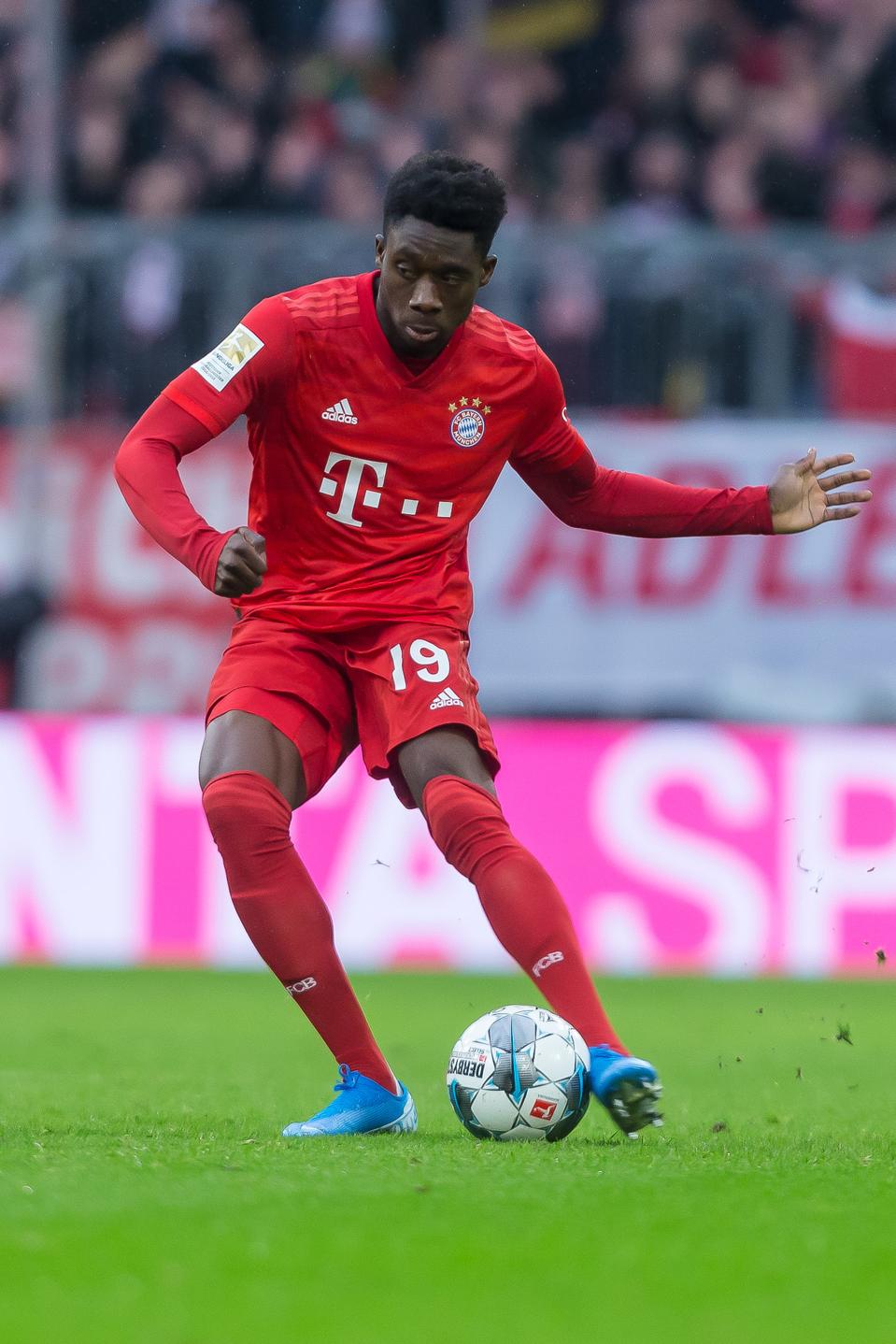 When it comes to raw talent and athleticism Davies has been blessed. Regarded and fielded initially as a left winger Davies is now more accurately described as a left sided player having also played left-back and wing-back for club and country.

Davies has already racked up over a thousand minutes in playing time for Bayern this season in the Bundesliga and Champions League and his progress looks to be ahead of schedule. Davies contract with Bayern Munich runs to June 2023.

Real Madrid officially signed Rodrygo from Santos last summer but the deal was in place for a long-time before that. The only thing standing in the way was FIFA’s transfer regulation governing the transfer of under-18 players.

The fee of $50m tells you everything you need to know about Rodrygo’s potential and it was no surprise when he was promoted to the first team after just 2 games for Real Madrid Castilla.

The youngster also made his debut for Brazil in mid-November in a 1-0 loss to Argentina and then received his second cap four days later against South Korea.

He shows good strength on the ball and is a good dribbler and an intelligent passer.

Rodrygo became the youngest ever player to score a hat-trick in the Champions League in the 6-0 thrashing of Galatasaray in November. His contract runs until June 30, 2025.

Sancho was on Manchester City’s books but frustrated with the lack of opportunities he lobbied for a move and signed for Borussia Dortmund in August 2017.

He made 12 appearances in 17/18 but the next season he really hit his stride with 12 goals in 34 appearances and he made his senior debut for England. This season Sancho has already scored 9 goals in just 15 appearances. 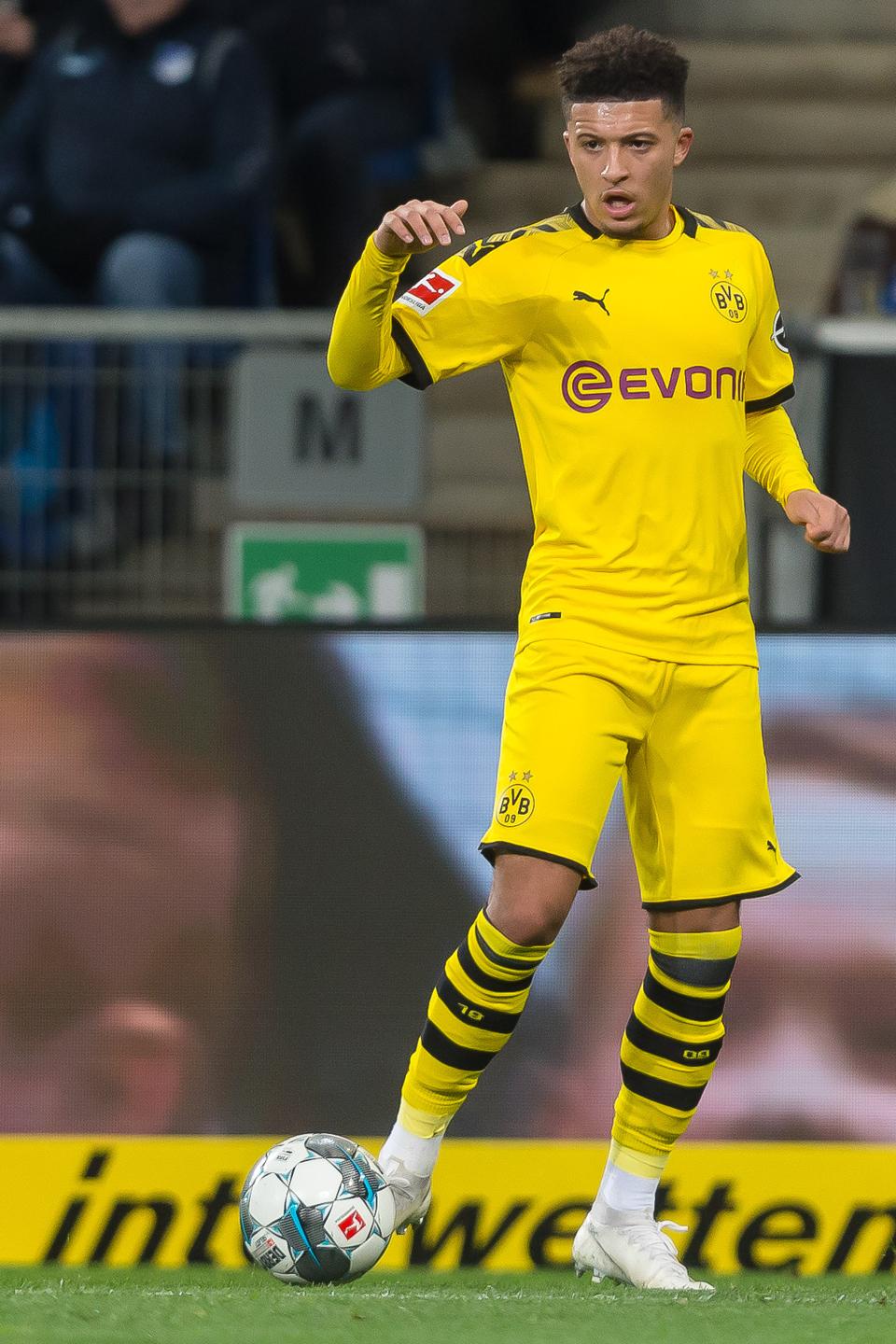 Sancho may have some weaknesses in his defensive game but he is blessed with talent when it comes to attacking – both scoring and creating goals.

Sancho goes past defenders with the sole focus of creating a goal scoring opportunity. He’s under contract with Dortmund until June 30, 2022 but not a week goes by without Sancho being linked to a high priced transfer. Whether it is pounds, euros, or dollars, nine numbers are usually quoted.

Lucy Campbell Riding The Crest Of A Wave...

Worried About Traveling Due To Coronavirus? Your Credit...