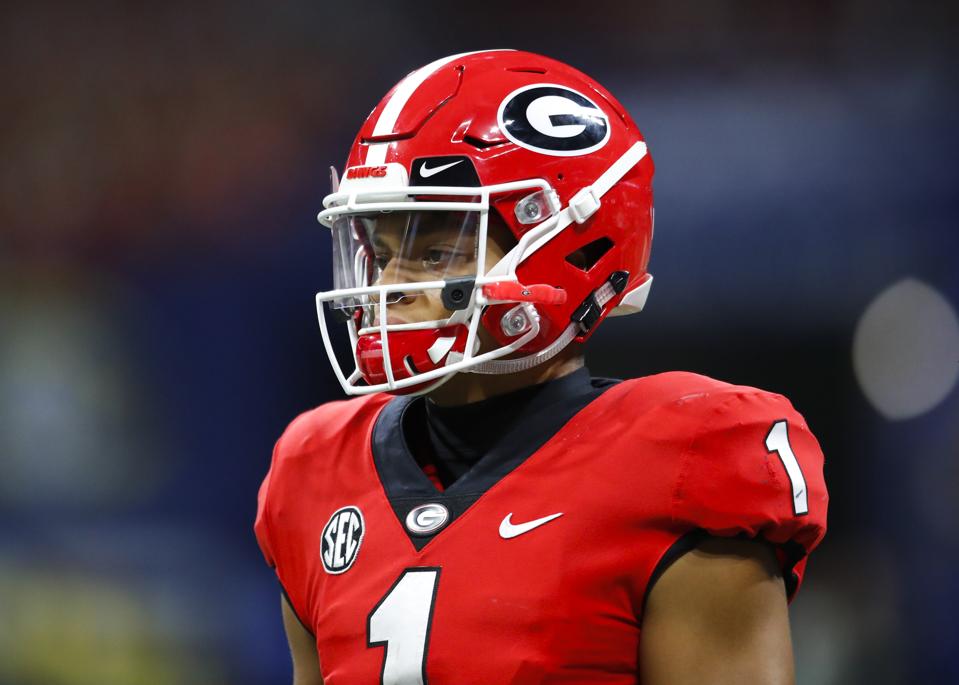 As Georgia and Ohio State careen towards a potential matchup in the first round of the College Football Playoff, a very serious question comes to mind: what if Justin Fields had stayed at Georgia? The quarterback transferred to Ohio State after limited playing time during his 2018 campaign, and in the process, he has led the no. 1 Buckeyes to an 11-0 record while throwing 33 touchdowns as a Heisman favorite. Meanwhile, the man who drove him out of Athens, Jake Fromm, has struggled over the course of the season. Georgia remains one of the best teams in the country, but Fromm’s lack of production has limited the Bulldogs. If Fields had stayed at Georgia, the college landscape would likely look very different.

The University of Georgia has, undoubtably, one of the best college football teams in the country. The Bulldogs have three top-15 wins and are ranked fourth in the country heading into week 14. If they win the SEC Championship, they will almost definitely, for the second time in three years, be selected to the College Football Playoff. The defense has allowed more than 20 points just once this season, and that was in overtime. Quite seriously, the team is close to building an SEC East dynasty similar to the Florida teams of the mid-2000s. This team should legitimately be in the national championship conversation along with LSU, Ohio State, and Clemson.

But they aren’t, at least not today. FiveThirtyEight gives the Bulldogs just a 9% chance of winning the national title and 49% chance of making the playoff, just above Oklahoma and Utah. According to ESPN’s playoff predictions, Georgia has a smaller chance to win the national title than Alabama, and Alabama isn’t even playing in a conference title.

This is almost certainly due to Georgia’s offensive struggles this season. The defense remains one of the best in the country. It is the fifth most efficient according to ESPN and has allowed the second-fewest points per game, just behind Ohio State. The offense, on the other hand, has scored 30 points or more in only four of the team’s 11 games so far. Two of those contests were against non-Power Five schools. The defense hasn’t allowed ranked opponents to score more than 17 points, but each game was won by just one score.

Much of this can be attributed to Fromm. Generally speaking, his production has slipped this season. His yards per attempt have dropped by 1.5, and his current passer rating of 144.1 is by far the lowest of his career. He has thrown for just 17 touchdowns and is completing just 63.4% of his passes, down from 67.4% last season. In Georgia’s only loss this season, Fromm went 28-51 and threw three interceptions including a second quarter pick-six. He got off lucky, too. A fourth quarter interception gave South Carolina the opportunity for an easy field goal to win, but the kicker missed. It’s hard to pin all the blame on one player, and Fromm is certainly not the only reason Georgia has struggled offensively, but he has definitely been a part of it.

To make things worse for Georgia fans, as Fromm has struggled, Fields has been remarkable. The hardest part is that, generally speaking, the biggest thing separating Ohio State from Georgia is the offense. Both defenses are remarkable, allowing under 11 points per game, and Georgia has arguably played more impressive games. However, Fields, once an afterthought at Georgia, has turned Ohio State’s offense into one of the best in the country.

While Fields’ remarkable success at Ohio State is surprising, it is important to put his career path into perspective. The other quarterback in Trevor Lawrence’s recruiting class, it’s easy to forget just how highly rated he was coming out of high school. He was the nation’s second ranked recruit and the highest rated dual threat quarterback, accruing more than 40 offers in the process. But, unfortunately for him, Fromm cemented his status as the starter after leading Georgia to the national title game in 2017 and an SEC title appearance in 2018.

But, to Georgia’s credit, Fromm was certainly the most reasonable answer at quarterback even with Fields on the roster. He established himself as one of the best quarterbacks in the country early in his career, replacing Jacob Eason, now Washington’s quarterback, in 2017 after Eason hurt his knee in the first game of the season. He led the Bulldogs to an SEC title and the National Championship game, throwing for 24 touchdowns and 2,615 yards and running Eason out of town in the process. In 2018, his production increased. He threw for 30 touchdowns as he led Georgia to the SEC Championship game yet again. His performance in 2018 established himself as a 2019 preseason Heisman candidate but drove five-star recruit Fields to Ohio State in the process.

Now, a year later, it’s hard not to wonder what the college football landscape would look like this year if Fields hadn’t transferred. Ohio State has a particularly good offense both through the air and on the ground, but how much of that has to do with Fields? His ability as a passer and runner likely opens up the running game. Would he have the same effect on SEC defenses? With 33 touchdowns, 1 interception, and a 190.3 passer rating, Fields is quite simply one of the best quarterbacks in the country. It’s hard to imagine him not improving Georgia’s offense.

Moose Knuckles Piles On The Flash With Its First U.S. Store

The Only One Business Show – The Self-Reliant...

How That Chilling ‘Hunters’ Opener Helped Set The...

Napoli Needs To Show Style In Serie A...