It was arguably the landmark space mission of the last decade, and it’s still delighting astronomers even after its death. After 13 years at Saturn, the ringed planet, in its dying days NASA’s Cassini spacecraft conducted a spectacular “Grand Finale” in which it got close to Saturn’s poles. Scientists are busy analysing some of its final data from the flybys—including images of Saturn’s ultraviolet auroras in unprecedented resolution.

Aurora are known as the Northern Lights and Southern Lights on Earth. On Earth they’re caused by charged particles from the Sun—the solar wind—interacting with Earth’s magnetosphere.

Aurora Borealis, the Northern Lights, over the Vestrahorn mountain in the east of Iceland. (Photo by … [+] Owen Humphreys/PA Images via Getty Images)

At Saturn, it’s all very different. Its atmosphere is dominated by hydrogen, so auroras can only be seen in ultraviolet light. The same applies to auroras around Jupiter, Uranus and Neptune. Another main difference is that the aurorae rotate together with the planet.

“Man questions about Saturn’s auroras remain unanswered, even after the outstanding success of the Cassini mission,” says Alexander Bader, Lancaster University PhD student and lead author of two new studies published in Geophysical Research Letters and JGR:Space Physics. “This last set of close-up images gives us unique highly detailed views of the small-scale structures that couldn’t be discerned in previous observations by Cassini or the Hubble Space Telescope.”

Composite of a true colour image of Saturn, observed by Cassini in 2016, overlaid with a false … [+] colour representation of the ultraviolet aurora in the northern hemisphere as observed on 20 August 2017.

Have aurorae been photographed before at Saturn?

Back in 2018, the Hubble Space Telescope took a series of photos of fluttering auroras at Saturn. The observations were taken in ultraviolet light and gave astronomers the most comprehensive picture so far of Saturn’s northern aurorae.

This image is a composite of observations made of Saturn in early 2018 in the optical and of the … [+] auroras on Saturn’s north pole region, made in 2017. In contrast to the auroras on Earth the auroras on Saturn are mainly visible in the ultraviolet — a part of the electromagnetic spectrum blocked by Earth’s atmosphere — and therefore astronomers have to rely on space telescopes like the NASA/ESA Hubble Space Telescope to study them.

What do the new images show?

Now that’s been surpassed, with Bader’s research using images from Cassini in 2017 revealing more about the mechanism that causes them. “The images are different from previous data in that they show an incredible amount of detail we have never seen before,” says Bader, who was able to observe aurorae on the dusk side of Saturn for the first time. “What is puzzling to us is the incredible variability we observe in the data,” he continues. “In comparison to Earth, Saturn has a much larger magnetosphere and the auroral dynamics are much less controlled by the solar wind.”

A magnetosphere is the region around a planet dominated by the planet’s magnetic field. 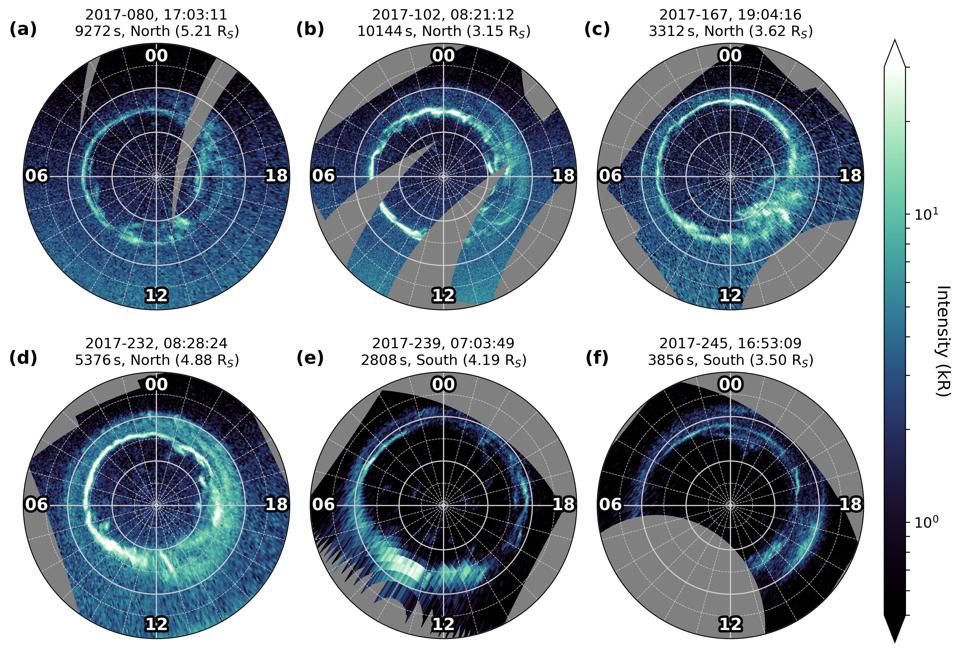 Selection of (nearly) full views of the (a-d) northern and (e-f) southern auroral oval obtained … [+] during Cassini’s Grand Finale mission phase. The view is from above the north pole, down onto the northern or “through” the planet into the southern polar region; local noon (12 LT) is at the bottom and dawn (6 LT) at the left. Grey concentric rings mark colatitude from the pole in steps of 5◦, radial lines mark local time in steps of 1h. The images are sorted by the time of their observation; start time, exposure time, observed hemisphere and radial distance of Cassini from Saturn’s surface are given at the top of each panel. The differences in background brightness (dayglow) between the northern and southern hemisphere are a seasonal effect; 2017 was a year of northern summer and southern winter.

How do Saturn’s aurorae work?

Saturn’s aurorae are known to be highly dynamic, often pulsating and flashing. It’s thought that the massive size of Saturn and its rapid rotation (which takes a mere 11 hours) are the main causes of its aurora, which should mean they remain fairly static. “In this set, there are rarely even any similarities or repetitive features at the dusk side,” says Bader, “which makes it very hard to correlate what we see with other observations and find out what generates these small patches, blobs and fine arcs.”

It’s all very different to how aurorae are caused on Earth. “The solar wind doesn’t have a direct impact on the aurora,” says Bader about Saturn. “After a coronal mass ejection it is the increased number of solar wind particles and their increased energy that causes the Earth’s aurora to brighten, whereas at Saturn a brightening does not necessarily happen.” 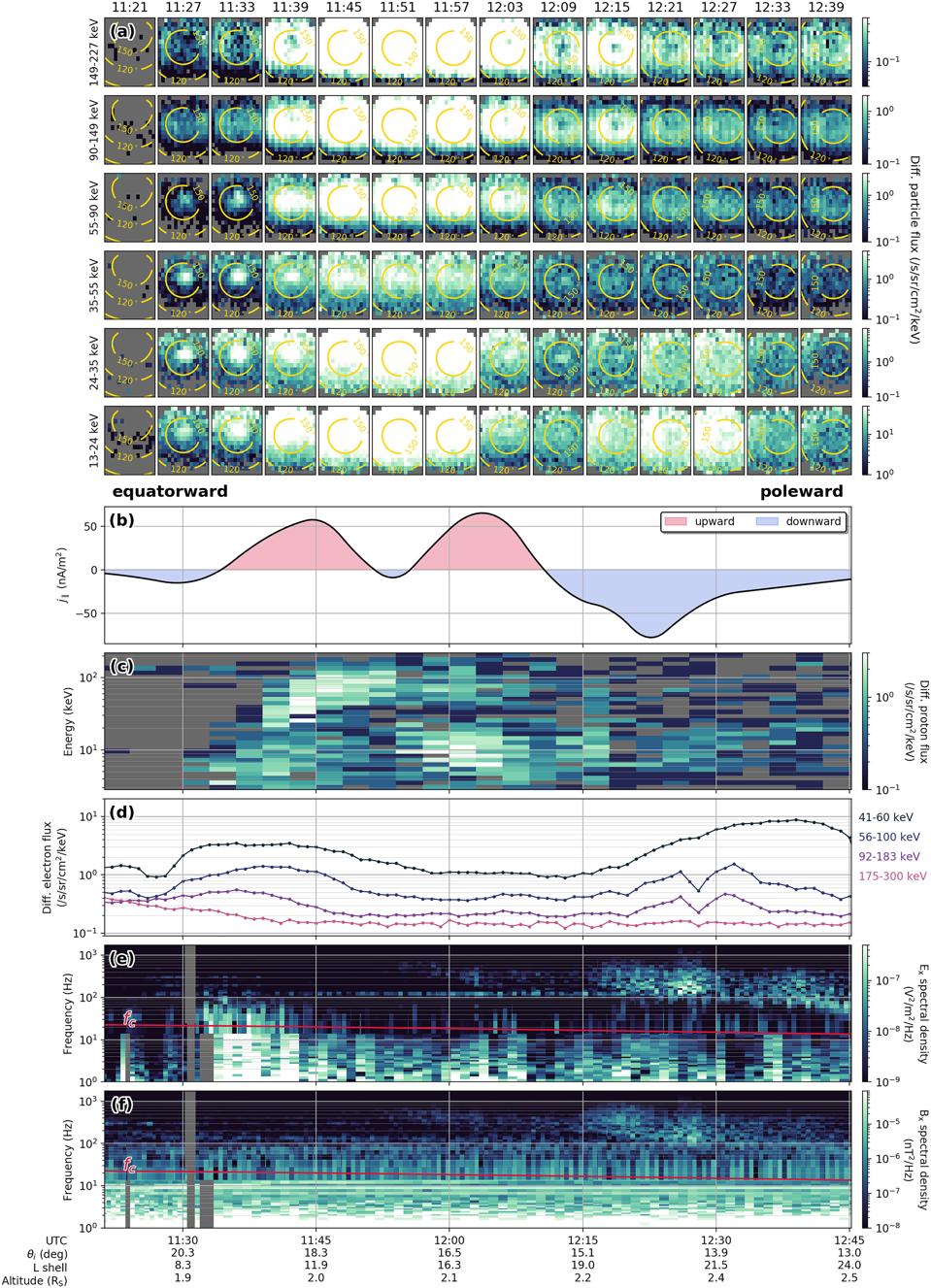 Overview of Cassini particle and wave measurements from 2017-009. (a) Cassini INCA proton … [+] observations, each panel showing the differential proton flux at a certain time and within a certain energy range. Magnetic pitch angle contours are overlain in yellow; note that Cassini was in the southern hemisphere and 180◦ pitch angle (∼ center of each subpanel) corresponds to the upward direction. (b) Inferred field-aligned currents at Cassini’s ionospheric footprint. (c) Cassini CHEMS proton flux spectrogram ⟂ to B and (d) Cassini LEMMS electron flux measurements ⟂ to B. (e) Cassini RPWS electric and (f) magnetic field spectrogram; the local proton gyrofrequency 𝑓c is indicated with a red line.

During its two low passes over Saturn’s aurora zones, Cassini was sometimes embedded in the particle stream that connects aurorae to the planet’s magnetosphere. Analysis of the spacecraft’s particle measurements recorded during these times showed that Saturn’s auroras, like Jupiter’s, are generated by much more energetic particles than Earth’s.

olar projection of two Cassini UVIS images of Saturn’s aurorae from (a) 2017-009 (southern … [+] hemisphere) and (b) 2017-102 (northern hemisphere), seen from above the north pole with noon toward the bottom. The auroral intensity is shown in logarithmic color scale. Cassini’s magnetically mapped footprint (Burton et al., 2010, internal field model with Bunce et al., 2008, ring current contribution) is overlaid in white and highlighted in red to mark the corresponding image exposure. The spacecraft’s radial distance, latitude, and local time position at the start of the exposure is indicated on the bottom left of each panel; the start, duration, and hemisphere of each exposure on top.

However, although Saturn appears to have strong electric fields that accelerate electrons down into the atmosphere, causing bright auroras, the process appears to more closely resemble Earth’s auroras than previously thought.

Why is Jupiter important for Saturn’s aurorae?

How do giant planet auroras work? It’s still a mystery, but the researchers now intend to compare Cassini’s data with NASA’s Juno observations of Jupiter’s magnetosphere for more clues. “ Earth’s aurora is largely driven by the solar wind, whereas Jupiter’s aurora is powered from within the magnetosphere,” says Bader. “Saturn is often claimed to sit somewhere in the middle, between the Earth and the Jupiter view, showing signs of clear internal driving—for example periodic changes in brightness related to the rotation of Saturn—and solar wind driving, phases where the aurora near completely disappears.”

Particle energies are significantly higher at the giant planets. “There are still many differences in how the particles are energized enough to create aurora that we’re trying to make sense of,” says Bader.

Auroras are also known on Mars, Uranus and Neptune. “Our knowledge of them is at best highly limited,” says Bader. “A future mission visiting either or both of those systems is highly important to advance our knowledge of auroral physics.”