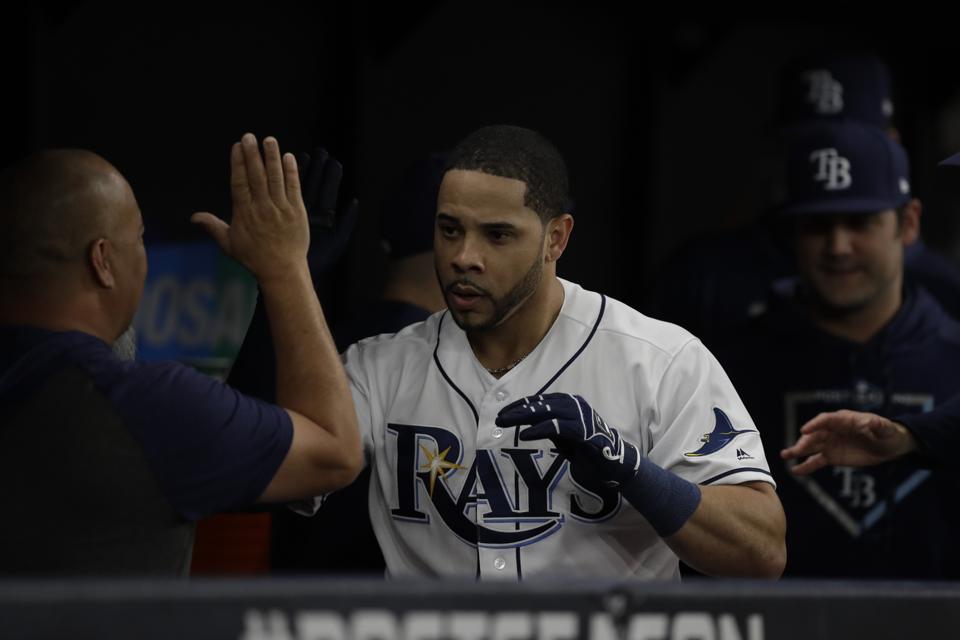 How do the Tampa Bay Rays continue to put together contending teams with a roster that may cost less than what Gerritt Cole and Anthony Rendon will make by themselves next year? Consider their trade of outfielder Tommy Pham and prospect Jake Cronenworth for the San Diego Padres’ outfielder Hunter Renfroe and shortstop prospect Xavier Edwards. On the surface, it’s a strange move for the Rays to make. They made the wild card game in 2019, and nearly ousted the Astros in the AL Division Series. They weren’t losing any major players via free agency. Why, in a year they hope to contend, would they make a trade that hurts them in the short term?

The answer is that they can cover well enough for the loss of Pham, and get good value for him now. With two seasons left of team control, and Pham, 31, no longer baseball young, a significant injury is all it would take to tank Pham’s value. Trade him now, however, and he nets an outfielder in Renfroe that offers both floor and ceiling, and an exciting prospect in Edwards, as well as some cost savings. At worst, this trade spreads out comparable value from the two years remining on Pham’s contract over more years, and there is upside for plenty more.

Renfroe is known primarily for his power, outfield defense, and propensity for striking out. The first two helped him cover for the third. His .216 batting average and .289 on-base percentage were ugly, but he still managed a 2-win season, according to FanGraphs. If he can find a way to get his on-base percentage up a bit, he’s got the tools to be incredibly valuable, but baseball history is filled with players who would be stars if only they could hit a little better. While we see the occasional Pete Alonso or Aaron Judge who turn huge power with questionable contact skills into a star-level performance, there are more examples of players with great bat-to-ball skills who manage to add power, such as Jose Altuve and Jose Ramirez. Either way, the defense gives Renfroe a decent floor value, and with him alongside Kevin Kiermaier and Austin Meadows, the Rays should have a top-notch outfield defense.

In Edwards, the Rays get something of Renfroe’s opposite: batting average and speed out of the shortstop position. Rather than trying (and mostly failing) to pull balls over the fence, Edwards approach is to spray hits to all fields, avoiding shifts and taking advantage of his elite speed. He’s only twenty, and could stay at shortstop or end up at second base or centerfield. He’s an especially interesting asset in any scenario where Major League Baseball gets sick of all of these home runs and looks to shift the game toward speed and contact. He might see some time in the Majors in 2021, and could be a full-time player by 2022. Trading Pham before his value sinks too much means that the Rays may have a dynamic force in the lineup at league minimum salaries for the first half of this decade.

The Pham trade likely hurts the Rays’ playoff chances in 2020 and perhaps 2021. However, they can sustain a one to two win hit in their projections in the name of continuing to find solid low-cost value, especially from Edwards. Maybe the monetary savings goes into some added roster depth, further mitigating the loss in present value. Either way, the Rays just found another trade that may help sustain their remarkable run of keeping pace with the Yankees and Red Sox at a fraction of the cost.

Mark Jackson Is The Betting Favorite To Coach The Knicks, Followed By Kenny Smith and Ettore Messina

UFC On ESPN 7 Predictions And Picks: Is...

Seven Teenagers Who Could Become The World’s Best...

How Regulation Of “Harmful Speech” Online Will Do...

How Joe Judge Plans To Build A Competitive...