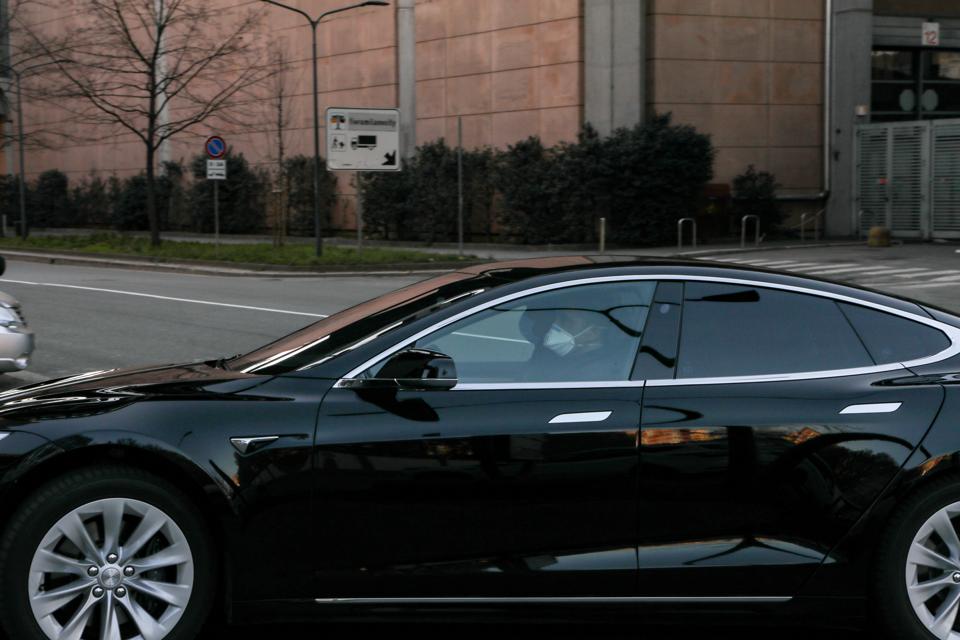 The President of the Lombardy Region Attilio Fontana and Guido Bertolaso arrive at the Milan Trade … [+] Fair in a Tesla on March 16, 2020.

Tesla, which halted electric vehicle production at its main U.S. plant this week, told employees in a memo that two office staffers tested positive for the COVID-19 novel coronavirus, but don’t appear to have been around coworkers in recent days.

The two unidentified people “had been working from home for nearly two weeks” and “were not symptomatic in the office, and both are quarantined at home and recovering well,” Laurie Shelby, Tesla’s safety chief, said in the emailed note, a copy of which was obtained by Forbes. “Their direct coworkers, who were already working from home for nearly two weeks as well, were immediately notified so they can quarantine and watch for symptoms.”

The development comes after Tesla moved slowly to halt production at its San Francisco Bay Area Plant in Fremont, continuing production days after local authorities informed the company that it wasn’t an essential business and needed to comply with stay-at-home rules that currently cover all of California. Workers at Tesla headquarters in Palo Alto and other parts of the state had been given an option to work from home earlier this month while thousands of plant workers continued to report for duty.

The U.S. now leads the world in total coronavirus cases, with more than 81,000 confirmed cases and over 1,180 deaths as of March 26. New York City has become the epicenter, and the biggest U.S. city is struggling to get sufficient supplies of medical equipment to treat the fast-rising number of cases.

During the crisis Tesla CEO Elon Musk has made statements on Twitter that appear to downplay its severity, from describing coronavirus panic as dumb; suggesting “kids are essentially immune”; promoting chloroquine as a treatment without supporting evidence from clinical trials; or that “we will see a significant reduction in the confirmed C19 case growth rate this week” – even as cases continue to rise rapidly.

At the same time, he’s sent thousands of protective masks to health-care workers, secured 1,200 ventilators for use by Los Angeles hospitals and said Tesla’s temporarily idled Buffalo, New York, solar panel factory will begin making ventilators “as soon as humanly possible. We will do anything in our power to help the citizens of New York.”

The billionaire entrepreneur has said Tesla is working with Medtronic to speed up production of those devices, and on Thursday tweeted: “Given NY pressing needs, we’re delivering Resmed, Philips & Medtronic ventilators to NY hospitals starting tonight.”

The two Tesla coronavirus cases come a day after the Los Angeles Times reported two other cases at SpaceX, Musk’s Los Angeles-based rocket company. Work there continues as it’s been deemed an essential business owing to its military contracts. Tesla has provided no information on whether any of its employees in China, where the coronavirus initially broke out late last year, have been infected.

Options For Leveraging Your Home’s Equity: HELOCs And COVID-19

New Orleans Pelicans Revisit Their Past In Loss...

Be Resolved To Put Self-Driving Cars On Your...

Four Tips To Make You A Better Leader

Zion Williamson’s NBA Debut Is On The Horizon,...