‘Thanks A Lot, Mister’: How FC Barcelona’s Stars Reacted To Valverde Firing 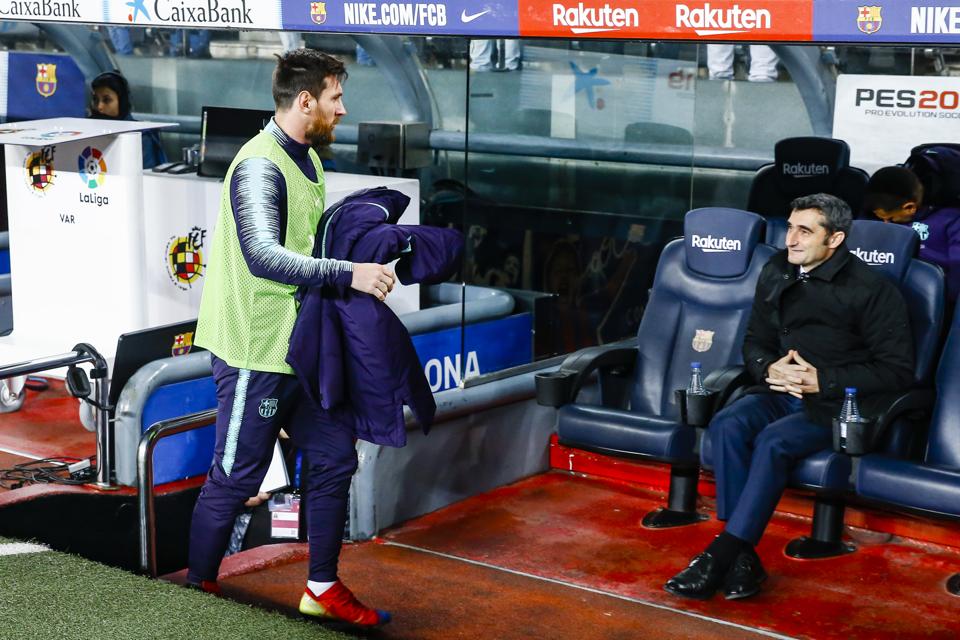 Lionel Messi (10) of FC Barcelona and Ernesto Valverde of FC Barcelona during the match FC Barcelona … [+] against CD Leganes, for the round 20 of the Liga Santander, played at Camp Nou on 20th January 2019 in Barcelona, Spain. (Photo by Mikel Trigueros/Urbanandsport/NurPhoto via Getty Images)

Some of them publicly backing him after Thursday’s fatal 2-3 defeat to Atletico Madrid in the Spanish Super Cup semi-final, the firing of Ernesto Valverde from his role as FC Barcelona head coach is reported to have divided the Camp Nou locker room.

Naturally, then, many of them have taken to social media to thank the 55-year-old for his service the morning after the dramatic announcement was made at exactly 23.15 CET on Monday evening.

‘Thank you for everything, Mister. For sure you’ll be great wherever you go because, besides being a great professional, you are a great person. Good luck and a big hug,’ said Lionel Messi, who scooped his sixth Ballon d’Or under Valverde’s tutelage.

Again leaping to Valverde’s defence in Jeddah, it is believed that Messi kept him in a job following the Anfield debacle – when Barça squandered a 3-0 aggregate lead in last season’s Champions League semi final – but could not save him from the chop on this occasion.

‘Thank you very much mister for all the moments we lived as professionals,’ wrote Luis Suarez. ‘I’ll guard the positives you taught me and [keep in mind] the great human being you are. Thanks to you and all your STAFF for the professionalism. I wish you good luck in everything that comes in the future!’

Like Messi using his mixed zone interview to fight Valverde’s corner, it is tragic that the Uruguayan was injured in his last match under the ex-FCB coach and is now restricted to the sidelines for four months.

His contract expiring in 2021, El Pistolero wishes for an extension but may, due to his recurring knee issues, likewise find himself making an exit from the Catalan giants in the near future.

‘Today closes the cycle of a very important person since my arrival at FC Barcelona,’ commented Arthur Melo. ‘I am here to thank coach Ernesto Valverde for welcoming me so well at the club. It was fundamental to my adaptation in Spain. Thanks for all the conversations that have made me evolve both on and off the pitch. I can only wish good things and success in the next chapters of your career,’ signed off the Brazil international.

‘With you I debuted, grew and learned in the first team. Thank you very much and good luck, Ernesto,’ quipped Riqui Puig, who has yo-yoed between the B squad and its main counterpart this season.

Progressing from said academy in recent times to great senior success on Valverde’s watch however have been attackers Ansu Fati and Carles Perez.

‘Mister, first of all thank you for everything you did for me, you gave me the opportunity to fulfill one of my dreams, you always made me feel like part [of the team], thank you to all your staff for everything I learned working with you, I wish you all the best and many successes. I will be eternally grateful! Thank you so much!!,’ posted the former, who broke into the first XI as a 16-year-old and became the youngest all-time scorer in Champions League history when bagging the winner against Inter Milan in December.

‘Thank you, Mister, for trusting me and giving me the opportunity to fulfill my dream,’ said the latter, who was recently awarded a bumper new contract in light of impressive performances. ‘I wish you and your staff all the best in the future.’

Compassion Isn’t Enough For Family Caregivers. They Need Training Too

Art Of The Deal – How Donald Trump...

Zion Williamson’s NBA Debut Is On The Horizon,...

This Visualization Technology Could Change How You See...

Costs Of Germany’s Nuclear Phase Out Are Substantial,...