Home Technology The 15 Best Space Images Of 2019: From A Black Hole And A New Planet To A Dazzling Solar Eclipse
Technology

The 15 Best Space Images Of 2019: From A Black Hole And A New Planet To A Dazzling Solar Eclipse

It’s been a stunning year for space exploration. Yes, it was the 50th anniversary of Apollo 11, the first crewed moon landing, but so much more happened that increased our knowledge of the cosmos.

Here are 15 of the most amazing space images from 2019, in no particular order: 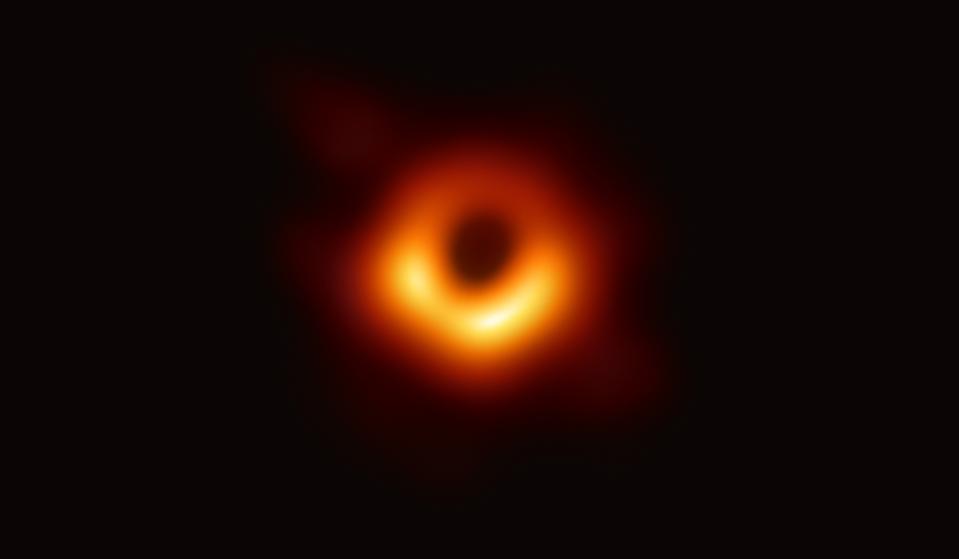 The Event Horizon Telescope (EHT) — a planet-scale array of eight ground-based radio telescopes … [+] forged through international collaboration — was designed to capture images of a black hole. In coordinated press conferences across the globe, EHT researchers revealed that they succeeded, unveiling the first direct visual evidence of the supermassive black hole in the centre of Messier 87 and its shadow.

Were you impressed by the first-ever image of a black hole? If not, you’re not looking at it properly. Created by daily observations of eight ground-based radio telescopes synced to atomic clocks, what you’re looking at is actually the shadow of the black hole in the center of the supergiant elliptical M87 galaxy in Virgo, one of the most massive galaxies in the observable universe.

Remember ‘Oumuamua, the cigar-shaped rock that entered our solar system in 2017 to become the first interstellar object astronomers had ever detected? It happened again in 2019 with the detection of Comet 2l/Borisov, which was also found to host water. 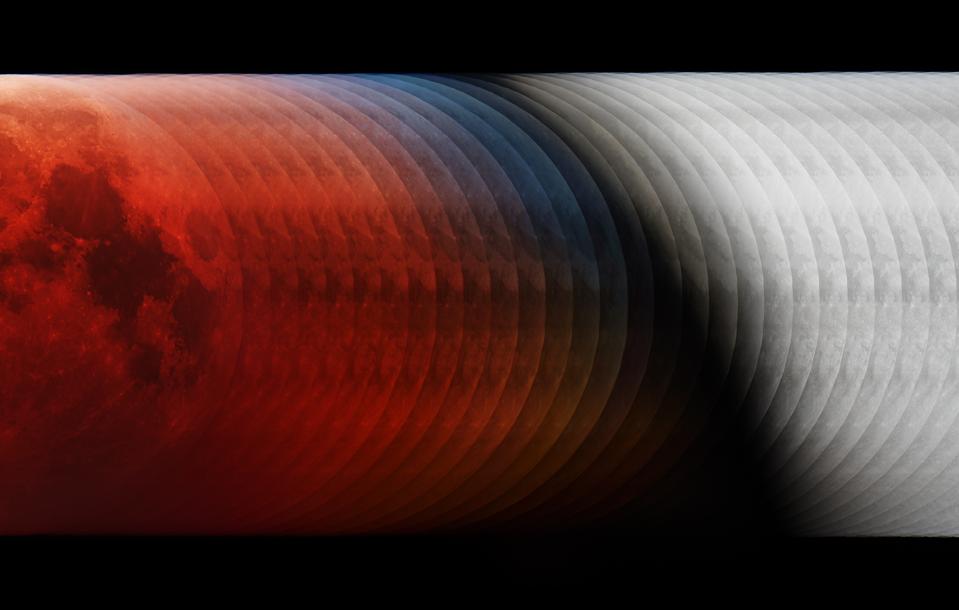 Into the Shadow, winner of the Insight Investment Astronomy Photographer of the Year 2019 … [+] competition organised by the Royal Observatory Greenwich in London.

Hungarian photographer László Francsics won September’s Insight Investment Astronomy Photographer of the Year 2019 competition organised by the Royal Observatory Greenwich in London with his image “Into the Shadow.” Taken in Budapest, Hungary, the photograph depicts a creative and artistic composition of the 35 phases of the total lunar eclipse that occurred on January 21, 2019 also called the “Super Blue Blood Moon.” 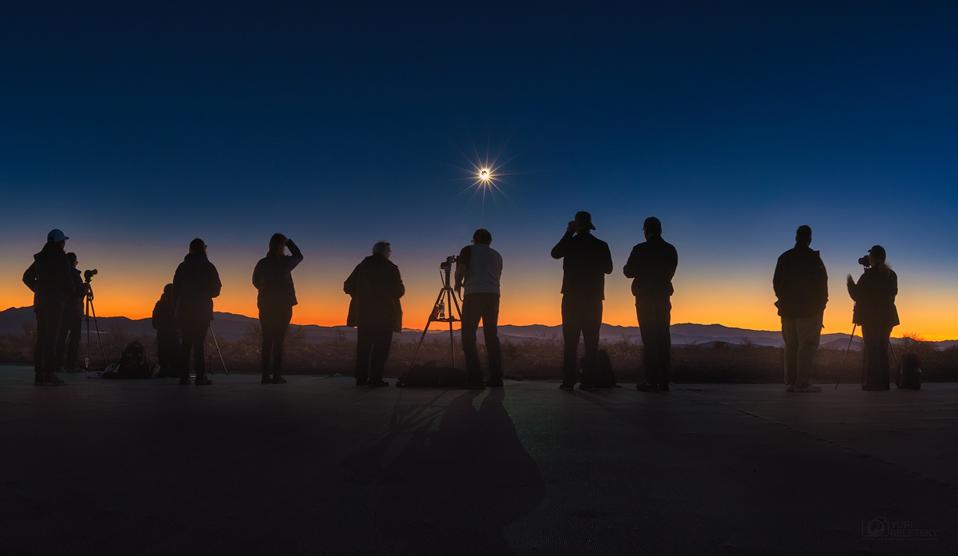 On July 2 denizens of planet Earth could stand in the Moon’s dark umbral shadow during South … [+] America’s 2019 total solar eclipse. It first touched down in the Southern Pacific Ocean, east of New Zealand. Racing toward the east along a narrow track, the shadow of the Moon made landfall along the Chilean coast with the Sun low on the western horizon. Captured in the foreground here are long shadows still cast by direct sunlight though, in the final moments before totality began. While diffraction spikes are from the camera lens aperture, the almost totally eclipsed Sun briefly shone like a beautiful diamond ring in the clear, darkened sky.

Although many had stayed away because of the threat of cloud, July 2, 2019 saw crystal clear skies and an achingly beautiful total solar eclipse across northern Chile and Argentina (I was there myself to witness it). Winner of NASA’s Astronomy Picture of the Day, this image from Yuri Beletsky shows eclipse observers witnessing a diamond ring from the Carnegie Las Campanas Observatory, which by lucky chance happened to be within a narrow path of totality over Chile.

A new SPHERE/VLT image of Hygiea, which could be the Solar System’s smallest dwarf planet yet.

Did the Chile’s Very Large Telescope reveal a new planet? A study of Hygiea—an object in the main asteroid belt—suggested it could be the solar system’s smallest dwarf planet yet. It already met three of the four requirements to be classified as a dwarf planet: it orbits around the Sun, it is not a moon and, unlike a planet, it has not cleared the neighbourhood around its orbit. The VLT found that it also met the fourth requirement; that it has enough mass that its own gravity pulls it into a roughly spherical shape. 2019 also saw the confirmation of Hippocamp, a seventh inner moon of Neptune. 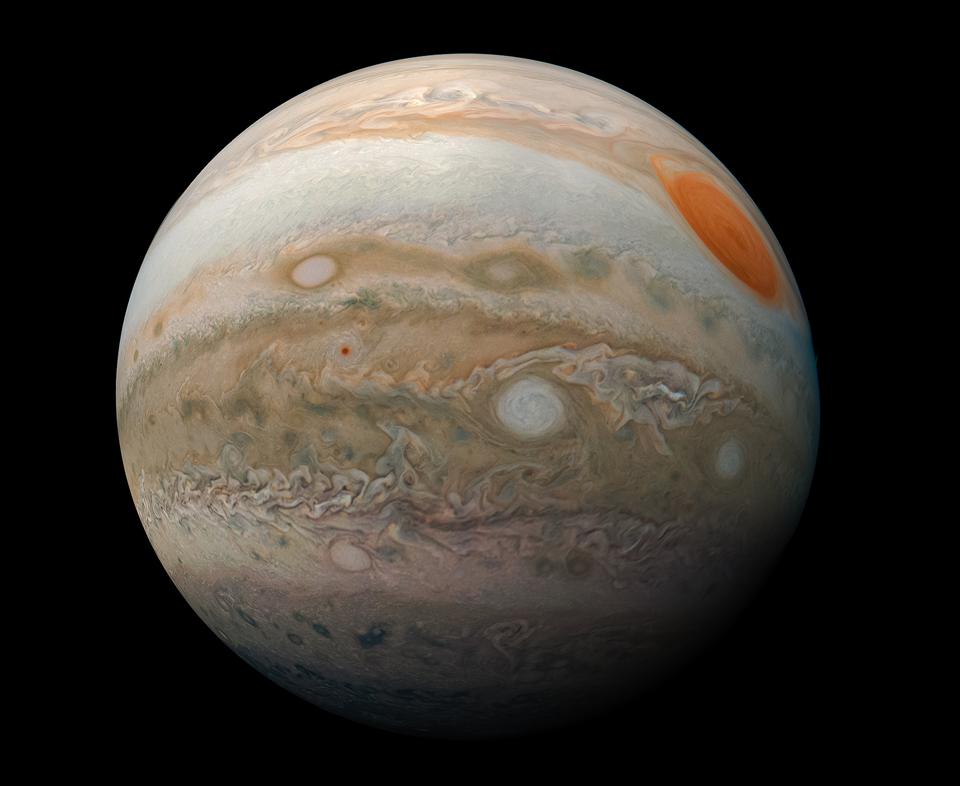 This striking view of Jupiter’s Great Red Spot and turbulent southern hemisphere was captured by … [+] NASA’s Juno spacecraft as it performed a close pass of the gas giant planet.

NASA’s Juno spacecraft at Jupiter has been doing some awesome work. It took three images used to produce this color-enhanced view on February 12, 2019, which were turned into this sublime image by citizen scientist Kevin M. Gill, who has consistently produced some incredible images from Juno’s raw data. 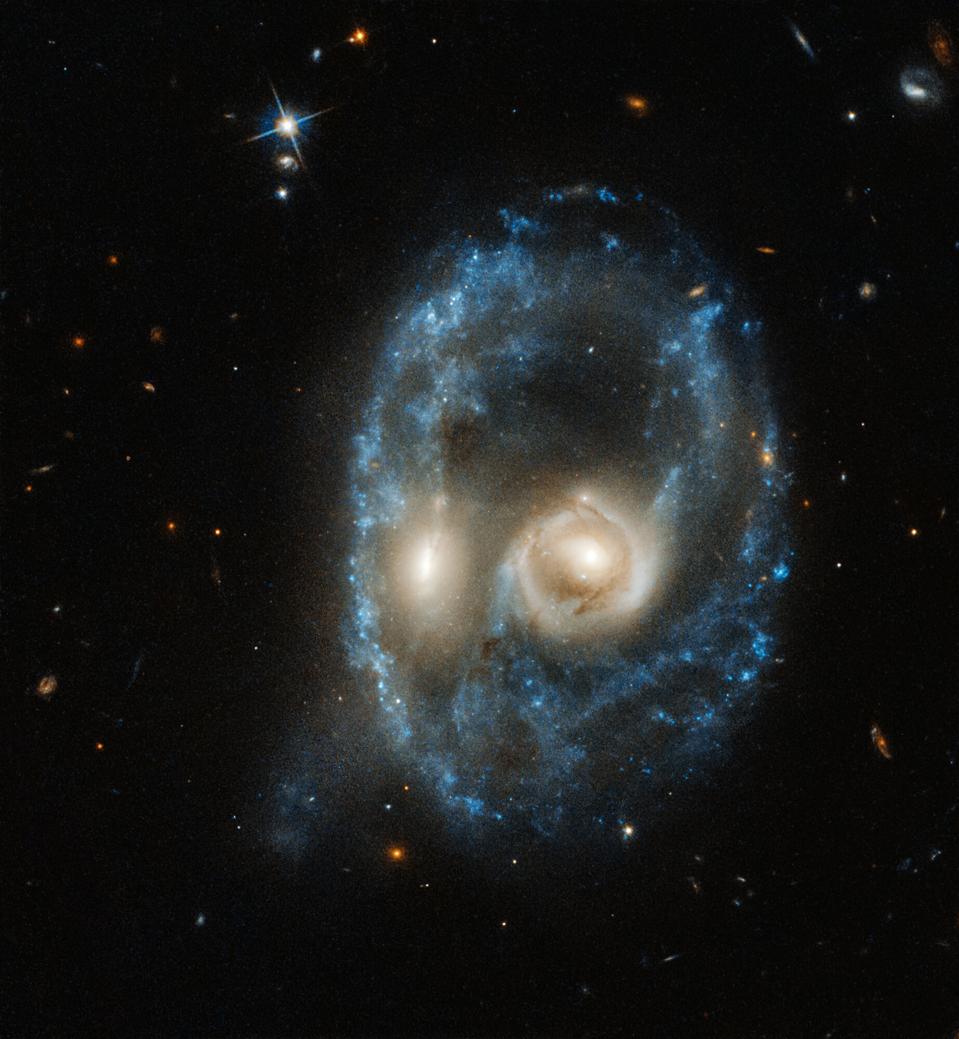 This new image from the NASA/ESA Hubble Space Telescope captures two galaxies of equal size in a … [+] collision that appears to resemble a ghostly face. This observation was made on 19 June 2019 in visible light by the telescopeâs Advanced Camera for Surveys. Residing 704 million light-years from Earth, this system is catalogued as Arp-Madore 2026-424 (AM 2026-424) in the Arp-Madore âCatalogue of Southern Peculiar Galaxies and Associationsâ.

Based on an observation made by the Hubble Space Telescope on June 19, 2019 in visible light, the image shows a couple of galaxies colliding about 704 million light-years from Earth. The two “eyes” are the bright cores of the two galaxies, one of which slammed into the other, while the outline of the face is a ring of young, hot blue stars. 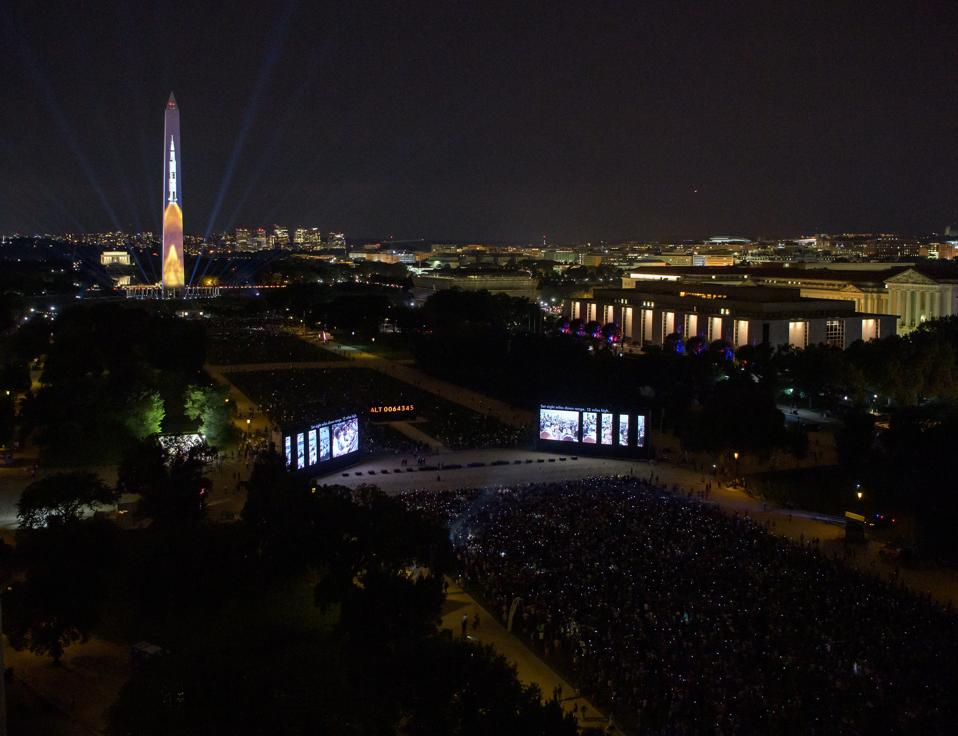 The 50 year anniversary of the Apollo 11 mission with NASA astronauts Neil Armstrong, Michael Collins, and Buzz Aldrin was celebrated in a 17-minute show, “Apollo 50: Go for the Moon,” by the Smithsonian’s National Air and Space Museum. It combined full-motion projection-mapping artwork on the Washington Monument and archival footage to recreate the launch of Apollo 11 and tell the story of the first moon landing. 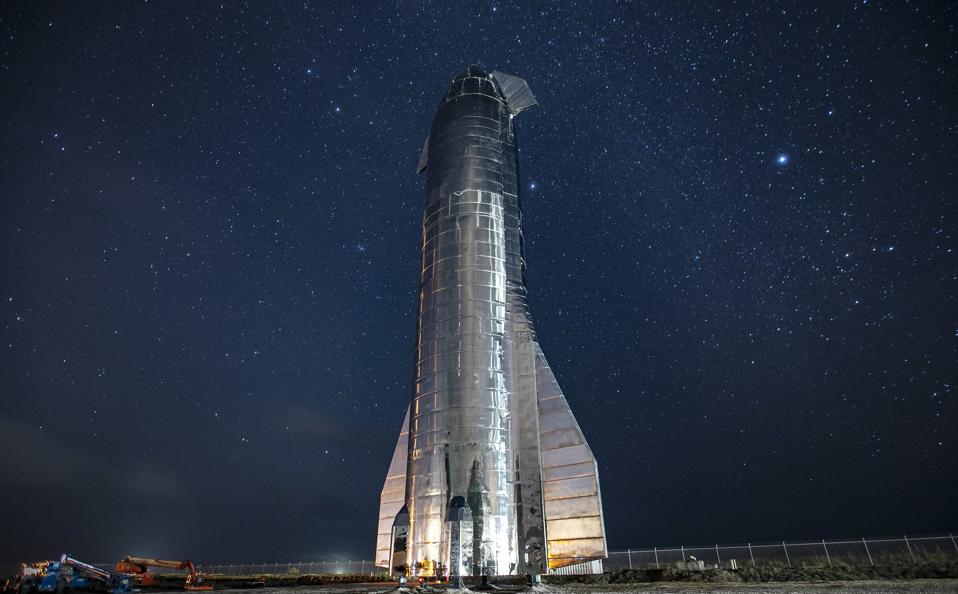 First unveiled in Texas during September was the SpaceX Starship, which could one day take 100 people to Mars. Is this 50m-tall hunk of stainless steel the most exciting things to happen in human spaceflight in recent decades? It will launch on a SpaceX Super Heavy rocket, and is destined for a short test flight followed by a go for orbit in 2020 … though it did blow its top in late November. 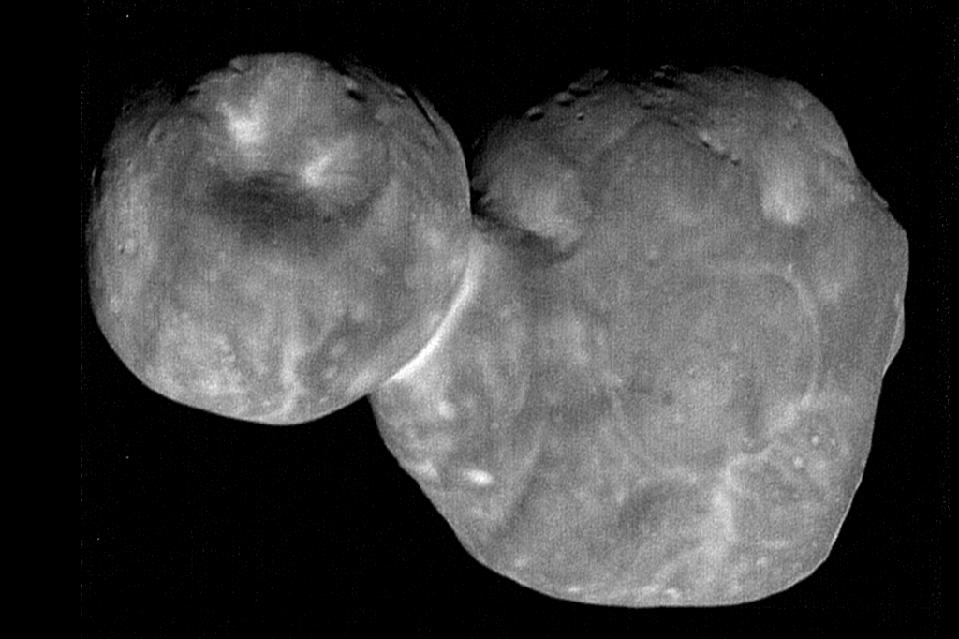 The most detailed images of Ultima Thule — obtained just minutes before the spacecraft’s closest … [+] approach at 12:33 a.m. EST on Jan. 1 — have a resolution of about 110 feet (33 meters) per pixel.

NASA’s New Horizons spacecraft raced past the most distant object ever explored, a Kuiper Belt object nicknamed Ultima Thule about four billion miles from Earth. Its appearance, unlike anything astronomers had seen before, illuminates the processes that built the planets four and a half billion years ago.

The latest view of Saturn from NASA’s Hubble Space Telescope captures exquisite details of the ring … [+] system — which looks like a phonograph record with grooves that represent detailed structure within the rings — and atmospheric details that once could only be captured by spacecraft visiting the distant world. Hubble’s Wide Field Camera 3 observed Saturn on June 20, 2019, as the planet made its closest approach to Earth, at about 845 million miles away. This image is the second in a yearly series of snapshots taken as part of the Outer Planets Atmospheres Legacy (OPAL) project. OPAL is helping scientists understand the atmospheric dynamics and evolution of our solar system’s gas giant planets. In Saturn’s case, astronomers will be able to track shifting weather patterns and other changes to identify trends.

The Hubble Space Telescope once again proved that Saturn is by far the solar system’s most photogenic planet when it photographed the gas giant as it neared “opposition”. Its magnificent ring system was near its maximum tilt toward Earth. 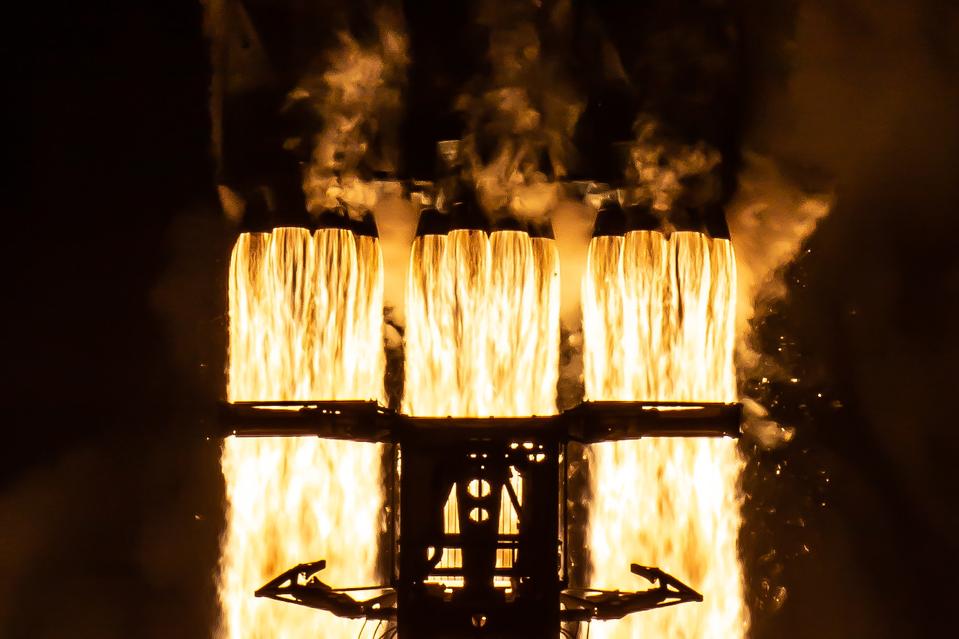 SpaceX launched its Falcon Heavy rocket for the third time, this time at night, from Launch Complex 39A at NASA’s Kennedy Space Center in Cape Canaveral, Florida. Its client was the US Air Force, whose Space Test Program-2 (STP-2) contained a bunch of payloads. More importantly, it made the Falcon Heavy fit for future national security missions. 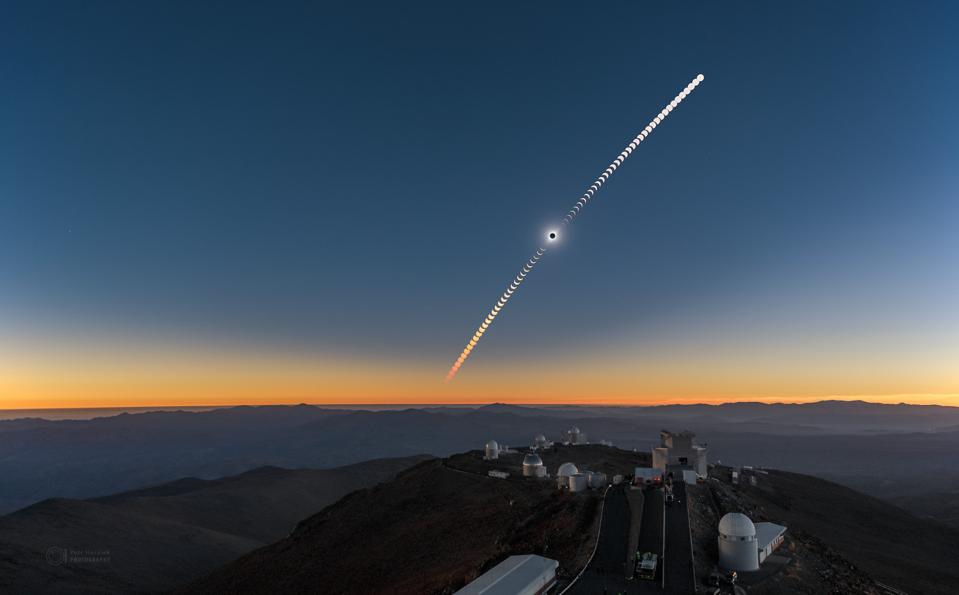 Recorded at regular intervals before and after the total eclipse phase, the frames in this composite … [+] sequence include the moment the Moon’s dark shadow fell across some of planet Earth’s advanced large telescopes. The dreamlike view looks west toward the setting Sun and the approaching Moon shadow. In fact La Silla was a little north of the shadow track’s center line, so the region’s stunning, clear skies are slightly brighter to the north (right) in the scene.

Another winner of NASA’s Astronomy Picture of the Day, this image by the European Southern Observatory’s photo ambassador Petr Horále shows a time-lapse of the total solar eclipse on July 2, 2019 from the ESO’s La Silla Observatory in Chile. “Totality” occurs on average at any specific location every 360 years. 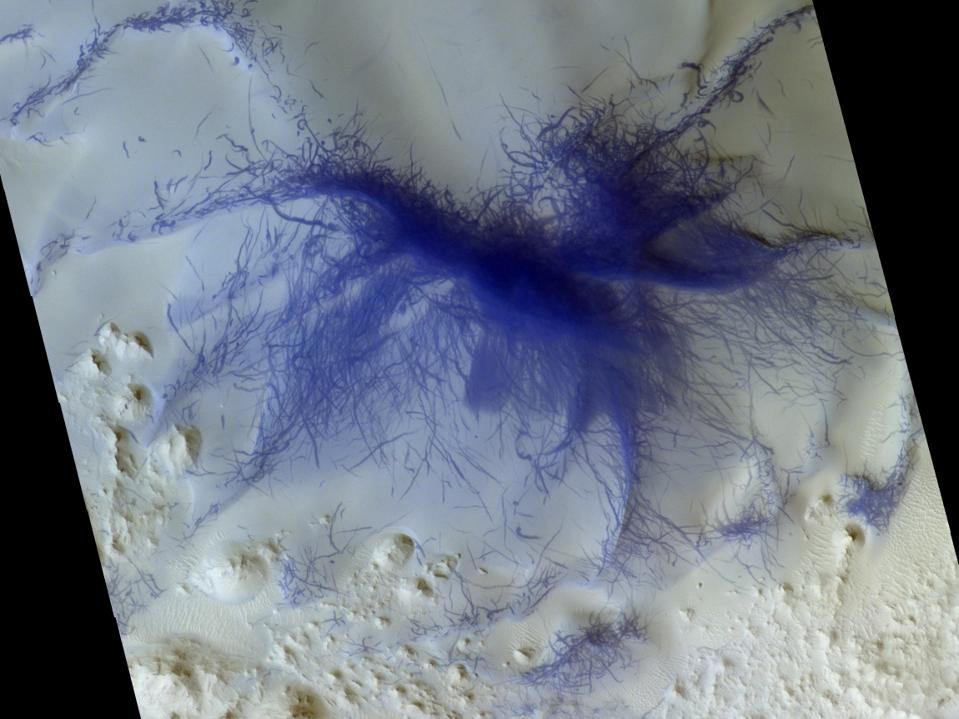 This remarkable image of Mars was taken in the Terra Sabaea region of Mars, west of Augakuh Vallis, … [+] by the Colour and Stereo Surface Imaging System (CaSSIS) onboard the ESA-Roscosmos ExoMars Trace Gas Orbiter.

Here’s Mars as you’ve never seen it before, with dust devils having churned up the surface material, exposing fresher material below. The reason why the streaks are so concentrated on the ridges is not known. 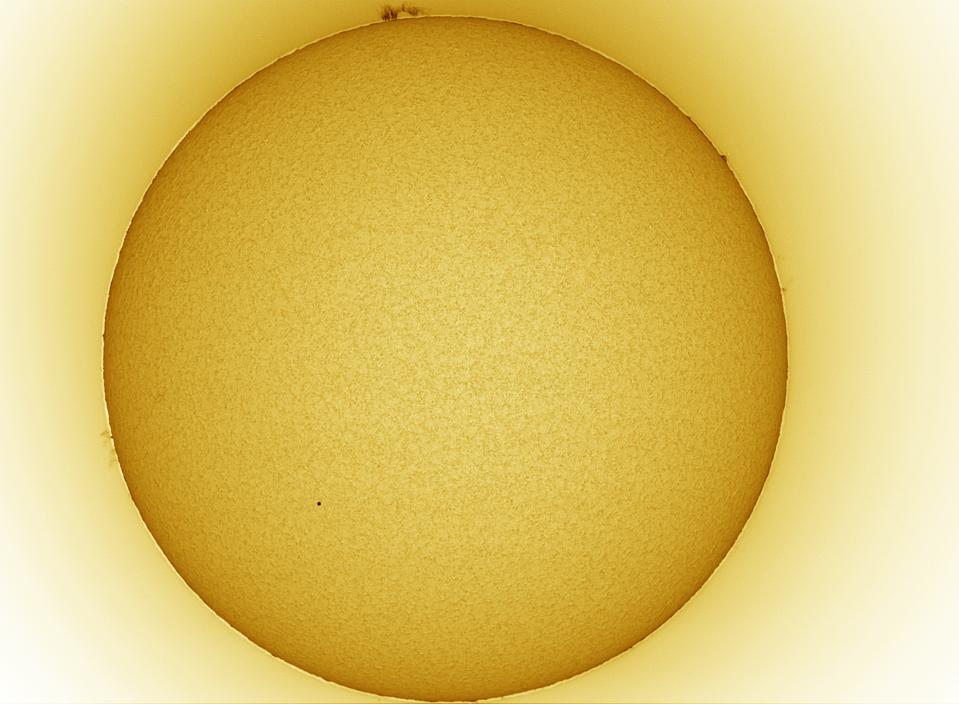 A spectacular image of the 2019 transit of Mercury taken from North Carolina by Zack Stockbridge … [+] using a Lunt Solar Systems H-alpha telescope. Stockbridge was part of the Citizen ToM Project that collected data to measure the distance from the Earth to the Sun.

That little black dot is Mercury. A rare transit of Mercury across the face of the Sun took place over five hours in November, the last time the tiny inner planet will make that visual journey until 2032. In fact, a transit of Mercury won’t be visible again from North America for a whopping 30 years.

How New York City’s Real Estate Market Is Different: Then, Now, And Always

Five Things I Wish I Knew When I...

Understanding What Really Matters To Help Make A...