Home Business The Celtics At The Break: Is This Their Best Case Scenario?
Business

The Celtics At The Break: Is This Their Best Case Scenario? 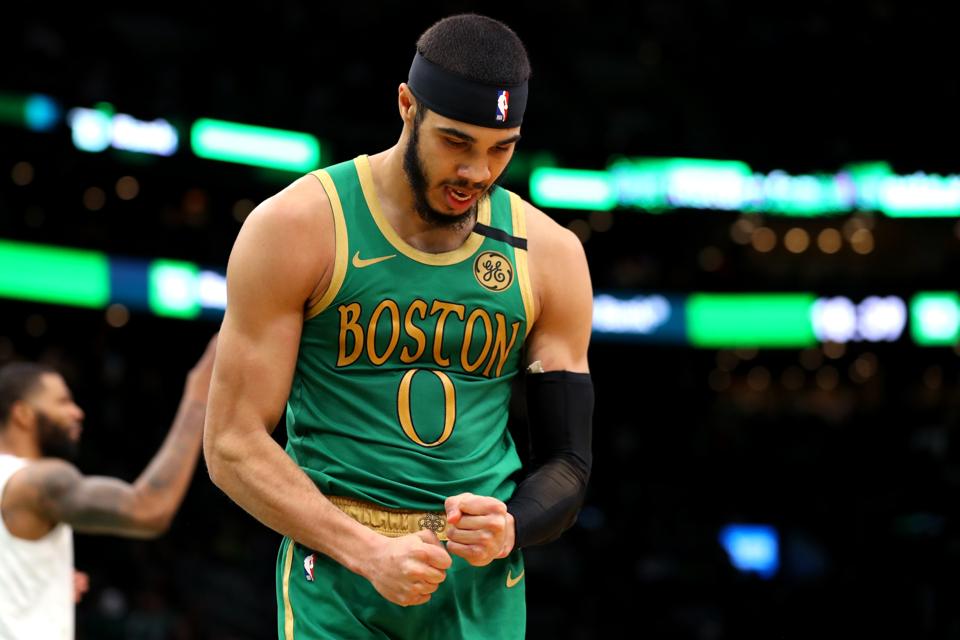 Jayson Tatum of the Boston Celtics celebrates during the game against the LA Clippers at TD Garden … [+] on February 13, 2020 in Boston, Massachusetts. The Celtics defeated the Clippers in double overtime 141-133. (Photo by Maddie Meyer/Getty Images)

Yes, of course, the All-Star break takes place well after the true midpoint of the NBA regular season, making it a relatively arbitrary point to stop and reflect. Yet, the way the schedule is set up, it’s really the only time we have to take stock. The Boston Celtics found a way to head into All-Star Weekend on a high note, improving their record to 38-16 record following a double-overtime victory over the Los Angeles Clippers, one of a handful of teams with a legitimate shot at making the NBA Finals. Plenty has gone right for the Celtics during the first few months of the 2019-20 season. In fact, they could be enjoying the best-case scenario they imagined during the offseason.

Nothing felt “best case” during the lead up to free agency last summer. It was quite clear that point guard Kyrie Irving had no desire to return to Boston, Anthony Davis had no desire to be traded to Boston and Al Horford had no desire to turn down the four-year, $97 million deal that Philadelphia 76ers were offering him to leave Boston. It could have been an absolute disaster had Kemba Walker not been desperately looking to leave the Charlotte Hornets for a team in a better position to win.

When Walker signed a four year, $140 million sign-and-trade deal in the summer it didn’t just save the precious egos of Celtics fans—here was an All-Star caliber player who was itching to play in Boston—it also ensured that the team would stay in playoff contention. The hope was that Walker would be able to give the team something approximating Irving’s production while potentially ending up being a better fit in the system. He ended up being a perfect fit in the system, equally willing to share the ball with his teammates as he is to take games over when they need someone to step up. There’s a reason he was voted as an All-Star started in the Eastern Conference.

It’s hard to say that Enes Kanter has really replaced all that Horford brought in the team, but it’s obvious from his two-year, $10 million offer that he wasn’t really brought in to play the same role. With Daniel Theis emerging as head coach Brad Stevens’s typical starting big man, Kanter has found his niche as their best offensive threat off the bench while continuing to be, as advertised, a rebound-grabbing machine. It was hoped that Robert Williams was on track to be part of the solution at center, but a hip-injury has kept him out of the mix these last two months.

Injuries, in fact, have been the main problem for this team (or at least their main problem that doesn’t involve Giannis Antetokounmpo). The team’s best five players have only been all available for a handful of games this season. Most prominently, Gordon Hayward suffered yet another serious injury, this time a fractured hand that kept him out a month right when he was piecing together his best stretch in a Celtics uniform. We still don’t know what this team will look like when Walker, Hayward, Marcus Smart, Jaylen Brown and Jayson Tatum are fully healthy and playing without minutes restrictions for an extended period. Heck, it might end up that they have similar troubles sharing the ball as they did during the lowest lows of the Kyrie Era.

It’s difficult to picture that, and a big reason why is because Brown and Tatum are not the same players they were this time last season. When looking at the team during the offseason the idea was that the Celtics would only really go as far as Brown and Tatum’s mutual development would take them. The Celtics made it clear that they believed this could be far indeed when they made the then-controversial move to hand Brown a rare rookie contract extension, one which could end up being worth as much as $115 million.

Well, Brown so far has made the contract extension look like a no-brainer, even if he was unjustly looked over by the All-Star voters this time around. Unfortunately for him, his teammate Tatum probably blocked his chances by putting together a breakthrough year at the exact same time. Heck, Walker gave Tatum all the credit for last night’s win over the Clippers, saying “he was the best player on the court tonight.” At this point, it would be shocking if the Celtics don’t try to get Tatum to sign a deal similar to the one Brown eventually agreed to. He might be able to hold out for more, however.

Ultimately, the Celtics’ season will be judged by how they fare in the postseason—a first round exit, at this point, would feel disastrous—but it’s difficult to have hoped for the team to be in a better spot at this All-Star break. Walker and Kanter have given the team exactly what they expected when they made their deals in free agency, Hayward is finally contributing and Smart has firmly established himself as the key to their defense. None of this, however, has been quite as encouraging as seeing Brown and Tatum blossom into stars. The Celtics may not quite be Finals contenders yet (although some would disagree) but it feels like they’re much closer than they have any right to be thanks to them.

Why TheSkimm’s Foray Into Commerce This Holiday Season...

See Anything Similar In Those Super Bowl LIV...