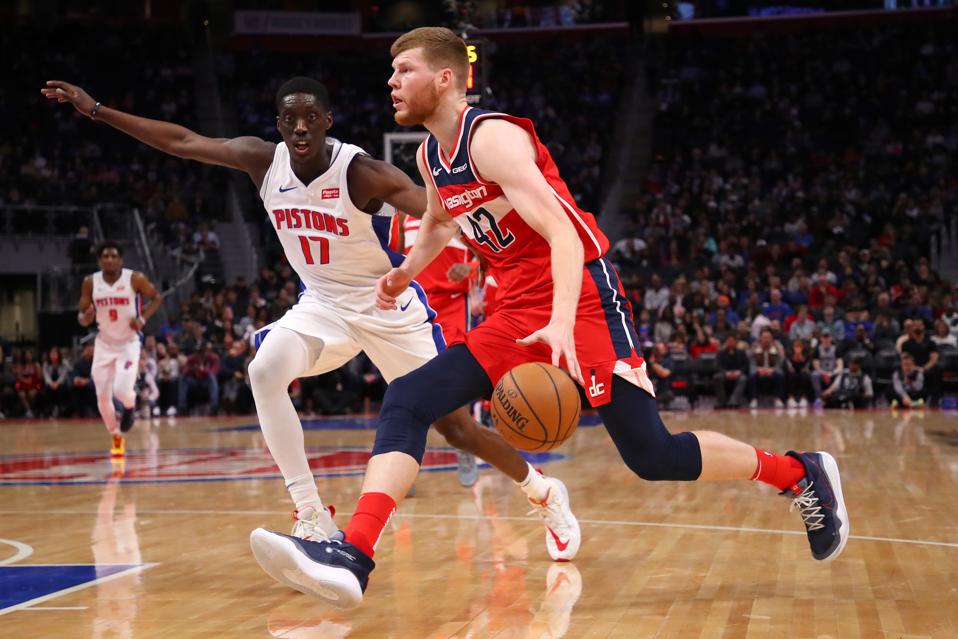 DETROIT, MICHIGAN – DECEMBER 16: Davis Bertans #42 of the Washington Wizards drives around Tony … [+] Snell #17 of the Detroit Pistons during the first half at Little Caesars Arena on December 16, 2019 in Detroit, Michigan. NOTE TO USER: User expressly acknowledges and agrees that, by downloading and or using this photograph, User is consenting to the terms and conditions of the Getty Images License Agreement. (Photo by Gregory Shamus/Getty Images)

After shoring up their depth this past summer, the Detroit Pistons felt good about a few things. First, they were definitely better than last season if they could stay healthy. Second, even if they couldn’t stay healthy, there are plenty of teams who are worse, and picking on them should be enough to at least get them another four-game date with the Milwaukee Bucks in the playoffs.

We’ve clearly seen that staying healthy isn’t in the cards for the Pistons. Reggie Jackson has missed all but the first two games of the year, and continues to be on an amorphous timetable of re-evaluation. Blake Griffin, whose left knee was surgically repaired in the offseason after playing with an injury which “can’t get any worse” from continuing to play, has missed the last game and a half with soreness in that same knee.

So if the first element is out of play and we can forget about good health luck, surely the rest of this roster can take care of the second part of the equation. After all, there are some really bad teams in the NBA, some via intention and some through utter incompetence, so staying afloat through the year by stomping on the league’s lesser-than squads shouldn’t be too hard.

Nothing is as easy as it seems for the Detroit Pistons. Once upon a time, the Going To Work Pistons lived by the mantra of “If it ain’t rough, it ain’t right”. It’s an adventurous way to live, but those teams were good enough to get away with it.

Following Monday’s 133-119 loss to the Washington Wizards, the Pistons are now 0-7 so far this season against the Wizards, Charlotte Hornets and Chicago Bulls. These three teams combine for a 29-52 record, good for a winning percentage of 35.8%.

The Wizards have the worst defense in the NBA by almost two whole points, giving up 116.6 points per 100 possessions. They are without John Wall, one of the best guards in the NBA. And they are 2-0 against the Pistons with a total victory margin of 30 points.

The Chicago Bulls are a virtual circus on wheels. A team with playoff aspirations coming into the season, head coach Jim Boylen has shown himself to be in way over his head and his roster seems to have tuned him out on the way to a 10-18 start. The Bulls are 2-0 against the Pistons with a total victory margin of 22 points.

The Charlotte Hornets have the sixth-worst net rating in the NBA at -6.7. They have the seventh-worst defense in the league, and the eighth-worst offense. They have some fun young players like Devonte’ Graham, but they would have been huge underdogs to sweep any season series this year. They’ve done it to the Pistons already, going 3-0 against them with a total victory margin of seven points.

The Pistons have stolen a couple wins against good teams. They won on the road against a very good team in the Houston Rockets on Saturday, and they won three of their four meetings with the Indiana Pacers.

But their record against bad teams is what will doom them. Aside from their record against this holy trinity of horrors, the Detroit Pistons have a close win against a bad and battered New Orleans Pelicans’ squad and are 1-1 against the Atlanta Hawks (who are battling the Pelicans and Golden State Warriors for the distinction of worst record in the NBA).

They also have blowout wins against the Cleveland Cavaliers and the San Antonio Spurs, two teams who should now see those defeats to the Pistons as glaring blemishes.

Of course, in order to classify yourself as a team that can beat bad teams, and for that to mean anything, you have to actually not be one of the bad teams yourself.

Through the first third of the NBA season, the Detroit Pistons are indeed one of those bad teams.

What Happens Now For Athletes Still Attempting To...

Coronavirus Is A Massive Challenge For World Leaders....

Pier 1 Is Officially For Sale After Filing...