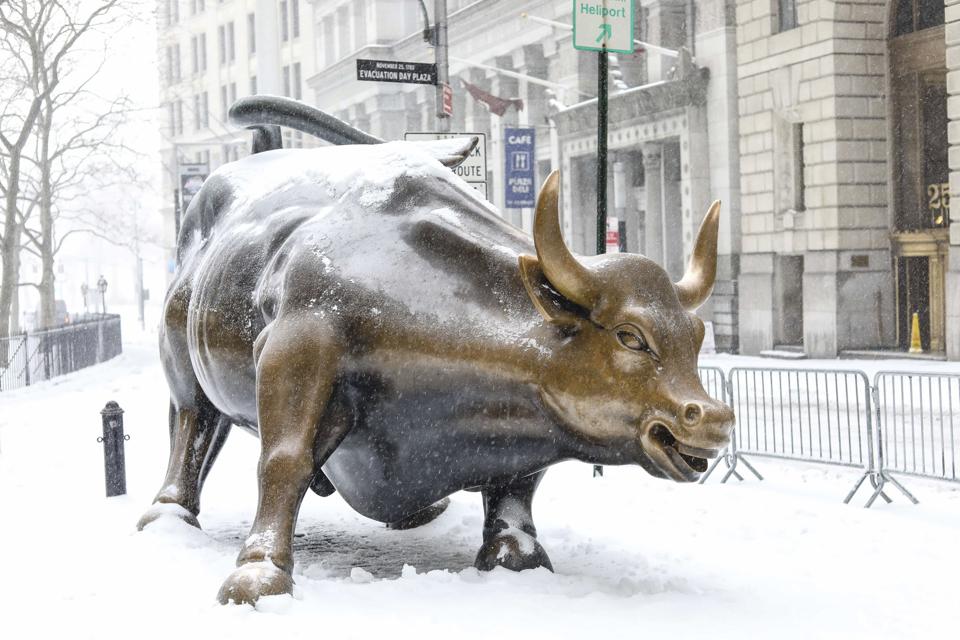 2019 was a very good year for the stock market with the Dow 30 Industrials increasing 22.3%, the S&P 500 up 28.9% and the NASDAQ 35.2%. As we enter 2020 there is increased optimism about the markets (record new highs tend to reinforce this feeling) especially since the Fed reversed itself in 2019 and has become accommodative along with Trump’s trade wars not escalating.

One of the questions as we enter a new decade is will the recent strength of the markets continue in 2020 or will there at least be a pause.

At the start of 2018 the markets rose in January as the S&P 500 spiked 7.4% on the back of President Trump’s tax cut. However, the market was overbought entering the new year with the S&P 500’s Relative Strength Index or RSI (first blue circle in the top part of the chart below) hovering around 60 and became very overbought on a short-term basis with the RSI climbing to almost 90. This led to a 10.2% correction in the span of less than two weeks in February.

The stock market getting ahead of itself can also be seen in how far it got above its moving averages. The blue line is the 50 day moving average and throughout 2017 the S&P 500 seemed to be either touching it or slightly above. In January 2018 the Index shot above it, which was another indication that it had gotten overbought. 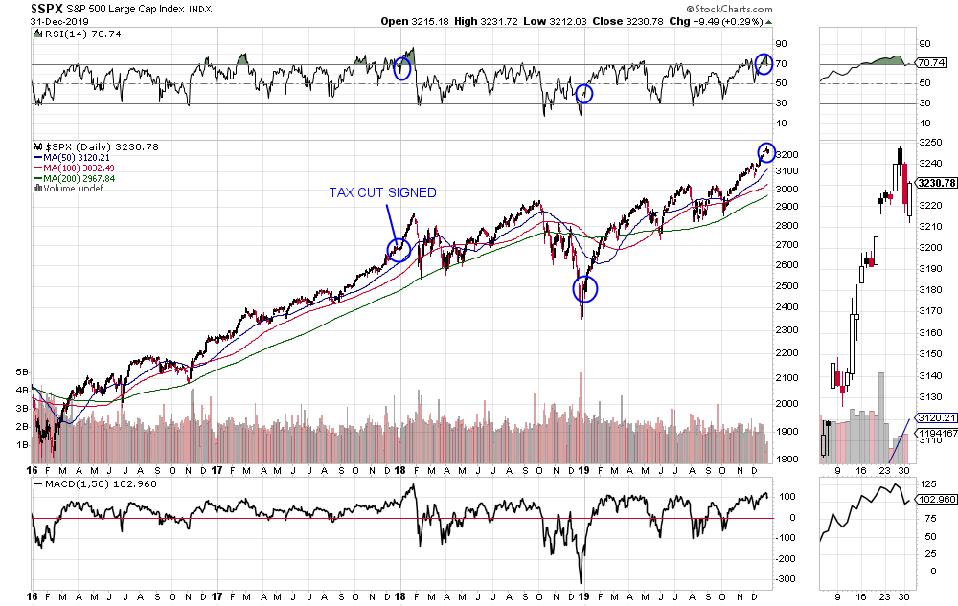 The next chart from FactSet shows the S&P 500’s PE multiple on its forward earnings projection. At the end of 2017 it had moved above 18x and a fair amount above its 5-year average. This was another indication that the markets had gotten ahead of themselves and a pullback should not be a surprise. 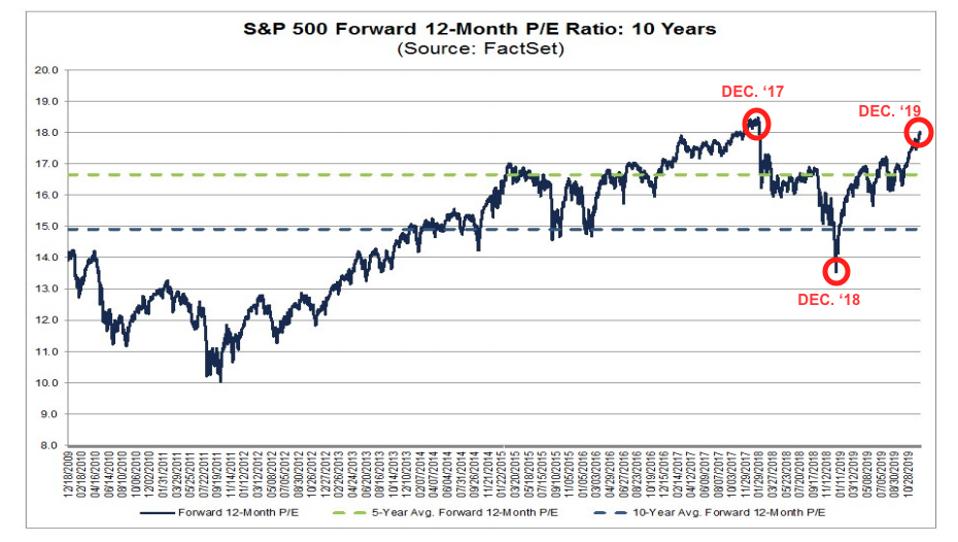 2019 began in the depth of despair

The feelings about the market in December 2019 were pretty much the exact opposite from a year earlier. While the Fed had raised interest rates multiple times in 2017 and started to shrink its balance sheet these had not impacted the stock markets.

However, additional rate hikes in 2018, with the outlook that more would come in 2019, combined with a continued decrease in the Fed’s balance sheet created fears at the end of 2018 that a recession could appear in 2019 or 2020. These cratered the markets in December 2018. The Dow fell almost 19%, the S&P 500 was down just under 20% and the NASDAQ entered bear territory falling 23%.

These created a very oversold position in December with the S&P 500’s RSI falling below 20 and its value substantially below its moving averages. The downdraft also substantially decreased the Index’s PE multiple, falling below 14x. Note that if you want to get an image of what increasing interest rates can do to market valuations, the late 2018 timeframe gives a good indication of what can happen.

Fortunately for the markets these reversed themselves with recession fears ebbing and the Fed first pausing and then reversing course. These led to the S&P 500 rising almost 23% from the December low to mid-June. It has gone on to gain 28.9% for 2019 with it almost entirely driven by higher valuation metrics.

With the Fed on pause entering 2020, the juice it provided in 2019 probably won’t be repeated, especially in a Presidential election year. The S&P 500’s RSI is starting at an elevated level, similar to two years ago, and it is also trading a good amount above its moving averages. And while its PE multiple is not as high as it was two years ago, it is approaching the level it reached then.

One reason for choppy waters at the beginning of 2020 is that there has been a dearth of sellers not wanting to take profits in the latter part of 2019 and have to pay taxes in a few months. There may be some incremental sellers early in the year who want to take some profits.

Even Ed Yardeni from Yardeni Research has some concern about the markets moving higher too quickly. On CNBC he said that he has been worried about the rally for a couple of months and that  “I just don’t want too much of a good thing here. I’d like this bull market to continue at a leisurely pace, not in a melt-up fashion.” He would not be surprised to see a 10% to 20% pullback if the market rises too fast.

While this probably won’t come into play in the first few months of 2020, keep in mind that the yield curve did invert in 2019 and that there is a lag between that occurring and a recession starting. History from the last three recessions shows that one could start in 2020.