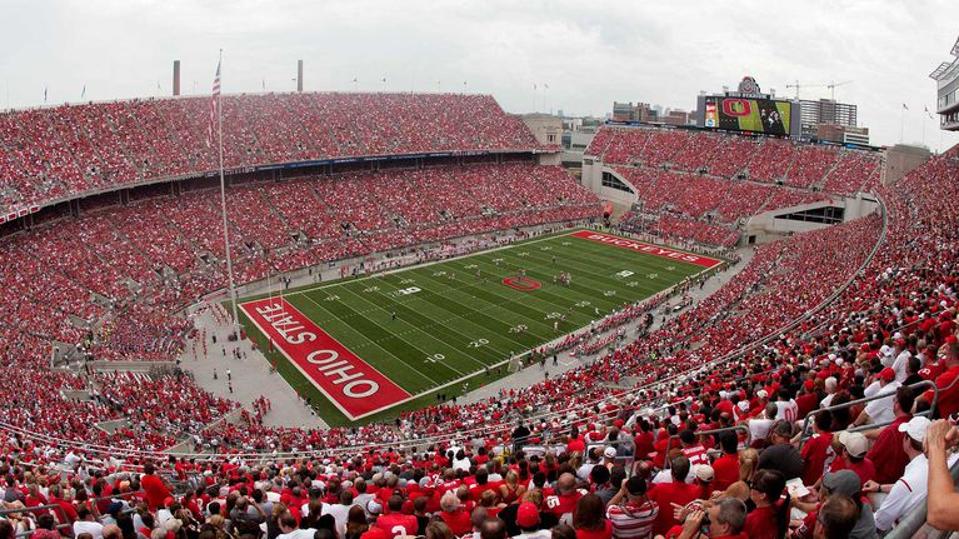 Ohio Stadium, home to the Ohio State Buckeyes college football powerhouse program, is one of several … [+] college football venues nationally which seats over 100,000 people. However, industry experts on the in-venue experience in college sports say that future venue renovations will focus more on maximizing the game-day experience, which may mean less emphasis on crowd size.

The business of intercollegiate athletics today reflects a dichotomy of celebration and conundrum.

Celebration in that millions watch college athletics every weekend during the academic year, and often, there is an air of romanticism around college sports which doesn’t quite exist in professional sports. It feels quaint, and for alums like myself who attended an on-campus football game for the first time recently (Charlotte…they didn’t field a football team during my college days), the game-day experience can be soaked in nostalgia. Bewilderment of how the campus has changed. Remembrance of friends made years earlier and various moments experienced from decades earlier. It can be emotionally transportive.

Conundrum in that it is extremely difficult to apply one set of rules across a set of conferences, schools, sports and athletes who vary drastically in popularity, tradition and revenue-generation.

During last week’s Learfield IMG College Intercollegiate Athletics Forum presented by Sports Business Journal in New York City, the two topics which dominated the conversation was (1) name, image, and likeness (NIL) and (2) attending to the mental well-being of student-athletes.

After addressing both NIL and mental health in college athletics in separate Forbes pieces just days ago (please review these articles for an in-depth discussion of those topics), this piece focuses on three other relevant issues today’s college sports leaders (e.g. conference commissioners, athletics directors) must confront as they try to balance their ever-increasing revenue needs with ensuring the well-being of student-athletes.

Read this in-depth discussion of contemporary views on NIL.

As in professional sports, fans are increasingly consuming content via streaming…and those in the college sports space are embracing this reality. Patrick Kraft, Temple’s athletics director, said he has come “full circle” on streaming…noting that ifthe production quality is good, then all is well. “People aren’t coming to games as much as they used to, so streaming provides added reach”, Kraft noted.

Big 12 Commissioner, Bob Bowlsby, echoed Kraft’s sentiments on how the production quality of streaming has made catering to new consumer trends more seamless, and that the “migration to mobile consumption” and a “shrinking cable environment” has led the conference to invest in more streamed content. “It is difficult to decipher between network production and streaming production”, Bowlsby explained. He went on to note 8 of the 10 schools in the conference produce their own content, and the cost-effectiveness of doing so is much more favorable today.

a) John Swofford and the ACC

Swofford said that as times changed and football became more financially important to the athletics department, expansion had to occur back in the early 2000s (and then again most recently with the addition of schools like Syracuse, Louisville, Pittsburgh).

According to Swofford, the reason the ACC waited until 2019 to launch the ACC Network was because the conference needed time to go through the expansion process referenced above, add those key markets to the overall footprint, and solidify their football presence. Now, with the “largest geographic footprint” among the Power 5 conferences, it made 2019 a more appropriate time to launch the network. “You only get to launch once”, Swofford said.

b) Greg Sankey and the SEC

Boasting the largest SEC football ratings in 30 years, Sankey pointed to the high-quality of games throughout the season which drove the spike in ratings.

This astounding ratings spike comes at a time when attendances at college football games have steadily declined for several years. Sankey said attendance declines “are not isolated to college sports” and is an “emerging phenomenon in sports and entertainment”. He also noted that such things like in-stadium alcohol sales and video board enhancements are all ways schools have tried to combat the attendance declines.

More broadly, the SEC conference is among the wealthiest in America. The conference reported just under $660 million in revenue for fiscal 2018, resulting in an average payout of $43.7 million to member schools earning a full share. The popularity of the SEC Network, launched in 2014 and in partnership with ESPN, is a big reason for this.

The Pac-12 has been leapfrogged financially by the other Power 5 conferences, and they are locked in their current media deal until 2024.

The Pac-12 model differs from both the ACC and SEC Networks in that they currently retain 100% control of production and distribution. ESPN had recently offered to partner with the conference, but as Scott said, “the board rejected the offer to maintain flexibility” as 2024 nears.

Scott was extremely upbeat about the conference’s and network’s financial future. “The value of premium college sports continues to increase at a significant rate. We are sitting on a lot of value.”

In an on-going battle to create FOMO (fear of missing out) as the at-home viewing experience becomes better than ever, schools must collaborate with architects and consultants to figure out the best way to create in-person game-day fan engagement. This is clearly a pain point at many schools, especially considering the attendance trends cited earlier. Subsequently, the focus on enhancing the in-venue experience is of immense importance.

In an afternoon session on Day 1 of the conference discussing “facilities of the future”, the session began by noting that over $1 billion nationally was spent on college sports facilities in 2019…a phenomenon which has happened for several years consecutively now for reasons tied to both student-athlete recruitment and boosting fan engagement in the game-day experience.

On the current state of college athletics facilities:

On various themes as well as facility design elements:

Look no further than the worlds of music, fashion, and esports to know that teenagers can be major social influencers. And, as a byproduct of that, can earn substantial income from their name, image, and likeness as young consumers choose to stream their content through various channels (Twitch being just one possible avenue).

Likewise, young athletes are now able to begin the process of building and promoting their personal brands much sooner than ever before thanks to the power of social media. Bronny James, the son of LeBron James, currently has 3.8 million followers on Instagram. Recent UCLA alum and star gymnast, Katelyn Ohashi, has 1 million followers.

On the first session of Day 2 at the conference, Jim Cavale (CEO of INFLCR) spoke of the importance tied to giving student-athletes easier and better access to content they are part of (be it photos or videos of them in action).

Certainly, such access makes life easier for student athletes trying to build a personal brand. However, Cavale argued that since many of the student-athlete’s social media pages draw more eyeballs than social media accounts tied to the athlete’s team or athletics department, allowing the students better access to their own content could boost the marketing value for the athletics department as a whole.

For example, as Cavale shared, the University of Oregon’s football team has 414,000 followers through its team’s social media accounts, while the student-athletes on the team have a cumulative 1.4 million in social media followers…or 3.4 times more followers.

Another example. Cavale said that 94% of the top basketball recruits in America are active on social media, and among these, 35% follow other athlete accounts while only 5% follow team accounts.

“Athletes have become channels, yet athletes can’t acquire their images”, Cavale asserted. He went on to say that giving student-athletes access to content has a major impact on the rate at which they post to social. Students are “85% more likely to post to social media if they have access” to their own content.

Celebration and conundrum…it’s the world of intercollegiate athletics which exists today.

And in 2020, the issues of NIL, mental health of student-athletes, media rights and distribution, in-venue experience, and student-athletes as brands/influencers will take center stage.

Shaping the very landscape and operations of the business of intercollegiate athletics as we know it.

Tech Entrepreneur Is Making The World Safe For Her Daughter

Forbes – How To Recruit, Upskill, And Advance:...