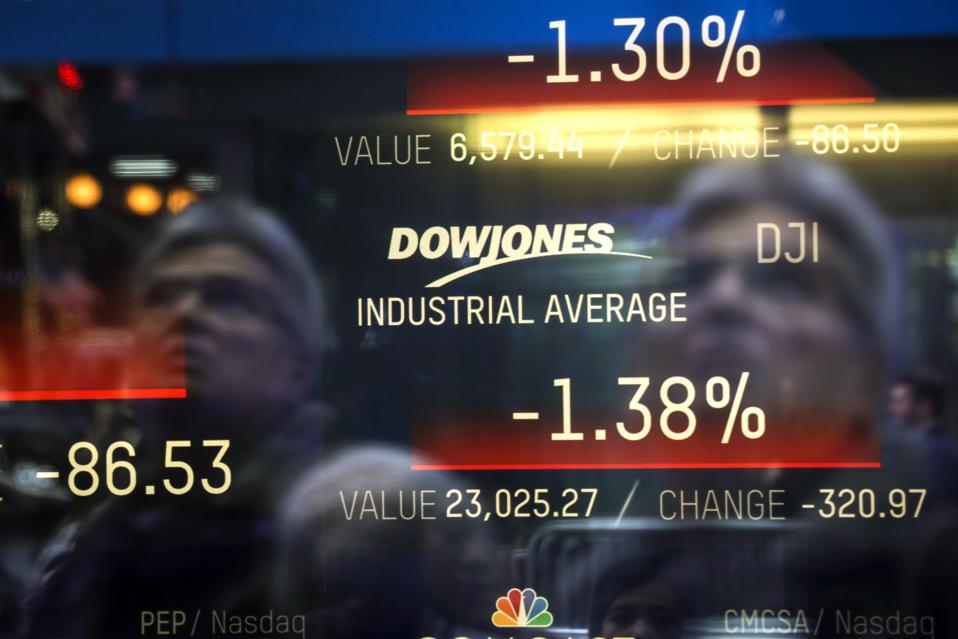 On January 3, 2019 the Dow Jones Industrial Average is displayed on a screen at the Nasdaq … [+] MarketSite in Times Square, in New York City. (Photo by Drew Angerer/Getty Images)

Since the Dow Industrials made a new closing high of 28,164 on November 27, I was interested to run my regular monthly starc band scan of the thirty Dow Industrial stocks on Black Friday (the last trading day of November). As a review, when a stock or ETF is close to the starc+ band, it is considered to be a high-risk buy, since its creator, the late Manning Stoller, estimated that 92% of the price activity should stay within these bands.

The most overbought stocks are also typically market leaders, so it is not surprising that Apple, Inc. (AAPL) is the most overbought, as it closed in November just 5% below its monthly starc+ band. 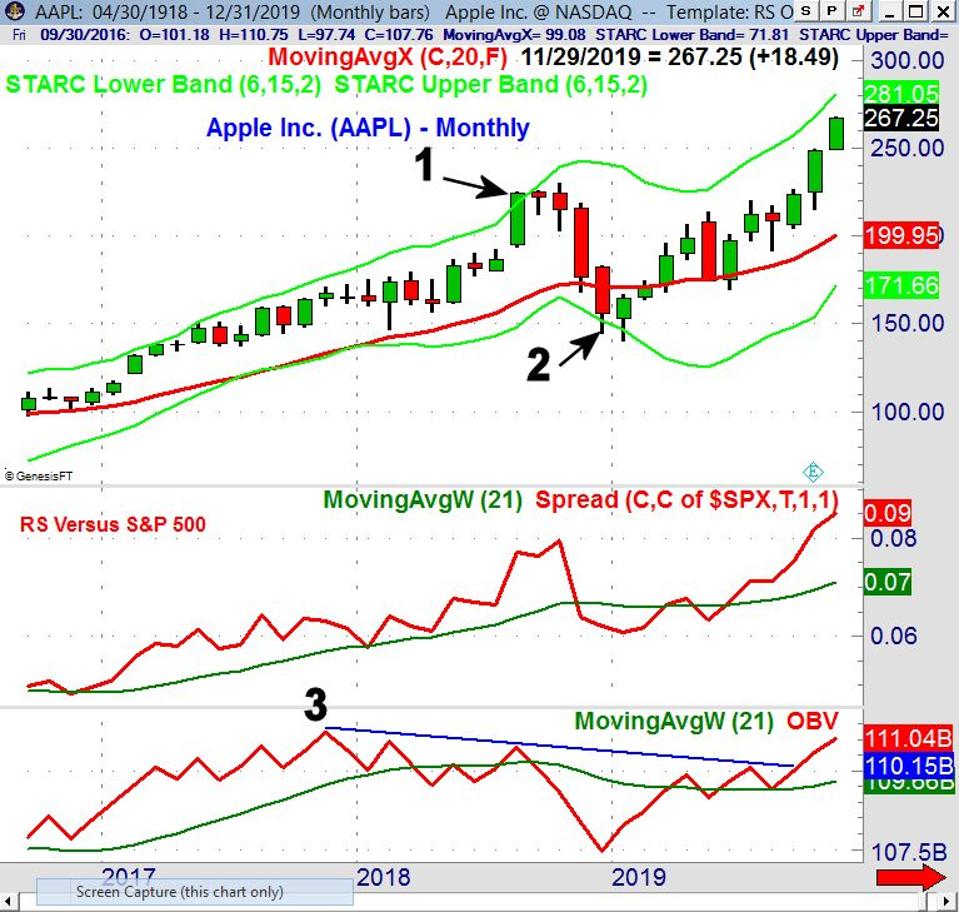 For December 2019, the starc+ band for AAPL is at $281.84. The monthly relative performance (RS) is rising sharply, and made a new all-time high in November. The On Balance Volume (OBV) failed to make a new high with prices in August 2018, forming a negative or bearish divergence (line 3) that has since served as resistance. This resistance was overcome in October 2019 and the OBV made a new high in November. 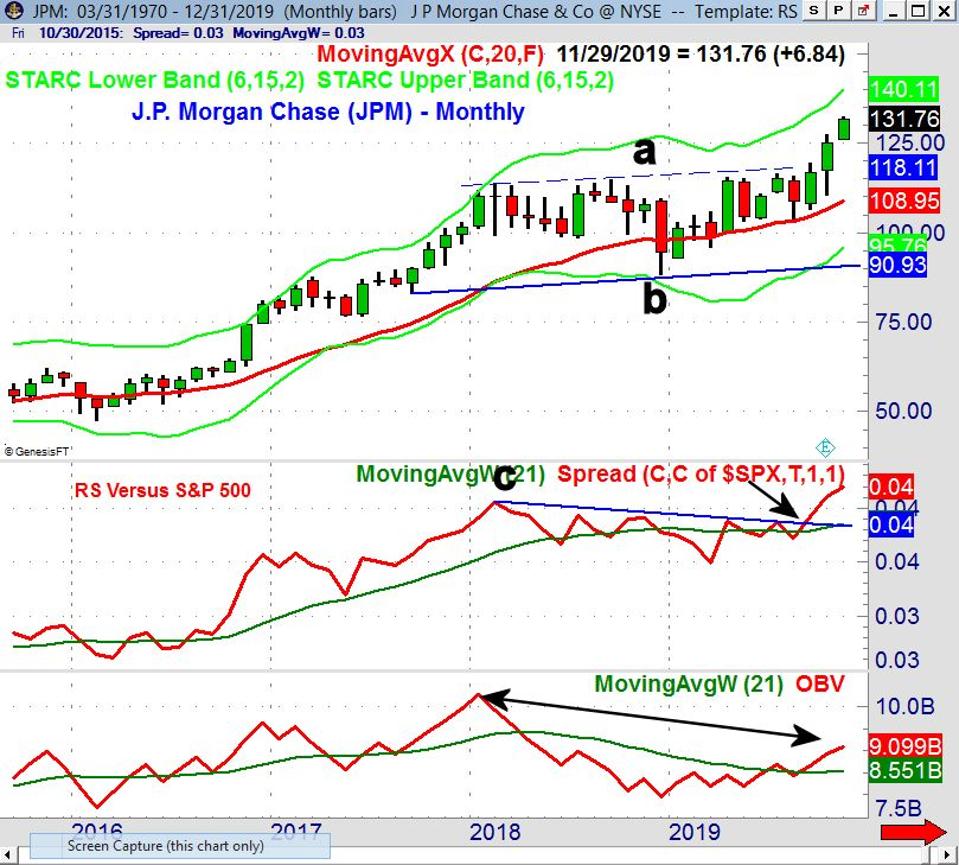 The second most overbought stock is J.P. Morgan Chase (JPM) which closed November at $131.65, 7% below its monthly starc+ band at $140. JPM formed a major trading range between September 2017 and September 2019 (lines a and b), which was overcome in October. The width of the trading range has upside targets in the $144-$146 area.

JPM’s monthly RS broke out above its resistance (line c) in September and led prices by one month. It looks strong and made another new high in November. The volume has not been supporting prices, with the lowest volume of the year in November. In fact, the volume in November was 26% below the October volume. The OBV is still well below the January 2018 high. 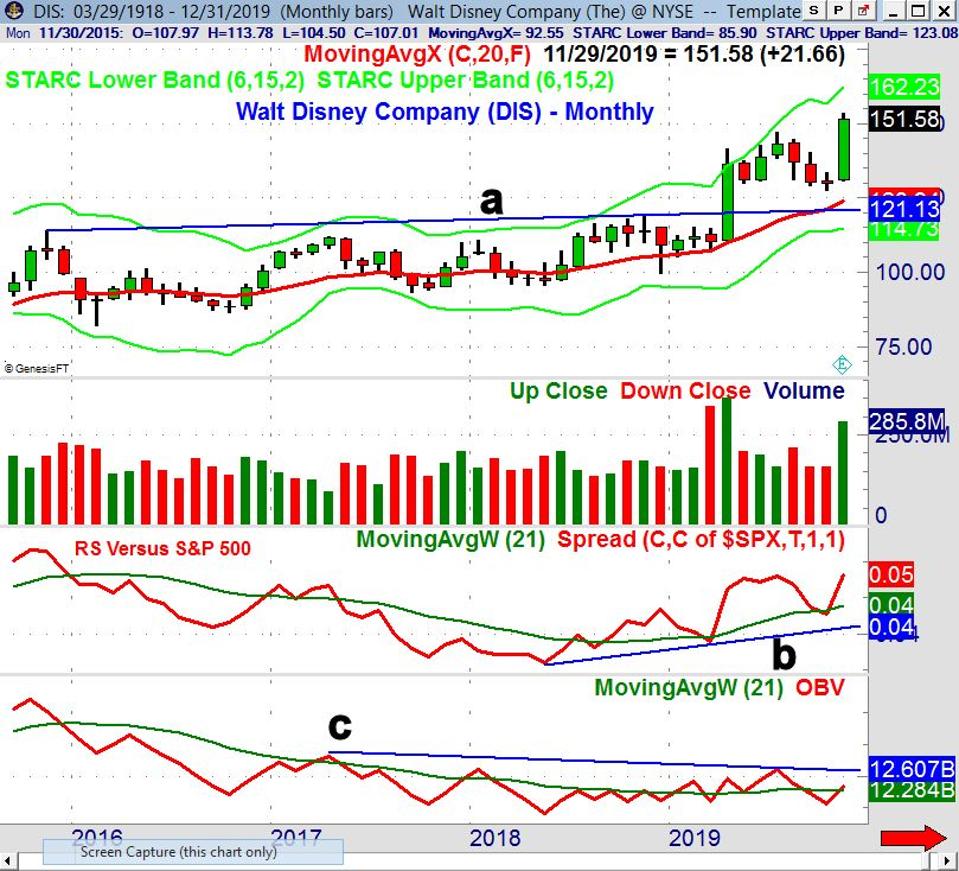 Walt Disney Company (DIS) had been consolidating since it moved sharply higher in April, when it completed a three year trading range by closing above its resistance (line a). DIS made a new high in November, closing at $151.58, which was 7% below the monthly starc+ band at $162.52. The November close was well above the October doji high of $133.48, and so it triggered a doji buy signal.

The RS dropped below its Weighted Moving Average (WMA) in October but held well above its support (line b) before turning sharply higher in November. The volume was the highest of the past seven months in November, but the OBV has only just moved slightly above its WMA. The OBV has not supported the price action, and is still below the two-year resistance (line c). 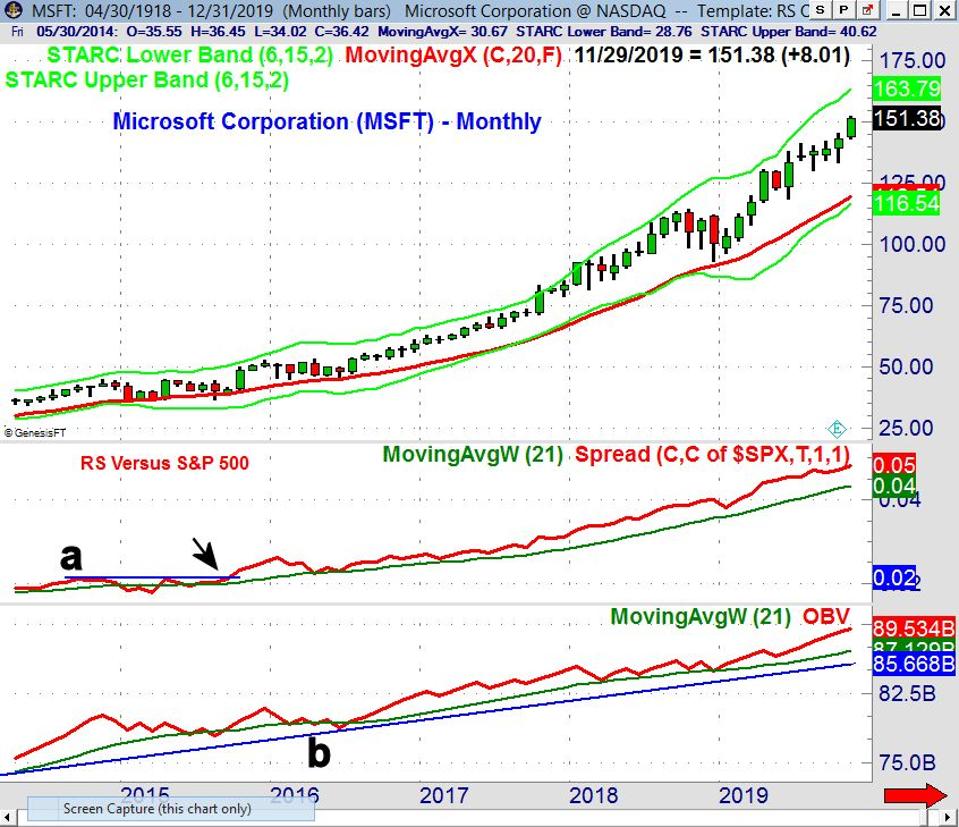 Microsoft Corporation (MSFT) moved out of its three-month trading range in September and accelerated to the upside in November, closing at $151.60. The close was 8% below its starc+ band. The long term chart shows that MSFT has had quite a run since 2015, when it closed December at $51.34.

The weekly RS completed its bottom in 2015, as it overcame its resistance (line a). It has been rising since then, indicating that MSFT was leading the S&P 500. The weekly OBV has been in a strong uptrend since the mid-2013 lows (line b). It has made significant new highs in each of the past six months.

The monthly outlook for all of the four most overbought Dow stocks is clearly positive, but the example of AAPL in August and September of 2018 demonstrates what can happen when stocks or ETFs move outside of their monthly starc bands. In the coming months, JPM and DIS look the most vulnerable to a correction, as their volume has not been supporting the price action.

If you are interested in following my style of analysis I hope you will consider the Viper ETF or Viper Hot Stocks reports. Specific recommendations are sent out twice each week and each report is only $34.95 per month.