Home Business The Good, Bad And Ugly From The Green Bay Packers’ Win Over The Washington Redskins
Business

The Good, Bad And Ugly From The Green Bay Packers’ Win Over The Washington Redskins 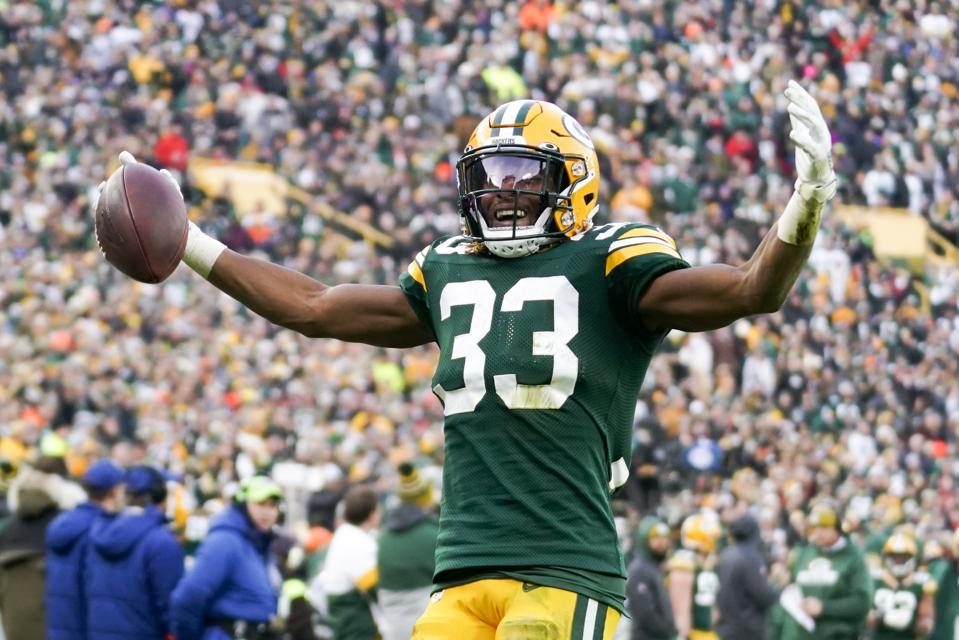 Green Bay running back Aaron Jones had 192 total yards and a touchdown in the Packers’ win over … [+] Washington Sunday.

There were no style points.

The Packers jumped to a 14-0 lead before the first quarter was over, but struggled the rest of the way.

“We’ll never apologize for winning,” Packers head coach Matt LaFleur said. “We’re always going to feel great about winning. But you always want to go out there and put your best performance out there. I think there was more out there today for us.”

The Packers improved to 10-3 overall and stayed one game ahead of Minnesota (9-4) in the NFC North. Green Bay also leapfrogged New Orleans for the No. 2 spot in the NFC.

Here’s the good, bad and ugly from Green Bay’s win over Washington.

PLAYOFF POSITIONING: As the Packers entered the final quarter of the season, they talked about the importance of earning a top-two seed, which would mean a first-round bye in the playoffs. When Green Bay won and San Francisco kicked a last-second field goal to defeat New Orleans, the Packers moved into the NFC’s No. 2 spot.

“I mean our destiny is in our hands I guess you could say,” Packers cornerback Tramon Williams said. “We just have to continue to win. It starts off with Chicago (next week). One game at a time.”

The Packers improved to 4-0 this season in games where Jones has 20 touches, or more.

“I think that’s a good amount,” Packers quarterback said of Jones’ touches. “Twenty to 25 is what we want to be. I would say he touched the ball on other drives as well where we didn’t score but, obviously, if he’s breaking off a big run or catch and run, you probably score on those drives.”

That meant the Packers needed 36 punt return yards in their final four games to avoid a new record for futility.

Well, new return man Tyler Ervin — who was signed Dec. 3 — took care of that. Ervin returned four punts for 51 yards, an average of 12.8 yards per attempt.

That was the most yards on punt returns in one game by a Packer since Trevor Davis recorded 63 yards at Cleveland on Dec. 10, 2017.

“I think it was decent,” Ervin said of his debut. “There’s always room for improvement. I’m going to go ahead and watch the film and see what I can get better at. I’m sure there’s plenty of other things to catch the ball cleaner.”

Green Bay’s consistent pressure was a big reason it held Haskins to 170 passing yards and a 74.6 quarterback rating.

“It felt good,” Clark said. “I’ve been pressuring the quarterback all year, so finally for the payoff, it’s cool. It came in bunches, so hopefully I finish off the season … they keep coming in bunches. Anytime you’re going against a young quarterback, we’ve got to get pressure on him, make him make some bad throws.”

IMPRESSIVE START: Green Bay’s Matt LaFleur became the first head coach in franchise history to win 10 games in his first season with the Packers. The previous high was nine victories by Mike Holmgren (1992) and Mike Sherman (2000).

The Redskins’ defensive line, which is the strength of its defense, got the better of Green Bay’s offensive line much of the game.

“I thought our D-line played hard, I thought they played really hard,” Redskins coach Bill Callahan said. “We got a lot of pressure on them (Green Bay), a lot of hits and sacks. All in all, it wasn’t enough. You have to give them (Green Bay) credit. They played a good enough game to beat us. We just didn’t make enough plays in the end.”

MISSING IN ACTION: Green Bay’s wide receivers were largely invisible throughout this contest.

Davante Adams (six targets, four catches), Allen Lazard (3-2) and Geronimo Allison (1-1) were the only wideouts to see a pass.

CAN’T CLOSE: Green Bay took a 14-0 lead after tight end Robert Tonyan caught a 12-yard touchdown pass with 34 seconds left in the first quarter. The Packers found the endzone on two of their first three possessions to take their quick lead.

“Well, it’s hard to win in this league,” Packers right tackle Bryan Bulaga said. “I can’t overstate that enough, but we need to clean things up and be better.

“I was saying, we left a lot of yards, a lot of points, made that thing a lot more difficult on ourselves than we should have. Obviously I’m happy we won, I’m not going to sit here and say ‘Give the win away.’ No, we want it. But we need to be better going into these next three weeks. These are big games and we need to improve and be cleaner against division opponents going forward.”

Back To The Chopping Block For Top Miners, BHP And Rio Tinto

Who Are Some Of The Pro Athletes Born...

If Governors And Legislators Aren’t Improving Their State...

Griezmann In For Frosty Reception During Fiery FC...