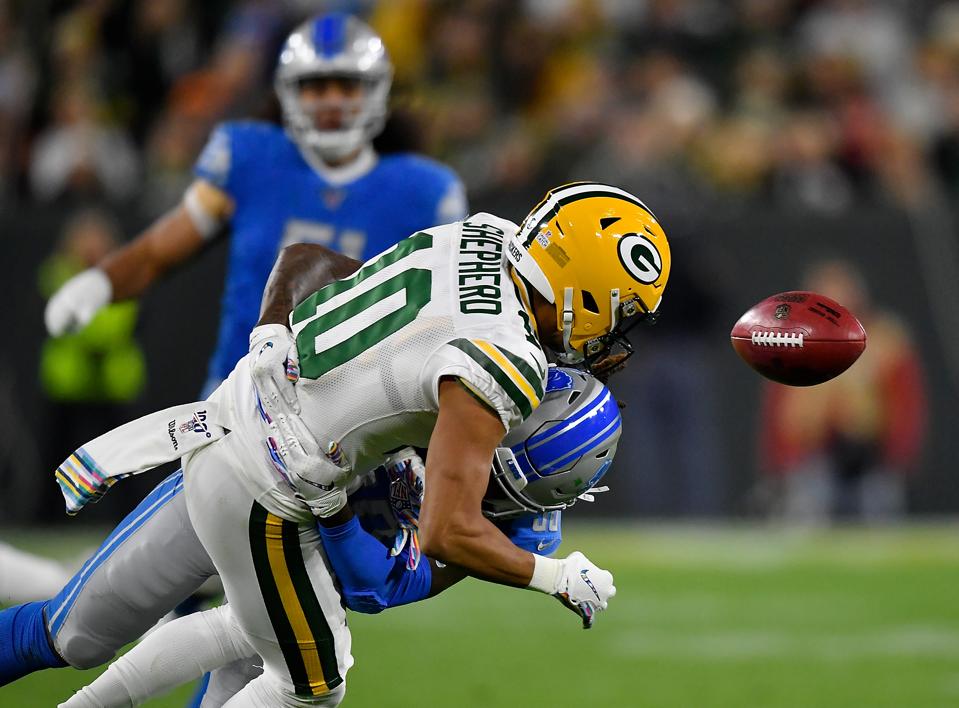 The Green Bay Packers are on pace to have the worst punt return units in NFL history.

He’s the latest candidate to try saving the Green Packers from setting an NFL record they want absolutely no part of.

That means the Packers need 36 punt return yards in the next four games to avoid a new record for futility.

“I’m just playing my game,” Ervin told reporters this week. “I try not to worry about too much other than that. Just go out there and have fun with my teammates and celebrate.”

There hasn’t been anything to celebrate when it comes to Green Bay’s punt return game this season.

The Packers have returned nine punts for minus-8 yards and fair caught 21 punts. Green Bay’s average of minus-0.9 yards is also on pace to shatter the lowest punt return average in a season of 1.3, which again was set by the 1965 Cardinals.

Trevor Davis, who handled the return duties until he was traded on Sept. 18, leads the Packers with 1 punt return yard on three attempts. Tremon Smith, who was released Monday, had zero return yards on four attempts.

Amazingly, the Packers’ longest return of the year is 3 yards. And Green Bay trails Washington — its opponent this week — by 98 yards for the 31st spot in the NFL in punt return yards.

“I don’t want to have that hanging on my head,” Packers special teams coach Shawn Mennenga said Thursday. “Honestly, we’re trying to lead the league in everything. Yeah, it does bother me. We’ve really put an emphasis on it.

Ervin, who was waived by Baltimore and Jacksonville this season, gets the next opportunity.

Ervin, who played collegiately at San Jose State, was a fourth round draft pick by Houston in 2016. Ervin played in 25 games for the Texans between 2016-’18 and six games with Jacksonville this year, where he averaged 8.3 yards per punt return and 21.1 yards per kick return.

“He’s an elusive guy,” Packers coach Matt LaFleur said of Ervin. “He’s got some juice. He’s pretty fast. I also like his versatility in terms of being able to add some depth to our running back position. He’s played a little bit in the slot as well.”

Green Bay’s special teams have been a black eye for several years now. The Packers seemed to hit a low-water mark last year under then coordinator Ron Zook, when they fumbled 11 returns, lost five, had three fake punts executed against them and finished 32nd in a statistical comparison of special teams performance compiled by the Dallas Morning News.

But not even Green Bay’s miserable 2018 special teams units set an NFL record for ineptitude — something the 2019 Packers have four weeks to avoid.

“I keep saying this every week … hopefully we get a couple good returns and get on the plus side,” Mennenga said. “You hit a 25-, 30-yard return, all of a sudden, 10 opportunities, you’re talking 3 or 4 yards per return, which isn’t good enough but suddenly you’re not last in the league and you move up.

“That’s something that we don’t want to have hanging over us. The guys understand that. But it’s not a deal where I’m going to lose a bunch of sleep over it at night and stuff. I see what we’re doing. I see that we’re doing better. It’s just a matter of time. We’ll get it fixed.”

The Experience This! Show – The Self-Reliant Entrepreneur

There Is Something Fishy Going On With Bread…

Kyle Kuzma’s Days With The Lakers Could Be...