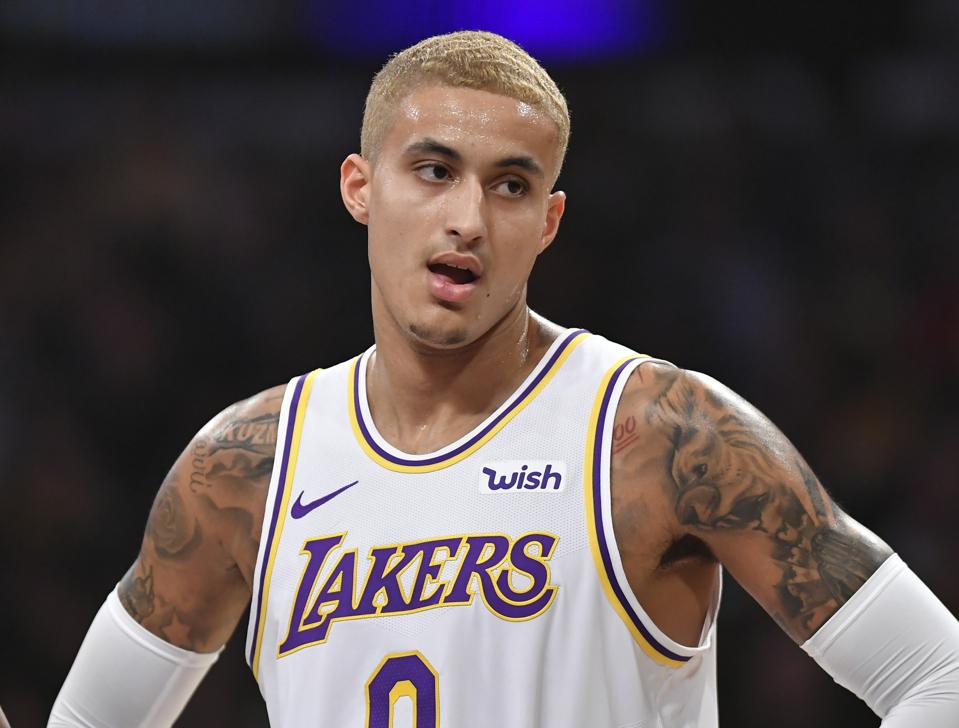 Kyle Kuzma may be the next big trade piece to get the Los Angeles Lakers the talent they need to win … [+] a title. (Photo by John McCoy/Getty Images)

Another year another round of incessant Lakers trade rumors, this time centered around Kyle Kuzma.

Now the fact that it’s the new year means a couple things. Resolutions are getting annihilated everywhere. And it’s NBA trade season, which will again star LeBron’s Los Angeles Lakers.

This time around, despite being 29-7 and holding a four-game lead in the west, L.A. is still one of the hotter topics as pertains to trade rumors.

The latest comes by way of Marc Stein who explained, via Twitter on Monday, that the Sacramento Kings were one of several teams to inquire about Kyle Kuzma.

The great thing about this time of year is that you can read anything into a tweet like that. If you look at it a certain way, with phrases like “know they would have to” and “for starters” you would think that the Kings were ready to hand over the franchise just for a sit down with Kuzma.

The reality is the Kings are interested because they want something for Bogdan Bogdanovic, a 27-year-old who can shoot but will also be heading into free agency. With a $16 million cap hit on any qualifying offer, the Kings are set to bid adieu to Bogdanovic.

Kuzma is cheap but talented, just a season removed from averaging 18.7 points per game. And, as he is making $2 million this year and $3.5 million next, he fits ever so nicely on any roster.

So it makes sense that the Kings would inquire about a natural scorer who can be on the payroll for cheap.

It also makes sense that the Lakers would listen to offers because while he has been hampered by injuries, Kuzma hasn’t exactly been the epitome of consistency this season and is averaging nearly seven points less per game than he did last season. And his 23.5 minutes per game are about 10 minutes shy of what he was asked to do in his previous campaign.

The Lakers are not getting Kuzma at his best. Whether it’s getting too many plays with a stunted second unit, health or overall poor fit, he hasn’t yet arrived fully this season.

With that said, there were some follow-up reports that surfaced after Stein’s tweet.

Jason Jones tweets out that the Kings will live with their financial fate if they have to.

And Heavy.com’s Sean Deveney reports that “the notion of the Lakers pulling the trigger on a deal for Kuzma is still a long way off.”

An unnamed general manager tells Heavy.com that the Lakers asking price would be steep: “a high rotation player… as well as a first-round draft pick that projects to be in or around the lottery.”

Perhaps some of that could be teams putting some of the toothpaste back in the tube. Or it could be that there really is very little fire to a Kuzma trade at this time.

What’s clear is the Lakers are about a year removed from a trade they absolutely had to make in acquiring Anthony Davis.

The best part in the latest merry-go-round of the rumor mill is the Lakers absolutely don’t have to do anything.

Yes, Kuzma has ranged from promising to shockingly bad this season. Much of that has to do with his fit on a team stuffed with forwards and minutes with a second-unit that isn’t exactly hitting on all cylinders.

He’s still a player that can get you 20 points a night when healthy. And, as a reminder, it’s still early in the season.

Kuzma can find a foothold and discover his touch. Then the Lakers, already a first-place team, would have someone who can maintain the lead when Davis and James go to the bench.

The obvious hiccup to any trade would be Kuzma’s paltry contract, which means the Lakers would have to get creative in who they can package and what they can get in return.

Thankfully, they can wait patiently, continue to rack up wins and see if a deal blows them away. Such as one that would land them a player like Bogdanovic, who is shooting 38.3% from three.

Or, as is far more beneficial, they can wait for a player like Darren Collison to just fall into their lap.

The Lakers are starting the year with that useful win-win scenario that’s always nice to have.

BTS’s New Album Has Outsold The Rest Of...

The Holidays Are Here. Is Your Online Business...