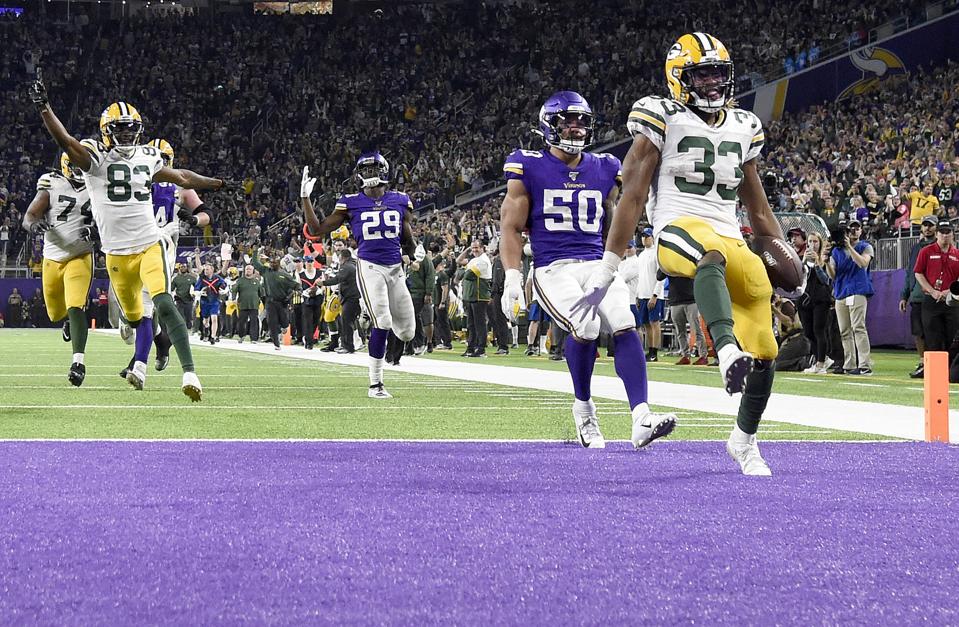 Green Bay running back Aaron Jones had a pair of second half touchdowns in the Packers’ 23-10 win … [+] over Minnesota.

The Green Bay Packers’ warts have been well-documented.

There’s not a reliable No. 2 wideout. The tight end group is subpar.

Special teams have been suspect. The defense has been spotty.

Don’t look now, but this imperfect football team just keeps winning and is in the midst of a magical season.

Green Bay toppled host Minnesota, 23-10, Monday and improved to 12-3 on the year. The Packers clinched their first NFC North title since 2016 and moved into the No. 2 seed in the conference.

Minnesota (10-5) had already clinched a playoff spot, but will now be the No. 6 seed.

Here’s the good, bad and ugly from Green Bay’s win over the Vikings.

THE DEFENSE: There were times on Monday where it looked like the Packers were playing with 15 defenders, as Green Bay smothered the Vikings all night.

Vikings quarterback Kirk Cousins, looking to make a statement in a prime-time game, was just 16-of-30 for 122 yards with a touchdown and an interception. Cousins is now 0-9 in his career on Monday Night Football.

Minnesota managed just 57 rushing yards and averaged only 3.6 yards per carry. And Green Bay played its finest defensive game since a 10-3 win over Chicago in Week 1.

ZA’DARIUS SMITH: In the last quarter century, Green Bay’s top free agent signings have been defensive end Reggie White and cornerback Charles Woodson. If Smith keeps playing like he has in 2019, he’ll be in the discussion with those two all-time greats.

Za’Darius Smith now has a career-high (13.5) sacks and a team-best 50 quarterback hits.

“I think the whole (Pro Bowl) voting process is flawed and needs to be reviewed,” Bakhtiari said. “It makes me unsettled. The best player on our team didn’t even make the Pro Bowl this year.

“He’s come in and been an unbelievable football player and I know how it feels. I’ve been in that situation before and I just hope he gets the All-Pro recognition that he deserves.”

AARON JONES: Stop us if you’ve heard this one before.

Jones was terrific and a huge reason the Packers won in one of the NFL’s toughest road venues.

Jones had 23 carries for 154 yards and two second half touchdowns to spark Green Bay’s struggling offense.

Jones now leads the NFL with 16 rushing touchdowns. That total is also the second-most in franchise history, behind only Jim Taylor’s 19 touchdowns in 1962.

OWNING THE NFC NORTH: The Packers improved to 5-0 in the NFC North, a big reason they clinched the divisional crowd.

The formula is pretty easy: win your division games and you’ll be in the hunt for a divisional title. Green Bay proved that again in 2019.

AARON RODGERS: Green Bay’s quarterback struggled with accuracy much of the night and finished 26-of-40 for 216 yards. Rodgers didn’t throw a touchdown and threw his first interception since Oct. 14.

Rodgers isn’t doing anything to dramatically hurt the Packers. He just isn’t making the kind of ‘wow’ plays Packer Nation has grown accustomed to.

It stands to reason that as the playoffs roll along, Rodgers will have to return to his old form for Green Bay to make a Super Bowl run.

RED ZONE OFFENSE: Green Bay entered the game ranked No. 2 in the league in red zone offense, scoring touchdowns on 68.9% of its trips inside the 20-yard line. Against Minnesota, though, the Packers scored on just 1-of-3 trips into the red zone (33.3%).

One Green Bay drive died at the Minnesota 15-yard line when Rodgers missed Geronimo Allison on a third-and-5. The Packers also drove to the Vikings’ 1-yard line late in the first half, and that drive stalled when Rodgers threw behind Davante Adams on a sure-fire touchdown.

BALL SECURITY: The Packers entered the game second in the league in turnover differential at +14. Green Bay then committed three turnovers against Minnesota and forced one takeaway.

On the Packers’ third play of the game, Aaron Jones fumbled and Minnesota’s Eric Kendricks recovered. That led to a 23-yard Dan Bailey field goal.

Three series later, Minnesota safety Anthony Harris undercut a pass for wideout Davante Adams and intercepted a Rodgers pass. That was the first interception by Rodgers since Week 6, a streak of 277 passes.

Then late in the first half, Adams caught a slant across the middle for 18 yards. Safety Harrison Smith stripped the ball loose and Kendricks recovered again.

Later, tight end Jimmy Graham fumbled the ball on his lone catch of the night. Fortunately for Graham, though, teammate Geronimo Allison recovered the ball.

Punt returner Tyler Ervin also muffed a punt that he recovered himself.

Christmas is still more than a day away, but Green Bay was remarkably generous Monday night. Fortunately for the Packers, they survived their early comedy of errors.

What Does Jeff Green’s Waiver Mean For The Utah Jazz?

Google May Be Working On An All-In-One Business...

How Lingerie Label Myla Navigated The Lingerie And...