The Pros And (Yes) Cons Of Sam Darnold Going Forward 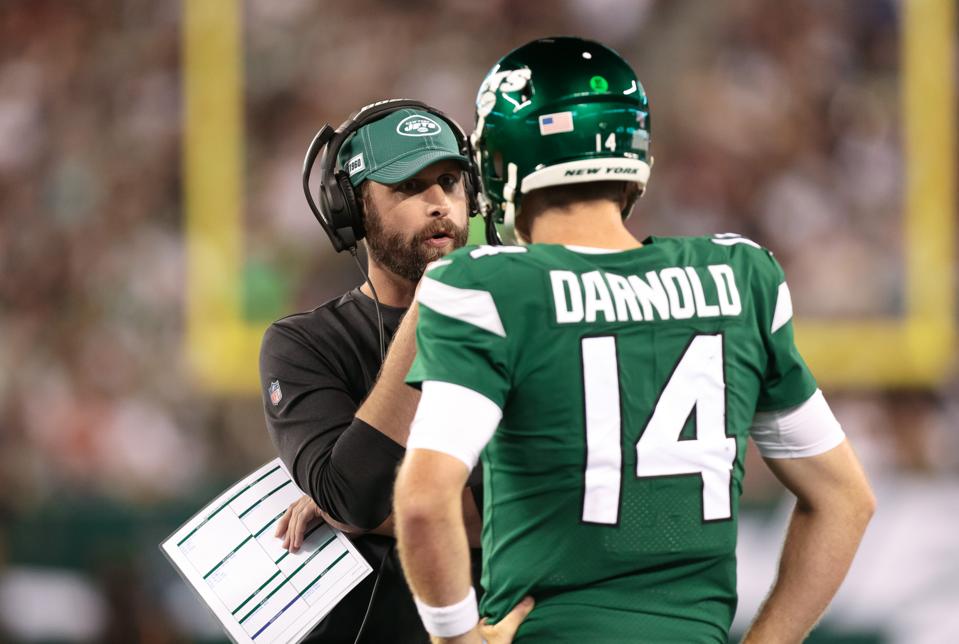 Tom Brady’s potential departure from New England already has New York Jets fans dreaming of the day when they won’t see No. 12 in blue and annually crushing their dreams of an AFC East title.

But if and when Brady finally does leave the Patriots, will the Jets have a quarterback who can take them to the to next level? They believe Sam Darnold is that guy, but is he? Let’s take a closer look at Darnold’s second season as a pro in comparison to his first year.

Darnold improved in every meaningful statistical category as a passer in 2019, including passer rating, completion percentage, yards, touchdowns and fewer interceptions. (He also had no pick-sixes after throwing two in 2018.) Interestingly, he again started only 13 games. In his rookie season, he missed three contests from Nov. 11-Dec. 2 because of a foot injury. In Darnold’s sophomore campaign, he sat out three games from Sept. 16-Oct. 6 due to a bout with mononucleosis.

“It felt like he was very consistent here at the end,” Jets coach Adam Gase said in his season wrapup news conference. “(I) thought he did a good job with really kind of honing in on specific things he wanted to work on and got better at those things. He did a good job protecting the football, we cut the turnovers way down and I think we’ll make a lot of strides in this offseason with some specific things that we’re going to kind of put together.”

One of Darnold’s attributes that Gase and offensive coordinator/quarterbacks coach Dowell Loggains have lauded is his ability to make big pass completions while out of the pocket. However, Gase would like to see him get better at finding secondary targets while he still is in the pocket.

“There have been times,” Gase said a day after the season finale, in response to my question, “where we’ve talked through that—get off (option) one, go to two or three, get to the checkdown from the pocket. I think that’s something that we’re going to keep working on, that’s something that we can get better at. I think sometimes he’ll go to escape the pocket on his own instead of working through the progression, that’s sometimes what a young quarterback will do.

“I do think there were times where he did do a good job of staying in there,” Gase added, “and working through his progressions in the pocket but that’s something that we can definitely work on this off-season.”

A case in point was a pass Darnold threw in the first quarter in Week 16 against Pittsburgh that would have been intercepted by Joe Haden if intended receiver Vyncint Smith had not done a good job of playing defender. Smith was bracketed by two Steelers. Gase chastised himself for a bad play call when asked about it by reporters, but the fact is, Darnold should have looked elsewhere or thrown the ball away.

Another thing Loggains and Gase want to see improvement from in Darnold is in his footwork. In a strange way, it’s impressive that Darnold upped his completion percentage from 57.7 as a rookie in 2018 to 61.9 this past season despite not always having his feet set, sometimes using mostly his upper body to make the throw.

“It’s not as consistent as we’d like,” Loggains said late in the season of Darnold’s footwork. “He’s done a nice job. It’s gotten better. When you ask someone to come in and things change and do things, it’s something that as you play, his play has gotten better. There are still some things we can clean up though. It’s trending in the right way for sure. But, there are definitely still areas we can improve.”

After transitioning from offensive coordinator Jeremy Bates to Gase and Loggains in his sophomore NFL season, Darnold will not have to learn a new system for year three.

Gase called that “huge,” adding, “It’s a big deal when you’re going into the spring and you’re not learning a bunch of new things. You’re trying to get better with more of your technique, fundamentals, the verbiage in the offense and all those types of things. You kind of know those, by heart and that’s where you can make a lot of strides.”

This is the year when a team wants to see major growth in a player. Darnold, in year three of his rookie deal, still has a relatively inexpensive cap figure of $8.249, per overthecap.com. After the 2020 season, the Jets must decide whether to pick up his fifth-year option. Barring something unforeseen, it seems like a slam dunk right now.

Make no mistake, whatever you think of Adam Gase, the New York Jets’ management has entrusted him with the development of Sam Darnold as a quarterback. And Darnold’s performance will carry a lot more weight toward Gase’s eventual fate than public opinion or alleged burner accounts.

The Real Reason Behind Bitcoin And Crypto’s $50...