All the supercar tropes seem to be accounted for on the sleek T.50. Wait, what’s that thing on the … [+] back?

Gordon Murray Automotive in the U.K. has some ideas about how to increase downforce for a hard-charging supercar such as their new $2.6 million T.50, and they’ve made it as plain as the turbine exhaust on the Batmobile – by adding a large fan to the back of the car. Of course, it’s a bit more complicated than that. 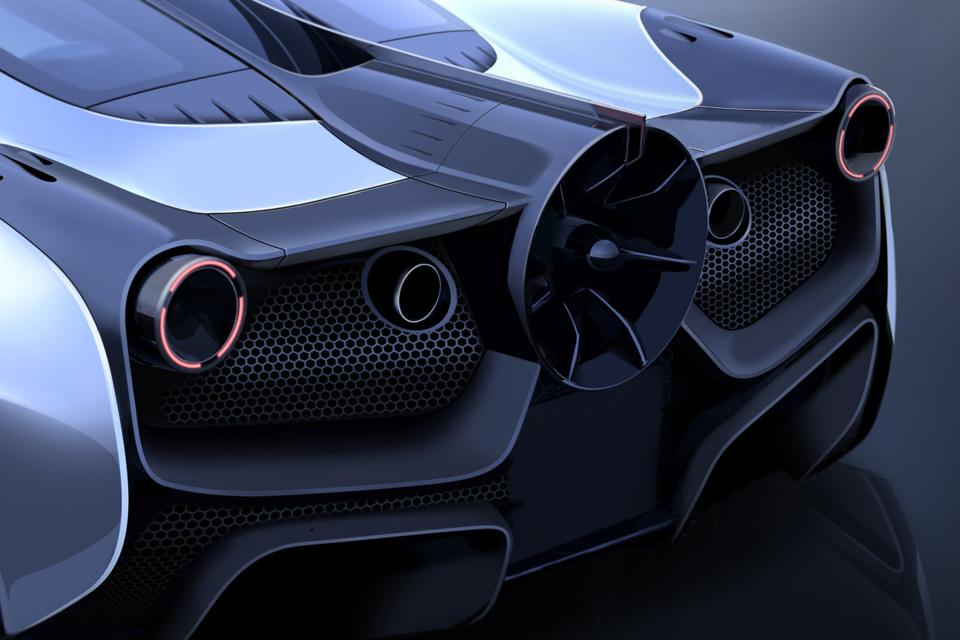 The fan’s output doesn’t ‘propel’ the car as much as it alleviates a bit of backpressure drag, but … [+] every little bit helps.

Gordon Murray has been down this road before with the Brabham BT46B “fan car” (see video below) in 1978, driven in part by racing icon Niki Lauda. It used similar Murray-designed downforce technology to great effect, so much so that Brabham’s F1 competitors pushed to immediately outlaw it since it clearly gave the car an enormous advantage on the track – Lauda won the only race the car was ever in by over 30 seconds. However, the main idea behind both the old and new car is this: Use suction to reduce drag and increase downforce, and the car will go faster and handle better. A large fan and some strategic ducting under the car can create the desired effect, but where to put it? Out back still seems to be the most logical location. On the BT46B, the fan was 18 inches across and spun at 8,000rpm. Murray’s press release did not specify the T.50’s fan specs, but we would assume 40-plus years of engineering advances mean it will handily outperform the 1978 version.

The effect the fan has on the T.50 is well understood. Additionally, if you can then pump that same air into the area generating drag behind the car, you can fill in some of the low-pressure zone behind the vehicle as it moves through the air and lessen the “pulling” effect of drag, which increases the faster you go. Every little bit helps as the numbers climb. 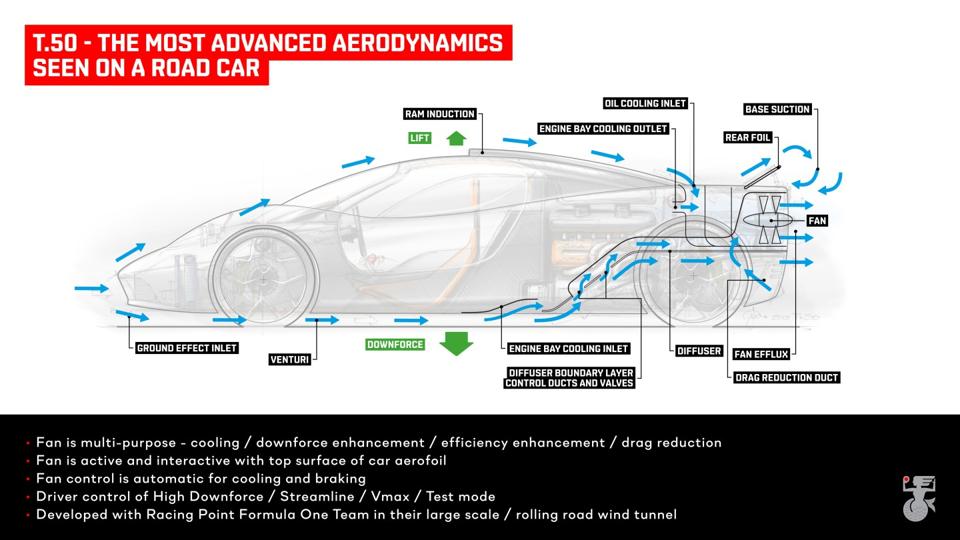 The path of air around and through the T.50 is… complicated.

Another way to cheat the wind and generate downforce is with wings/dams/spoilers and such, or by implementing a non-standard idea like the admittedly gorgeous and tech-heavy McLaren Hyper-GT Speedtail, the design of which, surprise, came from the minds of Gordon Murray’s automotive and design houses. Before the Speedtail, Mr. Murray also had a hand in designing the shape of another McLaren icon, the seminal F1, which nearly touched 250mph back when most supercars struggled to push past 180mph. So it’s not like anyone should be surprised Murray went in this direction for the sleek T.50. Also, like the F1 (and the Speedtail), the new T.50 will seat three with the driver centered up ahead of the wide-eyed passengers. In a press release, the company says they will partner with the Racing Point Formula One Team during the development and testing of the T.50. Once the T.50 is up and running, Murray says more cars should be expected.

Powering the T.50 will be a non-turbo Cosworth V12 that will sing to a tick over 12,000rpm, a rarified performance region usually occupied by smaller-displacement performance motorcycles and full-on race cars. Adding some more punch under certain driving and aero modes (there will be six to choose from, including one called Vmax) will be an electrical assist from the car’s generator and when up to speed, a ram-air system will pressurize the air intake. All told, there will be 700hp on tap at full dance, which is less than the lump powering a Dodge Challenger Redeye, but the T.50’s V12 only has to push about 2,100 pounds of car down the street (or track), and don’t forget the aero bits, so expect some angry numbers once some lead-footed drivers get ahold of the 100 T.50’s being built (buy yours here).

Top speed? With “only” 700 ponies but all that active aero tech hard at work, it’s tough to say where the speedo will stop, but the cornering capabilities should be off the charts. The T.50 doesn’t seem to be looking to take on the Bugatti Chiron and friends, it’s more of a very expensive rolling statement of scientific principles. Still, we’re looking forward to seeing it – and hearing it – do its fan thing come May of 2020.

Three Simple Habits That Will Help You Stick...