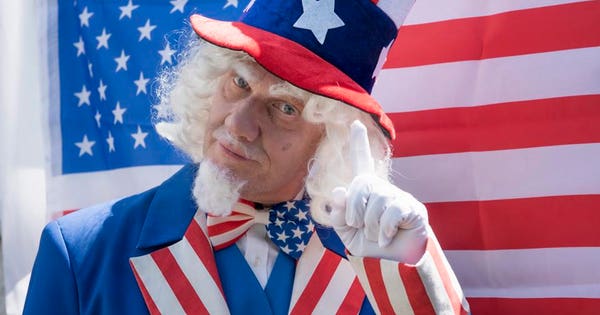 Portrait image of a man dressed a Uncle Sam. Standing in front of an American Flag.

Unfortunately, it’s that time of year again. That dreaded time that sneaks up on you no matter how much you hide under the covers.

It’s tax season. Which means, if you invest or have ever thought about investing in real estate investment trusts, or REITs… you’ve got plenty of questions to answer and be answered.

As the REIT structure is inherently a tax-code creation, these questions are inevitable. Yet investors are generally pleasantly surprised with the answers, as REITs are more tax-friendly than many assume.

But I think I can change your mind by the end of this article.

For one thing, since their creation in 1960, REITs have always seemed to be in the government’s good graces – both with legislators and tax authorities. Under the goal of democratizing real estate investing for the masses, REITs enjoy significant tax advantages. This includes avoiding double taxation that’s always somehow passed through to the end-investors.

Investors often assume this must come with additional tax complications. But, believe it or not, that’s generally not the case.

From a tax reporting perspective, an investor’s experience with REITs shouldn’t be any different than a typical dividend-paying stock. Admittedly, at the company-level, it does get a bit more complex.

But investors? We don’t have to worry about that.

Myth 1: REITs Are A Tax Headache

Fact: Taxes are always a headache. But REITs are no more so than a typical dividend-paying stock.

They both report distributions at the end of each year on the standard Form 1099-DIV. So, to answer that one question up above – unlike MLPs or interests in partnerships or LLCs – REITs do not require K-1’s or extra paperwork.

Around this time each year, REITs announce the tax characteristics of their prior year’s distributions. These can also be found on each company’s websites. And REIT advocate NAREIT maintains its own updated historical record of the allocation breakdown of REIT distributions.

Regardless, investors needn’t seek these out. Brokers automatically aggregate that data on one’s 1099-DIV along with distributions from other dividend-paying stocks.

For tax purposes, REIT dividend distributions are heavily weighted to ordinary income – the majority of which qualifies for a 20% deduction – with the balance coming from capital gains and return of capital. And both of those are typically taxed at lower rates.

Since 1995, roughly 70% of REIT distributions have been classified as ordinary income. Fifteen percent has been considered capital gains, and 15% has been called return of capital.

While all that may sound complicated, the key takeaway should be that the hard work is largely done behind the scenes. Investors themselves usually have a simple 1099-DIV report to punch into Turbo Tax or hand to their tax accountant.

Though that reassurance does beg the follow-up question of, “Yeah, but are REITs tax-efficient?” In which case, let’s tackle that next.

Individuals are now permitted to deduct up to 20% of ordinary REIT dividends. That provides a slight reduction in tax rates while simultaneously amounting to an after-tax savings of 25%.

TCJA reduced the effective top marginal rate on ordinary REIT dividends – the bulk of typical REIT distributions – from 39.5% to 29.6%.

Before it passed, we generally advised RIA clients to hold REITs in tax-advantaged accounts whenever possible. Most investors were paying significantly higher effective tax rates on REIT income than on qualified dividends.

In the simplified example below, we illustrate how an investor with an indefinite ROC deferment would pay effectively the same rate on REIT income as qualified dividends.

It’s a leveled playing field now though, making REITs suitable for ownership in either a taxable or tax-advantaged account.

That’s awesome, right? Yet, once again, this brings up another question: Aren’t REITs income-oriented investment vehicles with limited growth potential?

As it turns out though, that’s another myth.

Fact: At the company-level, REITs are able to retain significantly more capital than commonly believed… which has been a primary source of their underappreciated historical record of strong growth.

While REITs may have been pure income plays decades ago, they’ve since evolved into dynamic, growth-oriented operating companies.

Hoya Capital Real Estate contributed to this article and the company also advises an ETF. Information presented is believed to be factual and up-to-date, but we do not guarantee its accuracy.

This report is not intended to serve as legal, tax, or other financial advice related to individual situations. Because each individual’s legal, tax, and financial situation is different, specific advice should be tailored to the particular circumstances.