Three Things To Know About The Bucks At The Halfway Point 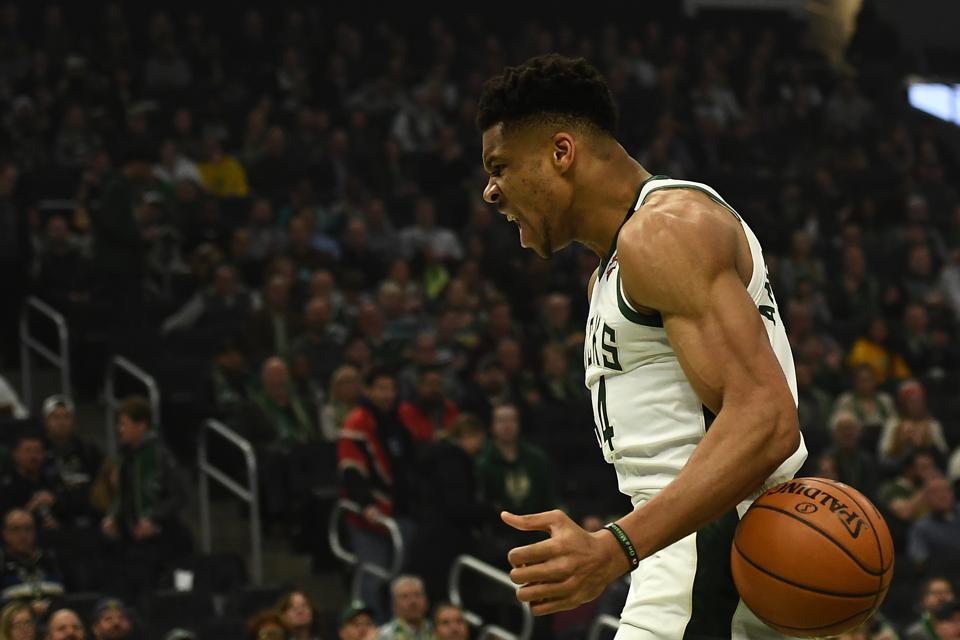 MILWAUKEE, WISCONSIN – JANUARY 14: Giannis Antetokounmpo #34 of the Milwaukee Bucks celebrates a … [+] dunk against the New York Knicks during the first half of a game at Fiserv Forum on January 14, 2020 in Milwaukee, Wisconsin. NOTE TO USER: User expressly acknowledges and agrees that, by downloading and or using this photograph, User is consenting to the terms and conditions of the Getty Images License Agreement. (Photo by Stacy Revere/Getty Images)

With 42 games under their belt, the 36-6 Milwaukee Bucks are just past the halfway point of the NBA season in terms of games played. And it couldn’t have gone any better.

Milwaukee has thoroughly dominated the competition throughout the first three months of the season and has rarely been challenged. If you tune in to a Bucks game on any given night, you’re most likely to see them leading by 20 or more points than any other margin. The few losses they have suffered have mostly been a result of incredible shooting performances by their opponents.

Despite their incredible record, the Bucks still have their critics. There are audible whispers about whether this team is built to dominate the regular season and fail in the playoffs. That seems a bit premature after the only postseason run with this version resulted in a trip to the Eastern Conference Finals.

Regardless, there are reasons to be concerned. Can head coach Mike Budenholzer make timely adjustments in a tight series? Do the Bucks have enough shooting around Giannis Antetokounmpo to make the opposing team pay when they wall off the paint? Will Eric Bledsoe disappear in the playoffs again? Those are questions that can only be answered in the postseason.

While we continue to enjoy the Bucks as is, let’s take a look at three things you should know about this current team:

Fastest In The Country

The Bucks love to get out and run, and they’re at their best when doing so. They lead the league by only averaging 13.37 seconds per possession (slightly quicker than the Houston Rockets).

To be able to push the ball, the Bucks must first concentrate on securing the defensive glass, an area they excel in. Budenholzer constantly preaches the importance of defensive rebounding and general manager Jon Horst has brought him the players to be successful. Not by accident, their 76.8 percent defensive rebounding rate ranks first in the NBA.

After the boards are secured, athletic freaks like Bledsoe and Antetokounmpo lead their team to the races. Both players shine in the open court when they’re able to use their supreme blend of quickness and strength to apply heavy pressure on a discombobulated defense, usually resulting in success for Milwaukee.

Going Against The Grain

In a league where three-point shooting is all that and a bag of potato chips, Budenholzer has surprisingly built his defense from the inside out. Although he’s not happy with giving up three after three, he has prioritized protecting the basket at all costs.

Brook Lopez was the major addition last season in order to make Budenholzer’s scheme a reality. The seven-footer has been one of the best rim-protector’s over the past two seasons and almost rivals the likes of Rudy Gobert at that end of the court. He and Antetokounmpo provided a terrifying one-two punch if any offensive player thought twice about getting into the paint.

As if that duo wasn’t enough, Milwaukee signed an extra layer of security last summer in the form of Robin Lopez. Lopez has insured they have the ability to roll out 48 minutes of non-stop, physical defense down low.

The defensive strategy has worked to perfection once again. A year after allowing their opponent’s to shoot the fewest percentage of shots within four feet of the rim and give up the lowest success rate, the Bucks have improved in each of those categories this season. It’s resulted in the stingiest defensive team in the league for the second-year running

As mentioned previously, the Bucks have blown away their competition. They’re a pretty good, but not great, 9-5 against above .500 teams. However, they’ve feasted on lesser competition—winning 27 of their 28 games against below. 500 teams.

No matter which way you sliced it, they’ve dominated in just about every fashion whether it be at home (19-2), away (17-4), within their division (10-0) or their conference (21-3). Thus is life when you’ve only lost six games in three months.

It’s all added up to a HUGE lead in the Eastern Conference Standings. Heading into Wednesday’s slate, the Bucks hold a seven-game lead over the second place Boston Celtics. According to my research on basketball-reference, that’s the largest lead a team has held in either conference at this point in the season since way back in 2006 when the Detroit Pistons (29-5) held a seven-game lead over the Miami Heat (23-15).

The Bucks’ schedule gets a bit more difficult between now and the All-Star break. Over the next four weeks, they’ll play the Celtics, Brooklyn Nets, Denver Nuggets, Philadelphia 76ers and Indiana Pacers. We’ll see if they can continue their dominating regular season run.

‘Ford V Ferrari’ Is The Perfect Film With...