Michelangelo’s sixteenth-century marble David sculpture in Florence, Italy, is more than twice the size of an average person. Now, a Swiss electronics lab has recreated the statue out of copper, and no larger than a poppy seed. 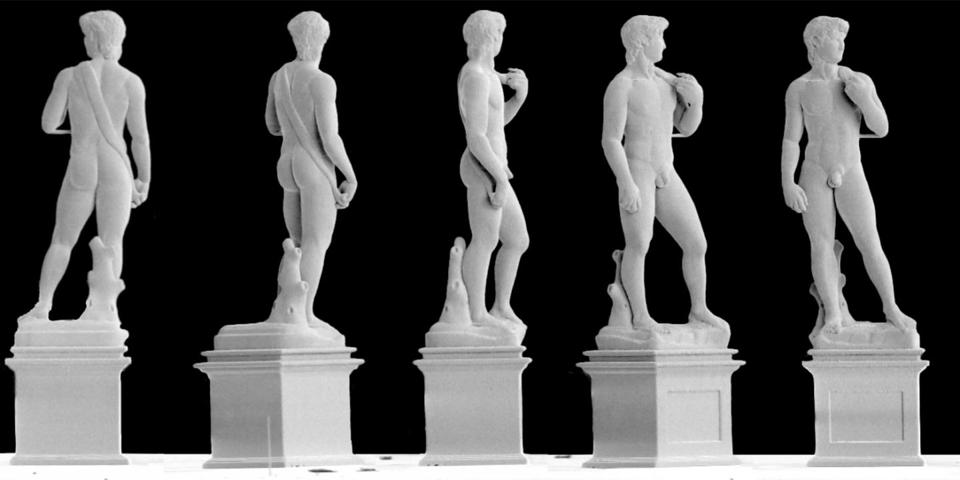 Different views of a 3D-printed miniature David (1 mm high) made of pure copper.

This miniscule replica of the Renaissance masterpiece is the work of Giorgio Ercolano from Exaddon, in collaboration with the research group of Tomaso Zambelli from the Laboratory of Biosensors and Bioelectronics at ETH in Zürich, Switzerland. They published the details of their efforts in the journal Micromachines earlier this month.

Exaddon was founded earlier this year as a spin-off from a company specialising in scientific measurement tools. The main focus of Exaddon is 3D-printing metal at a very small scale, and this Michelangelo mini-sculpture is essentially a proof-of-principle of the technology they use to print small metal components. They collaborate with groups in industry and research institutes who need custom small and detailed metal components for different applications.

The technology, first developed at ETH in Zambelli’s group, uses an electrochemical process to carefully deposit drops of a metal solution to build up the structure layer by layer and create a high level of detail in the final printed object.

To demonstrate how much detail they could achieve at the micrometer scale, Ercolano used an open source 3D model of Michelangelo’s David and scaled it down to 1:10,000 and 1:70,000. The largest of the two miniatures comes in at under one millimeter – a bit smaller than a poppy seed. The even tinier one is one tenth of a millimeter. The larger of the two tiny statues is recognizable as David, but while the outline is still visible in the even smaller version, it’s losing many of its details at that scale.

Replications of famous artworks are often used in demonstrations of microscale and nanoscale printing technologies by showing that the technology can reliably print something recognizable. In 2017, researchers recreated a small version of Da Vinci’s Mona Lisa painting out of self-assembling DNA, to show that this was a technology that could be used to direct DNA into specific structures on demand. Mona Lisa is a popular test subject for printing technologies, and in 2013 she was also used to demonstrate a new method that could reproduce images at 120,000 dpi.

It might seem frivolous to print a tiny Mona Lisa or a miniature David, but by using famous images, developers of these technologies are showing that it can print any detailed structure — an ability that’s usually relevant to the technology’s intended application.

In the case of Exaddon’s miniature metal 3D-printing technology, the final application is not to make miniature replicas of Renaissance masterpieces, but to improve the electronics industry. This method could be used to repair microelectronics, for example. And thanks to the tiny David, we know that it can do a very precise job.

Wild One: How This Pet Lifestyle Brand Stands Out From The Pack

The Bullish Case For Stocks, And What Pre-Retirees Can Do About It

Supermoon: Exactly When You Should Look At This...