Trade Deal: A Reason To Buy? 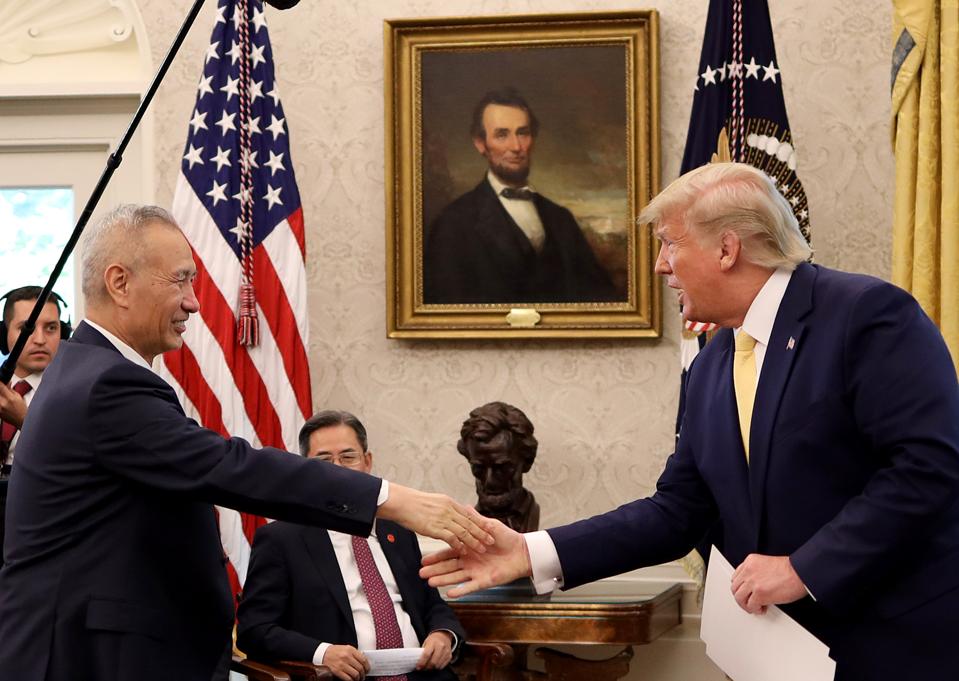 It’s been another solid week for the stock market, as positive comments on the trade deal gave stocks a further boost last week. The market’s strength since the October lows has moved nearly all of the market sectors sharply higher.

There are of course still some questions to be answered, as no details have been reported regarding the phase one trade deal. American and Chinese officials are expressing hopes that something will be signed in January. The new tariffs that were scheduled to be going into effect this weekend have been canceled, but I doubt we have seen the last of trade-related volatility during U.S.-China trade negotiations.

For the week, the Nasdaq 100 (NDX) led the way, up 1.14%, followed by a 0.74% gain in the S&P 500. After that, the Dow Jones Transportation Average did slightly better than the Dow Jones Industrial Average, but all six market averages closed the week higher. 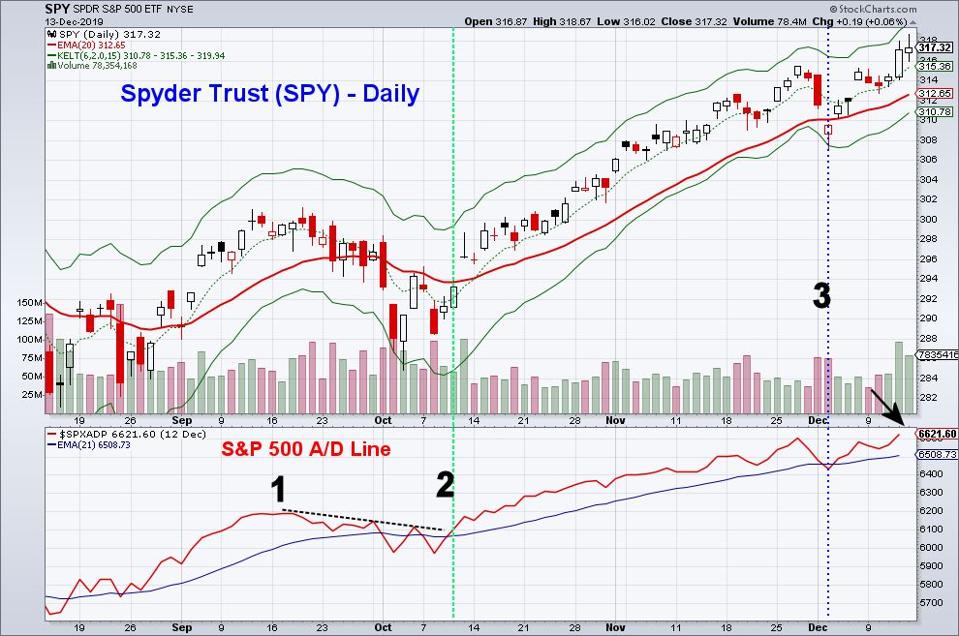 The S&P 500 A/D line has only spent one day since October 10th below its Exponential Moving Average (EMA), and that was on December 3 (line 3). On that day, the SPY dropped below its starc- band and reached its monthly pivot support, as I discussed last week. The A/D line made another new high on Friday, which reinforces the positive trend.

While the major indices have had impressive gains, many stocks have done even better. Apple Inc. (AAPL) was the most overbought Dow stock in last month’s review. 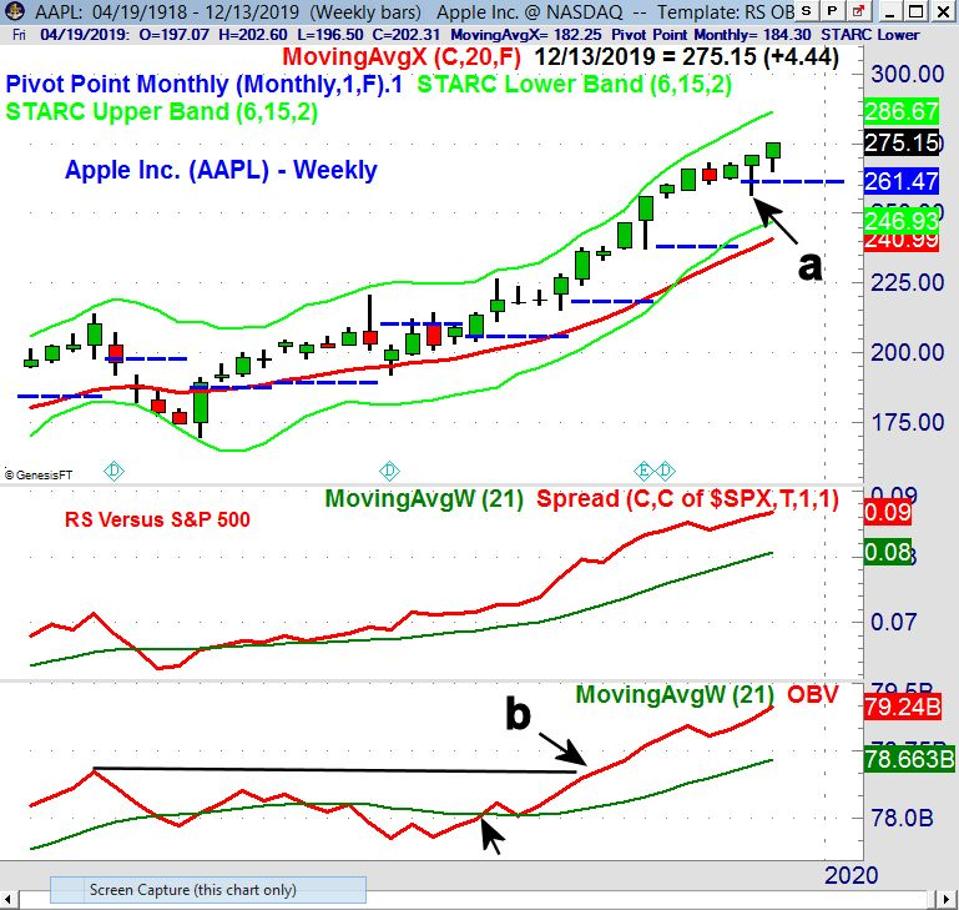 As noted then, the monthly technical studies were strong and showed no signs of a top. AAPL gained another 1.6% last week, and is up an astounding 76.4% YTD. AAPL dropped below its monthly pivot at $261.47 (point a) two weeks ago, and had a low of $256.29 before rebounding sharply.

AAPL is now just 4.2% below its weekly starc+ band at $286.67. Its weekly relative performance (RS), which measures a stock or ETF’s performance versus the S&P 500, made another new high last week. AAPL has been above its Weighted Moving Average (WMA) since June, and is therefore a market leader.

Apple’s weekly On Balance Volume (OBV) crossed back above its WMA in September, and then retested the WMA before surging to the upside. The OBV made a new high in October as the resistance was overcome (point c).

Removing the concerns over a trade war helped take some pressure off stocks, but the economic data last week was not that great. The inflation data last week was mixed: a bit higher from the Consumer Price Index (CPI) and lower for the Producer Price Index (PPI). More interesting was Friday’s Retail Sales numbers, which were up 0.2%, well below the consensus estimate of a 0.5% increase. If this is a sign that consumers are cutting back on their discretionary spending, it could be a problem in 2020.

The economic calendar is much heavier this week. We have the Empire State Manufacturing on Monday and the Philadelphia Fed Business Survey, Leading Indicators and Existing Home Sales on Thursday. The week ends with an update on the 3rd Quarter GDP, Consumer Sentiment, Personal Income, and lastly, Consumer Spending. 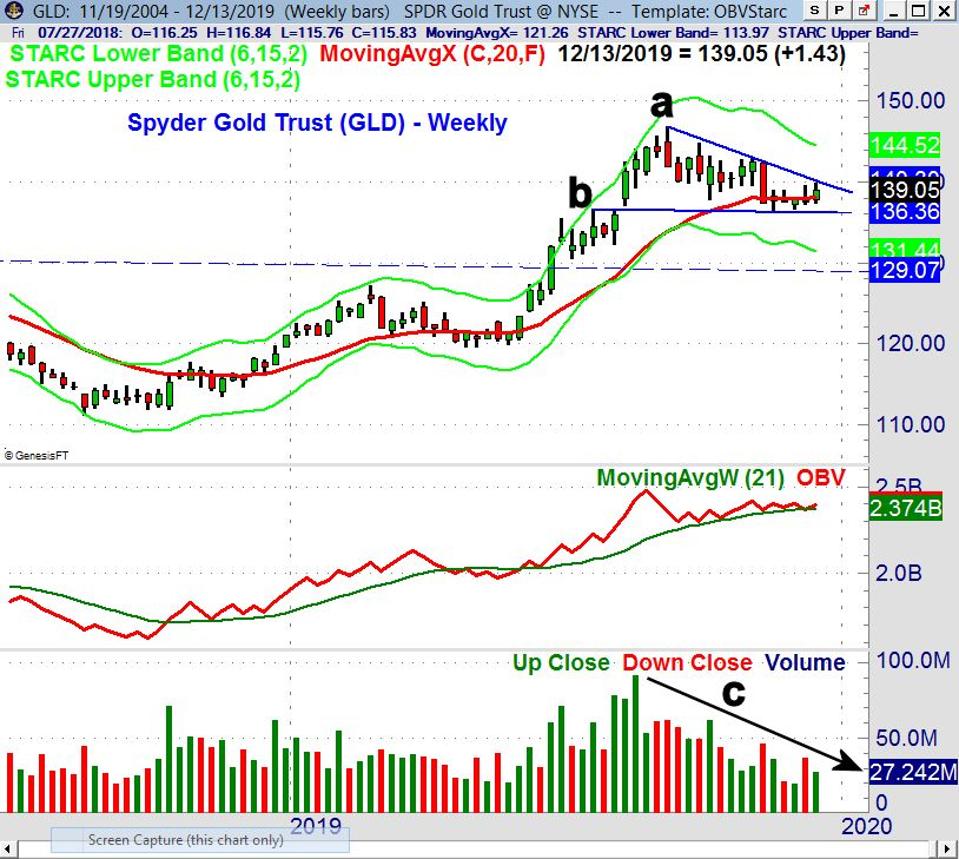 The Spyder Gold Trust (GLD) managed to close up just over 1% last week. This was the first close since early November above the Quarterly Pivot at $138.75. The decline from the September high of $146.82 has lasted fourteen weeks. Bloomberg reported in early November the largest outflow from GLD since 2016.

This is a typical development in a continuation pattern, which is a pause in the major trend. The weekly chart shows a flag formation (lines a and b). A weekly close back above $143.25 will project a move to the $154-$156 area. The weekly volume has been declining as GLD has moved lower (line c), but its OBV has stayed positive and above its rising WMA.

I would not be surprised if there were a few choppy days as we head into the holidays, as a trade deal may already have been priced into the market by investors. This may cause some to take profits on new trade deal news. There are also likely many professionals who have become immune to trade news, and are unlikely to establish new positions until a trade deal is fully negotiated and signed.

However, with only 68% of the S&P 500 stocks above their 50-day EMA’s, there are still many opportunities in individual stocks.

In my Viper ETF Report and the Viper Hot Stocks Report, I update subscribers with my A/D Market Trend analysis twice each week, along with specific buy and sell advice, for just $34.95 each per month. New subscribers also receive six free trading lessons.