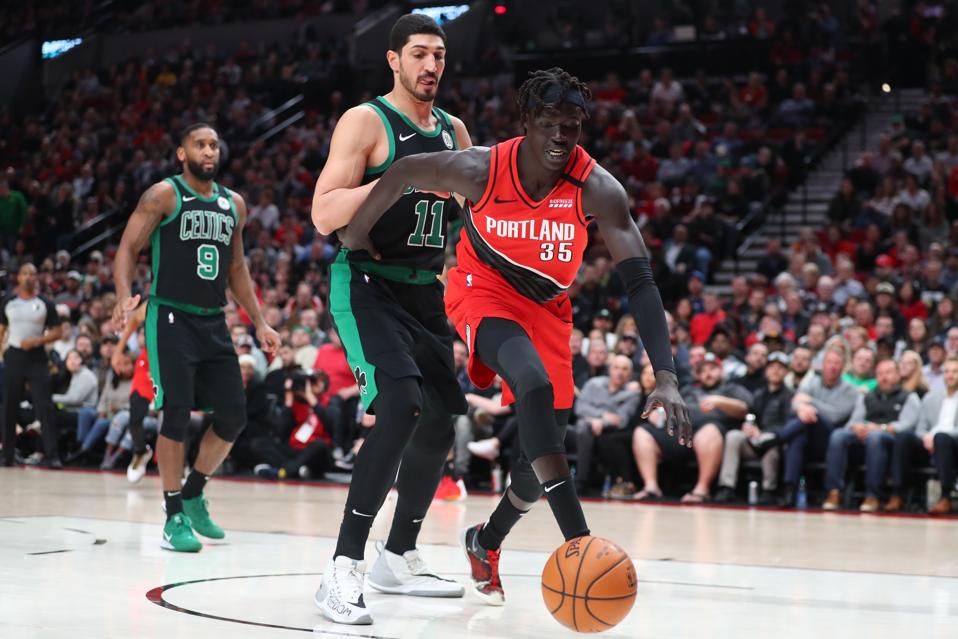 PORTLAND, OREGON – FEBRUARY 25: Wenyen Gabriel #35 of the Portland Trail Blazers reaches for a … [+] rebound against Enes Kanter #11 of the Boston Celtics in the fourth quarter during their game at Moda Center on February 25, 2020 in Portland, Oregon. (Photo by Abbie Parr/Getty Images)

When the Portland Trail Blazers took the court to start the second quarter in their game at Indiana on Thursday, a fan paying close attention might have noticed a bit of a milestone: one of the youngest lineups the Blazers have ever put on the court together in an official NBA game.

They had two players too young to legally drink in Anfernee Simons and Nassir Little, who both are 20. Another, Gary Trent Jr., turned 21 just over a month ago. The other two, Wenyen Gabriel and Caleb Swanigan, are both 22.

The move was unusual for coach Terry Stotts. But Damian Lillard was out with a groin injury, Mario Hezonja out with an ankle issue, plus there were the multiple other injuries that have turned the Blazers into a MASH unit this season, and starting forwards Carmelo Anthony and Trevor Ariza are 35 and 34, respectively. It might have been inevitable that Stotts rolls the dice with a 22-and-under crew.

The youngsters didn’t play together very long, just 3 minutes and 29 seconds, but they did make a positive impact, cutting the six-point lead the Pacers started the quarter with to 33-31 before Ariza re-entered the game for Little.

In a normal season, these players might have spent a lot of time together on the court, but it would have been the practice court, in scrimmages involving young players that have been a staple for the Blazers development. Such players as CJ McCollum, Will Barton, Allen Crabbe, Jake Layman, Zach Collins, Simons and Trent have honed their games in those session, invaluable parts of the Blazers preparing young players who don’t get much playing time preparing for bigger roles.

A big question this season is if throwing a player such as Little to the NBA wolves, when he might have been splitting time between the practice sessions and stints in the G League, will help or hinder his development.

The break in developmental continuity has been one of the big prices the Blazers have had to pay for all the injuries they have endured, and the lack of payoff for off-season acquisitions such as Kent Bazemore and Anthony Tolliver, who were traded; Pau Gasol, who was waived before playing; and Hezonja, who has been inconsistent when not injured.

Trent has blossomed in a role that is larger than might have been intended – he started Thursday’s game in Lillard’s place and scored 20 points. Simons has had his moments, but has been inconsistent and showing need development more defensively. The young players have shown mostly energy and effort, but not much scoring punch and have struggled to defend NBA players. The result has been that Portland’s bench is regularly outscored – on Thursday, the Pacers’ reserves outscored Portland’s 25-14, and it’s been far worse, such as the night earlier in the week when Detroit had a 70-10 bench advantage.

Portland is last in the NBA in bench scoring at 26.6 points per game, and the Blazers give up more bench points per game, 41, than any team in the league. The -14.4 differential means the starters have to carry a heavy load.

The mini-22-and-under experiment may need to see more time to show more positive results, but if Lillard is not back soon, the Blazers might need to go to it again. At 26-34, the Blazers need any help they can get, but with the next six games coming against teams with losing records, the young players could have a chance to make a bigger impact, and more importantly, take some of the burden off the starters.

The 4 Things That Help Small Businesses Get...

How A Little Island In The Caribbean Sea...

Of AJ Hinch’s Suspension, And His Infamous Last...